She wields several metres of extra-thick barbed wire, over which she seems to exert telekinetic control. The main demonstrated uses are :

The second one is doubtful. It may just have been the way the wire was drawn in one panel. But heh, let’s assume she can do it to give her a little extra range.

The Graveyard Faction was hired by a Coral City patron. They were to raid the headquarters of the Movement, a grassroots organisation in a broken neighbourhood. The team was given a jammer to approach unseen. Their orders were to kill a few people then leave.

Prior to the invasion they took down and hospitalised Movement member Mouse. However, the attack was derailed by Movement member Vengeance Moth, who also destroyed their jammer. The GF then ran into her colleague Burden. This allowed other Movement to come in.

The Graveyard Faction was thus forced out by Movement leader Virtue. They then told their employer that they were pulling out of the contract, as the opposition was considerably stronger than indicated.

Anguish and Arson might be siblings, given the resemblance. 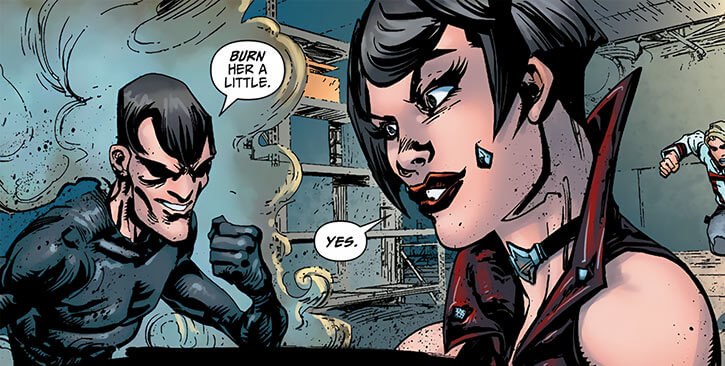 Anguish tries to focus on the job and act professional, but her nature as a bully undermines her. The more the GF runs into pushback, the more she’s likely to go for pointless death, torture and suffering out of ego, frustration and sadism.

She’s clearly the leader of the team, though the others might have to verbally rein her in once she gets on some revenge kick.

“I have a little special message to leave before we go. Maybe I’ll take some souvenirs off this brat, what do you think ? I was thinking a scalp.”

Bonuses and Limitations:
Accuracy is a Powered Skill.