The Ani-Men are a frankly minor team of Marvel Comics criminals. They first appeared in 1965, but have returned with a bestial tenacity.

Their strongest points are :

Full Name:
Originally, “The Organisation”. From there both “the Unholy Three” and “the Ani-Men” have been used by successive rosters.

The 1984 roster may have been simple robbers.

Modus Operandi:
The Ani-Men are usually hired by criminal leaders as special muscle.

Extent of operations:
Traditionally, the Ani-Men are active in the New York City area.

The 2005 roster was active in Wisconsin.

Bases of Operations:
Presumably none, though they may receive quarters from their employers during lengthy engagements. In 1965, that was the Chemco Building, NYC – more below.

Major Funding:
The original setup was that the Ani-Men could keep whatever they stole during operations. They seem to have since switched to billing their services.

Organizational structure:
Leadership is provided by the employer. 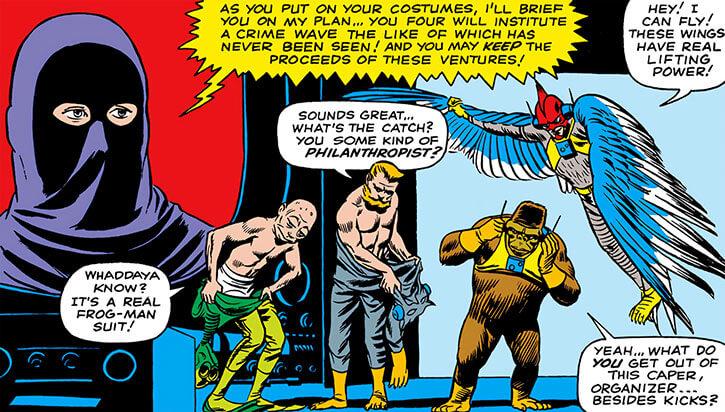 Each Ani-Person is normally equipped with a special suit. They all come with radio, and sometimes video cameras.

Each suit is extensively customised to resemble an animal, and to have abilities evoking that animal.

The Ani-Men costumes seem to have realistic fur and other practical effects making them lifelike. This was somewhat frightening back in 1965, as people unused to such disguises weren’t quite sure what they were dealing with.

As often, some period music for mood… And I’d imagine the Animals released something in 1965, thus making my life simpler… Ah yes, they definitely did.

In 1965, Reform Party Mayoral candidate Abner Jonas became the hooded Organizer. He set up “the Organization”, a cadre of criminal specialists.

These operatives would sap the credibility of the then-current Mayoral administration, and bolster Jonas’.

The Organiser sought specific agents. He even sent his first recruit, Horgan, to free his second — Keefer — from prison.

(At this point the team are the colourful-thugs-with-odd-skills types, which was a popular formula back then. See the Split-Second Squad for another Marvel example. The two distinctive bits for the Organisation’s special operatives are that they are “remote controlled” via radio and cameras, and have weird costumes with themed gadgets).

The Organiser’s plan went well, but soon ran into Daredevil (Matt Murdock). Jonas and his operatives managed to frame Daredevil for a robbery, to hinder him. They also faked attacks on Jonas and the Reform Party, to throw off suspicions.

Daredevil once arrested Cat-Man. The Organiser sent Ape-Man to silence Horgan, by lobbing a grenade onto him through a precinct house window. But Daredevil derailed that attack. He then captured Frog-Man, and stole his costume.

Using the camera in the Frog-Man costume, DD exposed the Organisation. He defeated Ape-Man and Bird-Man, and proved that Jonas was the Organiser. 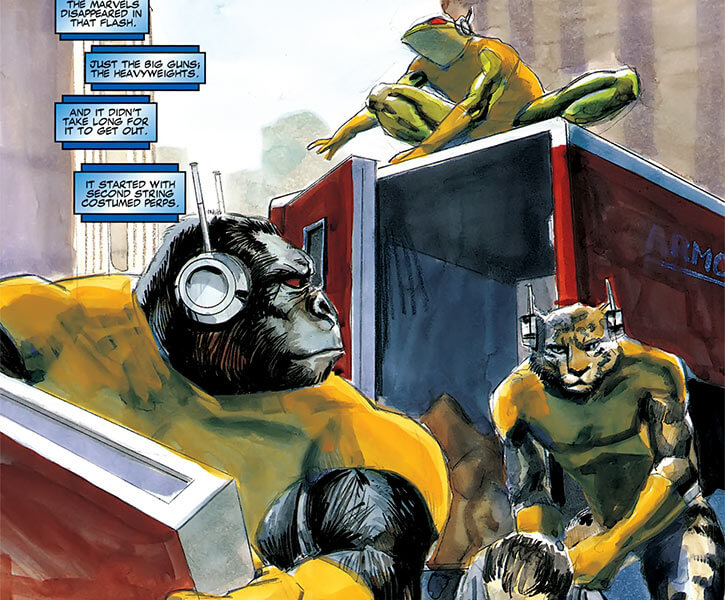 In 1968 Cat-Man, Ape-Man and Bird-Man broke out of jail. Then they recovered their special costumes. They immediately sold their services as the “Unholy Three”.

Their first client was the Exterminator (Philip Sterling). He was finishing his time displacement ray.

They ran a crime wave to fund prototyping. Then they helped the Exterminator raid a society event, using T-ray pistols. These weapons even allowed them to defeat Daredevil.

However, DD found a way to return from time displacement. He defeated the Exterminator and the Unholy Three.

In 1974, the Unholy Three kidnapped the daughter of a rich industrialist for ransom.

However, both Daredevil and Spider-Man (Peter Parker) responded. This ruined an otherwise successful plot. The Three were arrested. 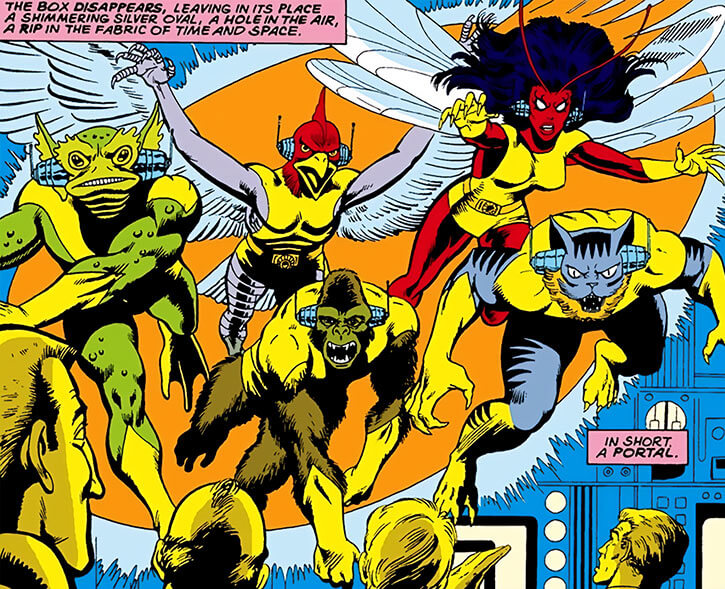 The Nefaria family of the Maggia then broke the Unholy Three out of prison. The trio, plus Frog-Man and one Veronica Dultry, were then used as experimental subjects.

The (unspecified) process turned them all into man-animal hybrids, with matching powers. Nefaria called his enforcers the Ani-Men.

(The process’ nature is a mystery. There could conceivably be ties with Cat People science or even magic. Or with the Deathwalkers’ hybrids. And a reader’s remark reminded me of the process designed by Spider-Woman’s father, later used on Alicia Masters.)

One also gets the impression that they were brainwashed into being loyal toward the Nefaria family. Furthermore, they were promised they’d be returned to humanity if they served well.

These five were teleported into the control centre of a major US nuclear base. This caught the soldiers by complete surprise.

Count Nefaria then took over the controls and the nuclear missiles, launching a grandiose blackmail scheme.

The base was stormed by the all-new, all-different X-Men. Back then, mutants were still working with the government. Though the team was still new, and tired from overcoming other defences, the X-Men prevailed.

The unconscious Ani-Men were apprehended by the USAF.

All in the family

In 1978, Count Nefaria escaped from the Avengers, while the heroes were battling Arsenal.

However, he was aged and weakened, and couldn’t operate on his own. He thus called the Ani-Men to him. He then sent them to find his daughter Madame Masque (Giuletta Nefaria/Whitney Frost).

(Secondary sources  state that the Ani-Men had lost their powers by that point. That’s not evident in the material. Furthermore, Count Nefaria specifically mentions their “animal instincts”. I’d thus ignore the power loss statement.)

Masque was back then in a relationship with Tony Stark. As she hesitantly helped her father, the Ani-Men ambushed and beat up Stark. They nearly killed him, but Stark managed to put on his Iron Man suit. He then promptly defeated the Ani-Men.

However, Stark was also being stalked by the original Spymaster. This assassin had set a bomb in his penthouse, which exploded during the fight.

The Nefarias had just left, and Iron Man survived the blast – but all four Ani-Men were slain. It was later confirmed that their bodies had been found among the rubble.

Meanwhile, the former Exterminator had returned as the terrifying Death-Stalker. In 1979, he assembled a new version of the Unholy Three. Presumably, he had kept costumes hidden somewhere.

The new Ape-Man, Bird-Man and Cat-Man were dispatched to kidnap lawyer Matthew Murdock. However, Bird-Man was taken down by the Black Widow (Natalia Romanova).

The other two escaped with their prey. But as they counted their money, Death-Stalker murdered them with his death touch.

Bird-Man was slain by a Scourge of the Underworld some years later.

One version of the Unholy Three was spotted in New York City during the 1984 Secret Wars  . They were robbing a truck, hoping to benefit from the heroes’ absence during the Wars.

There was a Cat-Man, an Ape-Man and a Frog-Man. They wore the full costumes with the headsets. The Ape-Man was apparently strong enough to rip off the back door of an armoured truck.

Nothing else is known about this version. 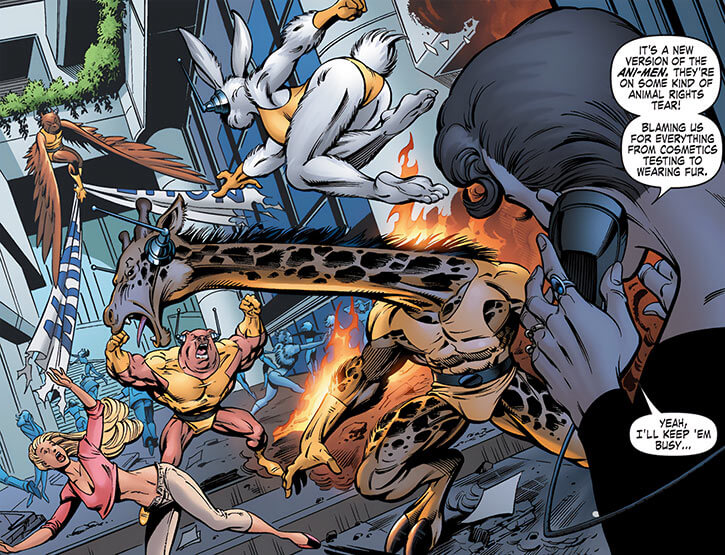 In 2005, an… odd assemblage of Ani-Men attacked a fashion shoot. It was apparently a large affair taking place after hours at a convention centre.

However, a team of veteran Avengers showed up within minutes. They made short work of the Ani-Men, to the dismay of Ms. Crawford’s team-mates – the Great Lakes Avengers.

These none-too-effective activists seemed to have actual powers. These may have come from the costumes.

One arbitrary hypothesis is that these super-suits were an order from White Rabbit (Lorina Dodson), who was arrested before she could collect them. And were later found in their cache by some college kids.

During the 2006 internecine super-hero struggles, a version of the Unholy Three was spotted. They were attending an underworld meeting organised by Hammerhead.

One could distinguish a Bird-Man, a Cat-Man and an Ape-Man among the crowd. Again, full costumes with headsets.

The meeting was raided by Iron Man (Tony Stark) and S.H.I.E.L.D.. What happened to these apparent Unholy Three successors is unrevealed. 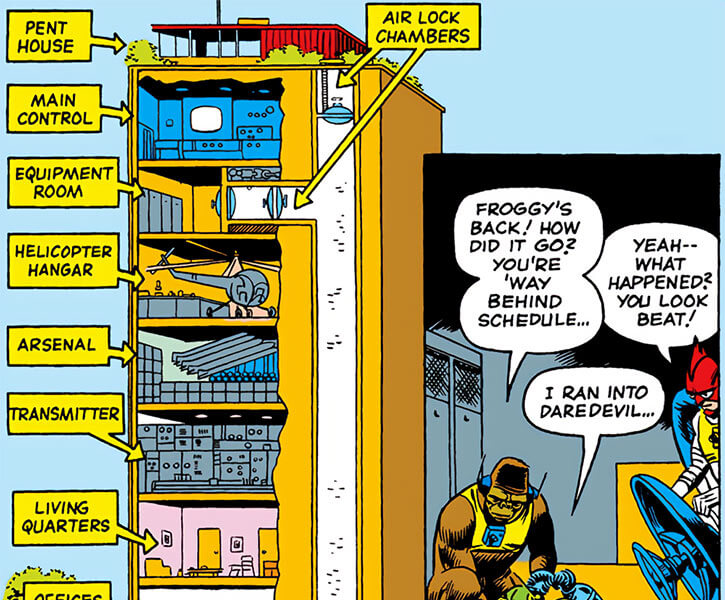 I never had time to have a game where the Player CharactersRPG characters played by a player, rather than the gamemaster or the computer. base themselves in the mothballed, abandoned-for-decades Chemco building. But perhaps *you* can do it ! Perhaps it’s not too late !

Organised by the Organizer !

As the operatives of the Organisation, the proto-Ani-Men were well-equipped. They even had an Expansive Headquarters, as shown in the image above.