Although Bressler is a depressingly average loser, the Ankylosaur armour is good kit.

The armor is vulnerable to sonics. Anything that is described as based on sonics (in DC Heroes RPG this can be the case of numerous Powers such as Vibe, some forms of Flash, certain forms of Force Manipulation, Disintegration, Energy blast, Hypnosis, etc.) will likely work against him.

Bressler is likely to forget about some of his suit’s abilities. Often, he’ll just shell away then melee. He may well waste a few Phases before he remembers to use a useful sensor mode.

Bressler was a two-bit mook. That was mainly because pretty much everything he ever did turned into a failure and he never got a break.

He and his pals were then recruited by the villainous organisation VIPER. Their job was just to stage a diversion near an UNTIL base (UNTIL being the UN anti-terrorist organization). They were to do lots of damage and noise to lure a part of the forces away and facilitate the simultaneous VIPER raid.

UNTIL reacted with much more speed and manpower than anticipated. The mooks with disposable weapons were soon routed. Bressler was cut off the rest. He had to flee *inside* the UNTIL base to escape, hiding in a storage area.

While listening to the noises of the fight and hoping it would go away so he could run like hell, he decided to tamper with a few of the big crates he was hiding between. He simply changed the delivery address to his home. A few minutes later he managed to escape.

To his astonishment, a few days later the crates were delivered to him. Within was the completed Ankylosaur prototype.

UNTIL managed to track them down a few days later. But Bressler had more or less figured out how to use the suit, and thrashed the UNTIL squad that had been sent after him. He then become a freelance criminal. 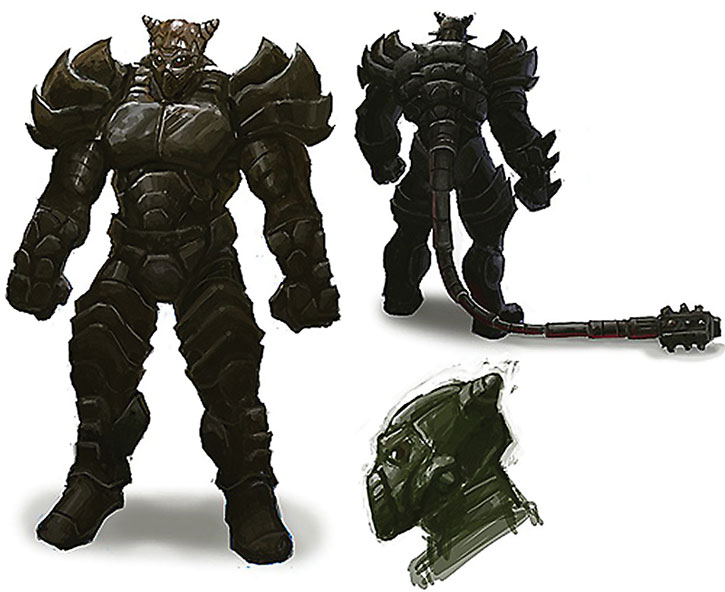 The Ankylosaur suit is a simple steel gray in color.

Bressler is an average schmuck with the beginning of a gin blossom. He dresses with more money than taste.

Bressler is just a bully who likes to be big and tough (which he is as Ankylosaur) and have truckloads of cash. He’s a follower, not very educated (saying correctly the name of the armor took weeks). Villains with brains and style will likely impress him. 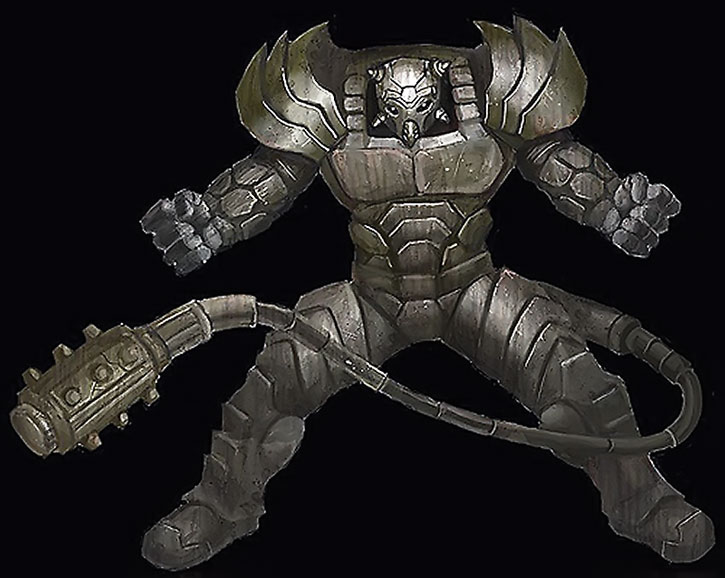 Having been a two-bits hood for years, Bressler hates the cops and anything having to do with law enforcement. He will go out of his way to express this point of view violently. When the subject come up, and needlessly endanger himself and create troubles.

“Ready for a pounding, hero ?”

In the DCU, the source of the Ankylosaur armor would be Intergang – back when it was controlled by Apokolips forces. With its giant dinosaur looks, high tech and brutal weapons, the Ankylosaur suit does look Apokolipsian enough.

The tail grenade launcher is simply modeled by Ankylosaur’s Range power. His ammo supply is 24 shots, stored in six distinct, selectable internal magazines. These are voice-controlled. The launcher is a standard semi-automatic 40mm weapon, intended to be fully compatible with common grenades. Grenade types may include (stats from rulebook) :

You can also use grenades from our Weapons locker – grenades article. 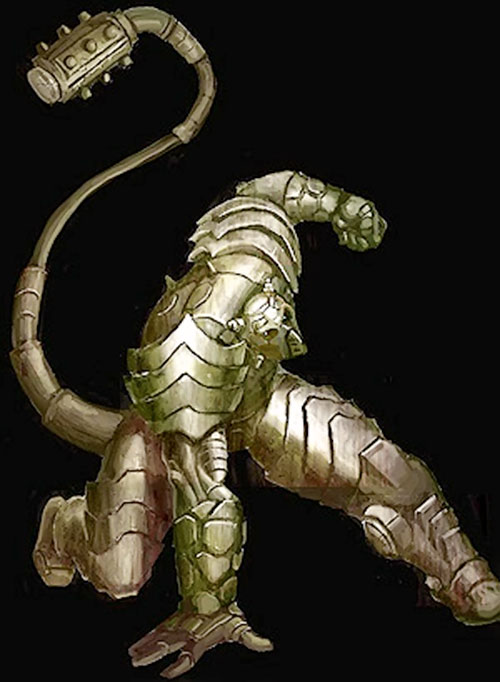