Anna is accomplished in what seems to be a Northern Chinese style of kickboxing – possibly a wushu school. Thus Ms. Wei could beat up several proficient brawlers/martial artists at once in an actual combat situation.

In such cases she prefers to fight defensively (in DC Heroes terms she keep her MA sub for OV in order not get hit). She’s fast and precise but not very robust.

Her other talents include being very attractive and having superior people skills. She has an unusually warm and caring manner.

She is also a superlative :

Stark found it very pleasant to work with her. She was working very fast with a strong technical, creative and design intuition.

Anna did not know who Tony Stark was. She presumably has little interest in international and business news. However her son seems to be an avid comic books reader, so she likely knows a bit about Northern American and Asian superhumans.

Anna Wei’s family has been living in the warren of back streets behind the old port in Sarawak for generations. This neighbourhood is traditionally home to numerous small shops offering cutting-edge services. For the last few decades many of those have been computer shops.

Ms. Wei owned her own, thriving shop. It was reputed both for her technical expertise and her customer-facing skills. However, like presumably all shops in the area, she had to pay protection money to one mister Po and his mob.

(The Sarawak in this story isn’t the real-world region of Sarawak , in Malaysia. It’s an exaggerated, more paranoid version of Singapore.)

(If you want to do without imaginary city-states, this adventure could have occurred in Singapore. Just tune down the exaggerated elements, and assume that the Singaporeans had legitimate reason to be paranoid about Stark. Perhaps a senior executive at the local Stark branch had just been revealed to be part of a terrorist network, or some such.)

in 2001 Iron Man (Tony Stark) was shot down over Sarawak by the authorities. Stashing the armour away, he was trying to come up with a way of getting out there without being noticed. This is when he stumbled upon a street gang threatening to beat up Kiko, Anna’s son. Stark attempted to hold off the gang, but they were too numerous and skilled for him.

Yet he bought enough time for Anna to arrive and scatter the gang. In return, Stark charged the arriving police to give her and Kiko time to escape official attention. During the brawl he lost his wallet, but Kiko found it and kept it for him.

Intending to pay the favour back, Anna hacked the corrections administration’s database. She had the ’anonymous indigent‘ released. Howbeit she paid his bail with real money, presumably due to stringent cross-controls with the banking system.

She then met with Stark when he was thrown out in the prison, and took him to her house as a guest of the family. Playing dumb in order not to compromise his secret identity, Stark did the menial chores in the house as a rent of sorts.

After a time he started working on recovering his armour. Ms. Wei confronted him after noticing the big upgrades he performed on her computers in order to facilitate his hacking work.

Eventually, she decided to continue trusting him. After shagging some they worked on sophisticated infiltration equipment, to recover Stark’s hidden armour.

Meanwhile, Kiko found a tracker leading to the Iron Man armour. He then foolishly used that asset to bargain with Po’s mob so as to free his mother from their clutches. The mob took both the suit and Kiko. As a result, Stark and Wei’s mission became to rescue of both Kiko and the armour.

Wei pretended she had come to pay her debt toward Po that month in sexual favours rather than money. While the goons were distracted by her outfit Stark, guiding himself via a video feed from Wei’s choker, sneaked in. He got close enough to activate the Iron Man suit.

However, in the ensuing hail of gunfire, Wei reacted by shoving her son into the armour to protect him. That made it impossible for Stark to suit up. Furthermore, the suit fell under the control of a virus that had previously infected it. The armour flew away, which alerted the Sarawak military.

Stark had Wei take physical control of the suit via her interface suit. She engaged the power armour -clad Sarawak troopers through the suit using her martial arts skills. This worked great, since her opponents were expecting completely different tactics and moves from Iron man. In the meanwhile Stark deleted the virus.

As he worked he reactivated the armour’s subsystems in sequence. He would test-use, then hand the weaponry’s controls over to Anna as they came online. They fought off the troops and managed to fly into international waters, where they were rescued by the Avengers.

Given her engineering talents, Stark decided to hire Wei to head a R&D centre in San Francisco. He arranged for a new ID for her, as an American-born US citizen with a full paper trail. Her new name, and her son’s new name, have not been revealed.

Ms. Wei was never seen again. Presumably she and Stark decided not to pursue their burgeoning relationship. She may or may not still work at Stark’s, which seems to have an abnormally low turnover rate for the tech industry.

Ms. Wei is caring, warm and loving. In her technical work (whether electronics, coding or fighting), she shows a marked economy of movement.

Likewise in her life she tends to have a fatalistic streak and a Confucian outlook. She accepts and makes the best of whatever the universe floats her way. She accepted Stark in her house without any question or apparent reservation. She just was grateful for his help and instinctively knew she could trust him.

A large part of her life revolve around her son. They share a strong bond and a mutually protective attitude. The kid wants to be the man of the house and provide for his mother. But this just ends up with him in trouble since he’s too young to know what he’s doing. Kiko is very smart for his age, but that causes more problems than it solves.

Anna would sacrifice anything to ensure his safety and happiness.

Anna copes well with danger, as long as it’s not to her son. But the violence and complexity of a superhuman fight (such as Iron Man vs. an army of men in flying power armour) can eventually overwhelm her. These things do take specialised training and/or experience.

“I can always build another store, but my son is my life ! Without him, I have nothing. No matter what happens, it was a fair exchange.”

Drawbacks:
Debt 1 (the pressure from the Po mob), Dependent (Kiko), Enemy (Mister Po). After she gets to the US the Debt and Enemy both disappear, but she gains a Secret ID. 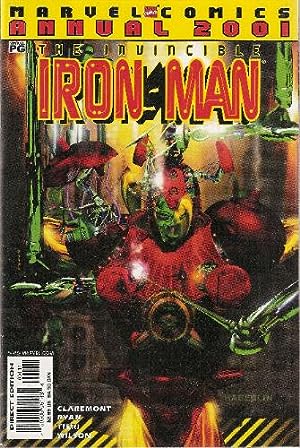 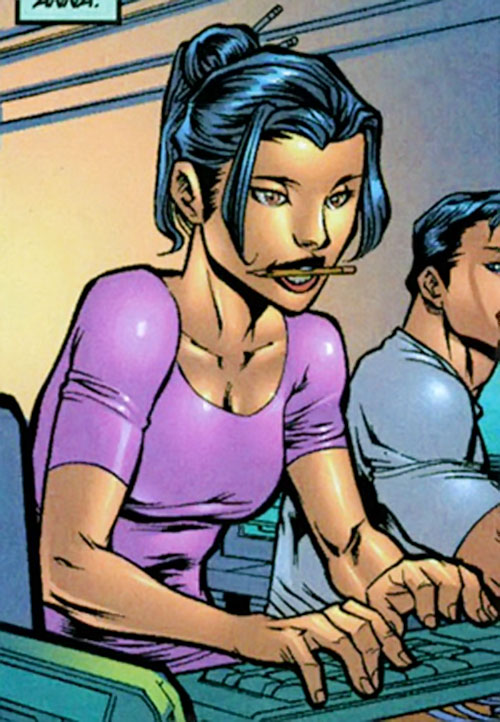 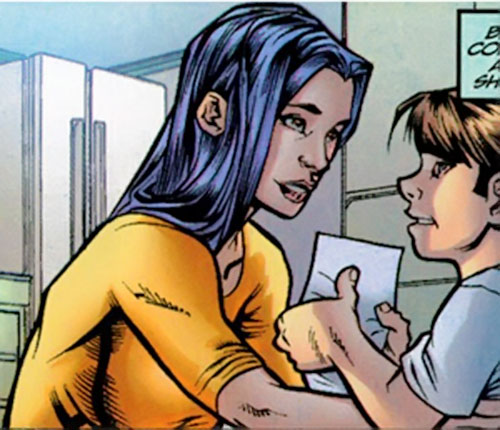