The sergeant can control his body to a large extend. For instance he can repair damage, reattach or regrow limbs, and give it a quasi-fluid consistency. The later makes him immune to blows, and capable of reaching a large volume if desired.

He can also turn into a replica of other people, or even animals. However, it is much easier for him to do so when he can copy a model instead of imagining something.

During his fight with Catwoman he proved to be extremely fast and highly adept.

This man was a sergeant – apparently the US armed forces. He was caught in an explosion during a war. He suffered from terrible wounds, included a maimed hand.

Once medically stabilized, he was transferred to a cruel research project, apparently named Anodyne. While there, he became capable or morphing into random organic shapes, and regrew his fingers. However, while he was transferred out, the ambulance was apparently attacked by armed men and he fled.

The sergeant then became a drifter, only very gradually emerging from a purple haze. He started noticing that people in the street were disgusted by him, and discovered he looked hideous – so he fixed it and made himself look like a movie star. He knew something was wrong – he was supposed to be handsome and a lady killer.

Trying to reclaim what was “his”, he started dating various prostitutes and easy women at dives in American town. However, at one point (usually during foreplay), he would lose control over his appearance, revert to his monstrous base look. In the ensuing panic, he would kill his companion, flee and try again some time later.

This trail of blood became heavy in the East End of Gotham. The recently returned Catwoman (Selina Kyle) had learned that somebody was killing hookers, and after some detective work located the Anodyne subject.

Cat on the prowl

Her attempt to talk with him failed when she accidentally triggered a flashback by saying the same sentence as one of the Anodyne surgeons. The man shifted to a fully monstrous form and attacked her.

It became obvious that Catwoman was outmatched against the superhuman. But, using a huge broken window pane as a sword, she managed to behead the creature and dump the head in a refrigerator. The rest of the body nearly killed her while thrashing about, but eventually collapsed into protoplasm.

By stealthily activating the bat-signal, Catwoman then summoned the Batman to take custody of the Anodyne subject. Despite the cold, he had already started regrowing a baby-sized body when the Batman took him away.

Anodyne has since appeared again. His psychological state was far more stable, since he had overcome his trauma. A well-meaning person, he helped Catwoman fake her death by passing himself for her.

The man oscillates between three states : 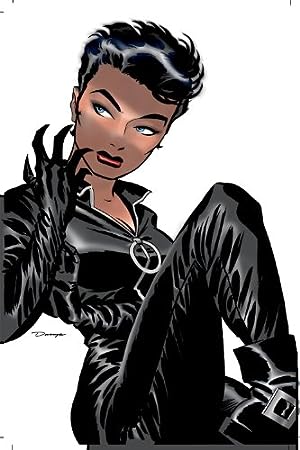 Trail of the Catwoman