While shrunk, he still has his full strength ; thus, he can jump as far as he normally could, but should he fall that same distance, it would be almost certain death. At the GM’s discretion, any effect whose OV/RV ought to be based on weight and not STR, should use Ant-Man’s actual weight.

For example, a small stream of water from a water gun was able to push him to certain doom (the sewer grate beyond the curb). Likewise, some things that would not harm a normal-sized human can be a deadly threat to an ant-sized person ; when Ant-Man was sitting on a car’s engine, the car’s horn nearly deafened him.

His Martial Artist ability represents his mastery of judo, which enables him to fight off ants that are the same size as he is, even before he discovered that he retains the strength of a full-grown man when shrunk.

He is on friendly terms with all the ants of the city, which seem to have a certain amount of sentience. Whenever an ant anywhere hears his name (“Ant Man”), they communicate this fact from one ant to another, until finally, Ant-Man himself hears the news.

Likewise, if the ants see criminal activity, they are capable of recognizing it and relaying the news to Ant-Man. Alternatively, Ant-Man can have the ants trail an enemy. Ant-Man can also tell the ants to be on the look-out for certain spoken words, such as “protector” or “disintegrating ray”.

The ants are his friends not his forced servants. Thus, Egghead’s attempt to turn the ants against him was doomed to failure. Likewise, when the Scarlet Beetle turned all the other insects against humanity, the ants remained loyal.

Once, when captured and divested of his equipment, the ants took it upon themselves to rescue him. When another foe mind-controlled him into committing suicide, the ants came to his rescue without having been asked to do so. When the Wasp became his sidekick, the ants accepted her as a friend.

With his telepathy, Ant-Man can give the ants rather complicated plans for them to put into action. 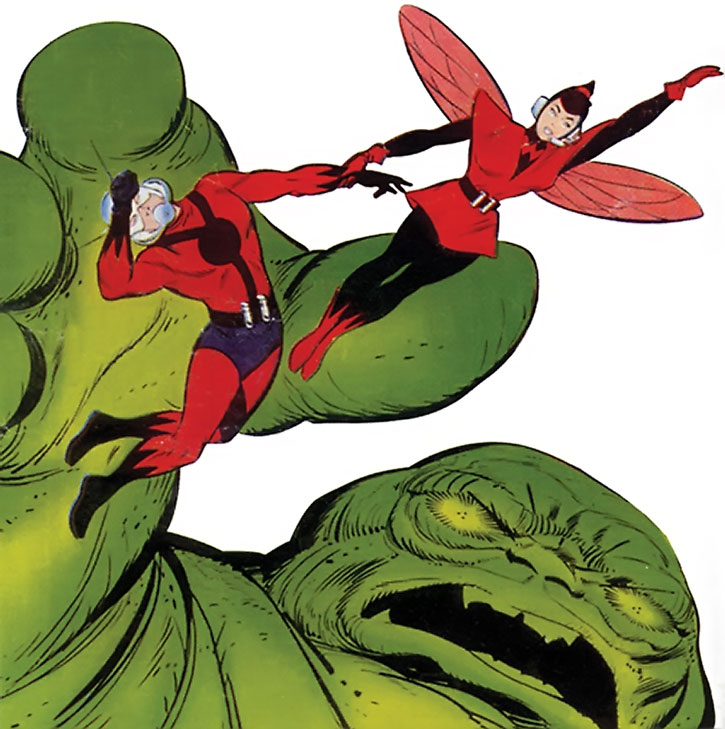 Among the ants that he has available to him are the usual worker ants, flying ants, and even honey ants, who have a limited Glue power (representing the “honey” that they can produce). Enough honey ants can clog up a gun or similar gadget, making it useless.

His lab has a secret entrance, only usable by an ant-sized character. It has a short tunnel from the outside, leading to an ant-sized elevator up to the lab, with the door being a secret panel. It also contains his catapult.

Originally planning his shrinking serum to be a boon for mankind, enabling easy transport for food or troops, he abandoned this idea when he gave up on his serum when it caused him to encounter dangerous ants. He later revisited the shrinking idea and used it (and other inventions) to become Ant-Man. In September 1963, he joined the Avengers.

He becomes Giant-Man in Tales to Astonish #49 (November 1963). In January 1964, Giant-Man spends some time training in order to try to catch the Human Top (later known as Whirlwind) ; it is at this time that his Dex improves to 6 APs. During his days as Giant-Man, he alternates between calling himself Giant-Man (when using Growth) and Ant-Man (when using Shrinking).

He then becomes the “new” Giant-Man, who can only change to 35’ high and back again.

He leaves the Avengers in May 1965, but that’s only the beginning of his story…

Originally, Hank began life as nothing more than the average mad scientist. After becoming a hero, his personality developed into the standard Marvel slightly insecure hero personality. For example, while romantically involved with the Wasp, he found it difficult to work up the nerve to ask her to marry him.

Joining the Avengers would make most people feel more confident, but not Hank. After changing to his Giant-Man persona, he found himself often comparing strength with the likes of Iron Man, Thor, Hulk, Wonder Man, and Sub-Mariner. In every such contest, he (of course) came out the loser.

And, of course, strength is the only contribution that Giant-Man could provide (except when he would fall back on his Ant-Man powers, which were far from impressive).

At this point, his insecurities had not yet developed into major mental problems, but he was certainly not the most stable Avenger. For example, when the Wasp was critically injured, he snapped until she was saved. However, he was sensible enough to realize when he needed to take a leave of absence with the other founding Avengers.

However, his troubles were just beginning… (to be continued).

“When I’ve finished it, I’ll show you ! Then you shall know I’m a greater scientist than ANY of you !”

“I may be no bigger than an ant, but I still have all the strength of my normal size ! And that’s more than enough to punch through a paper bag !”

“Luckily, my reflexes are sharper than ever when I attain giant size !”

“Get me Paste-Pot Pete’s full name ! I want to remember him in my will !”

Connections:
The Ants of New York City (High) (see below for details).

Drawbacks:
Secret Identity, Obsessive Fan Club, SIA to only using Gadgetry in a way that has some connection to insects.

Until he becomes Giant-Man, Growth is almost never used, though the Scarlet Beetle used it to go from beetle-size to slightly larger than man-size. When using Growth, he does not suffer the full DEX reduction ; he loses one less AP of DEX than normal, so that when using 3 APs of Growth, his DEX is not reduced at all.

If more than 3 APs of Growth are used (making him more than 12 feet tall), he becomes too big to support his own weight, and can only lie helpless on the ground (at least originally).

Later on, when he used more than 3 APs of Growth, half the APs of Growth above 3 would subtract from his Strength instead of adding to it. Growth only adds half its APs to his BODY (but round up). So, when using his usual 3 APs of Growth (for a 12’ height), he has a DEX of 06 (after fighting the Human Top), STR of 07, and a BODY of 06. His maximum height is about 100 feet tall.

At this time, if he were to use his maximum height (100 feet, 12 APs), he would have stats of DEX 02, STR 09, and a BODY of 10. However, as the new Giant-Man, he began having difficulty with constant size-changes, meaning that he would choose to only switch between normal size and 35’ tall size.

If he chooses to do otherwise, he suffers from dizzy spells. At this time, he also lost the ability to change sizes quickly, so he can no longer switch Growth on and also deactivate Growth in the same round.

While using Growth, Giant-Man has a tendency to run into things more than he normally would (despite being able to dodge attacks with ease). Whenever he runs in a city while using Growth (whether to escape or to catch an enemy), he must make a check or be either unable to move the full distance (because he tripped over something or was stopped by power lines, for example) or unable to avoid crashing into something (treat as a Charge maneuver) at the GM’s discretion.

Digging represents his ability to dig (with his hands) at greater than normal speed when shrunk, since he retains his normal human strength. The amount of material removed with Digging is affected by APs of Shrinking (but from Ant-Man’s perspective, he’s digging the usual amount with his Digging power).

Adventures with the Ants

How should one represent Pym’s encounters with ants ? The stats of ants would normally be negligible, but when Pym is ant-sized, they represent a real threat (or ally). I suggest that each ant have the following stats:

Source of Character: Marvel Comics, up to June 1965. 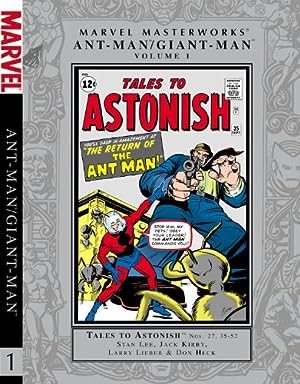 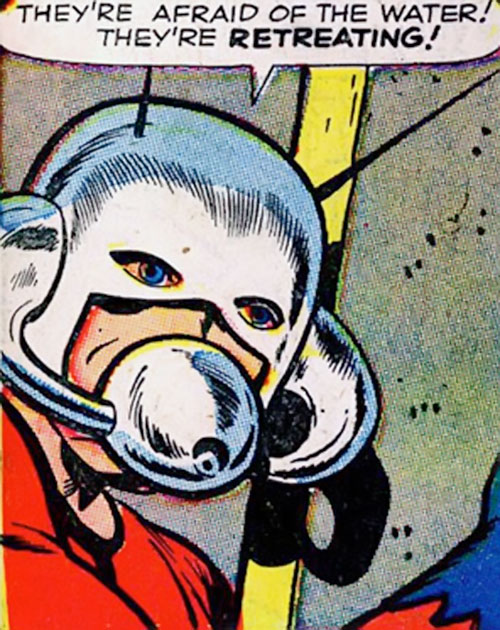 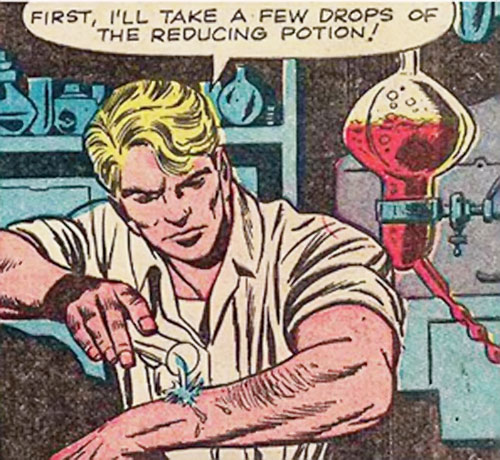 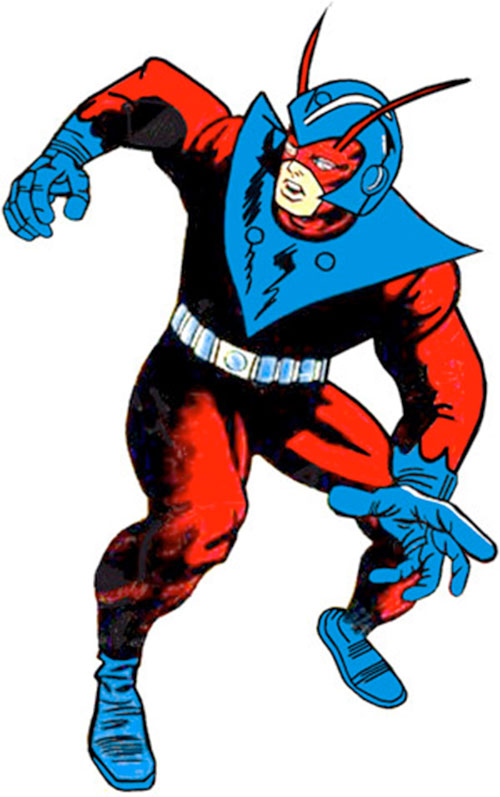 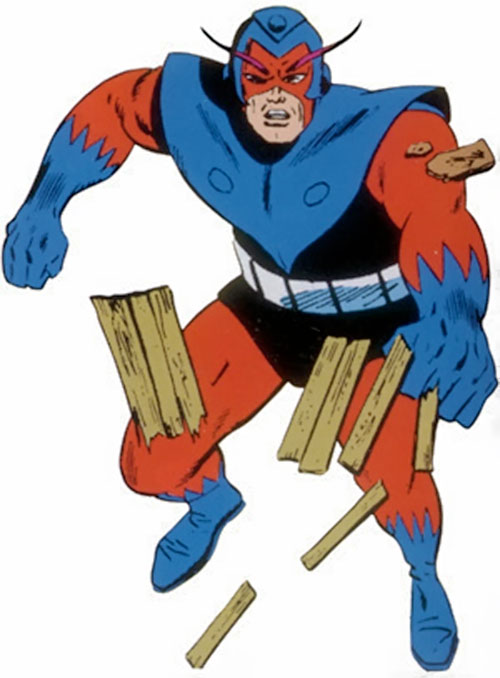 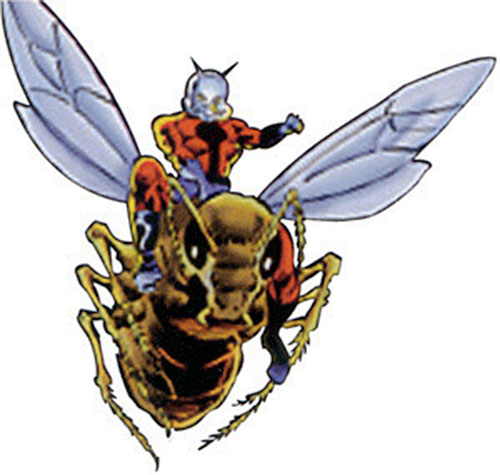 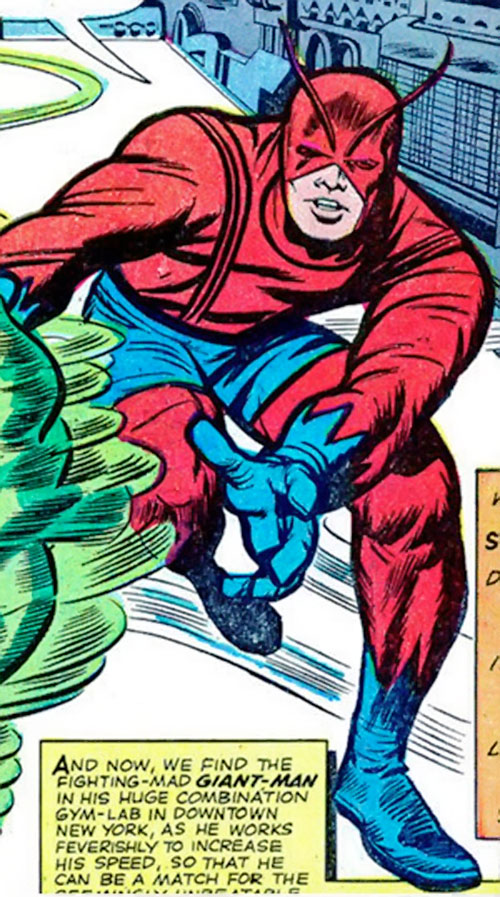 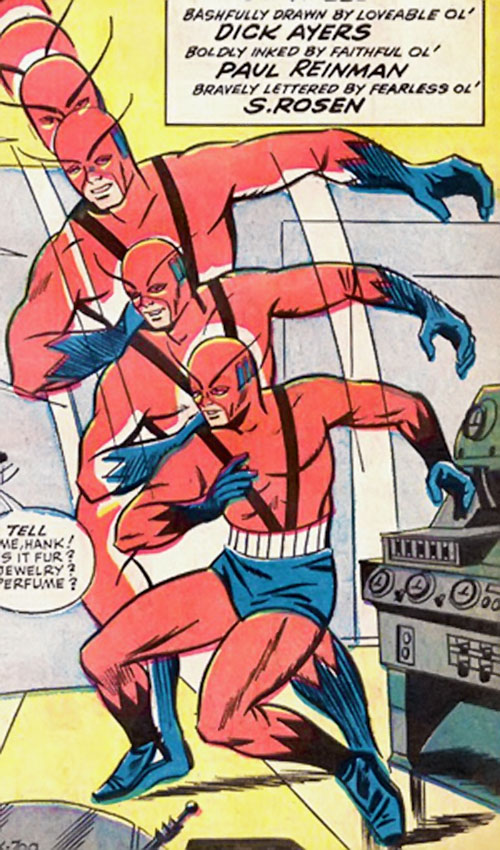 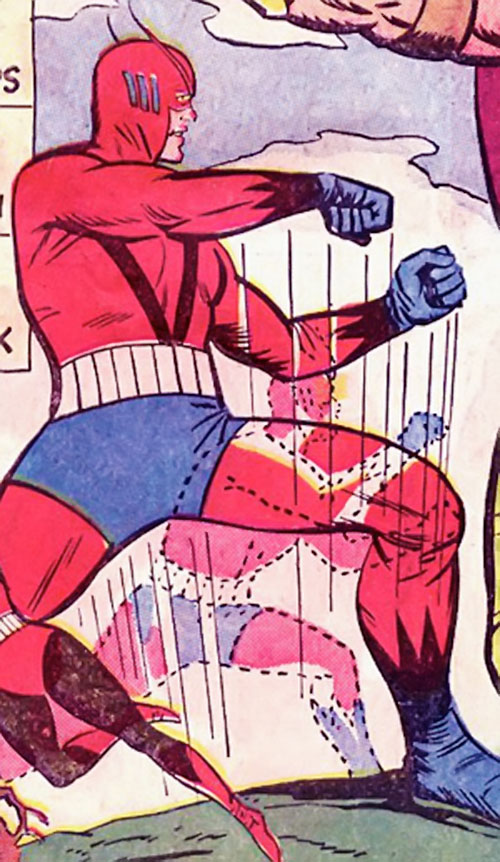 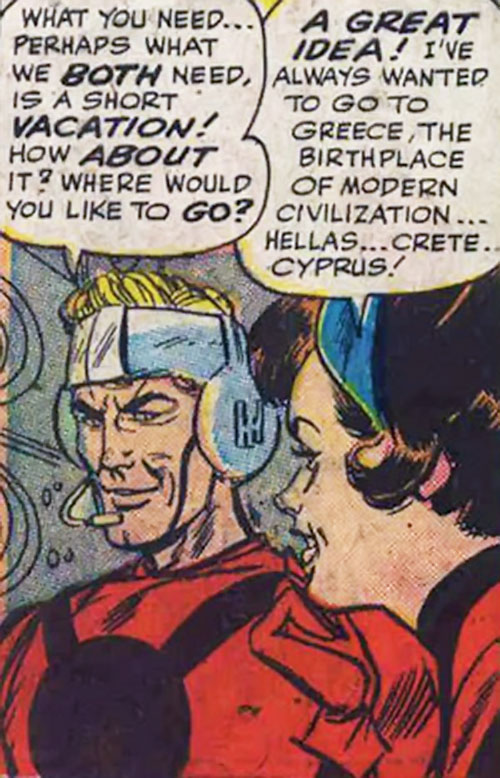 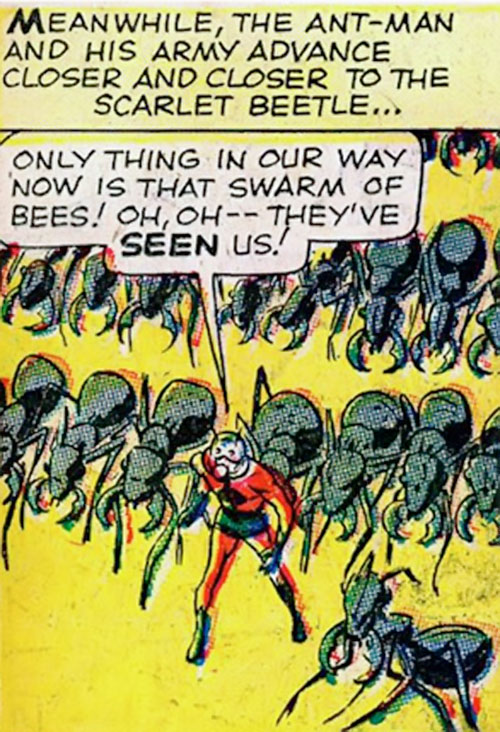 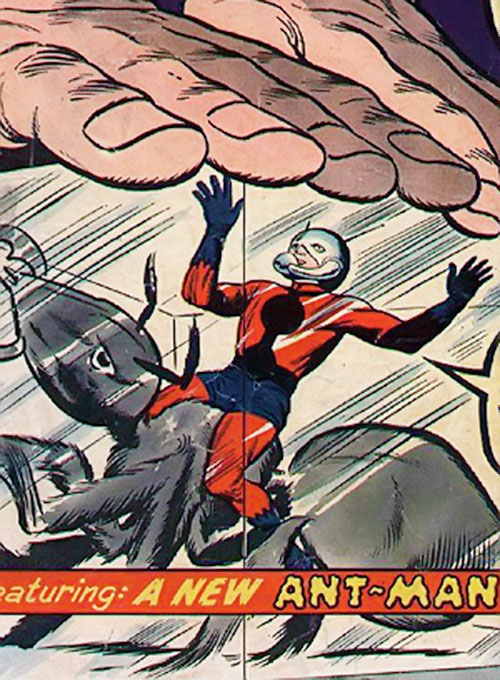