Antoine Sharpe, the protagonist, is a distinctive character as well as a preternaturally-skilled detective.

This profile has some minor S P O I L E R S about the story.

What a wonderful world

The Atheist’s world is not unlike the genres of urban horror best known to role-players through games such as Delta Green , Conspiracy X , Over the Edge  or Unknown Armies . Comic book fans may also be reminded of Global Frequency or Desolation Jones.

(Much of this work was produced in the 1990s and 2000s, with TV series The X-Files being an important impetus. Back then, the number of people who actually believed this stuff wasn’t significant. The stories’ connotations were thus quite different than they became during the 2010s.)

It’s basically the modern world with an added layer of conspiracy, violence, grimness, and freaks of science and nature. Some cutting edge projects reach further than what is commonly understood about the scientific advancement in the real world, but such things are very much secret.

Secretive agencies and men such as the Atheist keep a closed lid on all the weird and horrible and deviant stuff. This keeps much of the population ignorant of the horrors that are going on.

This world has a strong, but diffuse, aura of horror and dread. This makes it difficult not to fear supernatural causes behind some of the more horrific and unlikely events that are known to those in power. It seems exactly like the kind of ’campaign’ where one would expect Things Man Was Not Meant To Know  or Secret Vampire Masters , except there aren’t.

Even somebody like Sharpe must work very hard to actually happen upon something supernatural. Years can — and do — pass without such incidents.

Antoine Sharpe has been called a “human scalpel”. This is not just a pun on his last name – Sharpe has a power of observation and deduction that lies somewhere between “unbelievable” and “inhuman”. He’s scary smart and determined, highly driven, and seems to have some type of photographic memory.

Interestingly, there is no attempt in the story at rationalising Sharpe’s deductions. Even when they seem impossible. Though the reader may imagine that Sharpe likely read an intelligence file at some point, or spotted some detail or the other, it is presented practically at mind-reading.

Sharpe is impossibly good at interpreting body language, and may be the world’s most accurate lie detection system. He’s certain that his observations in this area are always right, mostly because they are. The Atheist never explains how he does it. In fact he’s surprisingly close to the Magician’s Code in behaviour.

More broadly, Sharpe can perform extensive system dynamics analysis within seconds. Such as deducing lots of information about the writer by flipping through a novel, sensing what’s potentially wrong with a car’s engine by feeling its vibrations, etc. He’s also a master of both deductive reasoning and bluffing.

The Atheist is somewhere within the autistic spectrum. He has a number of odd reactions and mental blocks about everyday things, as noted in his DC Heroes RPG Drawbacks. in practice, those are more akin to odd phobias. He can live without special problems and functions well in general, but there are some well-identified things his brain just refuses to do.

Apparently he also has to eat from a narrow and unusual selection of foodstuff, including pumpkin pie and boiled eggs.

Since he’s one of the proverbial “top men”, Sharpe knows about tons of secret or simply obscure government activities.

The Atheist is in decent shape and knows the basics of hand-to-hand combat and firearms operation, but that’s about it. In those few cases where physical violence is actually needed, he’ll trust those professionals he finds competent to do their thing.

Among the myriad US intelligence agencies, the Undersecretary of Defense’s Office for Emergent Technology occupies a special place despite its unminacious  name. Their Eisenhower Executive Office Building HQ is where the weird stuff and the seemingly supernatural ends up. In their jargon, what doesn’t pass the “giggle test” at other agencies.

For the really hardcore cases that have them baffled and leave only supernatural explanations, the Office contracts their “special guy”, Antoine Sharpe.

Sharpe, whom even the agents consider to be spooky and uncanny, is called behind his back “the Atheist”. What was actually meant is that Sharpe is resolutely a sceptic. Either a dictionary is too much for the Office’s budget, or it was decided that “atheist” sounded more ominous, at least in the context of mainstream US cultures.

The so-called “Emergent Technology‘” office is not Sharpe’s main official job. Washington actually hires him to look at budgets, technical proposal, battlefronts, etc. as a system dynamics  analyst. He’s paid to point out holes and weaknesses.

His investigative field word tackling the weird stuff is closer to being his reward. The Atheist has been allowed to act as a special agent in those cases so he wouldn’t get bored. In return, he continues working for more mainstream government agencies.

Sharpe closed several cases that seemed to involve monsters, psychics and hauntings. He always uncovered rational but low-probability causes behind those :

He’s also good with crazed cults. Since he can easily analyse their delusions and use their beliefs as a weapon to neutralise them simply by speaking to them.

You don’t need a shrink but an exorcist

In 2005, Sharpe was asked by his employers (and analysts from the NSA and USAF) to tackle a particularly puzzling and frightening case. It involved thousands of teenagers being apparently possessed by dead people and converging on Winnipeg. During this case he was capably assisted by CSIS  agent Melissa N’Guyen.

The other documented major case was investigating the abnormal disappearance rate of young brides in a rural North Carolina town, with the help of Sheriff Lynn Conrad.

The Winnipeg case would likely have been an extinction-level event without Sharpe. Ever since then, the Atheist seems to be working at a very high and hideously confidential level of the US gov’t. Though he may just have been lying through his teeth when describing his position, as his words mirrored urban legends.

On the other hand, he could get an EPA  team to come PDQ to a remote corner of North Carolina by snapping his fingers. So he may not have been lying about his credentials.

Sharpe is a mountain of intellect and perception, and it’s really really cold up there. He has a machinelike edge to his behaviour, is highly logical and facts-based, and is extremely frank and blunt (though not needlessly insulting).

He’s not a happy man. There are few things about the world he likes – save for uncovering the truth, plumbing mysteries, and being in the company of smart, competent people.

The “atheist” nickname is a poor choice on his coworkers’s part. Sharpe is just an entirely facts- and evidence-based person. He has no “beliefs”. Either he knows or he doesn’t know. Either something is proven, or it has to be thoroughly investigated and analysed so it can be understood.

His approach of the world is entirely scientific. This in turn means that his greatest joy is to explore and analyse new things to gain a greater understanding of the universe. His investigative work allows him to be at the frontier of the real, which he greatly enjoys despite the danger.

It also means he has a greater-than-normal chance of meeting people of superior intellect and competence.

Since he generally deals in tough, even brutal cases, Sharpe is somewhat often in the position of having to decide who dies and who lives. He, of course, makes the choices rationally and based on a maximised greater good. His sheer cold and logical side allows him to carry these choices to their bitter end — even though they obviously cost him as a human being.

“I appreciate the challenges, Mr. Obler. I really do. But to date, all your otherworldly menaces have had decidedly mundane origins. We humans, we delicate, beautiful snowflakes of ingenuity, we’re perfectly capable of generating the boundless evil in the world. No supernatural outsourcing necessary.”

Agent N’Guyen (annoyed): “What are you going to ‘see’ that the best psychiatrists in the Defense Department don’t ? You that smart ?”
Sharpe: “No, Ms. N’Guyen. I’m not very smart at all. What I am is perceptive. Extremely perceptive. I see information as pattern. In a human being those patterns manifest as subconscious decisions that reflect true intent more accurately than overt behaviour.”
N’Guyen (still annoyed): “You’re a fortune teller.”
(Silence. The Atheist stares at N’Guyen with a creepy air.)
Sharpe: “Two abortions. The first when you were 13 or 14. Father died when you were a child. A substance abuse problem conquered without outside assistance. Smart enough for college, but financial considerations pushed you into the military where you thrived in an environment of discipline. Perhaps becoming a MP. Estranged from your mother, but still crave her approval. Shall I continue ?”

“Because you are a rare commodity, young lady. You are a capable human being.”

“Thinking is all we have, Bertrand.”

N’Guyen: “What exactly are we going to do ?”
Sharpe: “What I’m best at. Staying wide awake.”

County sheriff: “I don’t know. I don’t know anymore. I’m in over my head here. Jesus wept, I need the state police or the FBI or something.”
Sharpe: “You already called for help. That call reached the highest levels of our government. Levels described only on the most fevered and arcane conspiracy manifestos. And the people who scurry through those levels, who work the machines that topple disobedient regimes, who pull the levers that assassinate curious Presidents — who do unspeakable things to keep the right currencies flowing through the right hands, well…” (beat) “They sent me.”

The Atheist would be the “special guy” of a shadowy agency that exists above the DEO.

Alternatively he could be an African member of the 2000s Checkmate UN organisation – perhaps from Botswana.

Drawbacks:
A rough equivalent of the Magician’s Code, ironically enough. Misc. Sharpe reads at the pace of a first-grader ; Misc.: Cannot perform some everyday tasks such as driving or cooking ; Misc.: Cannot have something not coloured white or yellow touching his skin for more than a few seconds without vomiting.

Equipment:
Sharpe carries a number of small, useful things. Two of the demonstrated examples include:

Source of Character: The Atheist (Desperado Comics, published by Image). This profile covers the first four issues. The Atheist character is copyrighted by Phil Hester and John McCrea. 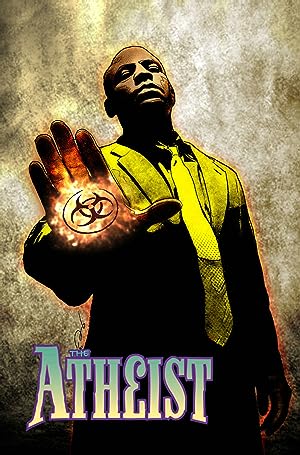 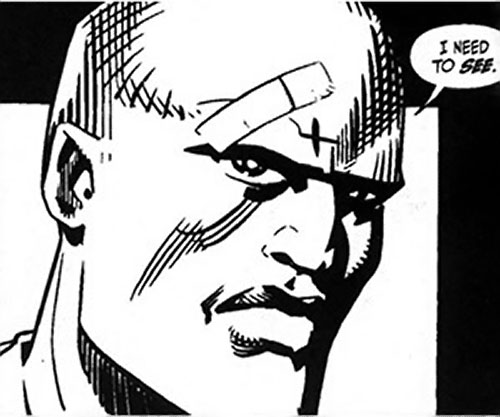 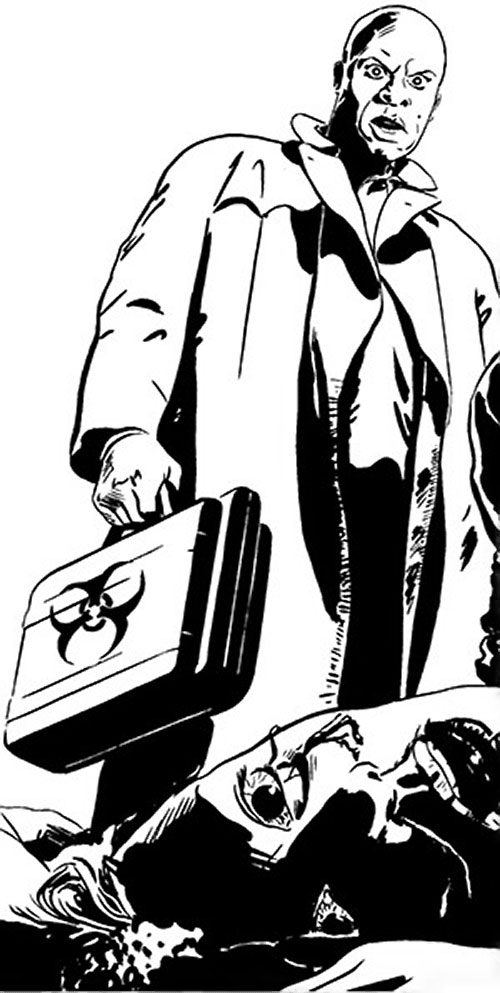 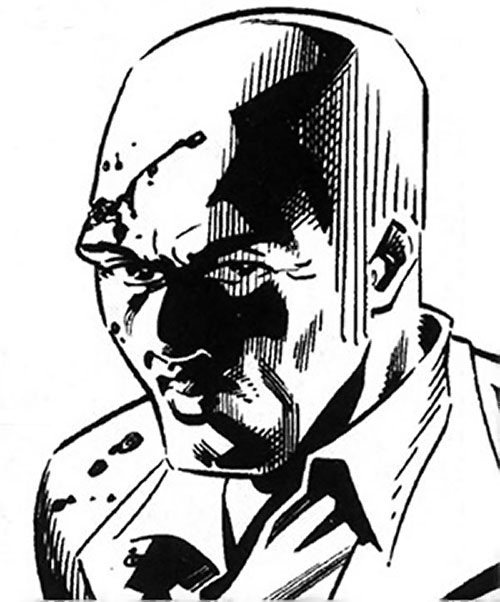 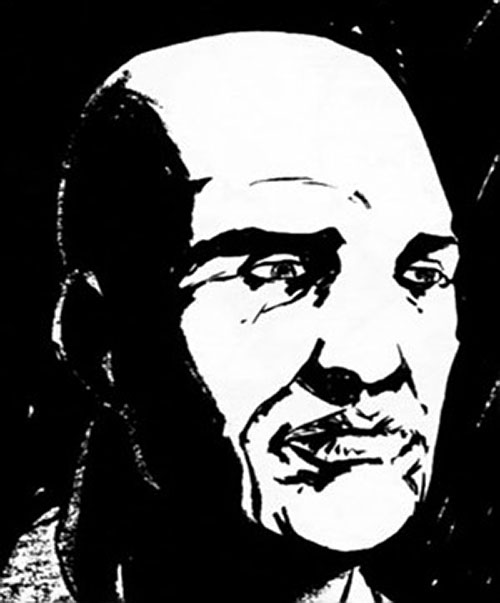