Anton Lone has an indestructible will, powered by an almost pathological need to own everything and be the most powerful man alive. He has to control everything, and everything has to bend to his will.

Lone is an exceptionally ruthless man. He is responsible for the death of hundreds, and quite possibly thousands, of people. His plans might involve carnage on a huge scale, such as nuking Los Angeles. He’s not afraid to occasionally send actual heavily-armed commandos on rival corporate properties.

He’s not unlike a James Bond villain, with a cyberpunk -ish evil corporation under his orders.

Whatever might happen, Anton Lone is always in control. A superhuman, 7’ tall underground king of the fire people might shear the rock around him with alien weaponry. But Lone still won’t take his first offer and will aggressively negotiate the deal.

One of Anton’s Lone assets, hidden deep in his L.A. tower, is a secret cabal of three scientists. These have been gathering a mysterious kind of super-advanced nanotech of otherworldly origin, for generations. The most successful implantee has been Solitaire. Other clients included Rush and Kutt.

Anton Lone, an exceptionally strong-willed and ruthless man, first appeared in Istanbul. He was a small time criminal, and his throat was slit over a $10 debt. Holding his throat together with his hand, he walked three miles to a doctor and lived. After killing the doctor (so he wouldn’t call the cops), Lone moved on.

Unable to talk for the next two years, he became a highly successful hitman. He invested all of his money in buying back the racket of the men who had tried to kill him, and finally killed them all himself.

(FWIW, the Solitaire comic ran in 1993/94, whereas The Usual Suspect was in 1995. So the inevitable comparisons to Keyser Söze are actually backward.)

From there, Anton Lone’s power grew as he built a criminal empire. He was always careful to make it a secret, shadowy force, and make large investments in legitimate enterprises.

How his empire reached his current size, making him a famous American business mogul, is not clearly known. But it involved much violence, market manipulations, extortion, intimidation and other illegal practices, leaving many corpse in Lone’s wake.

Part of his business was conducted in Cuba (before Castro ousted him) then Haiti, where he funded one of the anti-democracy coups. At one point (“Slave trouble in Damascus”, once said Lone), he even secured the services of one of the most skilled corporate assassins and bodyguard alive, Jinn.

When Anton lone was in his 40s, he chose a call girl to father a son, Nicholas – who was to be his heir. When Nicholas was eight, Anton killed his mother in a fit of anger, and started to have him mostly raised by nannies and teachers.

Son of the lord of crime

When he was 14, Nicholas discovered the terrible truth about his father. he tried to fight his criminal activities from the inside. However Anton discovered what he did and had him straightened out. In Anton’s opinion, Nicholas had to stop that youthful rebelliousness and be a responsible man, taking an active hand in his father’s empire.

Nicholas then became a playboy and drifter, much to his father’s consternation. He ended up committing suicide by crashing his car.

But Anton Lone had power even over death. He had Nicholas resurrected by a cabal of scientists, who also made the lad him very hard to hurt. Furthermore, they implanted Nicholas with mind-controlling nanites that would make him obey his father. However, this would need years to become effective.

Vengeance of the son of the lord of crime

Nicholas rebelled again. He sent a look-alike to carouse in his stead in remote locales, and becoming the vigilante Solitaire. He fought hard against his father’s empire, destroying small sections of it.

In a daring move, Solitaire assaulted Lone’s tower. He captured his father and brought him close to the detonation of a nuclear warhead intended to raze L.A.. This allowed Solitaire to disarm the charge. Although Lone regained some of his losses while selling the remaining nukes, he had taken a hard financial blow.

However, Solitaire couldn’t stop Anton Lone from trading leftover nukes for fire and gravity weaponry from Atalon, powerful King of the Fire People. Or getting hold of the secrets of the Ultratech corporation.

With the secrets of Ultratech to be used as leverage against JD Hunt, head of Nuware corp who had just made an hostile takeover on Ultratech, Lone came into possession of Nuware’s biggest asset. Namely wetware, a technology allowing to create ultras.

The loyalty nanites then finally kicked in. Nicholas thus came back to serve Anton, who began to build an army of superhumans. Lone had passed a deal with Atalon, who was preparing a huge assault on the surface world. Atalon would, after the war, leave Lone in control of North America, a continent Lone planned to control with an army of superhumans.

However, Nicholas Lone had his nanos neutralized, regaining his freedom of thought and the mantle of Solitaire. When the crime lord discovered this, he killed Jinn.

But Anton Lone was killed in a subsequent fight against his son by the first ultra he had managed to create.

See Powers and Abilities – Lone’s personality is his main power.

“By all rights, you should be dead, son. But then by all rights I should still be a poor man, and not a billionaire. I shouldn’t have the connections to purchase nanotechnology to fill my son’s body.”

“I’ve been up against death too many times for some punk in fairy tights to make me back down !”

Since he lives far from Luthor, he could exist in the DCU – and probably give the Titans West a deadly amount of trouble. 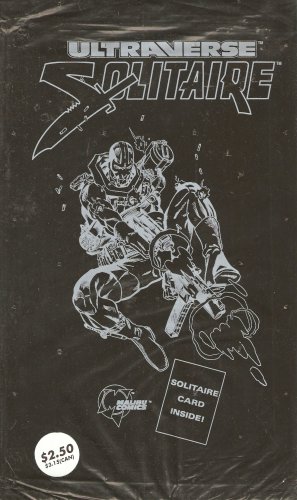