In addition to being a talented guitarist and singer, Benito has trained to be a highly skilled gunfighter. He’s capable of using a wide variety of firearms while deftly avoiding return fire.

Trailer for the second movie, Desperado, with Banderas as Benito. It’s oddly slow but it shows the movie universe.

Benito was a young Mariachi (a wandering guitar player, sort of like a minstrel) carrying on the family tradition. On wandering into a small Mexican town carrying his guitar case, he was mistaken for a recent jail escapee, Azul, who carried guns in a guitar case.

Azul was an enemy of local crime boss, Moco. Thus, Benito became a target for his hired guns. He found sanctuary with a barmaid, Dominó, and they fell in love. She and Azul were killed by Moco, who then shot Benito in his left hand. Benito killed Moco.

Unable to play his guitar, the wounded Benito was driven by a desire for revenge on all drug lords connected to Moco. This culminated with Moco’s boss, the man known as Bucho. The ex-mariachi became a highly skilled gunfighter, carrying around a small arsenal in his guitar case (with a false guitar as a second lid).

He travelled from town to town, preceded by his sidekick, Buscemi. Buscemi spread slightly exaggerated stories of a legendary vigilante with a guitar case. While not necessarily looking to kill anyone but his targets, the mariachi often left a number of dead scumbags in his wake. 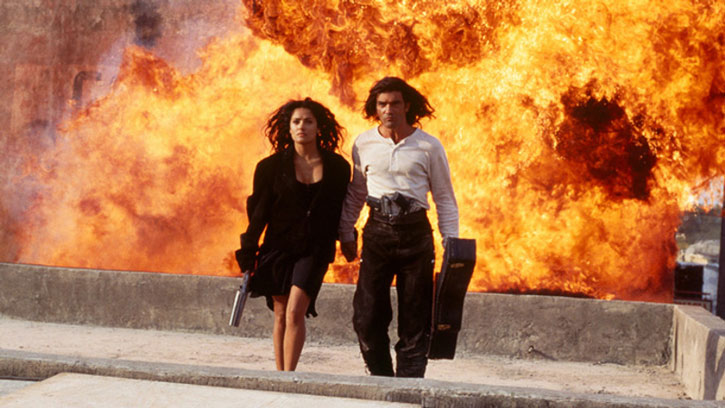 Finally locating the town where Bucho lived, Benito started looking for him in a sleazy bar Buscemi had already primed. It inevitably escalated into a gunfight. He survived, leaving everybody else dead apart from a thug who’d been in a back room. The thug followed him out and shot him in the street. Benito was wounded, but killed the thug.

He was taken in by bookstore owner, Carolina, who tended his wounds and hid him from Bucho. He was further wounded after being attacked by a thug who killed Buscemi. The murderer was an agent of the Columbians, keeping an eye on Bucho.

When Bucho realised Carolina was aiding the Mariachi, he sent his men in to kill them and burn her place down. Benito and Carolina survived, but her home was destroyed. They waited nearby, and Benito got Bucho in his crosshairs. He hesitated on recognising Bucho as his older brother, César.

Calling in his friends Campa and Quino for support, Benito got in a gunfight with Bucho’s troops. They slaughtered his toughest guys. Campa and Quino were also killed in the battle, and a local kid was seriously wounded.

Benito and Carolina confronted César at his estate, where they killed him in a gunfight. With pretty much everyone else dead, and revenge finally had, El Mariachi and Carolina drove away into the sunset together.

Once Upon a Time in Mexico

Not quite escaping the vigilante life, Carolina joined Benito in the occasional fight. They ran afoul of General Márquez, who developed a fixation on Carolina, but they evaded his attention and wounded him in a gunfight. He hunted them down after they’d retired to start a family, killing Carolina and their daughter, and leaving Benito for dead.

Benito survived, retiring to a village of guitar makers where he lived a simple life. His retirement didn’t last, as thugs working for rogue CIA operative Sands found him, threatening to kill the villagers unless Benito came with them. 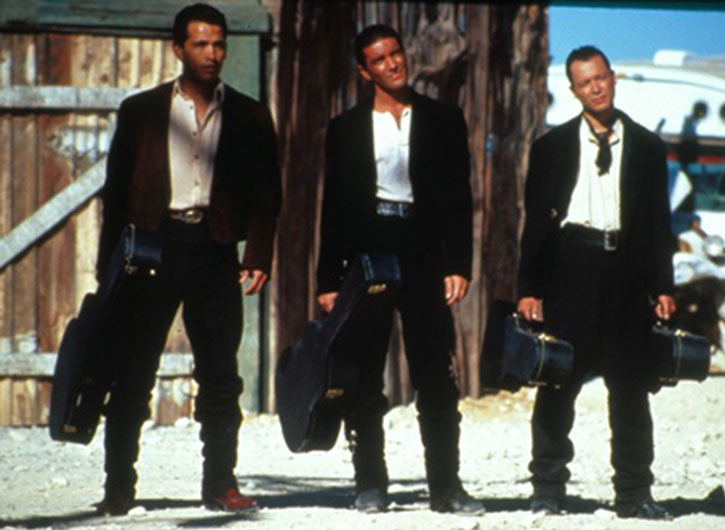 The mariachi, Campa and Quino.

Sands told Mariachi that Márquez was working for drug baron Barillo, preparing for a coup and assassination of the Mexican President. While the death would serve Sands’ interests, he didn’t want Barillo to get power, so wanted Mariachi to kill Márquez at the appropriate juncture.

Barillo was aware of Sands’ plan, and had the mariachi abducted and tortured for information. Benito escaped, and recruited Lorenzo and Fideo to help him foil the assassination.

Using Sands’ assets to get them into the palace, they used the chaos of the public resistance to the coup to rescue the President and get him clear. Benito also got to face Márquez and killed him. They got the President out of the city dressed as a mariachi, and helped him find loyalists.

They then went their separate ways, having shared out the millions with which Barillo had intended to pay off Márquez.

Benito returned to his village and the simple life.

A very good-looking Latino, with a haunted look in his eyes. He wears black mariachi clothing that fits him very well, and usually carries around a large guitar case. Which is quite heavy and emanates an air of menace. His jacket has a black scorpion on the back.

Initially carefree and self-effacing, Dominó’s death and his injury caused him to became bitter and hardened, and he devoted himself to stopping crime and drugs ruining others lives.

While he won’t kill if he can help it — despite a quick temper that could escalate things if he didn’t have it under control — he has little compunction against killing criminals who don’t give him a choice.

He’ll regret it later. The killing taking its toll on his good heart, but in the moment he’s focused on what he’s doing. Not so focused that he won’t go out of his way to protect innocents caught up in events. 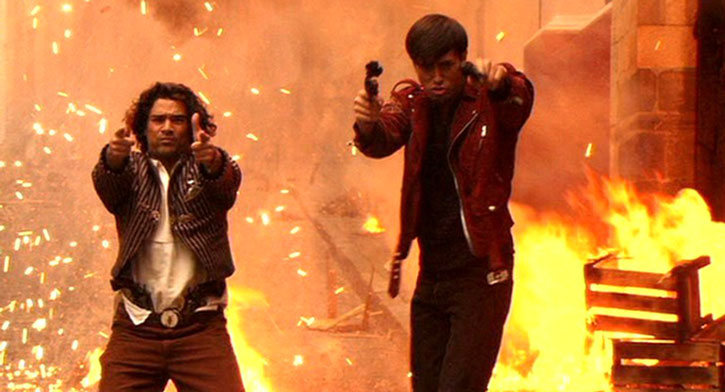 “Give me the strength to be what I was, and forgive me for what I am.”

“Bless me, Father, for I have just killed quite a few men.“

The short bartender, to a bunch of armed thugs: “¡ MATALO ! ¡ KILL HIM !”
El Mariachi: “Not yet.” (huge firefight ensues)

An occasional acquaintance of Hitman. They were both trying to kill the same drug lord, and were forced to join forces to get the job done.

Drawbacks:
None at this point.

During El Mariachi his Physical Stats were all 1AP lower, his Mental Stats were 04/04/04, and his Mystical Stats were 03/04/04. He didn’t have Iron Nerves, Reputation, Paired Firearms. His only Skills were Artist and Weaponry, the latter at 4 AP. His only equipment was his guitar.

During Desperado, he started off with the Buddy Advantage for Buscemi, until he was killed. Buscemi travelled ahead of him, spreading rumours (to promote his Reputation) while reconnoitring.

During the time El Mariachi also had a MPR (Shot in left hand – wound prevents him from playing music, among other minor effects), but this appears to have recovered sufficiently to not bother him by the third film.

He also had Campa and Quino (see below) as High Level Connections during this time, until they were killed. He had Guilt during this period.

El Mariachi has connections with a number of other highly armed mariachis, who’ll come to his aid when faced with large numbers of foes. Campa and Quino were fairly trigger-happy, but a bit too reliant of their specialised guitar case weapons, which eventually got them killed.

Lorenzo and Fideo are more careful, and while they use specialised weapons they also carry regular firearms – which is probably why they survived.

Source of Character: El Mariachi trilogy, character played by Carlos Gallardo in El Mariachi, and by Antonio Banderas in Desperado and Once Upon a Time in Mexico. 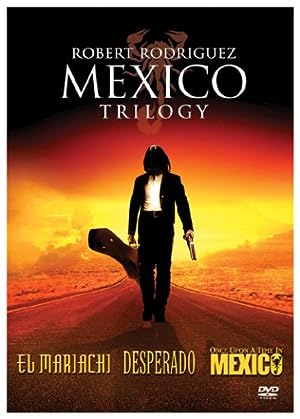 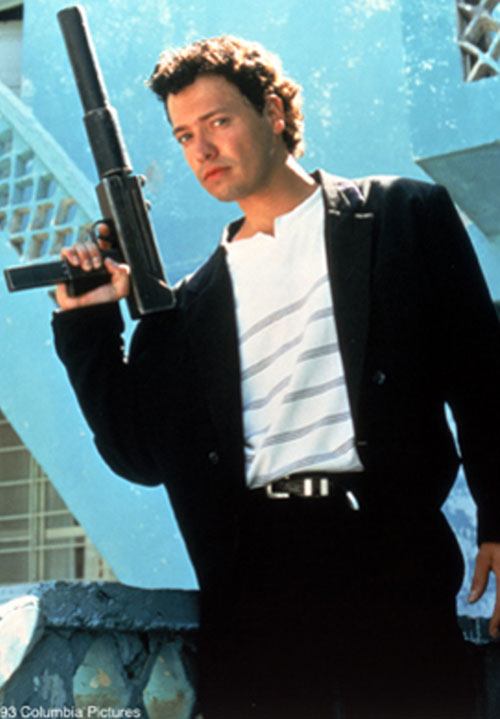 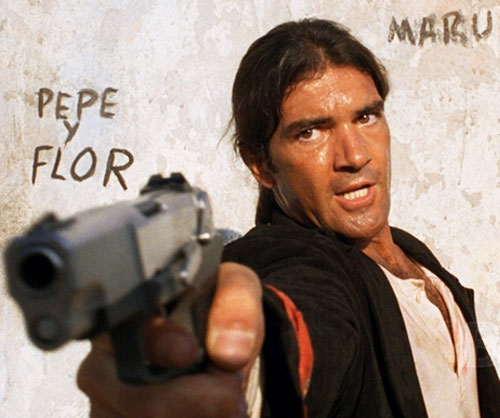 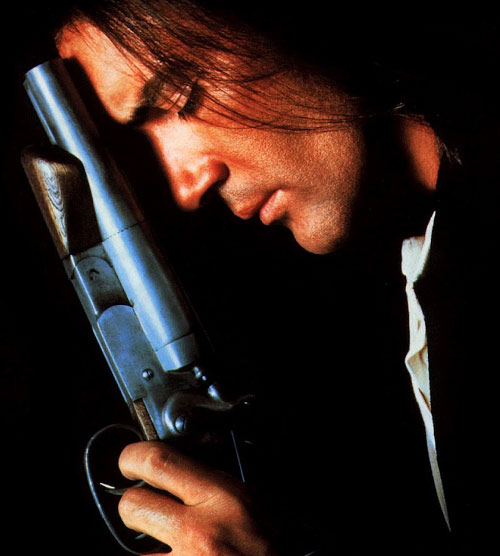 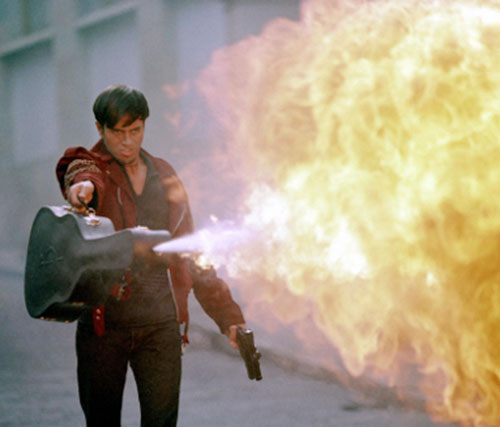