Mr. Horgon is an obscure, early Marvel character. He appeared for but a few pages in the third issue of Daredevil, in 1964.

But he’s useful to have for street-level stories set during the 1960s.

And as with most side note characters who haven’t been seen in decades, it can be interesting to ponder what he’s been up to.

“Ape” Horgon is exceptionally strong. He might approach “peak human” strength levels for his height, as he’s fairly short.

He also is a competent, well-trained wrestler.

One assumes that he’s an experienced criminal. 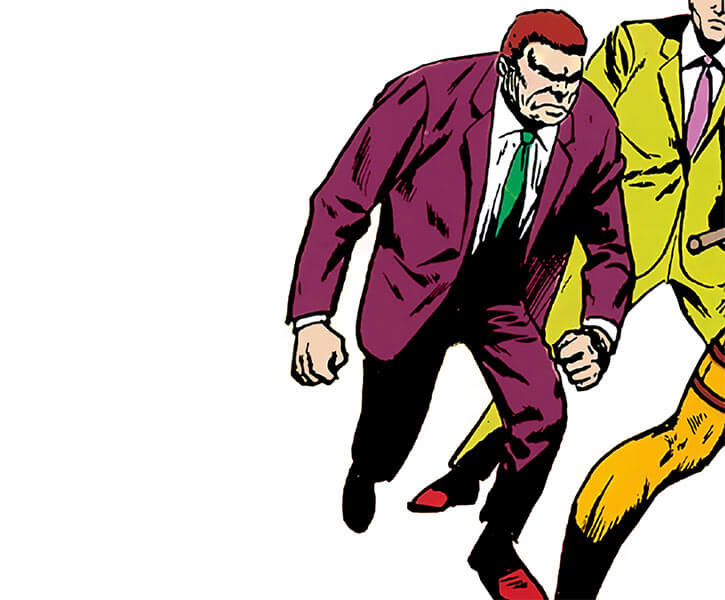 Horgon was once hired by the Owl (Leland Owlsley), early during the latter’s criminal career. He and “Sad Sam” Simms had been shortlisted to become Owlsley’s right-hand men.

To verify his skills, the Owl had Ape wrestle a caged large ape. Ape easily passed the test.

When the Owl first ran into Daredevil (Matt Murdock), Ape and Sad Sam were at his side. However, Ape was surprised by Daredevil’s speed, and sent flying.

Later on, the Owl sent his two underlings summon underworld representatives. But when they returned, the Owl had been defeated by Daredevil.

The place was crawling with cops, who arrested all mobsters present. Possibly including the caged ape. 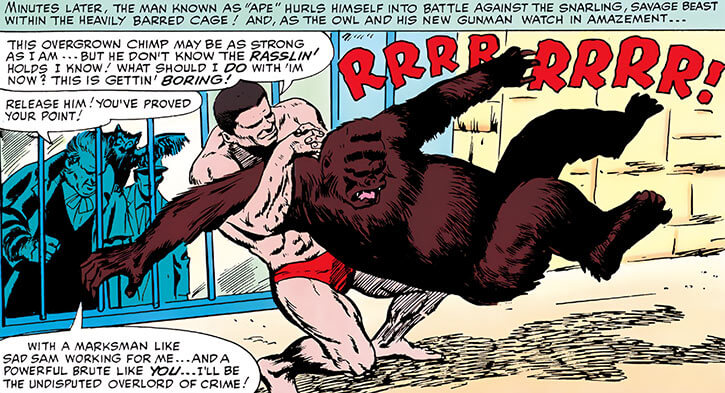 Writeups.org tip of the day – always wear clean underwear in case a prospective employer requires you to wrestle an ape into submission.

Ape Horgon is confident in his strength, but not particularly intelligent.

“A guy who can beat a gorilla with his bare hands won’t have any trouble with one costumed clown !”

He could have been an obscure, early hireling of Hugo Strange.

Some of the stats are stock mobster ones, which he logically has.

It’s not clear what sort of ape Horgon was wrestling. I’m not convinced it actually was a gorilla. So I used the Edge Advantage to give him a STR of 4½ to reflect this haunting uncertainty.