Ape-Man shouldn’t be confused with Man-Ape (M’Baku) or Man-Ape (Eric Gore). That would be silly, ah ah ah.

Keefer was a professional thug.

He was huge and strong, and reportedly had boxing experience. Cap noted that he was better at hitting than at taking hits, though.

He also was an expert climber and acrobat.

It seems likely that he had military experience, perhaps in Việt Nam, since he was conversant with US infantry weapons. He also was a good shot with the Exterminator’s T-Ray pistols. 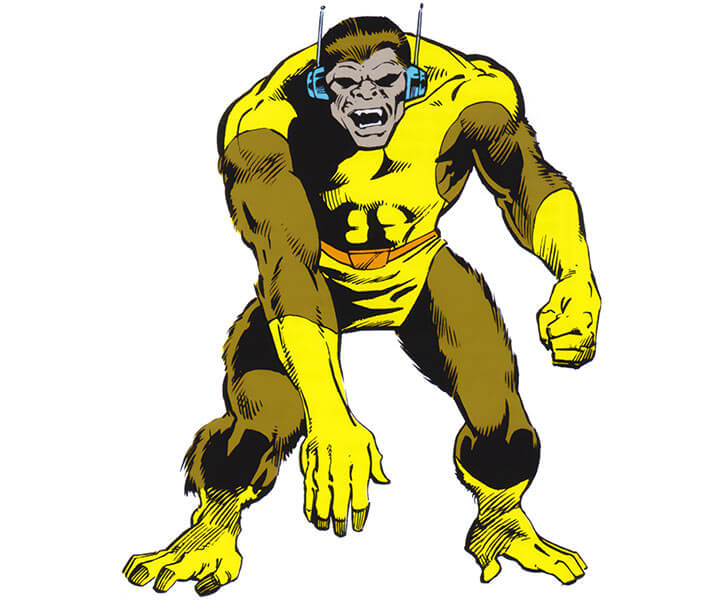 The Ape-Man suit had the usual radio headset and the chest camera.

There also were suction cups on the gloves and boots. With these, Ape-Man could climb up high-rise buildings quickly and safely.

Ape-Man was then turned into a superhuman by Count Nefaria. He thus became a mutate with a gorilla-like appearance.

His intellect seemed diminished, but he clearly had superhuman strength and durability. There’s too little material to be sure, but “Class 25” seems possible given how he bashed Colossus (Piotr Rasputin). 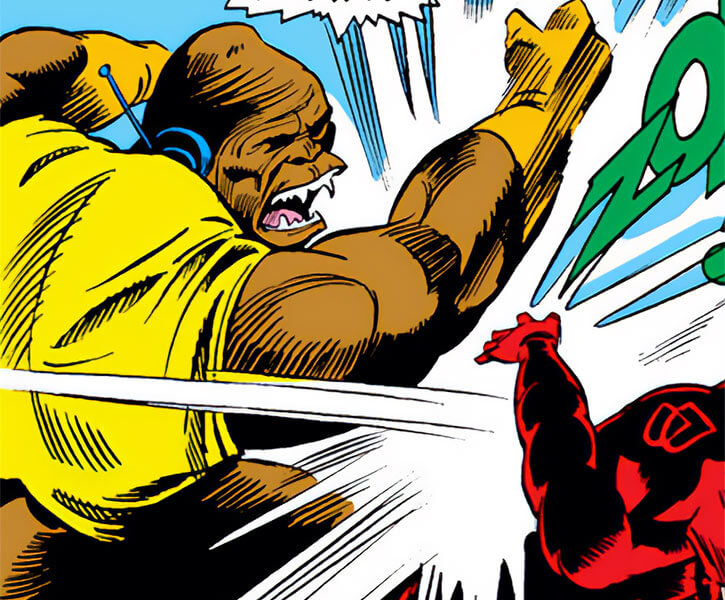 Unlike his colleagues, Monk Keefer was briefly seen before the Organizer recruited his operatives.

He was part of a small crew robbing a Stark factory, and seemed to have been recruited specifically as security. Captain America (Steve Rogers) and Rick Jones stumbled upon the heist.

Monk easily took Jones out, and briefly floored Cap with one punch. But he was then promptly defeated.

He spent but a few months in jail before Cat-Man (Townshend Horgan) freed him. Keefer already knew Frog-Man (François Leblanc) on his new crew.

Keefer was practically always in costume. Maybe he’s sensitive to cold despite his body mass.

He wasn’t originally drawn as big as his official vitals. Said vitals come from retconningMaking changes to a character or story after the fact a minor — but massive — thug seen a few months before into being the same character.

Like the other Organisation operatives, Keefer is a disciplined professional.

He seemed more brutal than the others, but remained loyal and pragmatic.

As a mutate his diction and intellect were diminished. Oddly enough, he now referred to himself as “Gort” (short for Gordon) rather than “Monk”.

He exulted in his newfound strength.

The second Ape-Man worked for Death-Stalker (Philip Sterling) in 1979. He was seen for but a few pages.

McVey was a greedy idiot, and did not seem as strong as Keefer (though he was even larger). He was enough of an acrobat for the rooftop expressMoving across a dense city using comic book acrobatics (and usually a swingline), though the costume helped.

And, inevitably, he was faster than he looked.

Martial Artist (EV) can also be used with his grip, for instance when shredding objects with his hands (+0).

As with the others (save Leblanc), military experience isn’t clearly shown.

The retcon of him being Monk is kinda weird, and he doesn’t seem that strong in his early appearances. However, 1968 and 1974 material do have him suddenly larger and stronger, so it more or less works out. So to speak.

(Presumably, artists and writers just assumed that a guy in a gorilla suit was a strongman, even though in Wood’s vision he was an acrobat/builderer  .)

I considered giving him a 05 with his Weaponry, since he seemed pretty good with a T-Ray pistol. But he also preferred using his fists over a gun. So I guess he was just lucky with a few Weaponry rolls.

Plus, he realised that a Flailing Attack was the way to go with this weapon. This certainly helped with his hit ratio.

Very little material once again. Use Keefeer’s base numbers, but :