Apocalypse is a Magneto– or Luthor-class villain.

He possesses knowledge of various areas of science and technology that is advanced beyond that of the rest of humanity, especially in the area of genetic engineering. He’s also a master strategist. He has a complete control over the atomic structure of his body and some psionic  powers, making him extremely powerful in combat.

Apocalypse’s mind is frighteningly sharp and powerful. For instance, he once found a supposedly safe house of Cable and saw his guns, which he immediately realized were based on his work and his technology. It took him but a few seconds to come to the correct conclusion that Cable was a time traveller from the future and that Apocalypse ruled at least parts of this future.

Apocalypse was born nearly 5,000 years ago, in ancient Egypt. Ugly and malformed, he was abandoned to the harsh desert. The baby was found by a roving band of feared desert raiders known as the Sandstormers. Most concurred that the infant should die.

However, their ruthless leader, Baal, somehow recognized the potential power in the child. He named him En Sabah Nur (“The First One”) and raised him as his own son.

As En Sabah Nur grew, he surpassed the other tribesmen in intelligence and strength. Everyone in the tribe except for Baal hated and feared him for his inhuman looks and great abilities. Nur did not understand their fear, but hardened his heart against it.

Moreover, he believed in the principle that Baal and the tribe lived by, that only the fittest, tested by hardship, would, and should, survive. On the day of his tribal rite of passage into manhood, the 17-year-old En Sabah Nur killed three armed warriors of the tribe using only his bare hands.

At this time Egypt was ruled by Pharaoh Rama-Tut. On the day of En Sabah Nur’s rite of passage, Baal explained to him that Rama-Tut was no god, as most believed.

The Pharaoh was a man, who had arrived in a strange vessel. Years ago the tribe had stumbled upon the time-traveller’s crashed ship, taken the injured man back to their camp, and nursed the injured and temporarily blinded man back to health.

One night he wandered away, taking with him objects the tribesmen had brought from his vessel. Weeks later, his sight restored, Rama-Tut returned, wielding weapons of devastating power and leading the Egyptian army. He massacred the tribe and enslaved the survivors. Although he tortured them, no one revealed the timeship’s location.

In actuality, Rama-Tut was a time traveller from the far future who would later become known as Kang the Conqueror. Kang knew that Apocalypse, one of the most powerful mutants who ever lived, and the one who was destined to rule the world, had been born in ancient Egypt.

Hence, Rama-Tut had gone back in time to find Apocalypse as a child, raise him, and thereby become the master of the most powerful being on the planet.

On the day of his rite of passage, Baal brought the young Nur to a sacred cave whose entrance became blocked by a cave-in, trapping them underground. After a week of wandering without food or water, they found the remnants of Rama-Tut’s timeship within an underground Egyptian tomb.

Baal told Nur that he believed him to be a conqueror whose coming was foretold in ancient prophecies, and that Nur was destined to overthrow Rama-Tut. Then Baal died from lack of nourishment, and Nur, whose mutant physiology kept him alive, vowed to take vengeance on Rama-Tut and claim his destiny. Four weeks later he finally made his way back to the surface.

Nur became a slave, but eventually he had a vision of the Egyptian death god Seth, who urged him to become a conqueror. It was at this moment that Nur first manifested his superhuman powers.

There was then a time when many time-travelling super-heroes, including the Fantastic Four, the West Coast Avengers, and Doctor Strange arrived in Rama-Tut’s Egypt. During this era, the Pharaoh finally came face to face with En Sabah Nur.

Rama-Tut offered to make him his heir if he would swear his loyalty, and then tried to kill him when Nur refused. Nur defeated Rama-Tut’s warlord Ozymandias and Rama-Tut. However the Pharaoh escaped back into the future, eventually to take on the identity of Kang.

Survival of the fittest

From then on Apocalypse plotted the conquest of the planet through bringing about wars and conflict, in which the strong would defeat and destroy the weak. In Apocalypse’s own words he brought “greatness, judgement and destruction” over humanity.

Over the centuries he was worshipped by many civilizations under a variety of names such as Set, Huitzilopochtli, Sauru, Kali or others. Mutants, he was certain, would one day rule the world, with him as their leader, and so he waited. Most of what Apocalypse did during these centuries is as yet unknown. It is thus unclear why he didn’t conquer the world a century or so after his epiphany.

At the time of the Crusades, Apocalypse arranged for the warrior Bennet du Paris to activate his latent mutant powers for the first time. Renaming him Exodus, Apocalypse made him his servant but later cast him into a deathlike trance when Exodus rebelled against him.

In 1859, Apocalypse awoke from centuries of hibernation in an underground chamber in London. It was then that he first met Dr. Nathaniel Essex, who believed that through selective breeding of humans, he could bring about the rapid evolution of superhuman mutants.

Apocalypse offered to transform Essex into a long-lived superhuman being himself to give him the time to further his research, but at a cost : his servitude. Essex accepted, and Apocalypse transformed him into Mister Sinister.

However, the Askani, a clan of rebels against Apocalypse two thousand years in the future, transported Scott Summers and Jean Grey-Summers, also known as Cyclops and Phoenix, to 1859. There they prevented Apocalypse from assassinating Britain’s Queen and Prime Minister.

Apocalypse, temporarily weakened by a virus with which Sinister had infected him, went back to waiting for the proper moment to reemerge. It came a century later, when in a short time the world became populated with a new race of superhuman mutants.

Apocalypse first reappeared as the employer of the Alliance of Evil, a team of mutants who battled the original X-Factor. X-Factor was a group comprised of the original members of the X-Men. After studying the new breed of mutants, he had dedicated himself to bringing about a global war between the various human and mutant factions in order to let the strongest survive.

Subsequently, Apocalypse recruited a team of mutant agents he called his Horsemen. Apocalypse rescued Warren K. Worthington III, alias the Angel, from death. He manipulated him into serving him as the Horseman named Death.

Worthington’s wings had been amputated. However, Apocalypse used his advanced genetic engineering techniques to give him new wings with metal-like feathers. Eventually, however, Worthington forsook Apocalypse and returned to X-Factor, and then to the X-Men.

Later, Apocalypse infected the infant son of Cyclops and Madelyne Pryor, Nathan Summers, with a techno-organic virus. He had recognized that if this child grew up he would be powerful enough to defeat him. The Askani once again stepped in and brought the child to their own time period, two thousand years in an alternate future.

There he was raised by a time-travelling Scott Summers and Jean Grey-Summers to become Cable, who would travel back in time to the XXth century to oppose Apocalypse. He and various x-groups have clashed numerous times with Apocalypse, battles which often took a significant toll on Xavier’s men.

We’ve seen the future and it is murder

At least two Earths are known in which Apocalypse imposed his demented, pseudo-Darwinist vision over the world.

One was an alternate present known as the Age of Apocalypse, which would have happened if Charles Xavier had been killed before he started the X-Men. This alternate universe was destroyed, although four beings escaped its destruction (the Dark Beast, Holocaust, X-Man and Sugar Man).

Another is in the far future, and seems to be a very probable future since much time travel has taken place between it and our present. This is the period in which Phoenix III projected herself to become the Mother Askani, in which Cable and Blaquesmith were born, and in which Cyclops and Phoenix III were sent to raise Cable.

Apocalypse’s appearance is mutable at will, but he generally appears as a gray-skinned humanoid with blue lips. He wears a slightly kirbyesque dark blue costume.

In the DCU, Apocalypse appeared in the post-Crisis timeline instead of the Immortal Man. He was the other prehistoric man irradiated along with Vandal Savage, and the one who has been fighting Savage over the millennia as their interests are in direct conflict.

It has since been revealed that the Immortal Man had in fact been replace by the Resurrection Man – but there’s no reason not to have three immortals, and they’ll be better at neutralizing each other.

Apocalypse is almost completely tied to the theme of the mutants in the MU, and may not be completely portable in the DCU. It mostly depends if you are using the mutant theme. If not, Apocalypse is simply a very powerful, very ancient villain and not an Earth-shaking threat.

As a non-mutant villain he could appear to have knowledge of some great future event (perhaps the 2011 DC reblaunchoot … or the Great Disaster of Kamandi fame ?) and be constantly weeding the unfit to make sure humanity is strong enough and worthy to fight in this future struggle.

Connections:
Unknown, although he probably retains contacts within the groups he founded. A Low connection with Mister Sinister is likely, and if Genesis is alive he retains a High connection with him.

Drawbacks:
CIA to his cause, Archenemy (Cable), Misc : it is known that in many centuries, Apocalypse’s immortality will start to wear off and he’ll have to transfer his mind to various bodies, changing bodies after they are burned up. 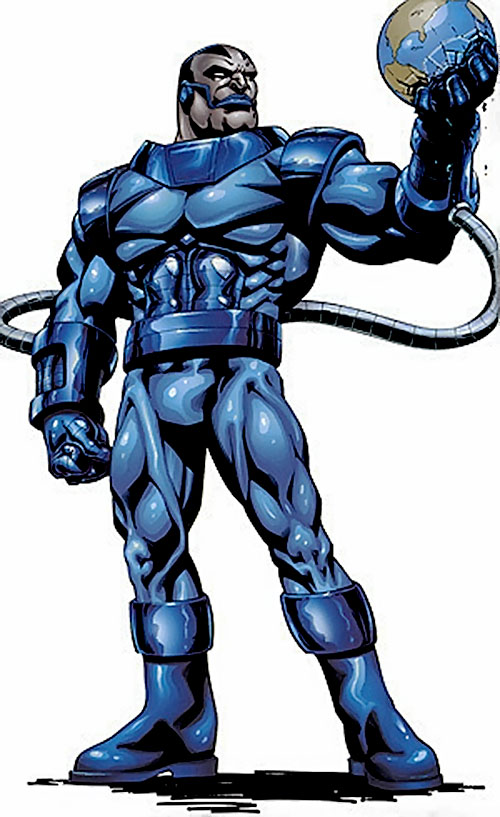 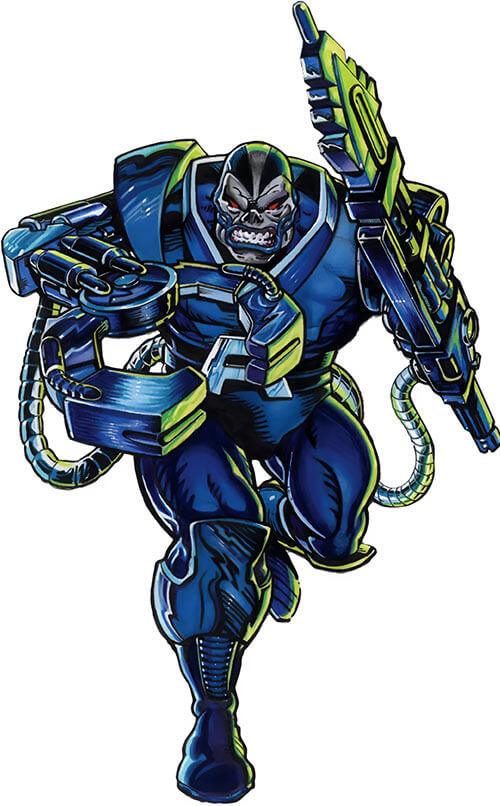 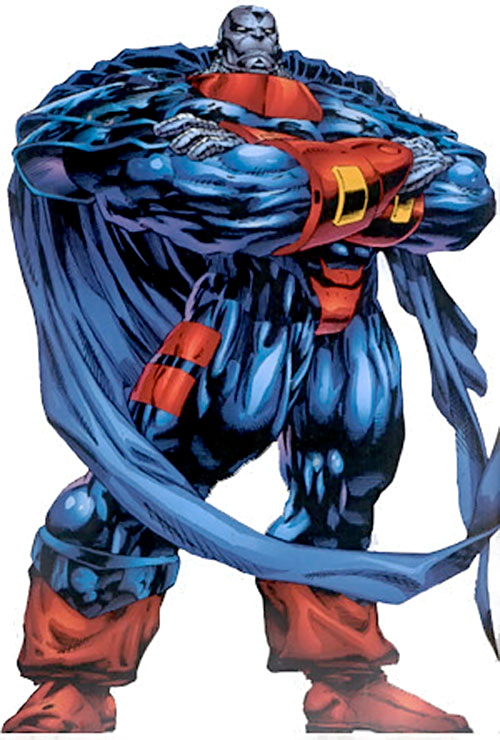 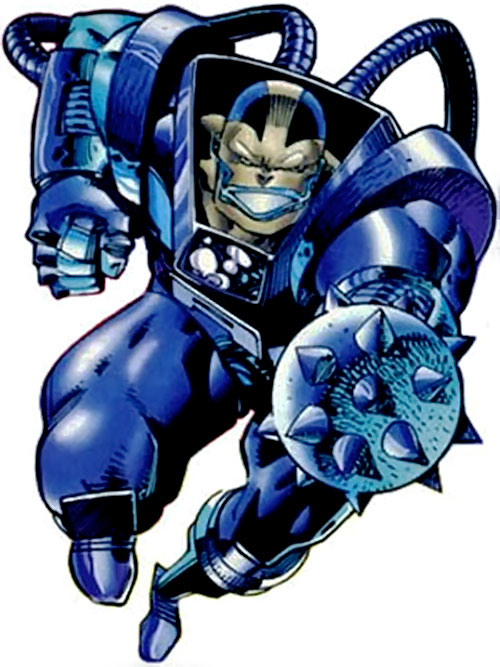 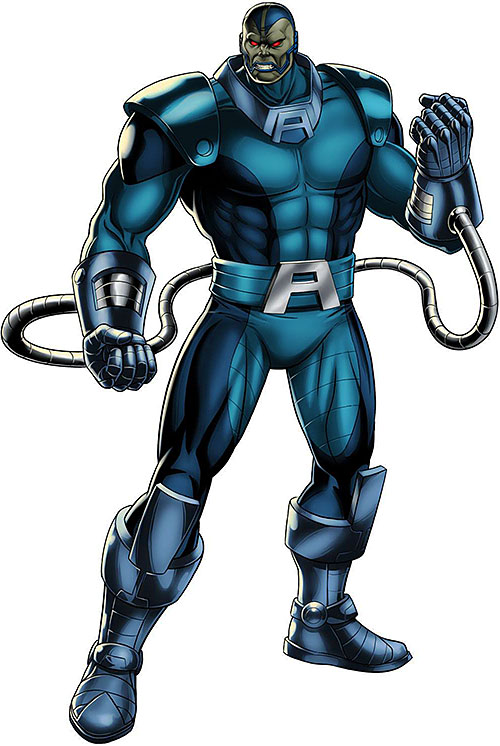 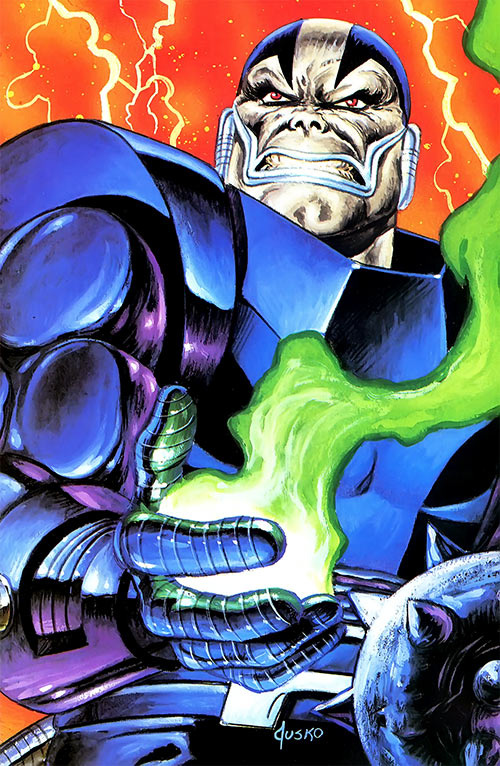 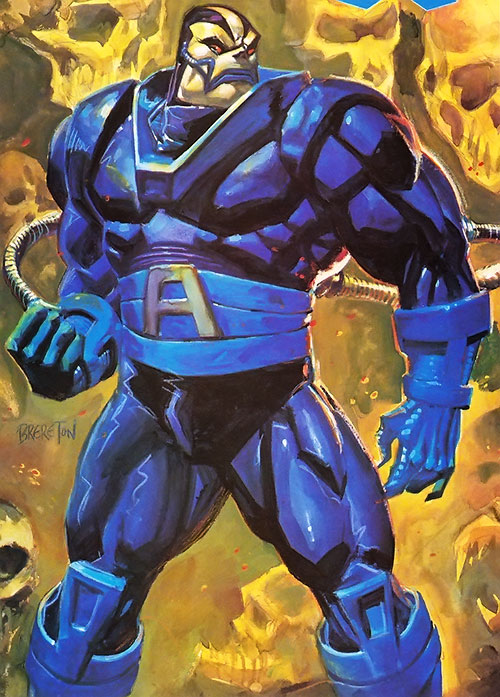 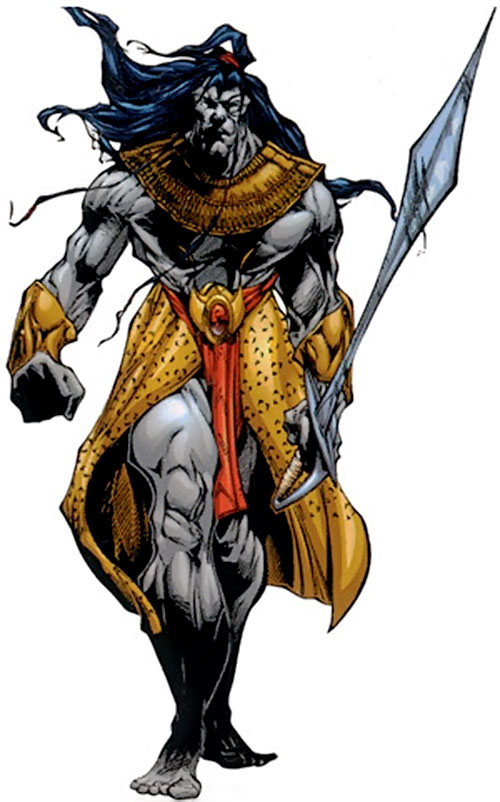