Pacifiers are huge humanoid combat robots – apparently one of the high-end Apokolipsian fighting machines. They are strong enough to batter Superman around, extraordinarily fast, and their right arm ends with an atomic flame thrower.

They are very well-armoured – the plating is dense enough to defeat Superman’s X-Ray vision. However, like with many robots, they are relatively easy to destroy by a creature of sufficient strength. In their case though, that means somebody who’s at least as strong as Wonder Woman, Orion or a Kryptonian.

The Mayfair Games stats include sensors (audio, infra-red, visual magnification) that are not demonstrated, but are likely present. Like most Apokolips robots a Pacifier will self-destruct when near defeat (to take opponents with him and prevent scavenging), though it is possible to damage it badly enough in one blow that the bomb won’t trigger.

Pacifiers have a decent AI capable of small tricks in combat, and can speak. Thus, Superman initially thought that the one he encountered was somebody wearing a suit of power armour. Given their power, Pacifiers tend to be overconfident and boastful – they fight cruelly rather than efficiently.

The Pacifier whom Superman encountered held a nasty surprise. A Glommer was imprisoned within, and could lunge out when the Pacifier was damaged enough (Current BODY Condition of 02 or less, in DC Heroes terms). 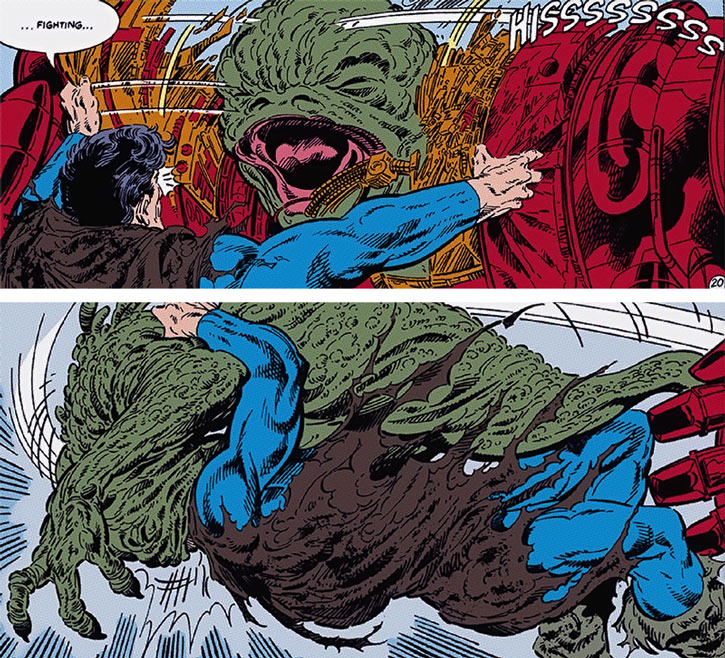 Glommers are gigantic amphibian-like creature with a huge mouth, clawed reptilian arms, a tail and no rear legs. They are reportedly native to Apokolips’ networks of caverns, where they eat mutated mosses and fishes. They then sleep as they digest.

Only one Glommer was ever seen. It pounced on the surprised Superman, gobbling his head and wrapping its tail around his body. A psychic field within the Glommer’s mouth then induced a seizure in the Man of Steel – which involuntarily triggered his power of flight.

Paralysed and with his head still within the creature’s maw, Superman crashed right into one of Apokolips’ Fire-Pits.

Advantages
Misc.: successfully Grappling/Wrestling means that the Glommer’s mouth is covering the victim’s head and shoulders, which usually cuts off most senses.

Drawbacks:
MPR (a Glommer’s land speed is but 02).

Note:
Remember that if a Glommer Blindsides its target (by bursting out of a Pacifier, by using its Military Science (Camouflage), etc.), which it will try to do, it gains a special +2CS Bonus to the OV/EV of its initial Grappling or Wrestling attempt).

This is refurbished, expanded, illustrated version of the Mayfair stats in the Apokolips sourcebook.

It assumes that Superman has a DEX of 10.

By Scott Maykrantz for Mayfair (original stats) and Sébastien Andrivet. 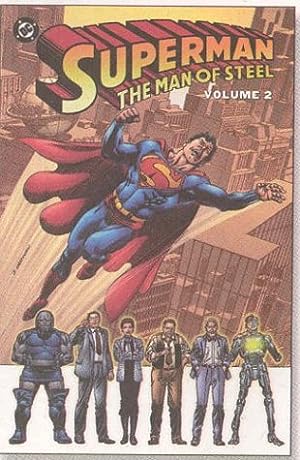 Superman: The Man of Steel, vol 2