Apollo is powered by a convertible energy reserve charged by pure sunlight. The full range and extent of his powers are astounding. He can supercharge his powers and he regularly spends loads of Hero Points  to perform even more astounding feats (such as sterilizing the entire Moon).

It has been hinted that he absorbs the Sun’s ultraviolet rays in a manner similar to photosynthesis. Absorbed energy is stored in limited quantities inside his body and can be summoned up whenever he wants to for several powerful and useful abilities. Apollo’s most prominent abilities are super strength, flight, near invulnerability and the projection of solar blasts from his eyes.

It seems he can survive indefinitely in the vacuum of space by simply not breathing, and he does not require food nor drink to survive either (still, of course, he does enjoy to eat and drink).

However, with no exposure to sun light, he will quickly deplete all of his powers, starting with his ability to fly. Whenever he requires unusually high energy levels or seeks to heal himself faster, he charges up in the extreme heat close to the Sun’s corona. 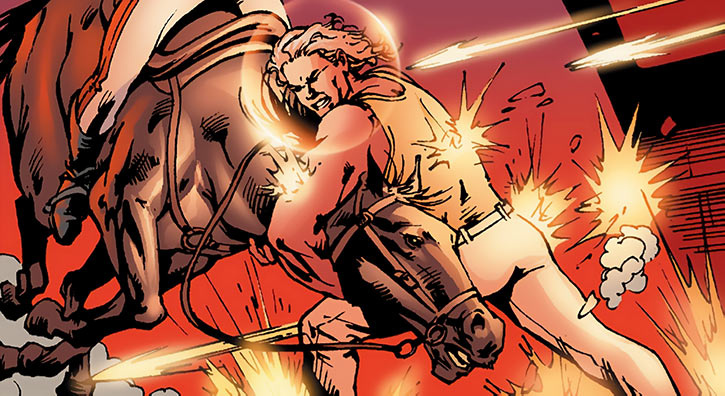 Apollo’s upper power limits are unknown. When at his normal upper charge, he has been able to fly halfway around the world in half a minute, although he once managed to encircle the globe in 60 seconds flat in a supercharged state.

At full normal charge he can also withstand the molten heat at the Earth’s core, destroy entire spaceships by flying through them at intense speeds, and practically level entire city blocks.

Apollo is an athletic and attractive male with long white hair usually seen in his white and gold costume. His possibly most known trademark is the sunny halo glowing around his head, and the powerful light displays he emits as he uses his powers. Apollo is usually seen flying towards some destination as people point at him in both adoration and fear.

When being a civilian, he is casually seen in a pair of jeans and a t-shirt.

Apollo usually has a sunny disposition and a good mood. He is generally regarded a great hero by the public and will be greeted by autograph hunters and cheers. He could arguably be the greatest superhero on the planet if it wasn’t for the fact that too many also fear him.

This is because he is rather quick-tempered and when perceiving a threat he does not hesitate to use lethal force. Furthermore, he belongs to a radical superhero group that enforce their own brand of justice, a fact that does not sit too well with the most.

He truly loves the Midnighter whom with he has shared so much after he became first a vigilante, and then a global superhero. The two of them recently got married, becoming possibly the most famous homosexual celebrity couple on the planet. Their adoptive daughter, Jenny Quantum, is also considered close family and he will play the father routine with her despite her having grown up into a young woman.

As to the other members of the Authority, the Doctor just spooks him out. Apollo regards him as possibly the most singularly unattractive man he has ever met. Jenny Sparks used to tease him, but he took that in a good light. Although he mostly spends his time with the Midnighter, he is also friends with the Engineer, Jack Hawksmoor and Swift.

Apollo is an excellent team player and an asset to whatever group he is working with. Having lost all memories from before he got his powers, he feels estranged from his native society, and so the Authority provides him with a safe haven, a home and a purpose. He is a firm believer in working for a Better World.

In his spare time, Apollo employs his artistic sides to do paintings. He also practices Zen exercises and meditation. In the way of music, he enjoys listening to, for example, Doris Day . Apollo is also a great partygoer and gathered crowds of normals as well as other superheroes in the parties they used to hold on board the Carrier.

“You know, maybe I could understand if you’d done all this for altruistic reasons, if you really wanted to change the world… but if the best thing you can think of to do with all that power is to take advantage of some zombified actresses… well, that’s a little pathetic, isn’t it ?”

“Thinking about how I’m going to snap every bone in that clown’s body and shove his friend’s mace so far he’s going to need 8 years physiotherapy and a good proctologist to walk again.”

Apollo is presumably the Superman analogue of Earth-50 (the Wildstorm Universe).

Apollo is called the Sun God for good reasons. He derives all his mighty Powers directly from the energy of the Sun. His body stores up solar energy that he can choose to employ for a wide array of uses. His energy is released relatively fast and he commonly expletes himself to empty before having time to recover.

It is a typical case of “burns twice as hard, but twice as briefly”. Despite being enormously powerful, and initially unstoppable, he can be beaten relatively easily when he has burned up all his stored solar energy. He is extremely durable and bulletproof while charged up and can still take extreme amounts of punishment and survive when depowered.

It can be assumed that over a very long period of time without sunlight his BODY score, which is usually the last ability he looses, would fall down to a human maxima of 06 APs. Whenever he is completely depowered, it will take over one full minute in direct sunlight to have charged enough to be able to fly again.

As a rule of thumb he will charge up his Power Reserve APs equal to APs of time recharging plus any HPs spent (after at most 6 hours, or 13 APs, he’s completely recharged, although he has managed to fully recharged in as short a time as 2 hours).

This writeup depicts Apollo as presented in most of his appearances. However, after the events of World’s End, he has changed. These are the changes required to use him during this era: His solar charge now depletes much faster and leaves him weaker than it ever did before (Power Complication Subplot).

For this reason he more or less constantly stays near the sun, only coming down to Earth when necessary. Because of this, Apollo is only capable of fighting for short periods of time, in fact only less than a minute on ground level, before having to leave for a recharge.

His recharging, however, seems much more effective than before as it has been shown that he can even reform bone by being in the sun. He then likely has the Regeneration Power at 0 APs, which is boostable by his Power Reserve.

Time needed to recharge up his Power Reserve was more equal to the APs of time recharging times two plus any HPs spent, making it much more effective than previously. His current power status and recharge rate are unknown.

Source of Character: The Authority v1-v5, Authority one-shots and miniseries. 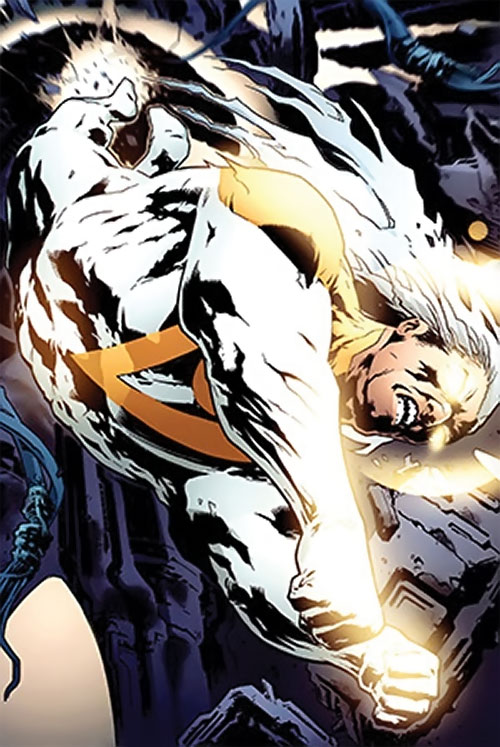 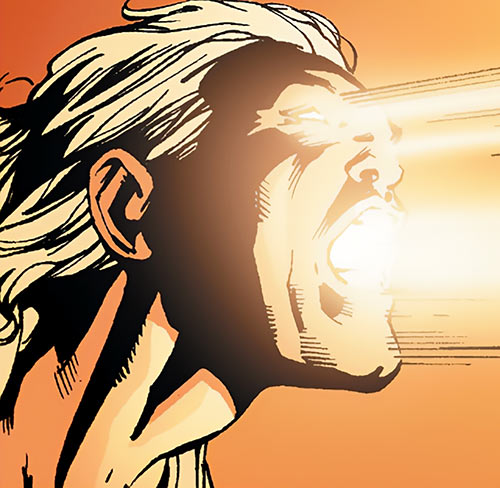 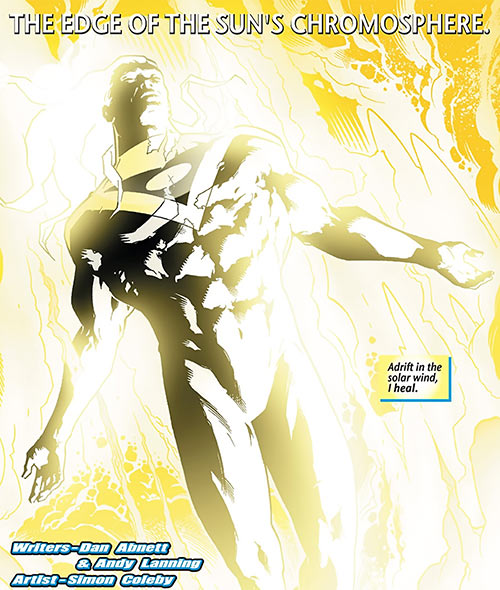