Apparition can disperse the molecules of her body, allowing most matter and energy to pass through them.

Tinya split at birth, and her Bgztler/Carggite physiology allowed her to survive the extended split. She recently reclaimed one of her bodies (Phase of L.E.G.I.O.N.). It is unrevealed whether she can now split into two if she chooses to.

Her mother’s position of responsibility forced similar responsibilities on Tinya at an early age. Thus, she often found her desires stifled, and failing to please her perfectionist mother despite this.

She thought this would change when, on the day the Legion of Super-Heroes was introduced to the United Planets council for approval. Tinya used her native Bgztlr intangibility to help them prevent White Triangle thugs from blowing up the U.P. building. She even helped with apprehending the perpetrators.

From there, Ms. Wazzo was allowed by her mother to accept their invitation. She joined their ranks with the code-name Apparition.

But just as she was beginning to enjoy herself, she found her mother trying to exert control over her. Worse, the ambassador was using her influence within the United Planets to control the Legion. Her attraction to Ultra Boy of the Workforce, a rough-and-tumble, streetwise young man, only made things worse.

But Tinya’s friends stood by her. Their support helped her bear the more difficult moments as she hoped for better.

Unfortunately for her, they failed to come. Before her situation could improve, she found herself fighting alongside Ultra Boy against four White Triangle Daxamites out to ravage Earth. While the two of them celebrated the apparent defeat of one of them, their foe had enough left in him to blast them with his laser vision, apparently killing her.

This also gave her mother even more reason to oppose the Legion.

You can’t kill a ghost

However, she somehow managed to take advantage of Ultra Boy’s invulnerability. Tinya thus survived, in some ethereal state, inside his body. This caused him great pains. But eventually, she managed to extract herself from his body. 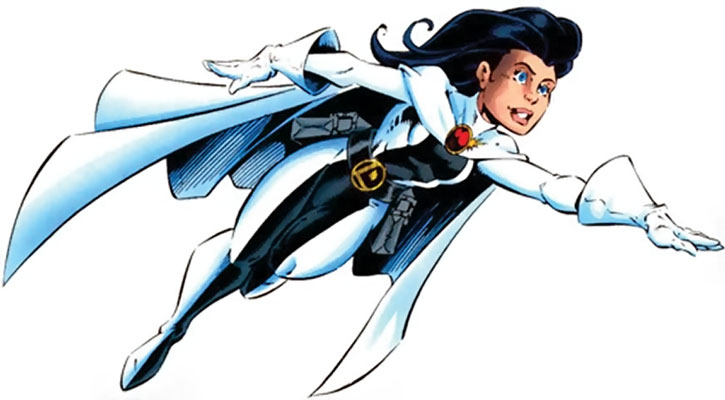 For a while, only he and her no-longer-vengeful mother knew that she has returned. Her ethereal form was even undetectable to the nearly-omniscient Emerald Eye of Ekron, allowing her freedom of thought when it later took over the Legion. By phasing  through the possessed Saturn Girl, Apparition managed to free her, enabling Saturn Girl to detect her as well… and start fighting the Eye.

She was flung back to the 20th century when the Eye responded to a command to turn back time. In this era she met Deadman, who helped her regain some of her substance. Apparition could now become visible to all, though still intangible. She also became capable of affecting machinery by passing through it.

Her frustration over her inability to touch Jo caused her, for a while, to doubt that he would remain faithful to her. But he allayed those fears… by marrying her.

During the honeymoon that followed, she discovered that her father was actually a Carggite. Furthermore, he had stolen two of her bodies as a baby and handed them over to the Luck Lords in payment for his gambling debts. One of her two other bodies grew up in servitude to the Luck Lords until she was flung backward through time, where she had become Phase of the 20th-century L.E.G.I.O.N..

(For more about this clusterflange, see our Phase of the L.E.G.I.O.N. character profile.)

Upon meeting one another, Phase and Apparition merged. After they returned to the 30th century, they discovered the full nature of their shared existence.

She wears a mostly white costume, adorned with her touchstone, a Bgztlr symbol of their abilities.

Tinya is very friendly and outgoing…when her mother isn’t around, that is. Tinya and her mother don’t get along, and Tinya is afraid of her a little. She has found strength in her husband, Ultra Boy, though.

Drawbacks:
Minor Irrational Fear (Standing up to her mother). 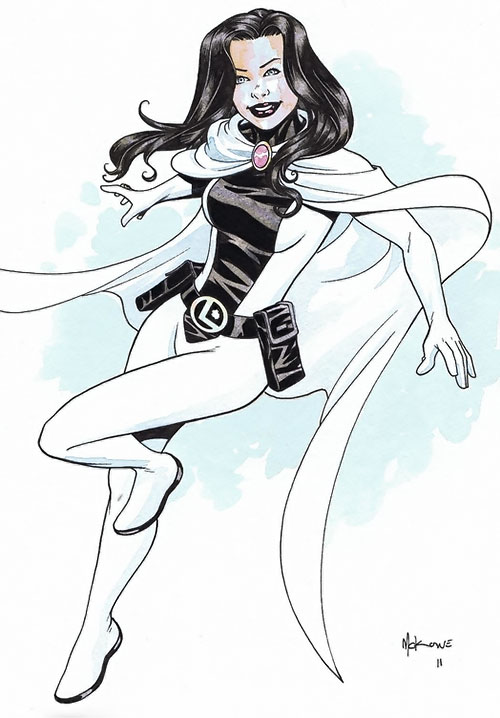