The angle was to show what would have happened if Stan Lee had created a super-hero universe with characters named “Superman”, “Batman”, “Wonder Woman”, etc. These characters resemble the DC ones, but clearly have a different style.

These are useful to populate home-designed role-playing game worlds, if you need archetypes with a twist.

Aquaman can apparently mimic the properties of any substance or being found in large quantities in Earth’s oceans. The limits of this ability are unknown. But it probably makes him one of the most powerful persons in the world.

In practice, most of the time, Aquaman is a being constituted of animated, translucent water. This alone gives him great durability, mobility, flexibility and strength. Most attacks pass harmlessly through him (in DC Heroes RPG terms, Skin armour). He can also shoot high-pressure water jets from his body.

These jets (Mental blast) can be used to cut through metal at their highest force. They can also be used as much less deadly concussive blasts. Raymond can also project a wide and heavy spray they can blind and disorient opponents (Fog).

Aquaman can also shoot himself forward or in the air, propelling his body like water shooting through a hose (Jumping, Running).

Surprisingly, Aquaman doesn’t have something like the DC Heroes RPG Fluid Form Power. For instance he cannot pass through an ordinary chain link fence, even though bullets blow through him with little resistance. Perhaps he’ll develop this ability later on.

A tingling sensation in the back of the neck alerts him of danger, which he has compared to the instinct of some fishes. Presumably spiderfishes. That was a joke.

As he refined his powers, Aquaman learned to telekinetically control volumes of water.

Rob Raymond knows an awful lot about the ocean, both academically and from personal experience. He’s a gifted marine biologist, specialising in genetics.

Rob Raymond’s passion has always been nature, and in particular the sea. A staunch environmentalist since he was a boy, he made a name for himself as he grew up. His rep was both as an activist (working in the field to protect endangered species, contain oil spills, and the like) and as a marine biologist.

Raymond soon became an experienced sailor and diver. Yet he dreamt of exploring the sea in an even more direct way. Thus, he worked on DNA manipulation. His goal was to rewrite his own genetic code using dolphin DNA to turn himself into an amphibious person.

Rob’s brother, Frank, was just as driven. But his own passion was police work. He deemed this eminently more practical and beneficial to society than his brother’s activism and academic pursuits. In this, Frank Raymond followed in their father’s footsteps. The elder Mr. Raymond having been a very well-regarded policeman with the LBPD.

Despite this point of contention both brothers remained lifelong friends, often visiting each other.

Once Rob Raymond perfected his dolphin DNA serum, he decided to impress his girlfriend Amelia. He took her on his boat for the day and injected himself with the serum whilst diving. As he proceeded, however, he ran into unplanned difficulties.

A patch of ocean near his diving site started glowing green, panicking the sea life. This unfortunately included a bull shark. Raymond, who just wanted to test how long he could stay underwater after injecting himself with his concoction, thus found himself swimming for his life.

Swimming into the green patch to find some cover, Rob Raymond found himself surrounded by strange lights and eddies. Though he felt strange and dizzy, he was relieved to see the shark inexplicably swimming away.

However, seconds later, he was shocked to discover that he had mutated into some strange watery creature. Thankfully he reverted to a fully human form as soon as he got out of water.

The puzzled Raymond decided to sail home and do tests, but his boat was attacked by a small pirate crew. He tried to fight back to defend Amelia, but was soon overwhelmed and thrown overboard. Turning into a water person again, he dispersed the pirates, their bullets harmlessly passing through him.

After the Coast Guard arrested the marauders, Rob sailed back to port. Though Amelia had been knocked unconscious during the incident and had not seen him transform, she was fine. 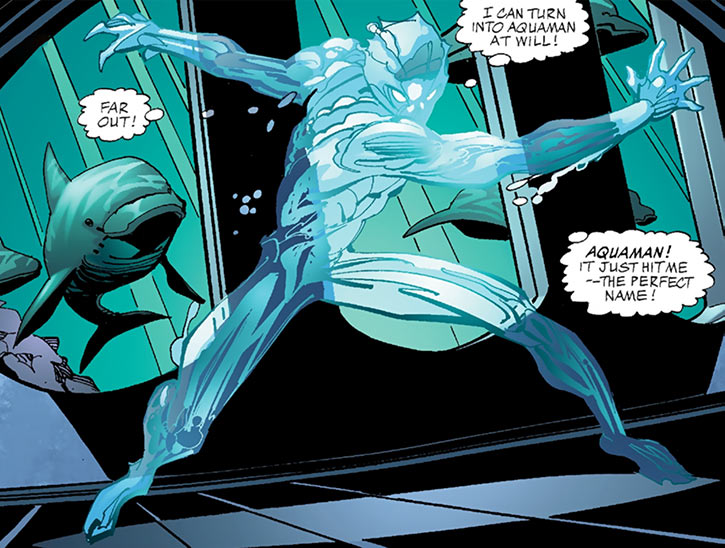 Testing his abilities, Rob came up with the name “Aquaman”. As he explained his transformation to his brother, they were attacked. The pirates had been released, and had been looking for Raymond to avenge themselves. One of their shots went through Frank’s right knee, and Aquaman chased them.

The pirates fatally crashed their car in a panic. Meanwhile Frank Raymond was hospitalised, but the prognosis was not good. It was feared that he would never walk again without the help of a crutch.

Guilty about this, Rob told his brother that he would be a crimefighter until Frank could walk. This way, there would be at least one Raymond serving the law as their father would have wished.

Just one league, and not under the sea

Aquaman and his brother soon came to be threatened by Reverend Darrk and the cultists of his Church of Eternal Empowerment. They twice tried to kidnap Frank to use him as an hostage against Aquaman. This did not work, in part because they underestimated the handicapped Frank Raymond.

Aquaman was later summoned to reinforce the Justice League of America against the menace of Crisis. Crisis was the entity Darrk had been seeking to summon. Though Crisis summarily teleported Aquaman deep into a desert to get rid of him, Aquaman survived and made his way back.

Aquaman is still part of the extended JLA roster.

Raymond is a smart, well-meaning activist struggling for the greater good. He defends both the environment and the well-being of people everywhere. While his passion is the sea and sea life, he’s also motivated by familial history to serve and protect if he can.

While few opportunities to do so existed before he became Aquaman, this is now a much more important part of his life. Especially as he feels guilty about what happened to his brother.

Rob’s commitments and passions did not leave much room for further characterisation. He seemed to be Peter Parker-like to an extent – albeit with a much more enjoyable life.

“People should think more about the seas all around us, Amelia.”

(Surrounded by enemies) “Since it looks like we’re gonna be pals, you can call me Aquaman.”

Bonuses and Limitations:
Gadgetry is limited to biochemical applications.

The temptation of flesh

In his human form, Rob has the following stats block:

Bonuses and Limitations:
Gadgetry is limited to biochemical applications.

Equipment:
Rob owns a houseboat, a powerboat and a New Beetle car.

Aquaman was the least developed of the main characters in the story, and this entry thus has to make a number of assumptions stats-wise due to a lack of material. 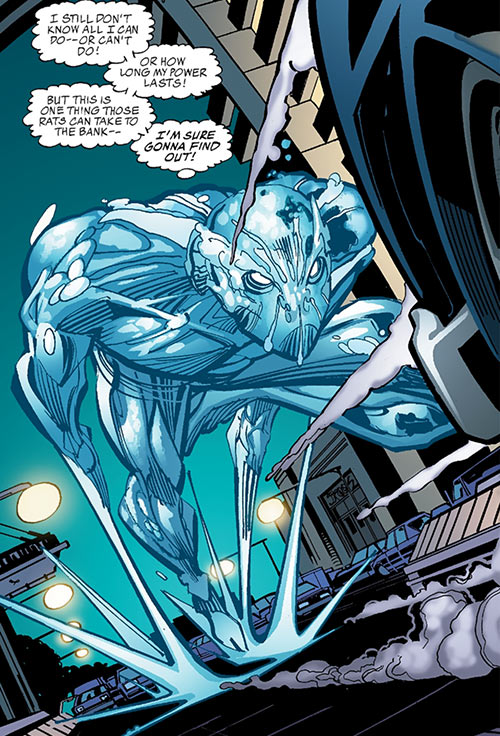 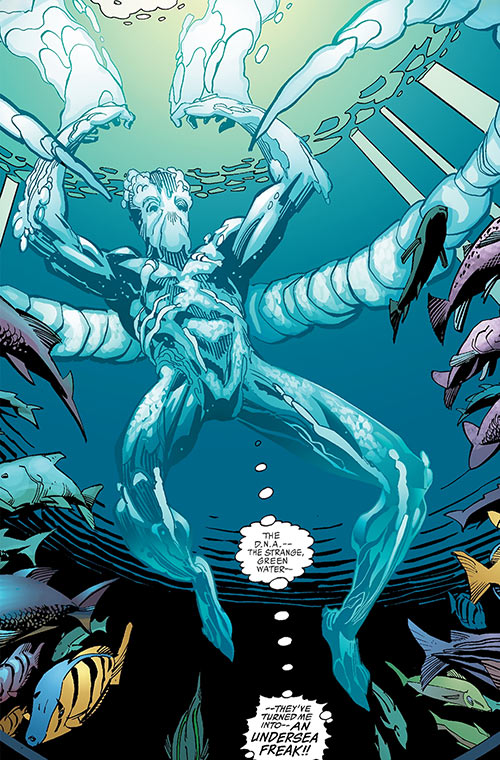 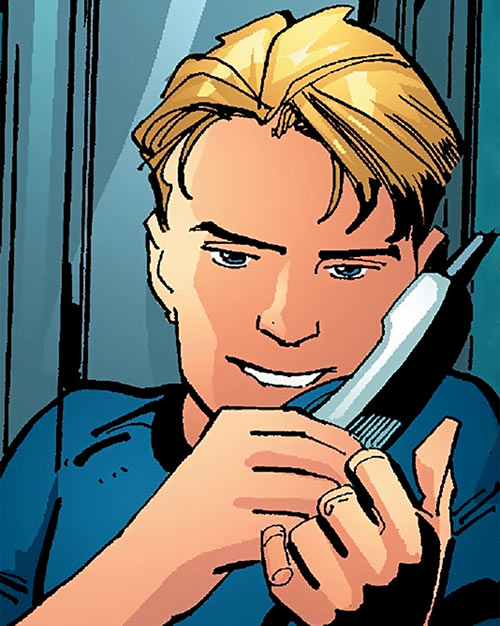 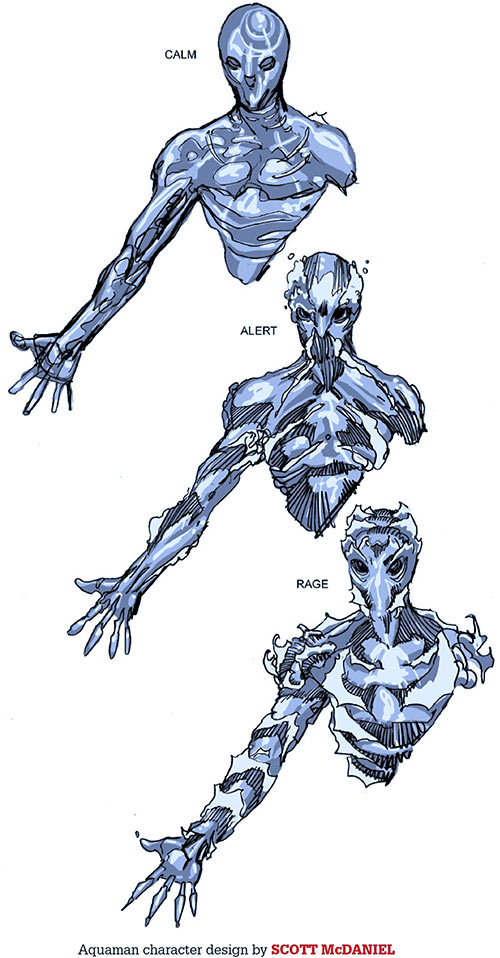 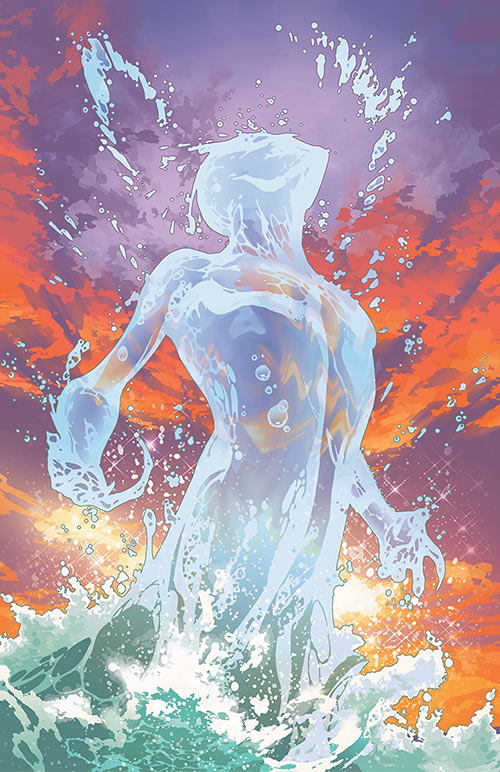