Aquamaria’s entire body is composed of water, which she can control. This liquid form can survive trauma as great as being vaporized and recondensed.

Aquamaria can also control water outside of her body, liquid or frozen. And she can move quickly through other bodies of water.

Maria only speaks Spanish. But in Dakota City, her lack of English skills isn’t much of a hindrance.

Aquamaria is a Bang Baby, a gang member who received superhuman powers in the wake of the Big Bang. The Big Bang was supposed to be a rumble between all of the major gangs of Paris Island to settle their turf wars, once and for all. The Dakota City Police Department learned of the impending showdown. They developed a special tear gas that also contained a radioactive marker.

Their plan was to use the gas to break up the Big Bang. They would then trace the gang members down the next day by tracing the radioactive “tags.” Instead, most of those exposed to the tear gas died. The handful of surviving gang members that lived had all developed superhuman abilities.

One of the Bang Babies, Rolando Texador, took the name Tech-9 after his favorite type of pistol. Texador gathered his fellow survivors together with a proposal. Tech-9 wanted to form a new gang, the Blood Syndicate, with the aim of achieving substantive positive social change.

They took over an abandoned door factory, which they simply dubbed The Factory. Operating from The Factory, the Blood Syndicate smashed crack houses throughout Paris Island, trying to rid the neighborhood of the dealers while taking the money captured in these operations to fund their activities.

In the course of their work they would acquire new members, and put an end to many threats in Paris Island. One of those new members was Aquamaria, who first met the Syndicate while they battled their greatest enemy, the Demon Fox. She was inspired by their work to clean up their neighborhood, and joined them.

One result of the Final Crisis series was the integration of the Milestone Universe into the mainstream DCU. The cataclysmic events therein destroyed the universe in which Milestone took place.

However, the powerful psychic Dharma was able to harness the power of Rift, the powerful being behind the original Milestone/DC crossover, to save his universe’s inhabitants. The two realities have been merged as if they were always one. Dharma altered “histories and memories of both, but only enough to smooth out any inconsistencies.”

Aquamaria is a mass of water that can take any shape. She usually adopts the shape of her original body, a teenaged girl.

Aquamaria is a Good Samaritan, dedicated to helping others.

She is also a very private person, tending to speak rarely and keep to herself and her family.

(While leaping into a small water tower) “Voy a vivir aya — ‘my house’.”

The Big Bang and the Blood Syndicate can dropped whole cloth into any urban area where gang activity plays a major role. Aquamaria can be used individually as a low-level metahuman patrolling the waterways of any coastal town.

Advantages:
Area Knowledge (Paris Island, Dakota Riverfront, James River), Expansive headquarters (The Factory, though the Blood Syndicate may have a new base of operations after its disbanding and subsequent reformation), Language (Spanish).

Drawbacks:
Fatal Vulnerability (being separated from water for more than 16 hour (14 APs)), Miscellaneous (Aquamaria does not speak English, though this is a minor Drawback given the number of Spanish-speaking people in the Paris Island area). 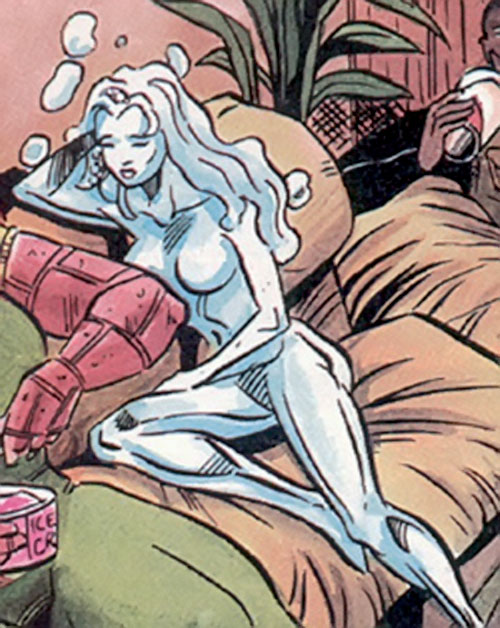