Seeking shelter in an underground tomb in the eastern desert of Egypt, Abdul Qamar discovered a magical scimitar and a flying carpet. These had belonged to a 13th century ancestor who had been a champion of his people.

Qamar decided to carry on his ancestor’s tradition by battling evil as the Arabian Knight.

The Knight goes shirtless, emphasising his athletic physique. His skin has a deep ruddy tan due to countless hours in the desert sun, though it’s often erroneously represented as red like the American Indian). He has a spade like beard.

Qamar wears baggy white breeches of silk. His sash and boots are crimson in hue, and he wears red metallic bracers. He carries a golden scimitar. Atop his head is a white turban with a red ruby on the brow. 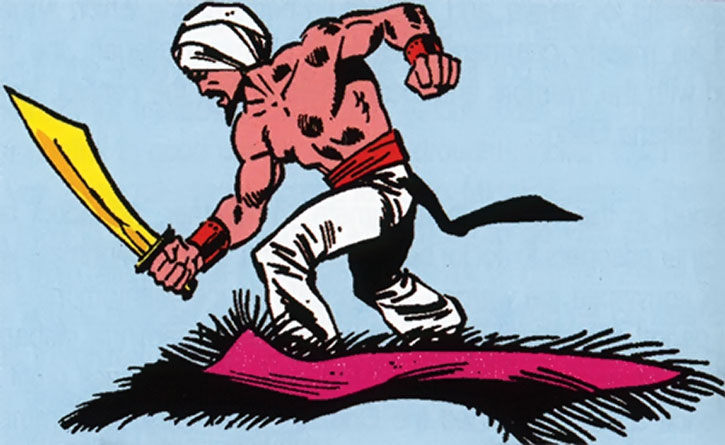 He seems a man borne out of his time and is a great admirer of history (especially of his own lineage and culture)and maintains a somewhat dashing image as both a superhero and in his everyday life.

Abdul rarely adventures out looking for trouble, but is always ready when trouble looks for him.

Arabian Knight possesses powerful mystical artifacts created by “Magicians of the East”(from Hulk #257). Their purpose was to combat ’otherworldly evils’ such as Gog and Magog.

When I think Egyptian Golden Magic Items in DC, I think of Dr. Fate, and the Lords of Order. Perhaps they bequeathed these items to Abdul’s XIIIth century counterpart to combat agents of the Lords Of Chaos (which Gog and Magog could easily have been).

Or perhaps it was another attempt by the mighty wizard Shazam to forge a new champion of justice after the Black Adam disaster, which failed due to his the using power of the Lords of Order instead of the power of gods.

Bonuses and Limitations:
Telekinesis works on Carpet and Sash only.