Archangel is a magnificent, enhanced warrior. He has an eagle’s sight, and an armored jumpsuit is surgically grafted to his skin (the cowl, however, can be pulled back). Most of his abilities stem from the gigantic (yet highly flexible), razor-sharp, metallic wings on his back.

The “feathers” can be launched from the wings, and are tipped with a paralyzing neurotoxin which shocks the target. Worthington is immune to that toxin. 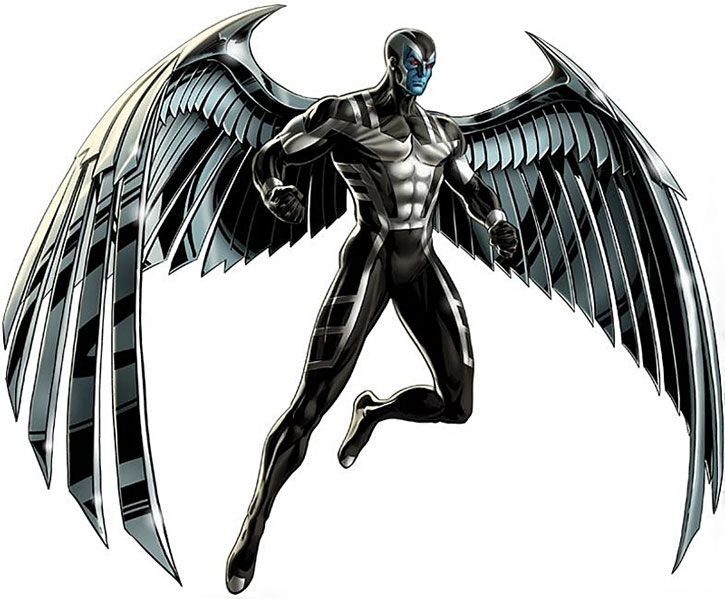 The wings are quite independent, and have been known to act of their own, even when Archangel wasn’t aware of the situation (thus their “pet” status in DC Heroes terms). While it first seemed that the wings had their own, bloodthirsty consciousness, it was ultimately revealed it was Archangel’s subconscious that was motivating them.

Worthington changed his will, leaving his fortune to X-Factor, thereby unwittingly playing into Hodge’s plans. Shortly afterwards, in despair over the loss of his wings, his breakup with Southern, and the controversy plaguing X-Factor, Worthington apparently committed suicide in a small aircraft that exploded. 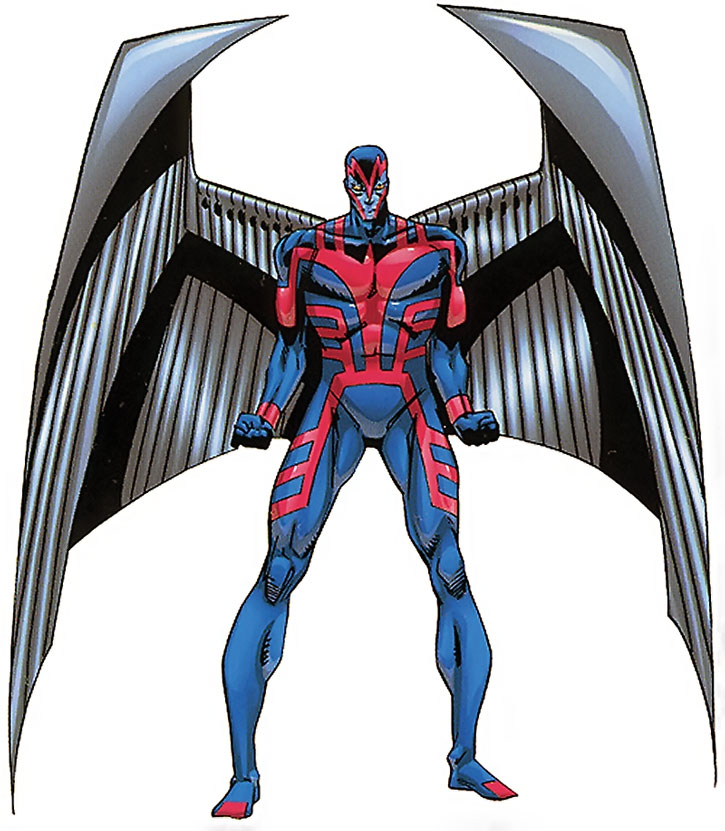 However, Worthington was teleported to safety by the mutant Apocalypse who, through genetic manipulation, caused the Angel’s wings to grow back in a new form. His views towards the world radically altered by his recent traumatic experiences, Worthington became one of Apocalypse’s warriors, the so-called Four Horsemen of the Apocalypse, and took the name Death.

As Death, he battled the other 4 founding members of X-Factor, but he was shocked into ending his attack when one of the X-Factor members, Iceman, faked his own demise. Abandoning both Apocalypse and X-Factor, Worthington flew off to live in solitude. He then rejoined X-Factor and adopted the new name of Archangel.

As can be glimpsed, Angel’s skin is now of a light blue hue. 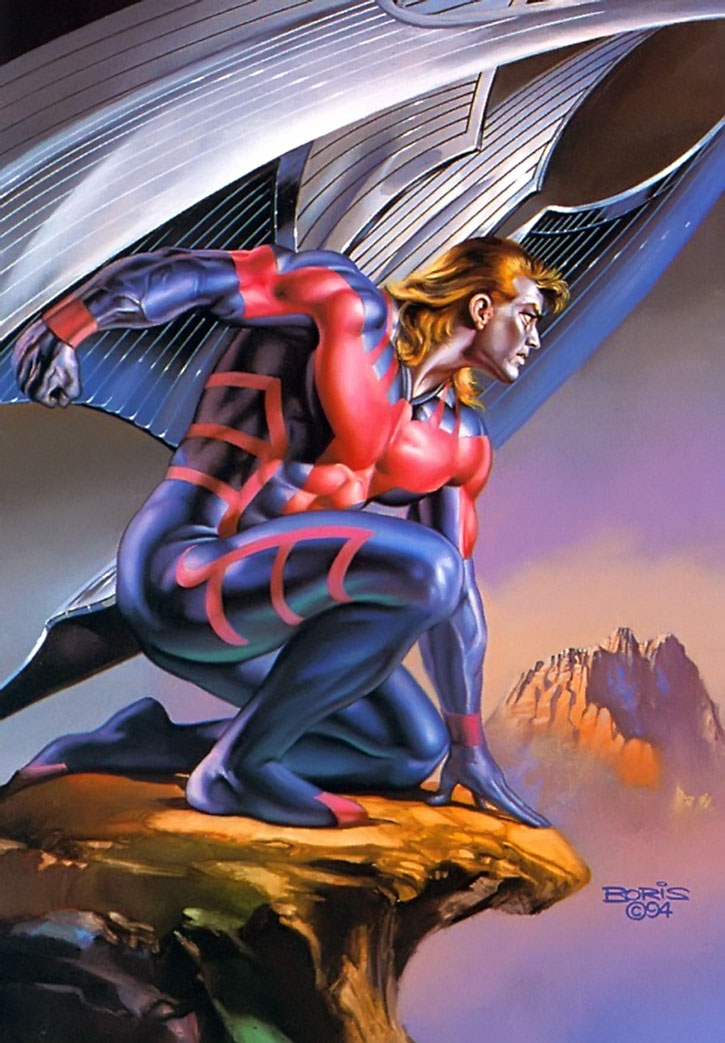 Archangel is somber, harsh and brooding, and is unable to come to terms with the monster he has become. In a fight, he’s surly and mean, and while he actively fights his bloodthirsty, independent wings, he’s been known to kill without any regrets.

Bonuses and Limitations:
Kinetic Absorption is Structural Damage Only.

This version is purposefully slanted toward Simonson’s (and to a lesser extend Claremont’s) original vision of the character as a warrior/death angel, instead of the tamer Archangel that was seen latter and eventually lost the metal wings.

If you want the less morbid, post-Claremont Archangel : one less AP of DEX and MIN, costume can be removed and thus becomes a gadget with /BODY/ 08, no Guilt, no MPI, no Minor Rage and the Wings only have a Minor Rage. 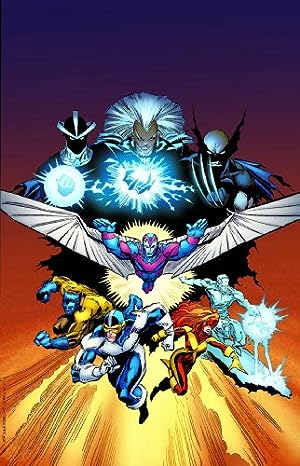 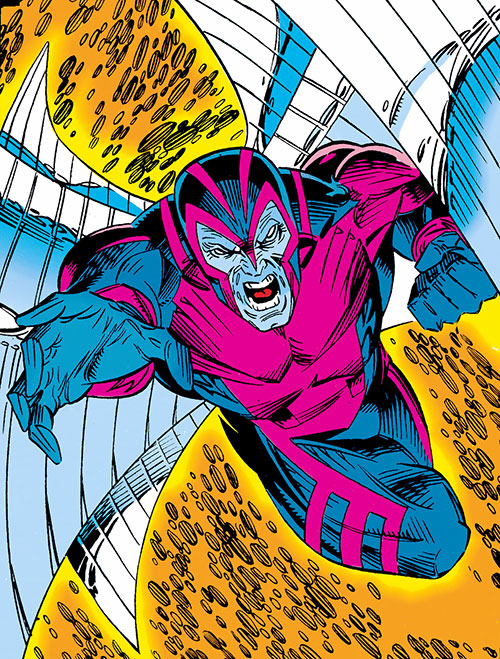 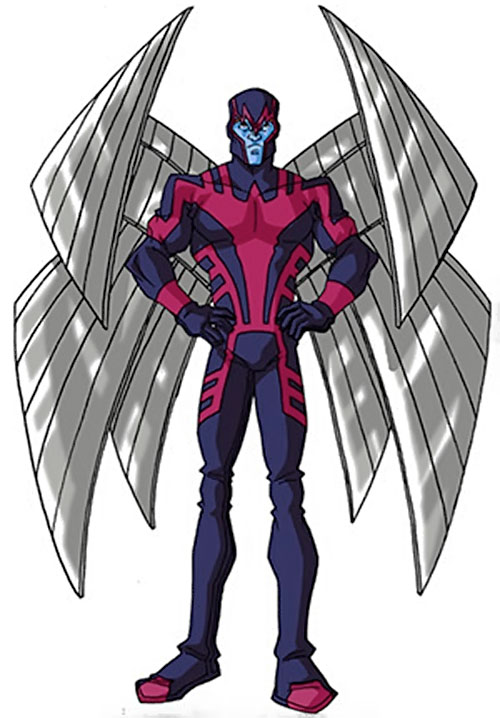 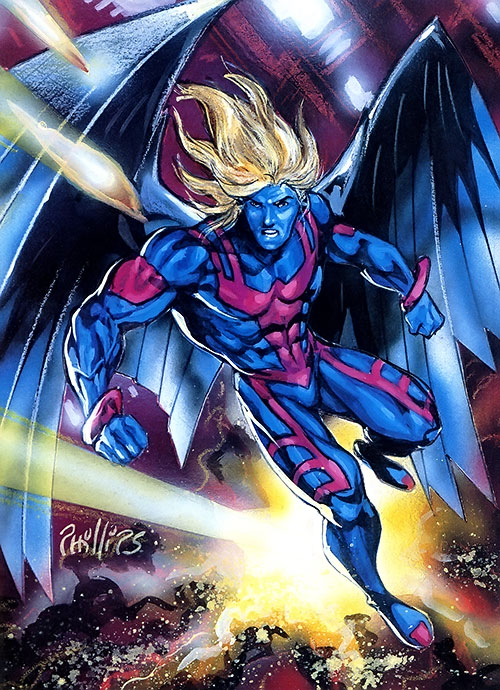