The main thrust behind this project is to prevent the build-up of superhuman militaries (and thus World War III) while still providing responses to superhuman crime and terror attacks.

It’s all Greek to them

Greek is one of the languages where super-hero names generally sound ridiculous – names in US comics are unstranslated in the Greek editions. Having her use a code name in English is the simplest solution.

In this approach, “Silver Bolt” could be her official code name, and the stupid nickname given to her in the lowbrow US press could be something like “the Greek Streak” or “Jeri Strap-it”.

The Αργυρή Αστραπή code name would only be used in official Greek documents, though it would have been used during her early career.

We have also changed her 1967 medal to something that was probably appropriate in Greece back then.

Argurous Astraph is a tall, strong woman with vast combat experience and training. She has superior charisma and leadership ability. As the commander of the UN’s superhuman forces she is a famous, influential person with extensive responsibilities.

She has the power to turn into a form of living chrome with :

Her core tactical approach is to hit ’em hard and fast. With over 20 years of experience in the military and as IST Commander, Dimitra has seen it all and then some. In combat she doesn’t mess around. Grandstanding is for fools and megalomaniacs, whereas a successful military op requires coordination and momentum.

She will also carefully inspect any battle plan for flaws. She will remove any part that exposes her teams to undue risk.

Since she was presumably at least 20 in 1967 — based on her biography — one assumes that her powers include slowed ageing, even in her flesh form. An interesting variant might be to have her be an older woman in her normal form, but not having aged a day in her chromed form.

Born to a poor Greek farming family, Dimitra first transformed into her metallic form as a teenager. When the town doctor confirmed she was a metahuman, the military came running. They recruited her, then ran her through extensive testing and training.

In 1967 Ms. Poulis personally defeated a coup attempt. She was rewarded with the Gold Cross of the Order of the Redeemer. At 25 she was one of the highest ranking metahuman officers in the Greek army, and she commanded the entire metahuman division at age 30.

Dimitra became part of the European Common Market superteam in 1981. When that team was disbanded in 1982, she resigned from the Greek military and enlisted with the UN’s International Super Teams program.

Made the supreme commander of all IST forces, she then moved to the New York City IST office and made herself at home.

Dimitra normally has black hair and eyes, while her chromed form gives her silver skin, hair, and eyes (though her hair is black on the GURPS IST cover).

Her costume is a legless and sleeveless body stocking with gloves to the mid-bicep and thigh-high boots.

Dimitra is always willing to be there for her friends – and she considers everyone her friend unless events prove otherwise.

However, she is also a stern commander, ruthless and efficient. She treats combat as all-out war, not holding back her punches, fighting dirty and unmoved by enemy casualties.

At the same time, she makes every effort to prevent harm to her personnel. She’ll rework plans until she is certain that the risk for the troops is the lowest possible.

She is detached and impersonal whilst on duty, but visits her family back in Greece every time she has a leave.

She’s always interested in recruiting new talent for the IST, and given her customary ruthlessness is willing to consider practically any source for hires, no matter what their origins, as long as they can be good and upstanding IST operatives.

She hates her American nickname, “the Silverbolt”.

“Nobody ever said we had to fight fair.”

v1 of this entry was sticking fairly close to the GURPS stats. Though it was using familiarity with both systems rather than any mathematical system to convert values.

However, the GURPS stats were written with character points economy in mind. In hindsight that resulted in DCH stats that were a little awkward. Since the author noted that the character would be different if she had been created in the Champions RPG, we streamlined her v1.1 DCH stats. Ms. Poulis is now more in-line with other WORG entries.

Even with this streamlining — which tended to round things up by one AP or so — she exists on a GURPS Supers scale. Which translates as a fairly low power level in the Marvel or DC Universe.

In the Marvel Universe she would probably be DEX 06 STR 09 BODY 12 in metal form with Lightning at 12 or so and two more APs to her movement powers and some Skills, and Hero Points at 60 or so.

In the DCU, use the Marvel-style stats but with a stronger Flight, and switch the Running to Superspeed.

Source of Character: GURPS IST Official Campaign Setting — this is based on her revised stats. 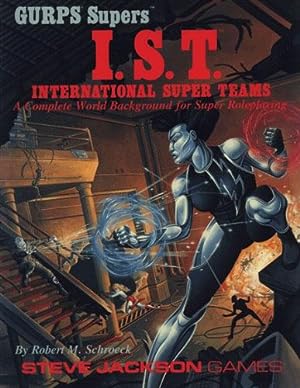 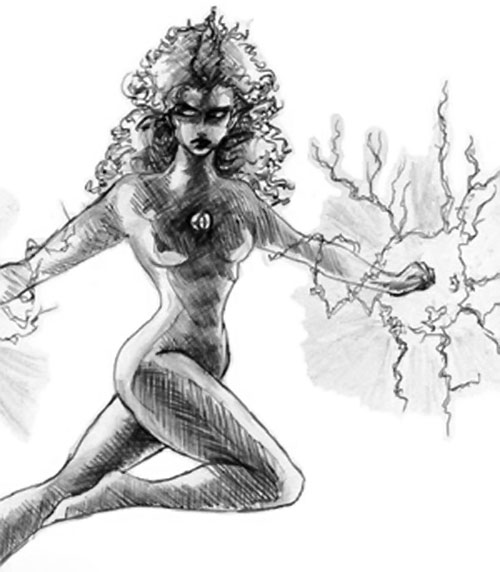