Argus is an obscure opponent of Batman & the Outsiders. He was only seen in one 1984 story.

So having notes for these guys sounds good to us.

Argus can see distant scenes as if he were standing there.

Our DCH game stats *assume* that he can also hear, smell, etc. the distant scene. 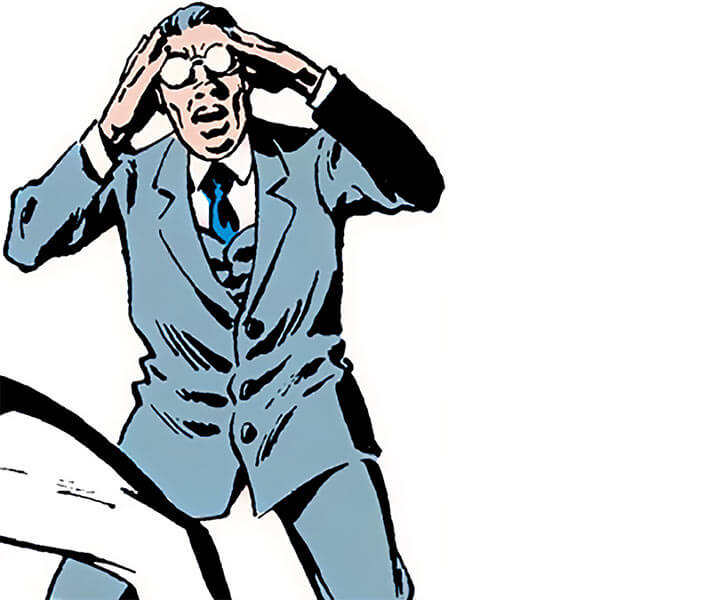 They were assembled by Maxie Zeus to assault the 1984 Olympic Games in L.A., with President Reagan  in attendance. Batman intervened and challenged the New Olympians to compete with his Outsiders in a variety of contests.

Argus’ sole role was to watch the matches and relay the results to Zeus and Batman.

In 2008 the New Olympians were all murdered by Gog (William Matthews), because Geoff Johns.

Argus was purely a plot device to relay the “matches” between the Olympians and the Outsiders. It’s lampshaded  through the story that he’s a non-entity, a non-character.

If you decide to use the New Olympians in further stories, and thus develop Argus, consider giving him more vision-based powers. Not something direct like laser eyes, but something that gives an unexpected edge to the team as a whole.

Example off the top of my head :

A middle-aged dork in a full grey suit, with thick glasses.

Shy nerdish sycophantPerson who acts deferential towards someone important in the hope of gains.

“I can see them in my mind ! Just as you said, Mister Zeus.”