Gloria has a frail appearance, but she’s indeed strong, agile and able to project lightning. She has been training her skills and powers to the point she is now able to:

Later, they ran some adventures. But the evil Master Mephisto and a strange Swedish millionaire Robert Sorenson also came after the painting. Mephisto banished our heroes into nothingness… in appearance. What he did was to send them to a far dimension so they were unable to bother him again.

The Patrol appeared in Cthulhu’s dimension . They got out of there as Big C rampaged that dimension’s Barcelona. Then they helped a strange man and his growing hamster to send the octopoid horror back to R’lyeh.

But the way back home began being manipulated. They kept jumping dimension from dimension, every time nearer to their own, but never arriving…

The manipulations came from a demon known as The Player, confined by Master Mephisto at DC’s Limbo. From there, the Player kept altering the dimensional jumps of the Patrol so they arrived in the Limbo, after crossing the Real World, where they appeared into their own players bodies, without powers and at the same moment we were playing.

After a momentary return to the DC Universe, but on the Ist century, to the AD&D world of our PBEM-campaign, were they fought and defeated Darkseid, lord of Dragons, to save the Justice League of Greyhawk.

From there they jumped into a negative world. There they found that the Master Mephisto they quickly defeat was, in that universe, one of the world greatest heroes… and their negative (not exact) counterparts showed to finish them so they would have open field to act !

That plane was were the Player finally appeared and transported them to the Limbo. However, they thought they were on the Dragon Ball’s universe, as one of them, Bombolla, had to enter the Martial Artist Contest, with a ring surrounded by lethal energy, to being able to go back home.

She fought and won young Songoku (after Tao Pai Pai) and later, at the final, Ripley 8 (from Alien: Resurrection – “hey, look ! Sigourney Weaver !”).

But all that was a tactic of the Player to obtain energy. All the Dragonball-esque surroundings were an Illusion to gain the power enough to escape the Limbo with a gang of old sorcerers now reduced to the skinny, yellow, non-powered “Speak People” (Pueblo Habla).

On this moment, the final battle, with the dimensional door already opened, is to begin.

Ariadna wears a white ninja-like kimono and soft kabuki makeup, so no one can recognize her.

In her civvies, Gloria wears glasses (that she doesn’t really need).

She’s quite an easy-going person, friendly with the rest of the team and trying that relations between the Patrulla Barna members don’t break. She’s a bold girl.

“I’m having problems determining who I am.”

The Patrulla Barna fits perfectly on DCU’s Barcelona, as the game happens at the DCU and all major events (Superman’s Death, Invasion , Armageddon 2001 …) do take place. The campaign did take in the place, though – in 1992.

Bonuses and Limitations:
Power Reserve is Fatiguing and has Serious Power Burnout (-2, -2). As long as the player won’t widen the range of powered scores or the power reserve or any powered score arrives to 10, by powering an attribute, the linked powers and skills also grow (SPECIAL). 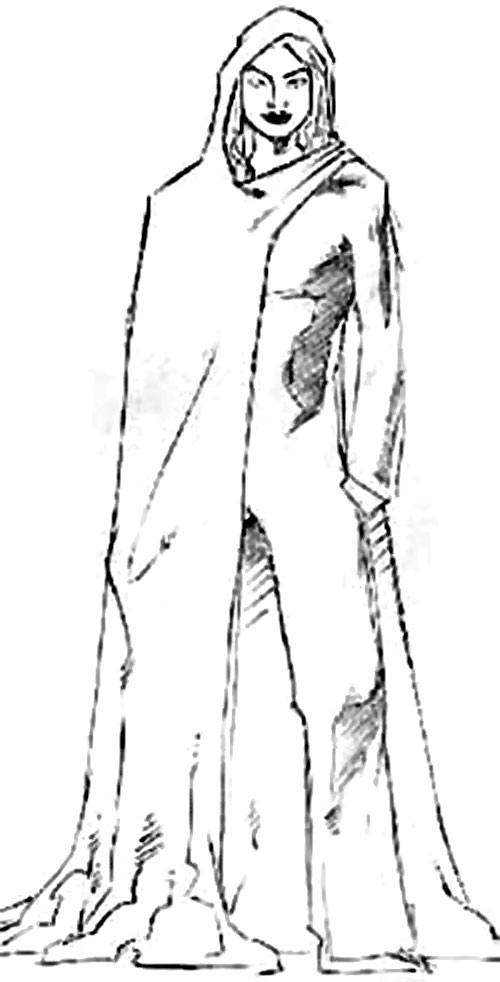