Arrowette is an extremely proficient archer, routinely firing two, or even three arrows at a time at the same target.

She is also a proficient gymnast, and appears to be skilled at hand to hand combat, as well as possessing intrusion skills.

Arrowette has been trained from a very young age to be a costumed archer heroine. Her mother, an archery medallist, was the first Arrowette. She now appears to live vicariously through her daughter.

Eventually, her mother pushed Cissie into battle with the Spazz in Manchester, Alabama (home of Impulse and Max Mercury, who intervened in the fight). As a result she was removed from her mother’s custody and made a ward of the state. She now studies at the Elias School, under the care of Dr. Marcy Money.

Quite recently, Cissie returned to her hero identity. The occurred after an unfortunate remark by Money made her want to prove she was a better archer than her mother. She has joined Young Justice, where she has performed well on several missions with the team.

She probably gets cold. She wears thigh high red boots and gymnast style briefs, covered with a short white miniskirt. Her top is a red leather looking tank/halter top affair that leaves her mid riff bare.

She has long gloves, that almost reach her elbow. She also wears a mask that leaves the bottom half of her face uncovered, as well as leaving her long blonde hair free. Still, the present outfit is a vast improvement over her old outfit.

Her arrows are kept in a large quiver on her back, and her bow can be broken down and stored there as well.

A young, good-hearted hellion basically. She is very loyal to the other members of Young Justice, even going so far as to tell off the Justice League in defense of the boys. She is rebellious, and resents her mother (who wouldn’t, if in her shoes ?).

She is quite determined. Cissie also is the most flirty of the young women in Young Justice.

“If I can’t hit it in one shot, you’d better promise not to tell my mom.”

By Richard Lyon and Sébastien Andrivet.

Helper(s): Revenant, Mike Semchuck, and a host of others on the age issue. 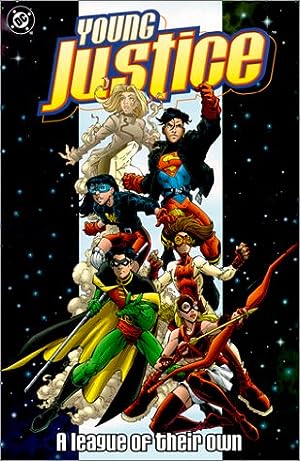 Young Justice: A League of Their Own.