Arsenal is a competent storm trooper and mercenary. He wield a strong personality and an advanced arsenal.

Arsenal III has no apparent link to Nimrod Strange (aka Arsenal II, deceased) – also an obscure Moon Knight foe. Or, for that matter, the Arsenal robot.

He encountered Moon knight when Roald Bushman started planting drug crops in Burunda to develop his nation. Arsenal defeated Moon Knight by hitting him from ambush with curare-tipped needles.

He then pretended to be a mercenary hired by the DEA to press Moon Knight into their service. He stated that the both of them, plus a cadre of international mercenaries, would hit Burunda and destroy the crops. In return, he promised a free pass from the IRS.

As the mission was under preparation in Marseille, Spector phoned Frenchie. An investigation broke the man’s cover. Arsenal was actually working for a drug cartel whose envoys to Burunda has been slaughtered by Bushman. They had then decided he would grow drugs there on their own.

Spector took out Arsenal and the other mercs and left them for the French police to find. But Arsenal III managed a spectacular escape.

Running on pure anger, Arsenal fled to Africa. Within days he rode a chopper-style motorbike into Burunda, blowing up the frontier outpost with a rocket launcher.

Nobody I know voted for Bushman

Burunda was then in chaos after the rebels, led by Moon Knight, destroyed the poppy fields. However, the insurgents were being hit hard in retaliation by Bushman’s air force.

Nevertheless, Arsenal joined the second half of the rebel forces. These had come close to the capital while Bushman was away hunting for Moon Knight. He took command and attacked. Meanwhile, Moon Knight defeated and deposed Bushman.

The capital soon fell. Arsenal, after amusing himself with promises to various insurgents, called his the drug cartel in order to organize Burunda’s future. Arsenal’s fate from then on is unknown.

Confident tough guy and mercenary with guns and a stubborn, aggressive streak a mile wide.

Arsenal III’s resolve and bad temper are impressive. Once frustrated, he will go to remarkable lengths to even the score and leave very little stand between him and his goal.

Recruiting Moon Knight was his idea, so he does have a level of initiative significantly above the average thug’s.

“I’m not crazy. I have a low frustration level. That’s what my shrink tells me.”

Helper(s): Roy Cowan reminded me of Arsenal I’s existence. How could I forget ? 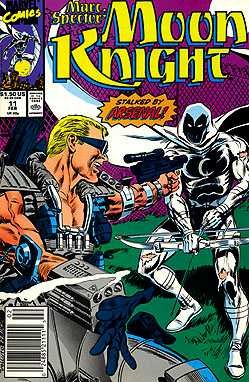 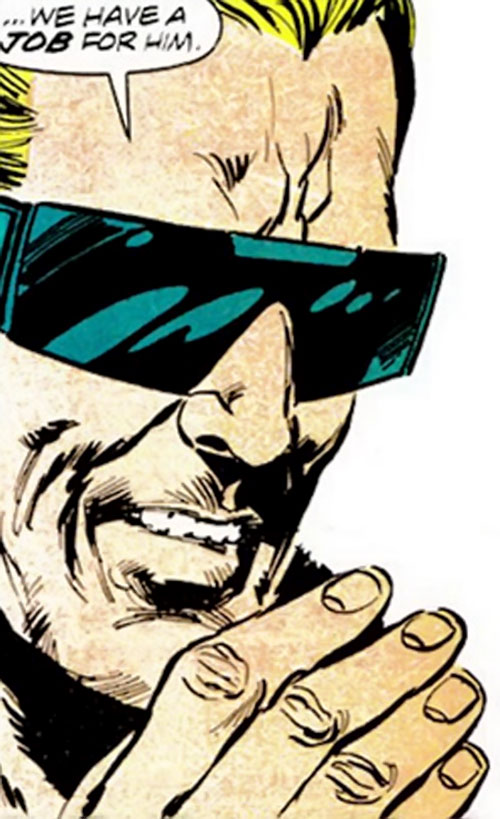