Artemis is a villainous archery expert with trick crossbow bolts. She appeared in 1987 as an Infinity, Inc. enemy.

This profile covers her early career, before she became the latest Tigress.

Her equivalent on another Earth — also named Artemis Crock and going by Artemis — featured in the popular Young Justice animated series of the 2010s.

We suggest that you read the following profiles in order to see the interesting Tigress/Huntress legacy in the DC Universe majestically unfold :

Artemis is a superior athlete, fighter and archer.

In combat Artemis is primarily a markswoman. Her signature weapon is her crossbow, and she carries a number of trick bolts for it. See the game stats for a list of bolts.

She’s something of a glass canonA character who is much better at offence than at defence. While she’s good at hitting things, a few good punches by a strong fighter can knock her out.

And though she’s already an excellent shot, she’s clearly not as dangerous as she will later become.

Though she’s trained to represent the heritage of both her parents, Artemis is much closer to the style of her mother. Her skills are suspiciously similar to those of Paula Brooks at the same age.

Our game stats only include skills and equipment Artemis demonstrated during her appearances. However she may already have had other skills she demonstrated later, as Tigress.

In one scene she’s portrayed as using a bow, but that seems to be a continuity mistake.

During both clashes with Infinity, Inc. Artemis made a point to shoot Jade in the hand by surprise. She used an all-wood bolt that would penetrate her defences. This tactic largely neutralised one of the most powerful Infinitors in one shot, and Artemis likes hurting Jade. 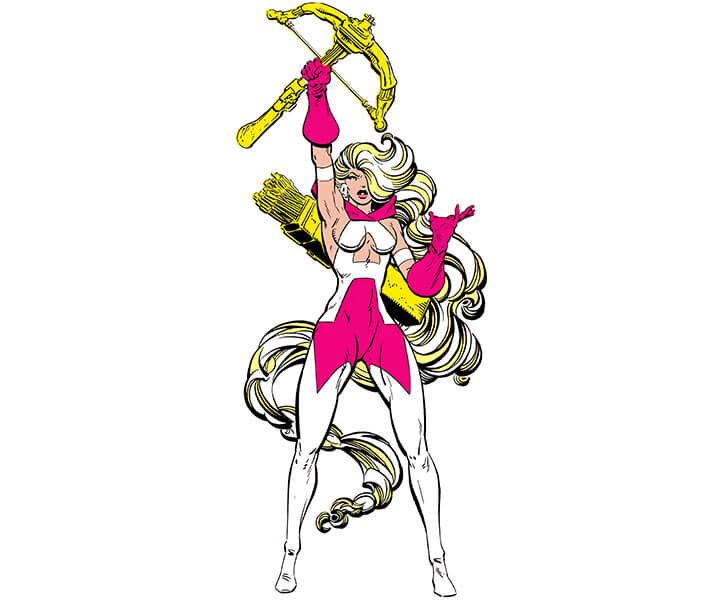 Artemis Crock is thought to be the descendant of two ruthless adventuresses :

This is just on her mother’s side. Her father is the Sportsmaster, another 1940s villain who fought Green Lantern (Alan Scott).

Using a mishmash of pre-Crisis publication dates and our standard assumptions about comic book ageing, we’ll suggest that Artemis was born in 1970. One gets the impression that her parents took a break from villainy to care for her until she could go to school, since neither was involved in a chronicled story until 1975.

From bits of dialogue and Artemis’ name and skills, it seems that Paula Brooks vicariously relived her youth — when she trained to became a great huntress like her idol Paul Kirk — through her daughter.

As the super-villain Artemis, Artemis Crock joined a new version of the Injustice Society while she was a teenager. Her parents were imprisoned in New York at that point. A key part of Artemis’ agenda was to get them out of prison so they could retire in Zandia.

Like most previous versions of the Injustice Society (including the one that counted her parents as members) the group was formed and led by the Wizard. It was a mixture of long-lived villains who had been active during the Golden Age (the Wizard himself, Fiddler and Shade) and of descendants of their teammates (Artemis, the new Icicle, and Hazard).

The previous versions of the Injustice Society had clashed with the Justice Society. Since the JSAers seemed headed toward retirement and a new generation of legacy heroes was emerging — Infinity, Incorporated — the Wizard named his group Injustice, Unlimited to keep up with the times. 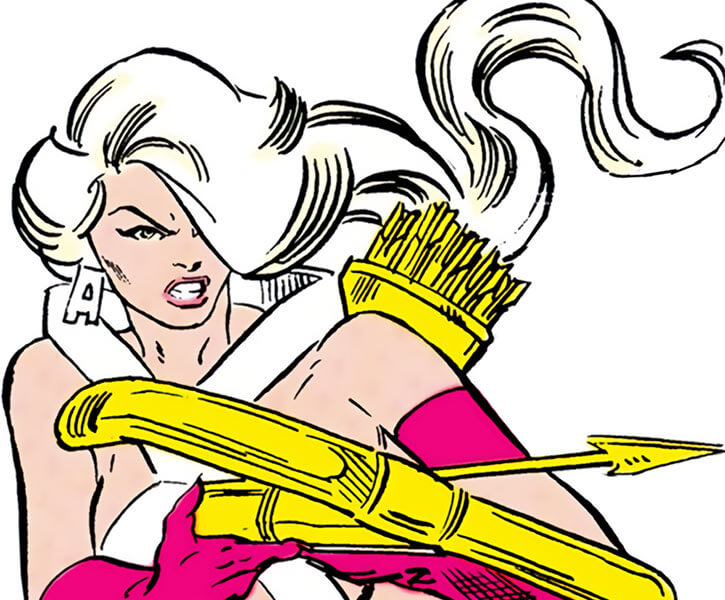 Injustice, Unlimited attacked a major trade conference in Calgary. There they clashed with both Infinity, Inc. and the Global Guardians.

The villains gained the upper hand. While the Wizard was holding the participants hostage for ransom, the rest of the roster forced heroes to help them on personal pursuits.

Artemis had Nuklon and Rising Sun assist in storming the Empire State penitentiary. They freed her parents on the day before their re-trial.

Though the scheme in Calgary failed when Solomon Grundy allied with Infinity, Inc., Artemis and her parents got away.

At this point Infinity, Inc. was falling apart in the wake of Skyman’s death. The Injustice, Unltd. members intended to finish them off. Artemis ambushed and nearly killed the Infinitor, Jade.

Jade’s lover Brainwave intervened. He would have taken out Artemis had not her colleague Icicle, who was developing a romantic interest in Artemis, been watching the scene.

Artemis and Icicle thought that they had killed the two Infinitors, but their targets narrowly survived.

Infinity, Inc. and allies managed to take out their opponents, but that was their last hurrah.

Artemis wasn’t seen for years after that. When she appeared again — in 2000 — she was considerably more experienced. And was now using the code name borne by her grandmother and her mother before her – Tigress.

Artemis is an angry, callous, cocky teenager who hates super-heroes. She’s here to kill heroes and get a lot of money.

One gets the impression that a key part of her motivation is anger over the time her parents spent in prison.

She prefers killing heroes but doesn’t mind killing anybody else. Though she’s disciplined she’s clearly on the bloodthirsty side. 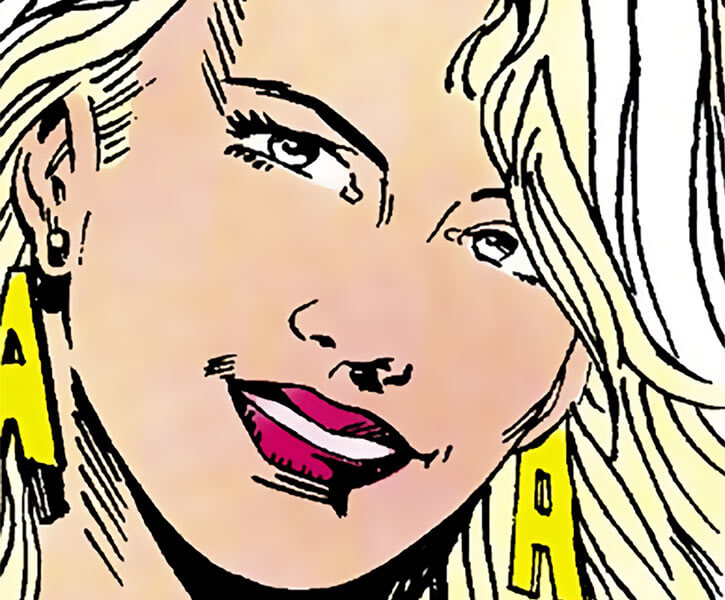 “No problem, mother. But if it’d been me, I’d have wasted those two do-gooders.”

(After shooting a bolt through Jade’s hand) “Aww ! Widdle gween girl hurt her hand on mean old arrow ? Want Artemis to kiss it and make it well ?”

“What a couple of chickens ! Where’d you think we were headed — Coney Island ? Now, you two just do what I tell you, and *maybe* no guards’ll get hurt.”

(Brainwave rushes in to see if his lover Jade, whom Artemis shot several times, is still alive)
Artemis (taking aim): “Well, well, wadda you know. Two for the price of one !” 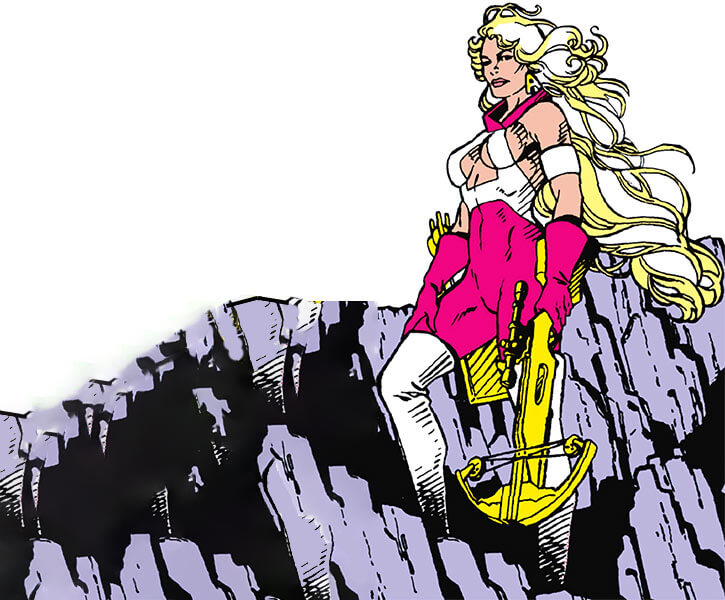 Almost certain has an Expertise in Hunting, but that’s not demonstrated.

Almost certainly has 6+ Ranks in Expertise (hunting), but that’s not demonstrated.