This odd Marvel Comics mercenary was seen but once, in a 1978 The Defenders issue guest-starring Ms. Marvel.

Shaman appears to be a trained agent, but probably not a full AIM agent (which would imply a higher education in science and/or technology).

His main asset is his power of mesmerism. His supernaturally intense eyes burn to the very soul. This can force ordinary people to follow his commands.

Though he’s very confident, Arthur Shaman has a very low Hero Points  reserve. His hypnotic power means that he almost never encounters significant opposition, and he has little idea about how to handle such situations.

Arthur Shaman might be a mutant. But this sort of mystical-ish ability combined with an ominous name usually indicates a minor paranormal background.

Arthur Shaman is a mercenary who worked for A.I.M. in the late 1970s. Though his arrogance annoyed his employers, he was ideally suited for minor missions of capture and manipulation. Therefore, tthey regularly hired him to conduct those.

When an A.I.M. base in New York City was uncovered by press editor Carol Danvers, an A.I.M. task force investigated the security failure. They retained Arthur Shaman, who decided that Danvers’ psychiatrist Dr. Barnett probably knew all about her. Shaman mesmerised Dr. Barnett and took him to an A.I.M. base for interrogation.

Barnett mentioned that Danvers had recurring nightmares of being attacked by the Hulk (Bruce Banner). Shaman thus suggested to capture the Hulk and send him after the journalist (???). A.I.M. sent the powerful Warbot to attack the Defenders, capturing their member the Hulk despite their efforts.

However, Ms. Marvel had a premonition about the attack. Along with two Defenders who had not been captured (Nighthawk and Hellcat) she stormed the A.I.M. base. The overconfident Arthur Shaman was easily trounced by Hellcat.

“Excellent, my dear ! Now we know what name to inscribe on your tombstone !”

“Can’t you handle him, agent ? Or must I do everything myself ?”

Arthur Shaman could easily have further abilities – this writeup sticks with what is very likely (the Vehicles Skill and Arrogant Drawback) or demonstrated (everything else). 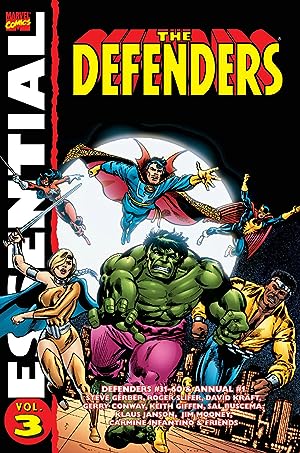 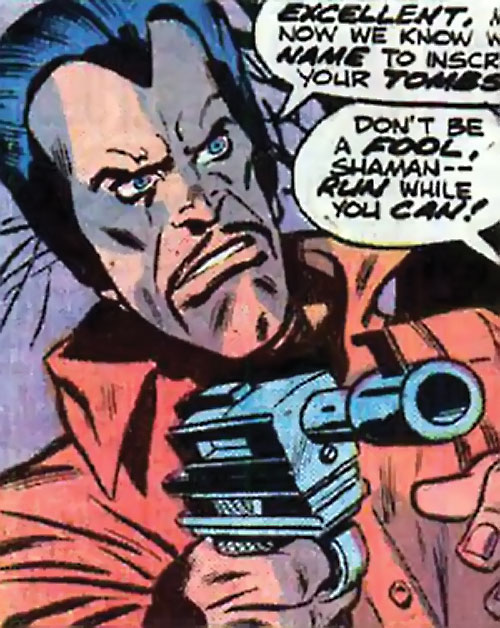