Nitobe-san was a legend among martial arts enthusiasts in the 1970s, as the Last Living Grand Master of Ninjutsu. He is the man who trained Manhunter (Paul Kirk), and could reliably defeat him in a martial arts duel.

The art he’s a master of is the mythical 1970s version of ninjutsu. As such it is the most mysterious, ultimate martial art, built by long study of all other styles and melding all their strengths in one deadly style.

There’s a little grain of truth to this. For instance the modern Togakure ryu  of ninjutsu comprises techniques from what were originally separate, specialised styles taught across Japan. But generally this just means that Nitobe-san masters badass comic book moves.

Asano Nitobe is an intelligent and knowledgeable man, and a master of tactics.

Back in the 1970s, Nitobe-san was the martial arts equivalent of an urban legend. He was the last living master of ninjutsu, the last inheritor of lost ninja secrets, reportedly killed in 1945 by the atomic blast that ravaged Nagasaki.

It is *possible* that Sensei Nitobe and the World War Two OSS agent “Kana the Shadow Warrior” were the same man. Kana’s stated background was odd and likely a cover, and both men had very similar skills. But these are about the only two facts to support that No-Prize Hypothesis .

Nitobe came to work for the Japanese genius Doctor Oka, who helped him leave Japan in 1945. Oka was involved with the Council, a worldwide conspiracy of self-described geniuses. After the atomic fires, the Council wanted to take control of Earth to prevent humanity’s annihilation.

Although it meant well, the Council degenerated into a nefarious, self-serving conspiracy. By the 1970s, it was clearly a threat. Dr. Oka’s — Nitobe-san’s lord — doubts about the Council grew. As a result, the other nine heads had him murdered.

A key achievement from Dr. Oka was human cloning of extraordinary efficiency. Oka had been growing an army of super-killers based on Paul Kirk, aka Manhunter. Part of Asano Nitobe’s work was to train Kirk and his clones in ninjutsu.

Nitobe and Kirk got along well. They came to respect each other both as instructor and student and as friends. Thus, as a precaution, the Council brainwashed the sensei so he could not trust Kirk. 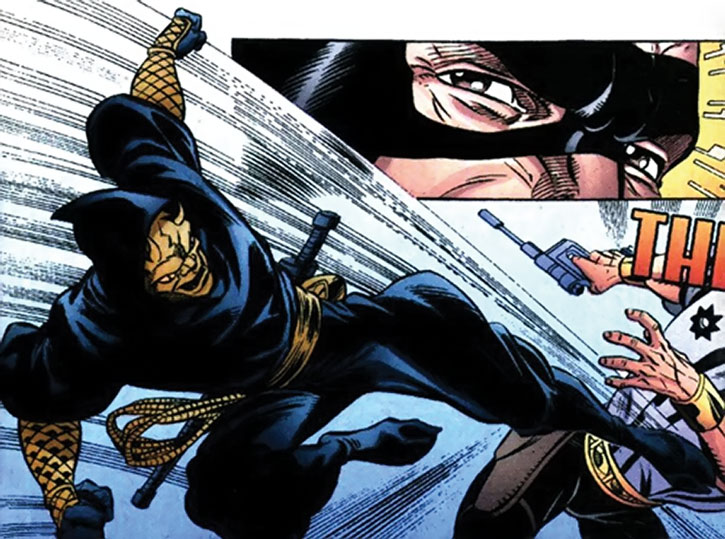 This safeguard was justified – Kirk did go rogue and started taking the Council apart to end its threat. He eventually ran into his teacher, and the conditioning made Nitobe-san’s unable to believe Manhunter’s words.

However an ally of Manhunter, Interpol agent Christine Saint Clair, played a tape of Council members explaining how they had ordered Dr. Oka killed. This allowed Asano to break the brainwashing. The Japanese master allied with Manhunter.

Nitobe-san, Saint Clair, Batman and other Manhunter allies helped Kirk launch a last raid on the Council’s headquarters. Nitobe was instrumental in engaging and disrupting the Council’s security. He was shot in the fray, but not seriously wounded. Manhunter seemingly sacrificed himself to destroy the Council, thus avenging Doctor Oka.

Tears of a clone

But another matter of honour remained to be settled. A significant number of clones of Kirk had escaped, and Nitobe and Saint Clair saw those as an insult to their dead friend. The pair started hunting down and killing these clones. 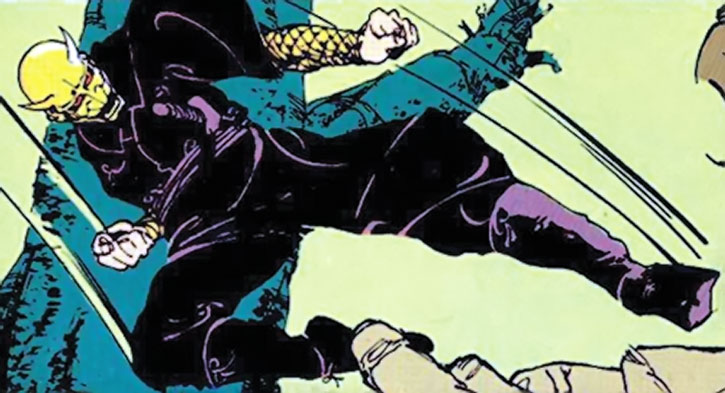 Apparently, they did so over several decades, pairing up whenever new intelligence about a clone emerged. One of the elimination missions was done in Gotham with Batman’s support.

One of the last clones — possibly the last- – popped up as a member of the Power Company. He even used the name Manhunter and calling himself Kirk Depaul. Asano and Christine engaged him and defeated him as per standard procedure. However, he more or less convinced them that he was a good guy trying to honour Kirk’s memory as he could.

Uncertain that a kill was ethically justifiable, they let him go.

He prefers hand-to-hand combat, especially against Kirk clones, as he feels a duty to use the skills he taught them to kill them. St. Clair will generally be on far overwatch with a sniper rifle in case of a problem.

“Concentrate ! Turn your mind from the pain as you were taught !”

Drawbacks:
CIA toward the bushido.

This Schtick is quite possibly unique to Sensei Nitobe. When fighting an opponent chiefly trained in Ninjutsu, it allows Nitobe to reduce his opponent’s OV by one CS, while increasing his own OV by CS in respect to opponents fitting the ninjutsu criteria.

Opponents mastering other styles may opt to switch to those (an Automatic Action) to deny Sensei Nitobe this bonus, if they realise what is going on.

This bonus always applies against Paul Kirk and the Paul Kirk clones, since he trained them all.

At the GM’s discretion, extremely obscure ninjutsu styles might be exempt from this.

Against ninja Nitobe’s melee offensive bonus and parry go up by 4, and his Averaged PL thus rises to 10.4. 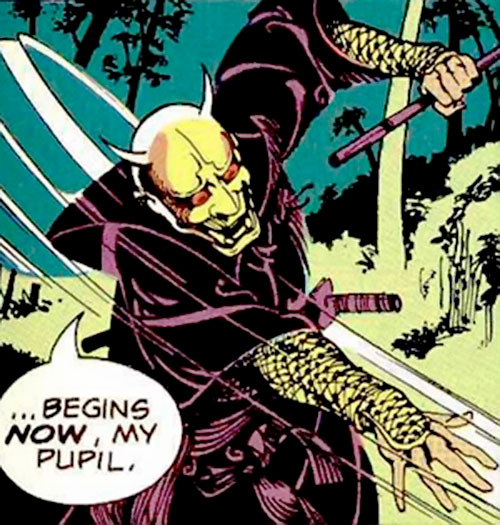 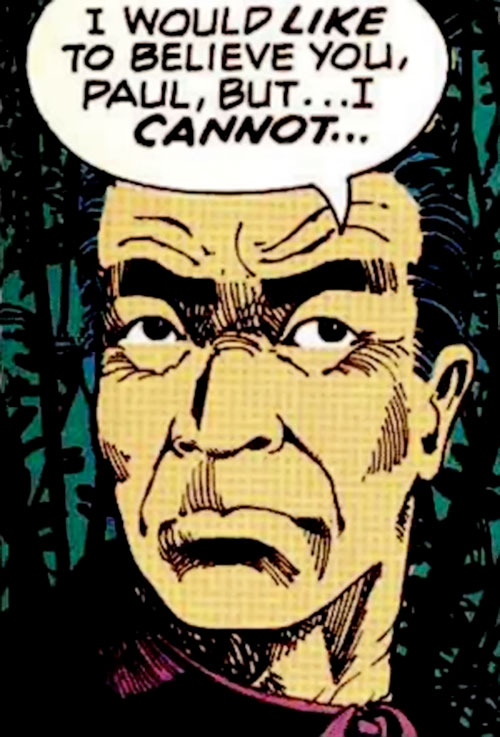 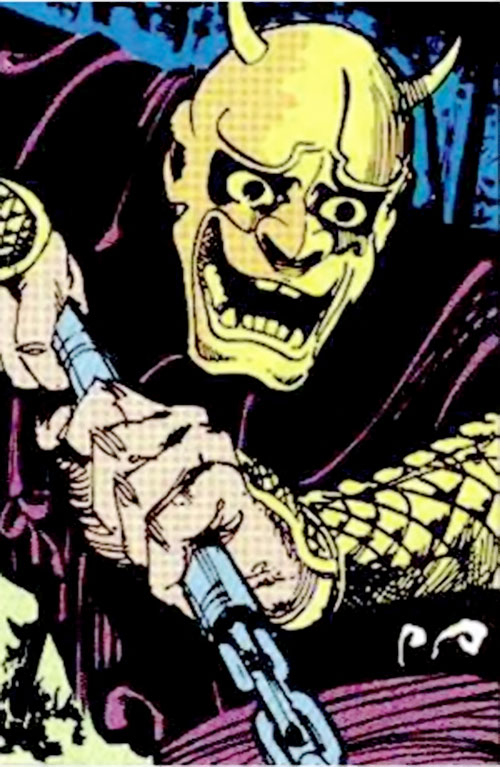 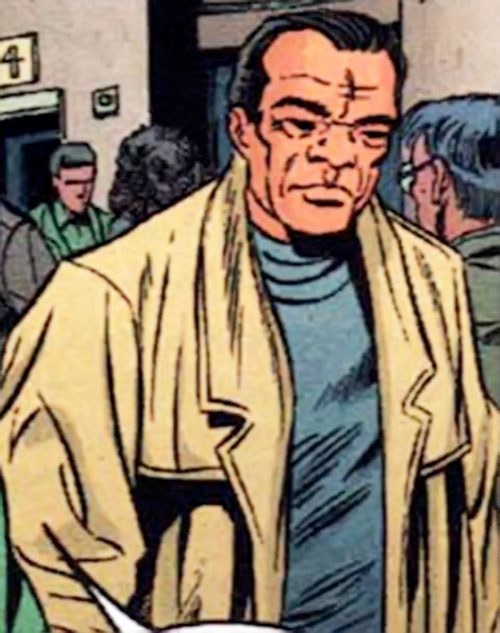