Ashe is a hardened, competent mercenary with 20 years of experience. He also was a NCO in the US military. He tends to approach situations in a military manner.

In particular, he will deploy automatic weaponry. If feasible and he expects problems, he will go in with a big, old-fashioned .308 assault rifle.

Like Sergeant Rock, Jacob Ashe has a “combat antenna”. If he realises that he’s in danger, he can intuit when someone is aiming at him. This can work even against snipers.

Ashe fights like a professional, and seems to have gotten training in the martial arts. He does not use fancy moves, but obviously knows his way around pain holds, finger and wrist locks and the like. Perhaps he was taught some aikijutsu with a strong self-defence slant.

In close combat, Ashe’s most common tactic is to break the wrist of the most dangerous-looking guy. He’ll then keep him in a pain hold and tell the others to bugger off.

Jacob Ashe seems to be independently well-off. He likely invested his foreign earnings. He owns a townhouse in the Big Easy and can meet the common expenses.

How Cinder and Ashe earn their income is unclear – Cinder has stated they never charge the victims and take their cut off the victimisers.

Ashe has significant investigative experience, and is good at legwork and crisis management. Overall, Cinder & Ashe seem to be about as competent at their job as top-tier police detectives. But they do not quite employ the same means or rely on the same experiences.

Doug Kershaw’s Lousiana Man is one of the big Cajun classics of the second half of the XXth century. And — I’m told — something of a cultural touchstone. The way of playing the fiddle is immediately evocative of White Francophone Northern American folk musics.

Jacob Ashe was born in the bayou around 1948 – in Lafayette Parish , on the Vermilion river. His father, Cabot Ashe, was an USMC sergeant who died in Korea in 1950. His widow remarried with a local named Peter Dubois, who adopted Jacob and raised him like his son.

Though he dearly loved Peter, Jacob knew his destiny was to walk in the footsteps of his other father. In 1967, he enlisted in the Marines.

After basic, Ashe was shipped to Việt Nam. His combat experience started in Saigon, with the famous Tết offensive of 1968. This is where he caught a first glimpse of Cinder, then aged five. The image of the bloodied little girl watching her dead mother silently and expressionlessly imprinted itself on Ashe’s brain.

Ashe narrowly survived his year in Việt Nam. On one occasion, there were but three survivors among their patrol after it got into an ambush.

In 1973 Ashe reenlisted, but in the Army and as a sergeant. He mostly served in West Germany, but went back to Việt Nam at the very end of that conflict. Ashe was at the Saigon embassy evacuation in 1975.

As everything fell apart Ashe, still haunted by his previous tour in ’Nam, suddenly decided he had to find the kid he had seen during the Tết of 1968. Nigh-miraculously, he did find her in the chaos.

When he caught with her in the street she was in a fight. A CIA agent named Lacey – was about to gun her down. Ashe reflexively headshot the American, grabbed the wounded Vietnamese teenager and told her they were going home.

When they got back to Louisiana, Ashe handed Cinder over to his cousin Jean-Marc and his wife Angélique. These close fiends adopted and raised Cinder. Ashe spent most of his team overseas, fighting in distant wars such as Angola  as a mercenary. He would usually spend six months to a year without seeing Cinder, Jean-Marc and Angélique.

In 1984, after her college graduation ceremony, Cinder approached Ashe during the big barbecue thrown by the Dubois for all their friends. They managed to better define their relationship, as a solid friendship with father/daughter overtones. 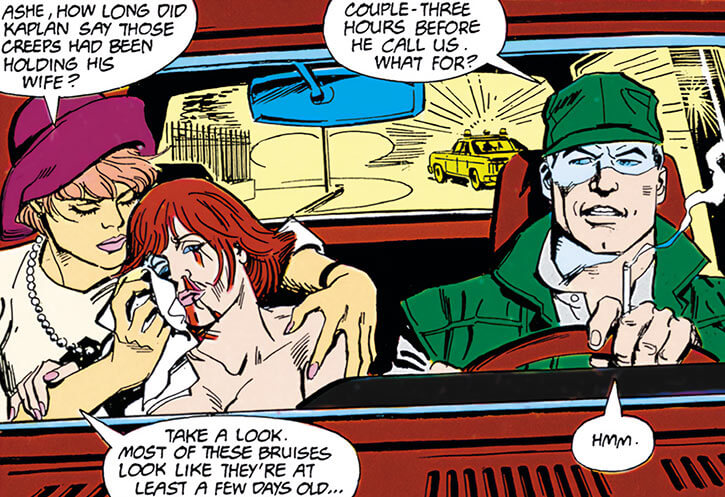 In 1986, Ashe decided he couldn’t be a soldier and merc anymore. It all blurred into a meaningless haze of pointless death and gratuitous suffering. For the first time in years he just stayed in the Big Easy without looking for a contract, spending time with Cinder.

The young woman suggested a partnership as “damage control specialists”, something roughly similar to working as PIs. Ashe decided to go with it, seeing it as a way to help more people (particularly youths) make a better life for themselves.

Cinder & Ashe have been involved in a number of cases, often rather serious (such as kidnappings, murders, political cases and the like), and have a very successful track record. 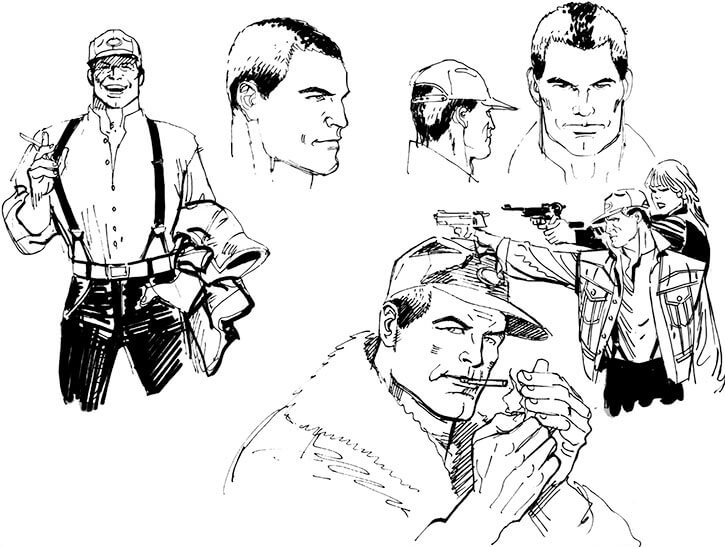 Though his hair is that of an older man, his face remains that of a man in his 30s, and he’s quite handsome. When he has to dress up, he does so dashingly – perhaps with Cinder’s advice.

Ashe comes across as a relaxed, friendly bayou man. He’s proud of his roots. He often has a faint smile and a frank gaze.

He does not speak English or French — he speaks Cajun. It’s mostly English with variant grammar (note the subject and/or pronoun generally ending at the end of the sentence and the double negations) mixed with old rural French (“je suis furioux, je n’y paux rien”).

When dealing with non-Francophones, Ashe will usually add, as an afterthought, what he just said in English if there was too much Cajun French in it.

Ashe is a chain smoker.

When there’s talking to be done he will let Cinder do most of it. She’s better at it and it allows him to smoke in peace. His unassuming, reserved and honest manner makes him popular with other rural and middle-aged types, though.

Ashe is calm and experienced, even in situations about to explode in violence and firefights. He’s been there, he’s done that, and he’s like a rock. He’s not unemotional – just collected. 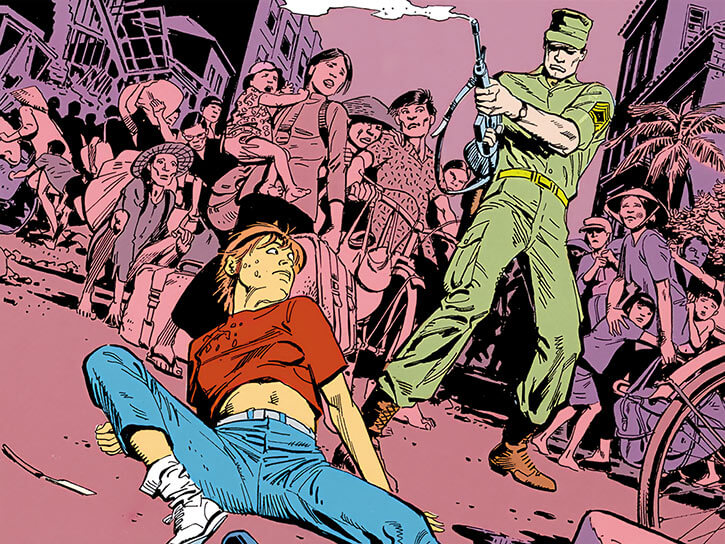 Dead and badly wounded children and teenagers make him angry and sad. Ashe considers he threw his youth away by fighting a war before he was 20. He thus prefers for people to enjoy their childhood and youth without being mangled by the world.

Ashe is never heard talking about his mercenary life. He’ll pretend he’s just a back country Cajun who likes fishing and BBQ.

He’s into country and Cajun music, such as Willie Nelson and of course Zydeco.

“Some people just don’t listen, they.”

“Mais non, chérie. After all these years you know I am the beer and pretzel kind of guy. Just the back country Cajun bastard, me.” 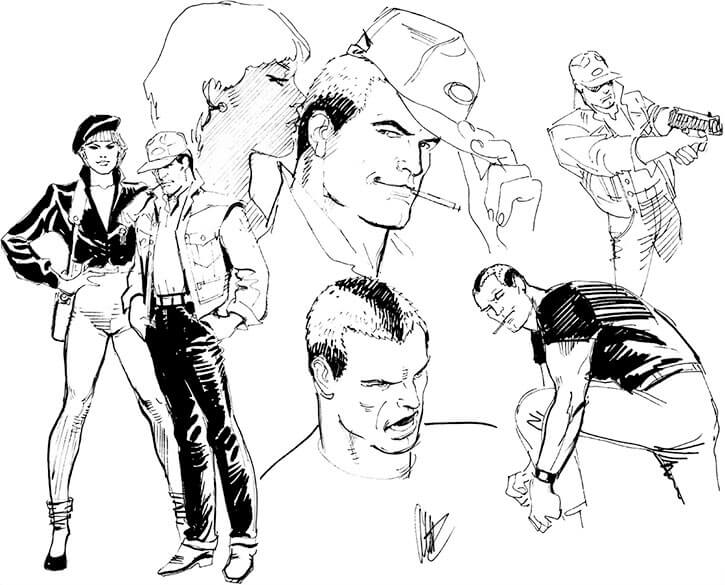 “M’sieu, we don’t got but two rates, corporate and individual.”

“A year since I saw her last ; for me another year of war. Where and why no longer matter. Je suis fatigué. But Cinder is strong, bright, alive. Looking at her I feel young. C’est vrai, she is the woman now.”

“Chère, sleep on the plane. We going be busy tonight, je s’imagine.”

Equipment:
Ashe always pack his Colt, plus another firearm if necessary. Guns he has used:

His main gun will usually be a micro-uzi (Machine Pistol) or a M14 (Assault Rifle), depending upon circumstances. 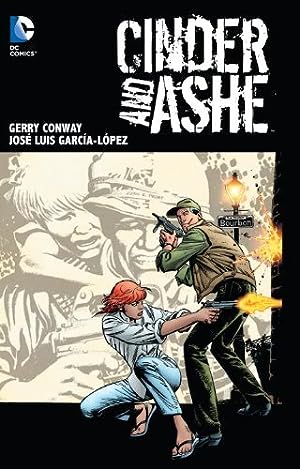 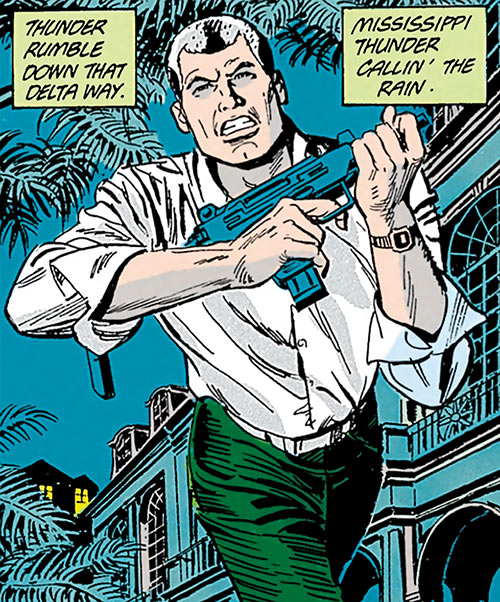 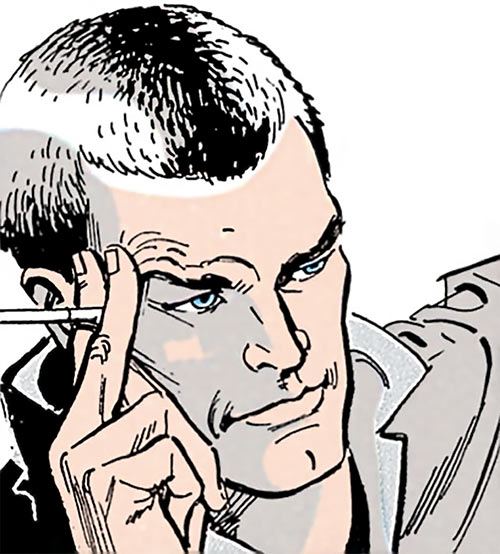 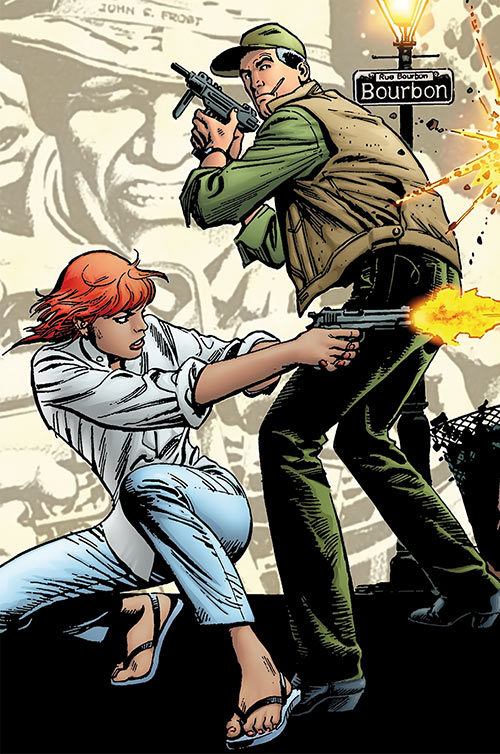 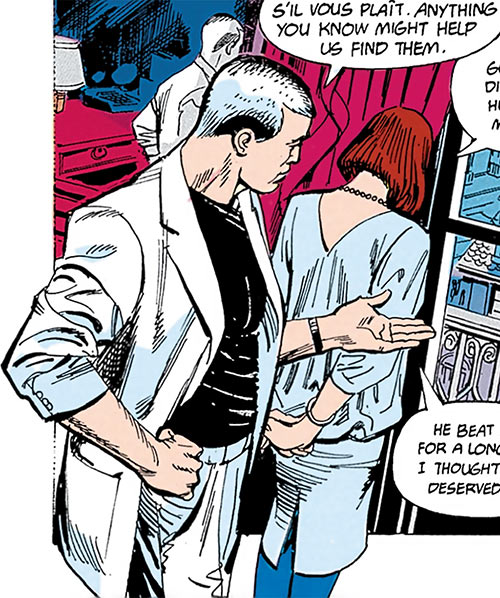 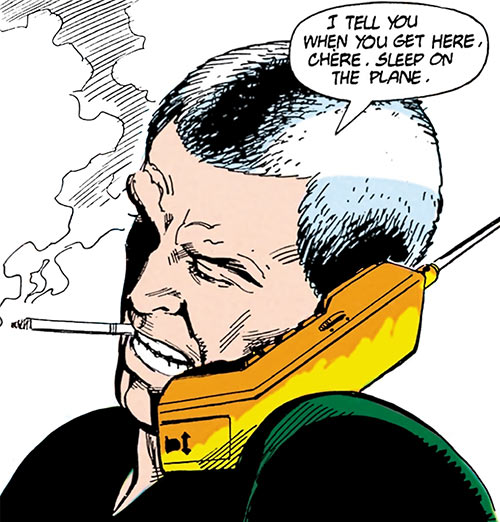 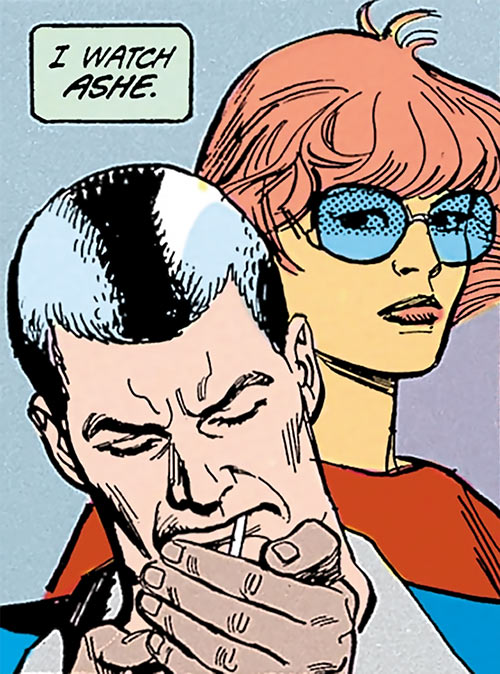 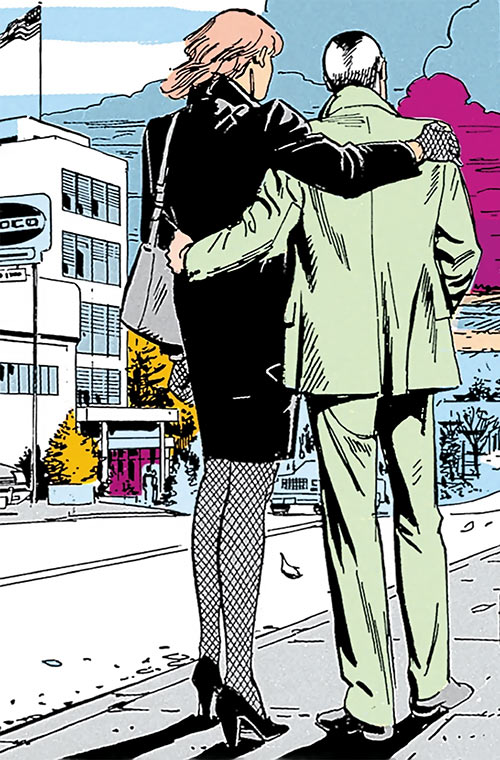 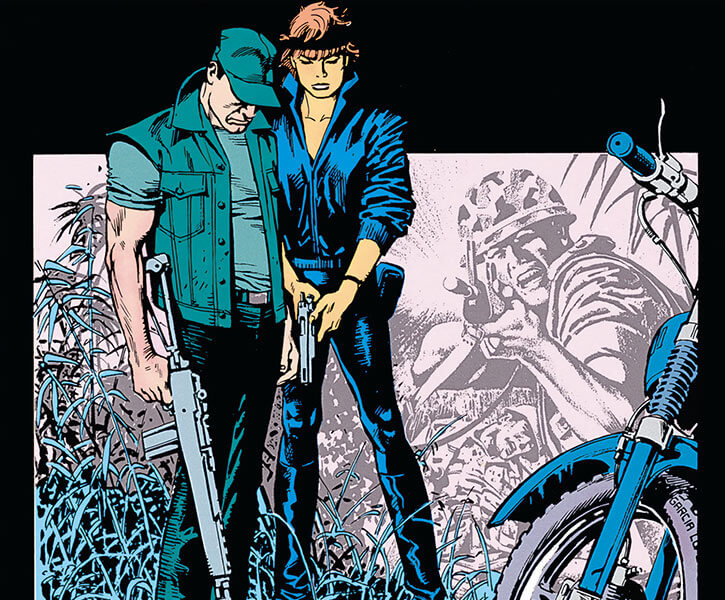