Asia has a wealth of experience with drugs, both legal and illegal. He can quickly whip up an antidote to the adverse effect of most substances.

Cu Ba Mynah was presumably born in Korea, although this is uncertain.

He spent some of his youth in the African city of Maristan. There, he was one of the few to survive an encounter with an unnamed malevolent entity which feeds on the worst parts of peoples’ personalities. The creature’s life cycle eventually devoured the entire city, even removing it from the memory of all but Asia and Slate, the only known survivors.

Getting involved in the drugs trade, Cu Ba Mynah ended up in Bête Noire. He assumed the name Asia Minor and became its main drugs supplier – both legal and illegal substances.

He also became supplier to the city’s overseer, the Magistrate, who required certain drugs. These were to prevent the effects of his position, which allowed him to know everything that went on in the city, from overwhelming him.

I want a new drug

When the Fallen Angel arrived in Bête Noire, Asia took an instant liking to her. He also wanted to get on her good side, so helped her out on her first case. She was unsuccessful in the quest, but nevertheless ended up owing Asia.

He called her in when he needed a shipment of heroin protected from a rival drug lord, Thomas Graymalkin. Angel guarded the warehouse, battling Graymalkin until they realised the crates contained copies of a trashy magazine called Heroine.

Angel confronted Asia as he stood on the docks, watching his shipment sail away. The ship then exploded, and Angel didn’t deny Asia’s accusation that she had caused it.

When the entity that had destroyed Maristan turned up in Bête Noire, Asia helped Angel find it. He gave her the same dosage of drugs that he’d had when he first encountered it, which had allowed him to see it. She managed to destroy it, removing the threat to Bête Noire.

One Tiffany later approached Fallen Angel to locate Asia. Angel agreed to see if Asia would confront her. At Asia’s mausoleum, Angel and Asia were surprised when the girl, who had managed to follow Angel, revealed that she was the ghost of an innocent victim of the drugs trade. 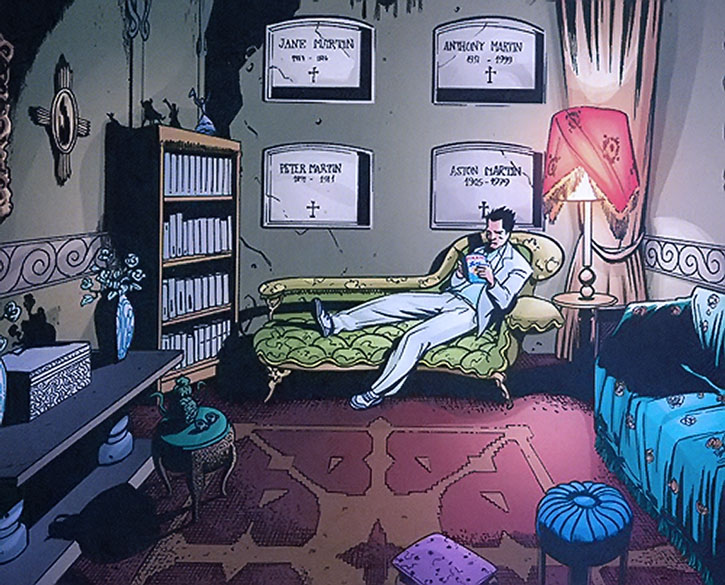 The ghost entered Asia, making him experience the distress his drugs had caused others over the years. Angel convinced her not to kill Asia, but the encounter left him changed.

Needing to travel abroad, Angel asked Asia for help in obtaining passage abroad. He arranged to get her aboard a ship sailing where she wanted to go, without telling her it belonged to a rival drug baron. She discovered this en route, and was forced to deal with them.

This is your brain

When Angel’s son Jude became the new Magistrate, his zeal to clean up Bête Noire put Asia in his sights. Especially after an old drug that he’d passed along caused a death, infecting Dolf’s employee, Ezil, as it did so. Angel asked Asia to create a cure for Ezil, and Asia agreed to do so as long as she helped him avoid the Magistrate’s charges.

When escape proved impossible, due to the city’s wishes, she tried to help defend him in the assembled court. But Asia goaded the obviously unstable Jude, unravelling under the pressure of his new abilities, into having a breakdown. This ended the proceedings.

In private, Asia explained that he had provided the drugs Jude’s father had needed, and the two came to an arrangement.

When the Hierarchy’s coup of Bête Noire took place, Asia was first drawn into protecting the fleeing Bumper, after she promised him a blow job. He was then drawn into helping Angel’s forces try to stop the coup, after Bumper offered a lot more.

He led his goons into the battle with the demonic forces, but the coup proved successful. Asia had to flee Bête Noire with the others, as it disappeared, destined to reform elsewhere.

Usually cheerful and smiling, Asia likes to play the part of a businessman. But if he takes a shine to someone, he often needs only the flimsiest excuse to help them.

He likes pretending to be an immigrant speaking broken English. But it’s just an act, and he can speak perfect English when he wants to. He usually does when discussing serious business, often displaying a surprising wit and evident education with those he feels comfortable around.

Asia is well aware of the importance of his role in Bête Noire (and, by extension, the world). Especially with the Magistrate being reliant upon him for medication. Thus, he knows he’s relatively secure in the city, and until recently had not left it in a long while.

He saw his customers as trash. Asia isolates himself from the effects of the drugs he sold by viewing it as their decision, and therefore absolving him of any responsibility over the consequences of his business.

This ended when Tiffany made him experience the effects his business had on innocent victims, those who got caught up in it through no fault or decision of their own.

He now feels more trapped in his life, knowing that Bête Noire won’t let him leave his role, or that if it does he could well die, bereft of the protection it has provided him from aging.

He’s been left unable to find the peace he used to in drugs, and has taken to carving symbols into his flesh, seemingly in an attempt to absolve himself of the guilt in some fashion.

His protestations of indifference to the victims of his trade also seem more forced than they would have once upon a time.

“Heh. You love startling old Asia, Angel-girl. You wild one. That’s why Asia likes you.”

Asia: “Look, Angel girl, you know ol‘ Asia respect you.”
Fallen Angel: “I thought you were afraid of me.”
Asia: “Same difference.”

[About the Glory drug] “Glory not sickness. Glory recreational. Only cure for recreation is not do.”

[Negotiating about protection] “There no cure yet. But I no slouch as chemist, Angel girl. Who’d you think med supplier for Bête Noire ? I got all drugs, good and bad. I whip up something help Ezil. But no can do if on trial for life, right ?”

“You no making sense to ol‘ Asia. Hey… you not on drugs, are you ? I hear people on drugs, they talk, no one know what hell they say.”

“First one free. First one always free. Second one bonus ’cause I feeling generous. After that, you pay. Payment is – you leave ol‘ Asia alone to do his business. Otherwise no pills… no quiet in your head… ever again. If that okay with you… the ol‘ Asia off to whip up cure for Ezil. Well ? What say you, Magistrate ?” (Magistrate tells him to get the fuck out) “Yessir. And out of respect… I not even laughing.”

“Nice, eh ? Quiet is… seductive. Peace seductive, too. Easy to give in. Believe it or no… ol‘ Asia knows what it like to be haunted. A girl came to me once. Her name Tiffany. Nice girl. Sad eyes. Dead. Ever since then… no peace for ol‘ Asia. That her gift. That my punishment. Can help others… but never self.”

Bonuses and Limitations:
Gadgetry and Scientist only relate to pharmacology and medicinal chemistry (-1).

Equipment:
Often armed with a handgun or submachinegun, depending on the kind of trouble he’s expecting, and surrounded by some of his thugs.

Prior to his encounter with Tiffany, he didn’t have Guilt.

One of three such cities around the world, Bête Noire is said to shape the world, event taking place in it echoing on a global scale. Seeming to possess some form of sentience, the city decides who may enter and leave it, and prevents those it still finds useful from dying or aging.

In game terms, its special citizens, such as Asia, have Slowed Aging and Invulnerability: 10, as long as the city wants them too, but may often be unable to leave Bête Noire unless it’s willing.

That he speaks Korean is assumed from his ethnicity, and has not actually been shown.

The Arabic is a guess, from him having spent time in the African city of Maristan, which is supposed to have been located in Northwest Africa, possibly Algeria, where Arabic would be the most used language, especially in a city. This, too, has not been seen in use.

Source of Character: Fallen Angel by Peter David, published by DC Comics and then IDW (covers up to #26 of the IDW series). 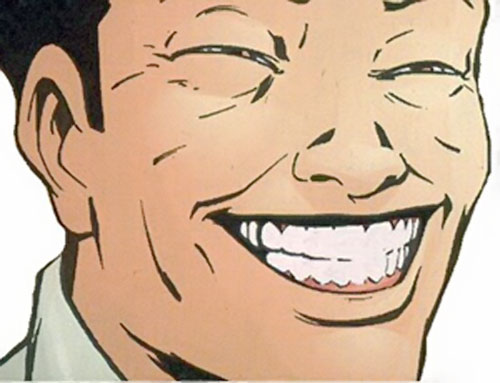 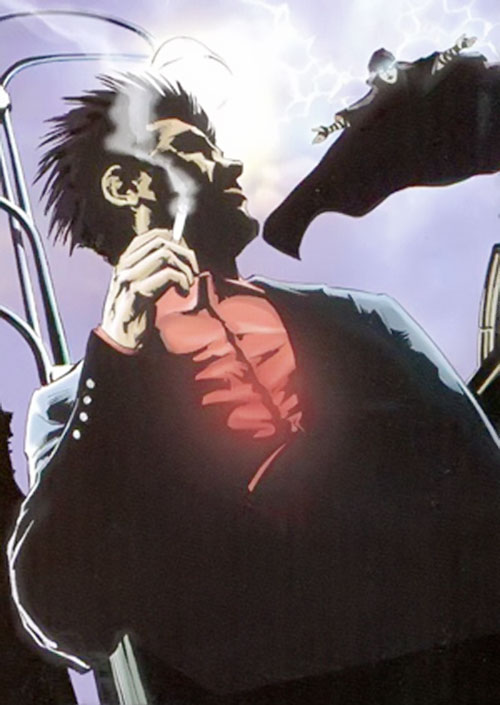