This is likely a weapon system designed for lighter suits of power armour , which has been adapted to their uniform to exploit their size and strength.

Assault and Battery are linked by an armoured cable. Since this is what immediately comes to mind in the Marvel Universe, I have assumed this technology was based upon the Synthecon alien technology used by Hammer and Anvil, tapping ambient kinetic energy to power the two giants with an even higher degree of strength and energy.

They are quite proficient at using the cable between them as a weapon – to snag opponents, bind them, strike them (which can be a pretty potent shock, since the cable burns with kinetic energy), etc. or to quickly move each other using their enhanced strength and habit of training with each other.

Assault and Battery tend to concentrate on a single, superhumanly strong opponent, using the chain to restrain the person between them then hammering the immobilised opponent. GMs can certainly come up with more spectacular teamwork if Assault and Battery get more screen time, though.

They prefer the chain over the machineguns, since the AV is higher and they like to brawl.

Very little is known about Assault and Battery, save that they seem to be twin brothers. They were part of a group of Roxxon-employed terrorists and mercenaries, led by Angar the Screamer, who briefly managed to take over the S.H.I.E.L.D.’s Helicarrier in a daring commando strike. 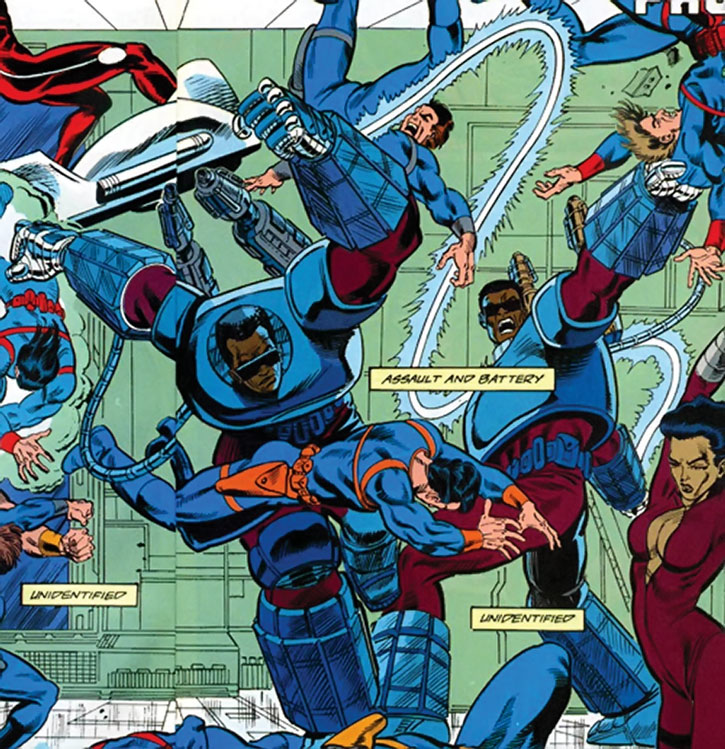 However, they soon were defeated by two senior S.H.I.E.L.D. officers (Nick Fury and G.W. Bridge) and three super-agents (Knockabout, Violence and Psi-Borg II).

Assault and Battery were defeated by S.H.I.E.L.D. Super-Agent Knockabout, who knocked Battery unconscious then managed to throw him into a shaft within the Helicarrier ; Assault, still chained to his brother, followed. Given their durability they likely survived.

Assault and Battery do that thing were one starts a sentence and the other finishes it. Perhaps as a side effect of this what they say tends to be cliché and predictable.

Assault and Battery were originally an attempt by LexCorp to replicate an alien symbiotic link used by some of the more obscure members of the Invasion. The twins who were used as volunteers escaped, and have been seen in various massive brawls here and there, fighting for whoever pays them best.

Advantages:
Fighting Array (with each other, using unarmed attacks or their chain). 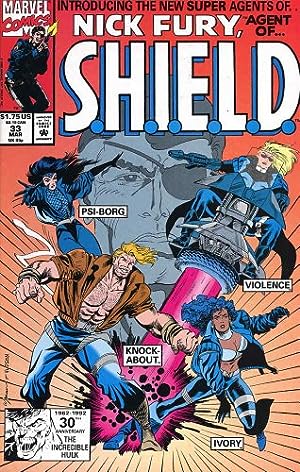