Time passes in the Astro City setting at the same pace than in the real world. Thus, while Astra originally appeared as a little girl, she’s now an adult. This profile was written circa 2010 though, and thus doesn’t cover her later appearances.

Astra can convert her entire body into a special form of energy. In this form she :

Astra Furst has amazing genetics, received the best science-oriented education in the world and grew up in a peerlessly stimulating and nurturing environment. As such she is extraordinarily intelligent, perceptive, physically and psychologically healthy, and collected.

She spent her entire life immersed in the most extraordinary aspects of the universe and super-heroics. Thus, her world is a vast and bizarre one where she is nonetheless very comfortable.

She’s highly proficient with multiple flavours of physics (particularly high-energy physics), theoretical and applied computer science, various forms of engineering (particularly electronics), etc.. Furthermore, she is a competent software and hardware hacker. Her education in the humanities was more ordinary, though.

Astra’s clothing is programmable so she can instantly switch to her First Family uniform. It can also switch to various speciality clothing — such as cold weather gear, or pyjamas — and has properties similar to unstable molecules in the Marvel Universe.

Like all First Family members, Astra will often be equipped with mission-specific inventions built by Augustus Furst. Examples have included a Kirbyesque cerebra-circuit brow attachment to counter telepathic assault, or a “bug out” bracelet to instantly teleport back home.

In 2009, Madame Majestrix made Astra the Majestros-Third of Monstro City and the Atlantic Plains. Which means that she is the third in line to the throne after Rex. As the princess of Monstro City, Astra has privileged access to the subaquatic realm.

On her mother’s side she is among the tribal hierarchy of the Animal-Men (or Beastmen). However, the long-lived Beastmen consider that Astra will not be an adult until she’s 45 (in 2031).

Madame Majestrix gave Astra a “power scepter” in 2009. It can apparently overclock Astra’s flight speed and other energy abilities. In DC Heroes terms it might be a Gadget with some APs of Power Reserve or Enchantment.

Astra is a member of the First Family, the Astro City equivalent of the Fantastic Four.

The roots of the Family are the super-genius Augustus Furst and his brother, two-fisted salt-of-the-earth veteran Julius “Julie” Furst. These are loosely based on Reed Richards (Augustus) and the famous comics editor Julie Schwartz  mixed with Ben Grimm (Julius).

Augustus’ third wife left him for Julie and Gus’ enemy, Prince Kaspian of the Animal-Men tribes (a sort of Namor figure). However, due to her previous exposure to alien energy her babies were born mutated.

She contacted her ex-husband so he could teach the twins to use their devastating energy powers. Augustus Furst eventually adopted little Natalie and Nick. Natalie can loosely be seen as a mixture of Scarlet Witch (Wanda Maximoff) and Elasti-Girl (Rita Farr), and Nick as a sort of Human Torch (Johnny Storm) with something of Quicksilver (Pietro Maximoff).

The First Family repeatedly clashed with the subaquatic and very Kirbyesque realm of Monstro City. This kingdom was ruled by the gigantic and immensely powerful Madame Majestrix. However, the Queen’s teenage son, the dinosaurian Rex, grew fascinated with the surface world. Eventually, he defected from Monstro City.

This resulted in a major crisis and invasion as Madame Majestrix wanted her son back. But the Silver Agent helped the titanic royal calm down and reach a peaceful agreement.

The super-strong Rex remained with the First Family. As they became adults he and Natalie Furst developed a relationship – and eventually married. In 1986 they had a daughter, Astra (“the stars” in Latin). This was presumably done through biological engineering of Rex’s semen then artificial insemination.

The First Family lives in a science citadel on the outskirts of Astro City. It was built on Mount Kirby, which dominates the Northern neighbourhoods. The First Family headquarters are at the very top, above the nearby Mount Kirby Observatory.

As a First Family member, Astra received a tailored, intensive regimen for her education, health and training. For instance she was given special food that helped her develop her energy powers. Her tutor was a dedicated artificial intelligence with a gigantic database, called Mr. Smartie.

Even as a tween she had significant scientific knowledge, the training to operate in superhuman crisis situations, and was exceptionally intelligent and well-adjusted. She thus was in a field with the First Family by age 8 or 9. This wasn’t pants-on-head crazy, since her powers made Astra very difficult to hurt.

In 1996, Astra Furst felt a need to discover how other little girls lived. All that she and her mother had ever known was the Mount Kirby science citadel.

She hacked the locator in her costume and joined a random Astro City elementary school. Little Astra hacked their systems to create a fake ID. She then used her powers, programmable clothing and cleverness to live off the street. The First Family shook Heaven and Earth to find her, assuming that one of their innumerable enemies had kidnapped Astra.

However, Astra focused on having her big exploratory adventure, being too young to realise how much her parents would worry. 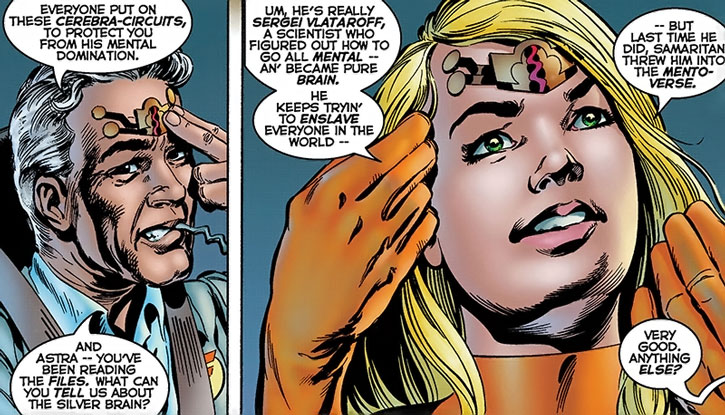 Being intrigued by hopscotch and having always been taught to excel at everything, Astra spent days practicing her hopscotch skills until she could beat the best player in school. As she did an energy form flyby as a victory dance, her parents soon found her.

After this incident, she was grounded for a month. However, Natalie and Julius Furst convinced the rest of the Family to let Astra join a normal school and have a less sheltered life.

Saviour of the universe

When Astra was 13, she saved the multiverse. A far-future scientist had begun to destroy it all with a multiversal collapsar  wave. But Astra, being entirely made of energy, could approach the wave without being destroyed.

In a desperate plan by Augustus Furst, she grazed the event horizon and had some of her energy absorbed. Then she was teleported back to safety.

Astra’s living energy messed up with the process. It was too unpredictable for the future scientist to compensate for – as long as Astra regularly ran mental exercises that were quantically mirrored by the stolen energy. The event horizon  no longer progressed. After a few years Astra was replaced by a wave generator stimulating the stolen bit of energy.

The dimensional damage put innumerable realities in direct contact with each other around the frozen meta-collapsar. Various collisions between dimensions  occurred. It was now possible to navigate from one to the other from the new central point.

This multiversal aleph  maintained by Astra’s mind was called the Gordian Knot. It became a place of intense cooperation between a huge number of civilisations, to control the damage and prevent conflicts.

An elite joint effort — including a Terran representation — was organised in the Gordian Knot to fish out and rescue the uncountable universes already absorbed by the collapsar. Though this was a long and extremely difficult process, the joint team gradually met with encouraging successes.

In 2009, Astra graduated from a college in Ohio. After saying goodbye to her two best friends (whom she had met all the way back in elementary school), she took a break to determine what sort of occupation she would take now that her studies were over. 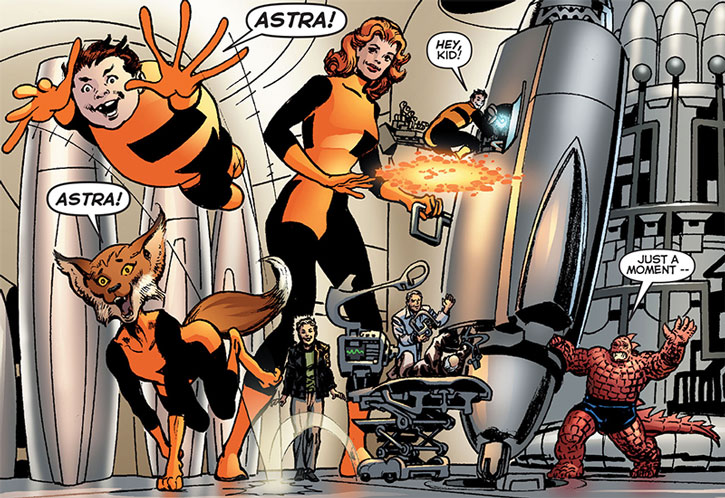 By that point Astra Furst was more famous than ever. She had been relentlessly hounded by paparazzi for years. The Inside Scoop celebs rag was obsessively focusing on her, to the point that the First Family added special screens to the schools Astra joined to prevent unauthorised video and still picture footage.

The Scoop still hounded her outside with floating dronecams. And of course they seldom hesitated to just make stuff up – such as monotonous rumours about romantic ties with young celebrities that were hot that week. Her actual dates, with the young super-hero Skysweeper (Jason Szolda) or the alien Prince Gavrad of Tellurin, were ruthlessly exploited by the celebs press.

During her last year or two in college, Astra dated a student in graphic design called Matt Zimmer. However, he felt out of his depth. Furthermore, a misunderstanding led him to believe that Astra would dump him because of this.

Expecting a break-up soon, he made a deal with the Inside Scoop and was equipped with a spycam – which Astra sensed, resulting in a break-up.

After this incident, Astra decided to join the team rescuing universes in the Gordian Knot. The Knot’s population is so diverse that Astra attracts much less attention than she does on Earth, allowing her to live without being stalked.

Astra is very blonde. She was always super-pretty and in excellent shape – whether as an adorable healthy little girl or as beautiful young woman.

Her energy form and beams are, fittingly, surrounded by Kirby dots .

In her daily life Astra often goes by “A.J.” in the oft-futile hope of people not recognising her, since her first name is too distinctive.

Astra is exceptionally mature, courageous and intelligent. She’s very well-adjusted, curious and full of energy and empathy. Very little impresses her. She grew up in an epic, cosmic, surreal world and all this stuff is just a normal part of her life.

She’s a born super-heroine and adventurer, and is eager to serve and protect.

Her only real problem is that she doesn’t want to be shut out of her normal life as a young woman by her power and celebrity. Astra is very grounded and hard-working, and she’s fed up with being treated like a super-star and fantasy celeb — and with the media circus hounding her.

As a kid Astra was particularly close to her mother Natalie and her “uncle” (actually her granduncle) Julie, who spent a lot of time with her. Her father Rex was much more distant, perhaps in part because of his immense strength and huge hands making it difficult to interact with a little girl. 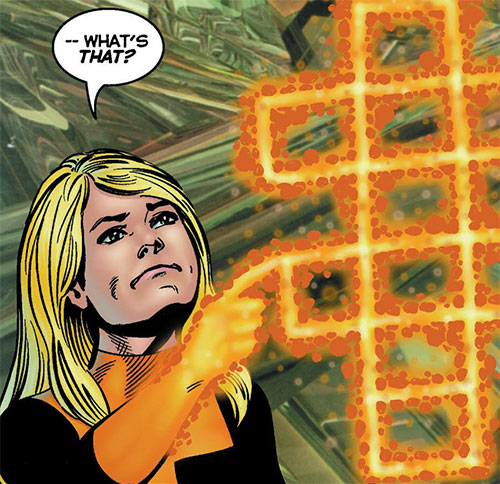 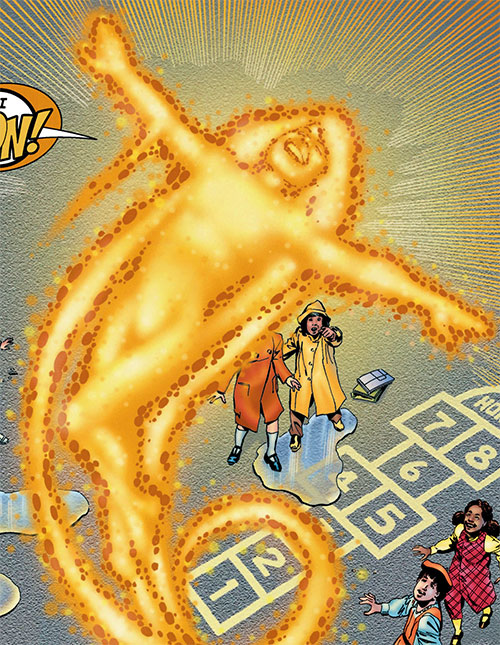 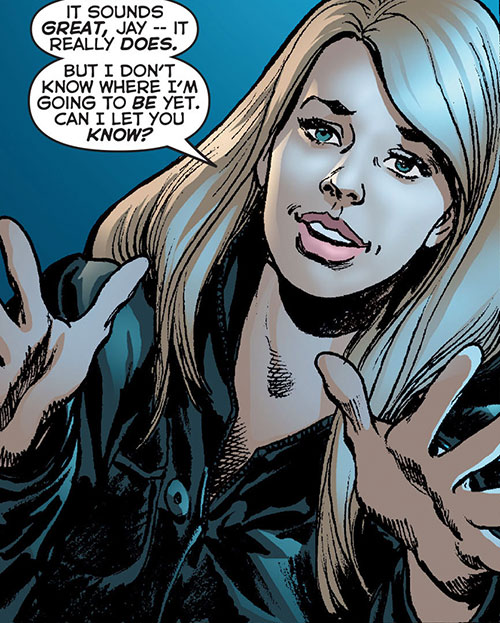