Asylum was part of a sort-of-team called Psionex. Though Psionex clearly had potential, it wasn’t ever quite used.

Asylum’s entire body has been converted to a black mist-like substance, possibly Darkforce . It usually occupies the space of a human body 7’ tall. However, she can extend clouds and tendrils to occupy a much greater area, filling the space of a large room.

As such, she is an insubstantial ghost. She cannot normally be attacked by ordinary physical means. She is virtually immune to attacks involving physical force or radiant energy. Her insubstantial form being hard to control, she was outfitted with a special collar and mask. These seemingly keeps her form contained to some extent.

More recently, Asylum has been able to project tendrils of her body forcefully outward as an concussive ranged attack.

Asylum was part of an experiment by the genetics research firm GeneTech to create artificial powers in selected test subjects, dubbed Psionex.

Asylum was a mental patient who underwent the treatment to unleash her genetic potential. In the process, she became an immaterial gas-like wraith with the power to bring out other’s hidden fears and insecurities.

The fledgling hero group the New Warriors were investigating GeneTech. They came into conflict with Psionex. After initial difficulties, including getting captured, the Warriors cleaned up on Psionex handily.

The second time they clashed, it was because Psionex had decided to terminate their association with GeneTech. They had commandeered the facility. The New Warriors took on the improved and up-powered Psionex, and fought them to a standstill.

During the battle GeneTech’s founder, Harmon Furmintz, released the irradiated remains of Terrax, former herald of Galactus, from their storage containers. He was hoping to gain Terrax’s powers and stop the fight. Terrax took over Furmintz’s human body, destroyed GeneTech, and left to seek out the Fantastic Four.

Two of the Psionex crew, Mathemanic and Impulse, assisted the New Warriors in the attempt to stop Furmintz/Terrax. But Asylum, Pretty Persuasions and Coronary instead fled the scene.

Asylum was last seen in New Warriors #40. She went wild in Central Park and was apparently blown apart by Speedball.

A ghost of black, fibrous misty tendrils, wearing an elaborate golden collar and a skull-like mask.

Asylum was silent, did her bit, and helped her teammates. It did seem as if she really got off on mindraping people, but that can be attributed to her mental instabilities.

Of all her teammates, she was the most mysterious… She didn’t even have the benefit of a name.

Asylum is a meta who experienced her first manifestation while incarcerated at Arkham. Spurred on by the Joker to fits of manic destruction, she faced the Batman, bringing out all his innate fears and mental foibles. She was defeated when Azrael lent a hand, unable to penetrate his hidden fears because of his “Program”.

She was turned over to STAR Labs for study, since no normal cell could hold her. She waits in cold storage for some kind soul to cure her insanity or to neutralize her metagene.

One attempt was made by the agency Checkmate to user as an agent during a mission. She wore a variation over the black-and-gold Checkmate uniform – the illustrated costume. Although Asylum and her handlers performed well, she managed to escape with the uniform. It gave her the ability to manipulate objects and thus greatly increased autonomy.

Drawbacks:
Altered Anatomy, MPI (when originally found, Asylum was catatonic. It was never shown how she was brought out of that state, but the possibility always exists that she can be put back into it.), Strange Appearance, SPR (Mute).

Equipment:
ASYLUM’s MASK AND COLLAR [BODY 07, R#2, HP Cost: 37, Advantage: The Mask and Collar Neutralize part of Asylum’s Dispersal Power so she can manipulate objects with tendrils of fog].

The first time Psionex faced the New Warriors, she did not have her Mental Blast, and she had Rich Friends(GeneTech). 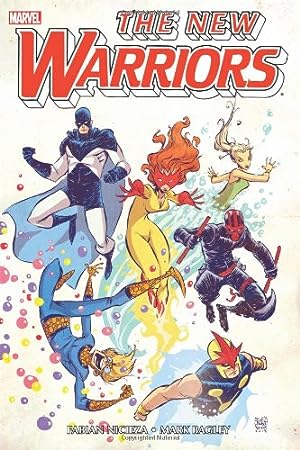