Athena Asamiya has been a playable character in SNK video games since forever, or at least 1986.

She is a psychic martial artist who may be descended from the Ancient Greek goddess. She uses her great ability to fight in the name of… well, becoming a pop star. In a lot of ways Athena is a very original character and very animé.

This profile is focused on her more recent appearances as a brawling video games playable character.

She demonstrated a vast array of psychic powers, including:

She is also a famous pop star in Japan. Her idoru skills set includes singing, dancing and being super-cute. It also made her a millionaire.

In more recent years she’s able to develop complex websites on her own. 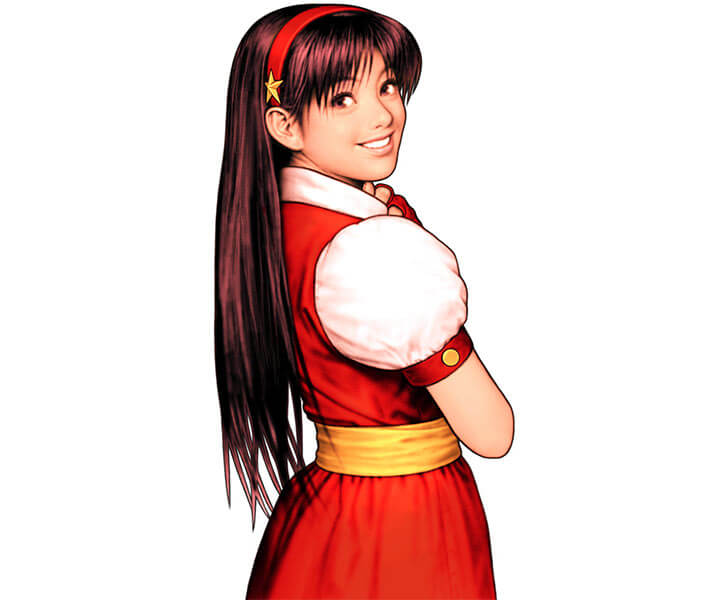 Athena made her debut in a old school shooter by SNK. Not really much of a story there. It boils down to “cute anime girl shoots stuff with psychic powers”.

The games have been largely forgotten. They had a bit of following back in their day, but old school copies are hard to find and generally command quite the price on Ebay. Furthermore, this series never saw the light of day outside of Japan.

But when SNK got the bright idea to try and take on Street Fighter’s growing market, they brought back a lot of obscure characters. Such as Athena and her partner Sei.

Athena was said to be the reincarnation of the Ancient Greek goddess. She always had a strong sense of right and wrong, and always used her innate psychic powers for good.

One day while walking home from school somewhere in rural China she stumbled upon an unlikely pair. A young man about her age and an old drunkard were fighting a giant. Sensing that the giant was evil and that the pair were having a hard time taking him down, she promptly blew him away using her psychic powers.

That was how she befriended her long-time partners Sei Kenso and Chin Gentsai. The trio would continue to train together for the rest of the series.

Their dynamic has always been a bit awkward. Sei has unrequited love for her. And both youths wish that Chin would stop drinking for health reasons. Chin, being far older had always been their master. However, he has been an irresponsible drunk all his life. Athena and Chin have always acted, more or less, as his caretakers. 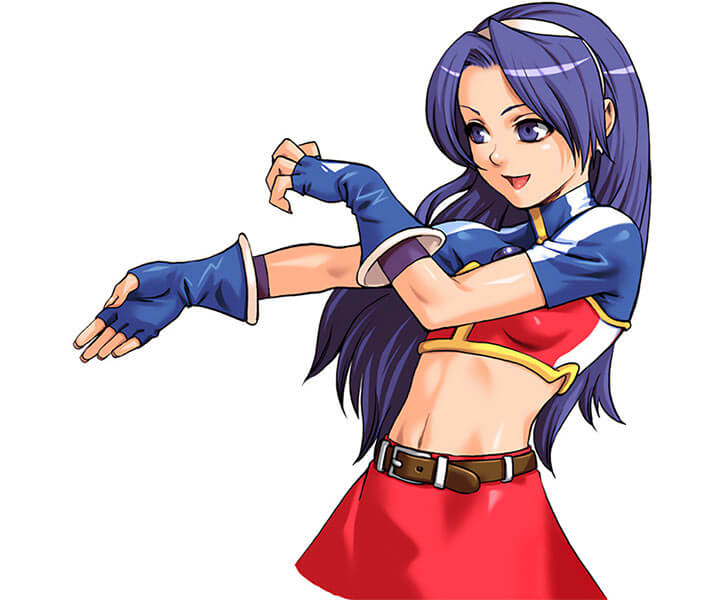 Athena eventually transferred schools to Japan as part of a study abroad program. Somewhere along the line, she became a mega famous pop star.

The fact that she was born and raised in China has always been a bit of an oddity seeing how she has pretty much fulfilled every single Japanese animé trope. She’s so anime that it would likely make the Emperor of Japan blush.

She also just so happened to be at the same high school as later champion Kyo Kusanagi. She developed a huge crush on him, but let the matter go after she befriended his girlfriend Yuki.

Sensing that a sinister force was behind the worldwide King of Fighters tournament, Athena and her team signed up as your generic do-gooders.

The team didn’t fare well. They likely washed out pretty early in the tournament. But this didn’t get the always upbeat Athena down, and they would participate in future installments.

Given her status as a pop star her team likely got a ton of media attention.

In the main continuity, Athena and company likely took some R&R. And continued training in both martial arts and their psychic powers. 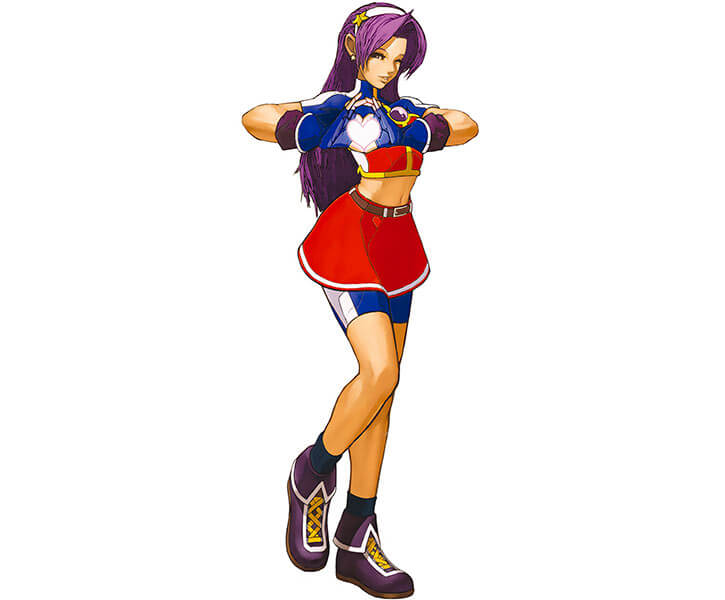 The team finally saw a change when Chin adopted Bao, a young child with immense psychic power, as a student. But they continued to train together and right wrongs.

Bao is a controversial character. His storyline never really got fleshed out, and in-game he is a quirky character who’s both over- and under-powered. (How is that even possible? No one really knows or seems to care.)

Athena and her teammates fought bravely. But newcomer K’ and team were the ones who confronted the final boss Krizalid.

Athena’s team was in the base when the big bad hit the self-destruct button supervillain style. She saved her teammates by using her psychic powers to stop the tunnel they were in from collapsing. However, the strain was too much and she passed out after she injured her leg.

Ever the dutiful teammate Sei stepped in. He saved her at the risk of his own life, but lost his psychic powers to overexertion. After a bit of an awkward recovery Athena was eternally grateful for Sei’s sacrifice, but also forced to admit that she had zero romantic interest in him.

Still middle of the pack. K’ and company once again took on the big bad Zero, but not before he destroyed most of (dangerous) South Town with his laser satellite.

While crashing, the damaged space laser misfired. Before Athena could stop him Bao bravely stepped forward and managed to absorb the beam before it could do any further damage.

This gravely injured the young boy. But he somehow psychically contacted Sei, which somehow reignited Sei’s psychic powers. With time and training he would go on to fully regain his special abilities. 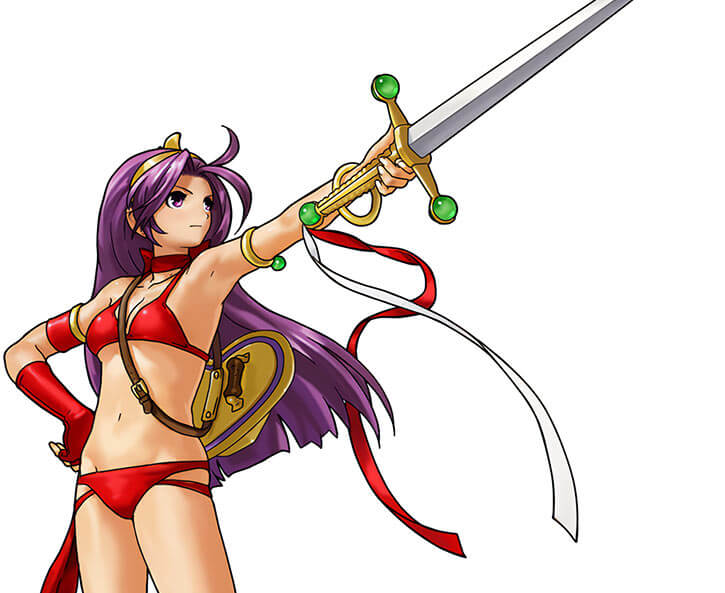 The final instalment of the NEST Saga. K’ and team manage to take down the criminal syndicate.

Athena and her team are just kind of there mostly as bystanders as their team doesn’t really have an impact on the main storyline.

Non canon dream match. Curiously the Psycho Soldier Team seemed to get a bit of a push towards being one of the stronger teams, which is largely irrelevant as there was no storyline to speak of.

Oh, and the system reverted back to three people teams. Bye-bye Bao!

They decided to call themselves the High School Girls Team. Which is a bit odd as that would mean that Athena has been a high school student for nearly a decade.

They placed second to last and didn’t really do much.

Chin went into retirement. Athena and Sei therefore recruited newcomer Momoko, who has hardly any storyline to speak of.

Rumor had it that Momoko was also an idol herself and that’s how she came to know Athena. She’s a bit of an odd character with custom combos. Entering the wrong sequence will have her sing off-tune J-pop while doing pitiful damage. But entering the correct sequence results in a song and dance number which thoroughly destroys opponents.

Momoko didn’t really resonate with fans and unfortunately (or fortunately?) this was her first and last appearance. 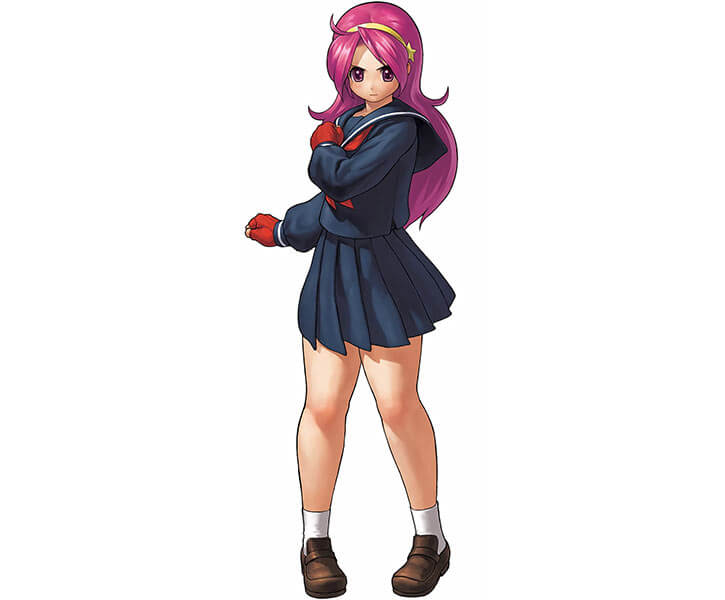 Midway through the development of this game, SNK axed the Atmosphere Engine in favor of trying to go full 3D. This meant producing a different game – King of Fighters Maximum Impact. As a consequence, KoF XII was released cheaply as an unfinished beta.

Athena sported a new high school school uniform with a pretty short skirt in all its panty flashing glory.

Athena competed as a solo entry. Her story didn’t really get fleshed out – she was likely just thrown in due to her enduring popularity.

This fully 3D game was a huge departure from the mainstream KoF series in both story tone and game play. Not that any of that mattered – it was neither a commercial nor a critical success. KoFMI was officially labeled non canon and the series indefinitely shelved.

However two other characters, both sisters, were said to be rival pop singers with mystical abilities. Each of them said to be the personification of both good and evil. This rivalry with Athena could’ve been an interesting angle, but we’ll likely never know. 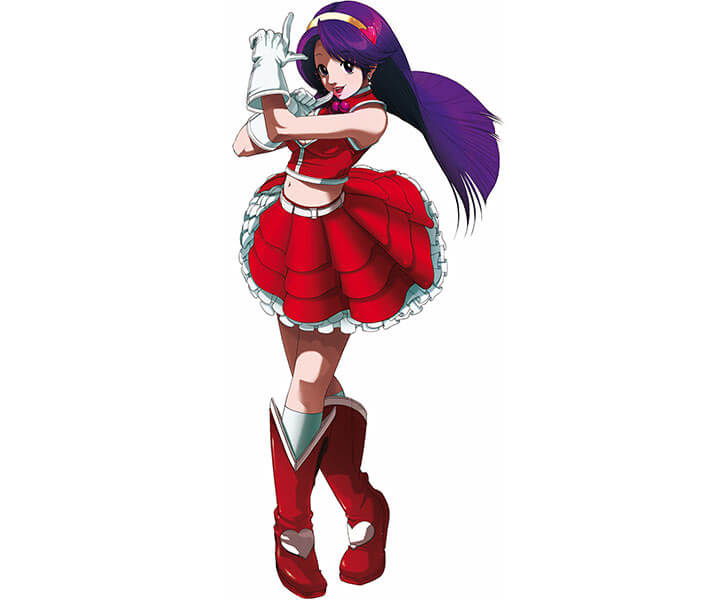 The Ash Saga was concluded with this game.

Athena once again linked up with her old crew and they are still ranked mid to lower tier. Longstanding fanboy pressure resulted in Athena wearing a high-school student sailor-style uniform, though the developers long thought it wouldn’t work for overseas audiences.

Nothing major here either. Athena fought along with Sei and Chin and didn’t have a major impact on the main storyline.

Athena has been a confirmed character for this upcoming-as-of-this-writing game. No word on who’s she’ll be teaming up with.

Athena has been the only KOF character to change clothes every year!

The only constant accessories are her beads and her star hair pin!

Athena was always a highly anticipated character for the King of Fighters lineup. Developers admitted that they are constantly working to keep her in the series. 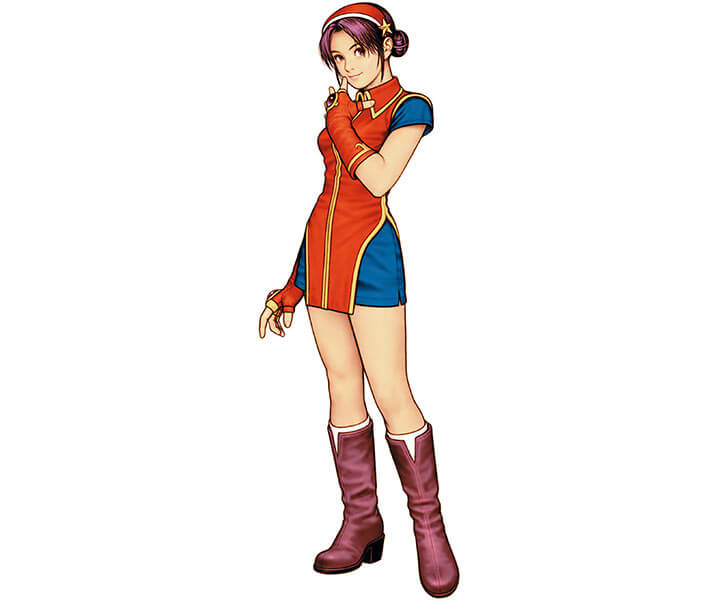 “Everyone got so strong ! I gotta train harder !”

Insert as is. Perhaps she has connections to the entertainment world. She likely would have petitioned for and been accepted into the Justice League. 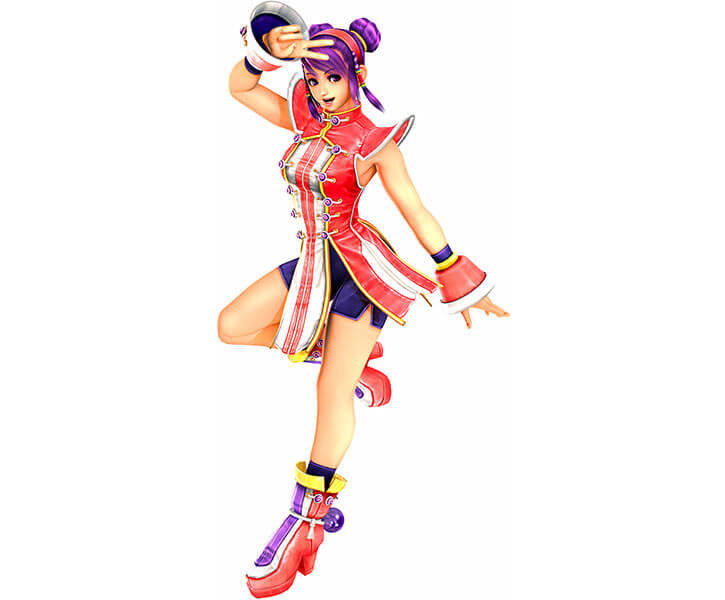 She usually carries a microphone around, but that’s about it.

She used to have a MIA toward Kyo Kusanagi early on in the series, but that plot has been totally dropped. Either than or she just bought it off.