DC’s First Issue Special, starting in 1975, was a way to throw characters at a wall and see what stuck.

This profile was done years before his 2008 return, and thus only covers the First Issue Special appearance.

Given the low amount of material, a lot of this profile is speculative. This entry is chiefly intended for gamemasters who’d like a base to build upon to introduce a Kirbyesque character in their campaign.

Or to turn him into a Player CharacterRPG characters played by a player, rather than the gamemaster or the computer..

And obviously, you could have fun plugging him into other Kirby bits. Stuff you could make up includes :

Atlas is superhumanly strong. He can crush solid rock within his hands.

Furthermore, he is a formidable hand-to-hand fighter. He displayed fantastic speed and coordination.

Even as a child, he was as strong as a full-grown athlete. And a competent wrestler. 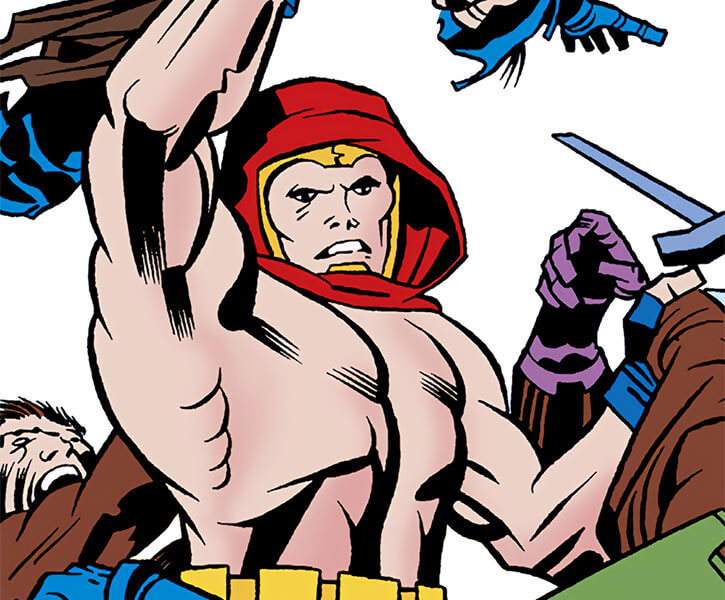 Atlas hails from a distant heroic fantasy land, belonging to the past.

It might be the past of another fantasy dimensionOther realms of existence that are not our universe. Such as Myrra or Skartaris.

As a child, Atlas lived in a village of the Crystal Mountain people. These folks are presumably superhuman, given Atlas’ abilities.

However, the village was overrun by an army of slavers.

Atlas’s father hid his kid in a cave. He then fought powerfully against many men, but was eventually killed.

The naïve child rushed to his father’s help. But he was grabbed by the leader of the slavers, a lizardman named Hyssa. Lizardmen are largely human persons with vaguely amphibian/reptilian facial features, and possibly some other lizard-like traits.

To Hyssa’s surprise, the superstrong child broke free from his grasp – and fled. 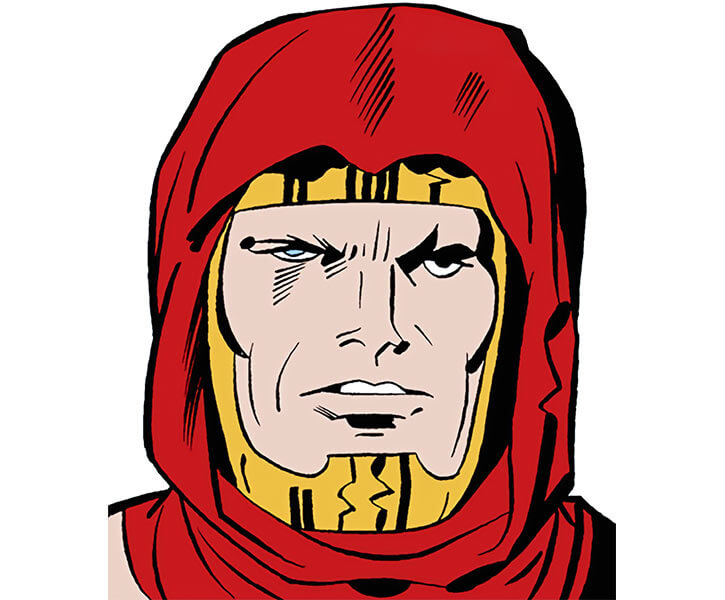 Sprinting to cover in a nearby marsh, the boy met a wanderer named Chagra.

After the slavers left, the duo entered the burning ruins of the village. The boy recovered a huge gemstone hidden therein. This gem, a fragment of the Crystal Mountain, is the traditional treasure of the chief in Atlas’s culture.

With his dad gone, Atlas was now the leader of his stolen people.

Apparently knowing of the Crystal Mountain, Chagra swore allegiance to Atlas. He became his travelling companion. Chagra’s experience as a traveller supplemented his young chief’s heroism and power.

(Essentially, a permutation over Herakles and Iolaus.)

He also was crowned as the Champion among gladiators at least once. During this fight he wielded a weapon looking like the mast of a small ship. 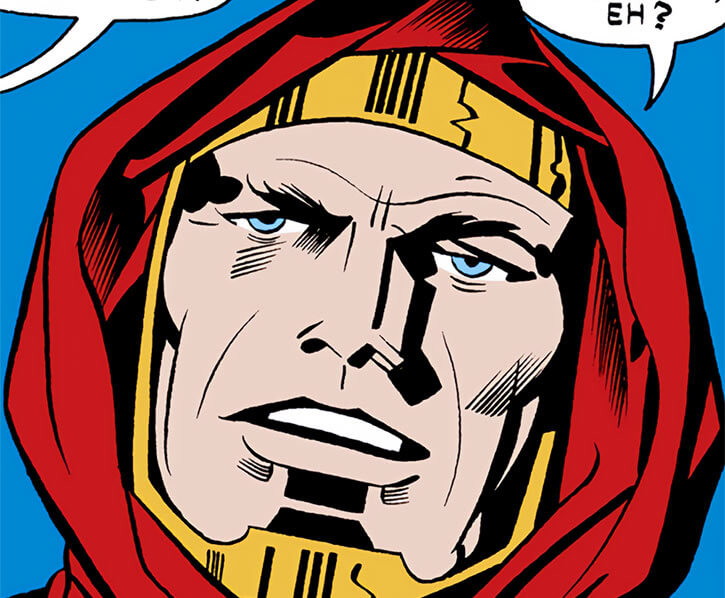 Years later, Chagra asked Atlas to take him to Crystal Mountain. Apparently, only natives could safely navigate this land.

Atlas agreed, on the condition that Chagra first take him to the Lizard Kingdom. To get there, Chagra first had them cross the Forbidden Region of Fire, with which he was familiar.

They reached Hyssa, a city of the Lizard Kingdom. To gather funds, Chagra became a street barker. Atlas performed feats of strength and wrestling that amazed onlookers.

Soon enough they ran into trouble with a local noble claiming right of way. This swiftly escalated into a confrontation with the city guard – and from there with the ruler of the city, Hyssa.

Atlas immediately recognised the slaver from his childhood.

What happened next is unrevealed, and will likely remain so… forever !!

Atlas is a huge, muscular fellow with striking blue eyes and a very Kirby-esque outfit.

Everything about him screams “hero”.

Although his story is a barbarian heroic fantasy one, he does not look barbaric in the least.

A straightforward, noble adventurer with something of a superheroic code of honour mixed with Hercules-like trials and travels.

Atlas has a tremendous, and justified, confidence in his moral superiority and his might. He does not think twice before calmly challenging the guard of an entire city to fight in the name of fairness.

There is a strong “noble in exile” cast to his character. His entire attitude demands that he be treated with a respect he does not have to ask for. Of course, he always acts nobly, without any compromise.

Atlas isn’t verbose. Although he speaks eloquently when needed, he prefers to keep it brief – and chiefly talks when it is necessary. 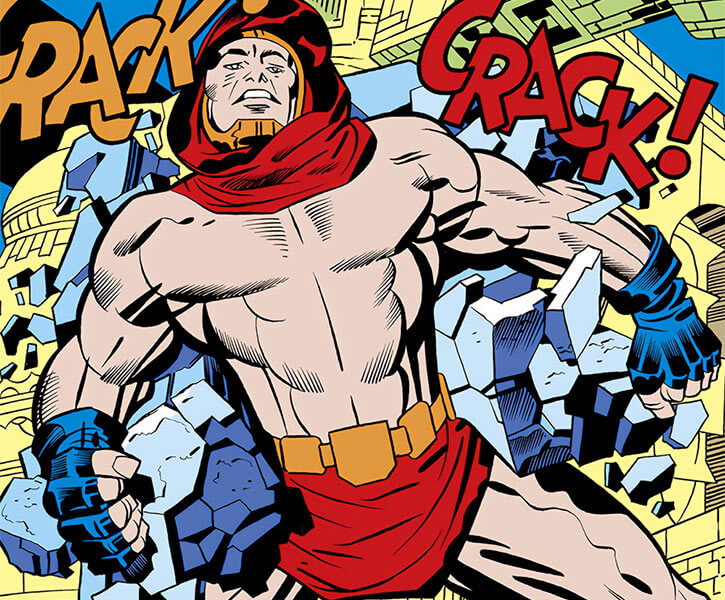 “I am Atlas !… and I care little for pompous worms who travel on the back of slaves !!”

Giants walked the earth ● 2 points ● Descriptor: Crystal Mountain ancestry
– Feature — Atlas seems to be at least 7′, which comes in handy more often than not.
– Protection 1.

Here I’ll consider that Chagra is a fellow Player Character.

The selection of Advantages is largely arbitrary for lack of material. I went with a general “epic, benign hero of destiny” theme. 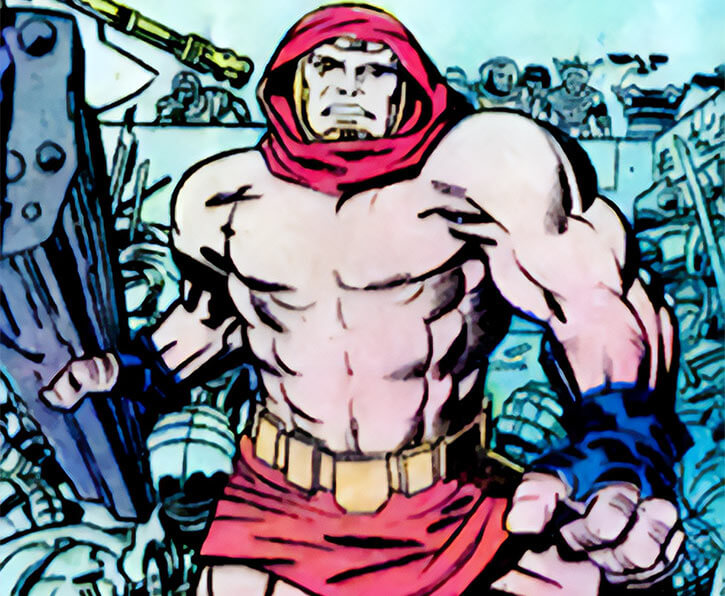