Atlas has lost the ionically -powered abilities. Thus he’s now only mortal, although able to grow to gigantic heights.

Since he’s reverted to normal flesh, gone are his immortality, environmental invulnerability and highly enhanced strength and durability. He’s still quite strong though, possibly because he always use some small amount of his Growth power. And he also remains dangerous for most opponents when he reaches his full height.

Additionally, whenever he grows, his strength increases at a higher rate than for other growing characters. This means he’s usually stronger than similarly-sized opponents.

Erik Josten was born to a small, working class family just outside Madison, Wisconsin. Erik ran with a bad crowd, constantly getting into trouble with both the law and his parents. It was because of this that tragedy struck when Erik was 17.

His little sister, Lindy, was constantly trying to tag along with Erik and when he and his friends decided to drive the 30 miles to Madison one spring evening, Lindy tried to follow on her bicycle. Needless to say, Lindy couldn’t make the 30 mile ride. Night fell, and Lindy’s eyes began to droop, and that was when a car came around a blind curve and hit her head-on.

Lindy managed to hang on until Erik got to the hospital before dying in front of him. Erik, never the strongest of people, was traumatized by this event and ran away to join the Army, hoping to forget his pain.

Unfortunately, Erik couldn’t stay out of trouble there, either, and soon went AWOL from his unit to become a mercenary. It was during that phase of his life that Erik found himself in the employ of one Heinrich Zemo.

Erik found himself enthralled by the man’s leadership and charisma. It was also there that Erik first met Zemo’s son, Helmut, who was destined to take up his father’s title of Baron.

Erik was content to work for Zemo. He was paid well, all his needs were provided for, and he had few real responsibilities. He simply did what the Baron told him to do and everything was fine. But alas, this was not to last. Before long Captain America tracked Zemo to his South American headquarters.

A confrontation ensued which ended with the Baron crushed by an avalanche. Following Zemo’s death, Erik suddenly found himself unemployed and with nowhere to go.

Always running into the Avengers

Then he met the Enchantress, one of the Baron’s old allies, who offered to give him great power in return for his service. Erik agreed and, with the help of the ionic accelerator that gave Wonder Man his powers, was transformed into Power Man and battled the Avengers.

He later partnered with the Swordsman under the leadership of the Black Widow and battled the Avengers again. He also fought Captain America. He served as an agent of the Mandarin, then joined the Lethal Legion. Things began moving quickly for Erik from that point on. He bounced from employer to employer, from crime to crime, but was always defeated.

He worked under the criminal mastermind Egghead in his plot to take over the world through nuclear extortion, but was defeated by Wolverine leading the first incarnation of Alpha Flight. He lost his name, Power Man, to Luke Cage. He joined Count Nefaria’s Lethal Legion II, but like all other Legionnaires then had his powers drained into Nefaria, turning the Count into a vastly powerful metahuman.

Almost powerless he adopted the name “the Smuggler” and confronted Spider-Man.

He lost his remaining ionic powers and sought Dr. Karl Malus, well known in criminal circles as an amoral genius specializing in superhuman physiology. Malus revitalized his ionic powers and gave him the ability to change his size at will through the use of Pym Particles. Adopting the name of Goliath, Josten fought the West Coast Avengers.

Along with his growing abilities, his body continued to evolve its original properties and he became a being of the same sort as Wonder Man. A ionically powered, immortal and very powerful person, no longer human. His sheer power as Goliath was impressive, and he was used as a lackey by numerous villains (see Goliath writeup).

He then joined Grim Reaper alongside Man-Ape, Nekra and Ultron battling the West Coast Avengers again. He was a member of the Masters of Evil IV during their siege of Avengers Mansion, where he brutally beat Hercules. He was among the prisoners who tried to break out of the Vault but were stopped by Freedom Force and the Avengers.

He allied himself with criminal leaders during the Acts of Vengeance to battle Spider-Man. He also battled Wonder Man in an attempt to usurp his fame and was defeated and put in jail by Giant-Man. He was kept heavily drugged in prison until escaping and attempting to get revenge on Wonder-Man.

Instead he found Hawkeye in his guise as Goliath II alongside Mockingbird. It angered him that another hero was taking his name again and they fought and he was defeated.

Eventually, Erik was kidnapped by a race of aliens called Kosmosians and subjected to a series of cruel experiments. He was soon rescued from this torture by Hank Pym, now Giant-Man, and returned to Earth. Before long, however, the Kosmosians located him again and took him back to their dimension.

He would have lived an eternity of torment, being nigh indestructible, were it not for Baron Zemo’s recruiting drive.

Zemo was determined to exploit the disappearance of high profile heroes such as the Avengers and Fantastic Four in the aftermath of the Onslaught crisis. His plan was to built a fake hero team, known as the Thunderbolts and made of the best members of his previous villainous army, the Masters of Evil IV.

Zemo and his crony, Techno (aka the Fixer) wanted Goliath on the team, and fetched him from the Kosmos dimension. Rescued and again under the command of a man he had always greatly respected, Josten gladly went along the Thunderbolt charade ; as a “hero”, he was code-named Atlas.

His powers were modified so that Pym couldn’t easily recognize him, and he was back to normal flesh again. His face was altered so he wouldn’t be recognized.

However, Zemo’s devilish plan started to unravel around Goliath for two reasons. The first was Dallas Riordan, the liaison between the “heroic” Thunderbolts and the NYC Mayor’s office, with whom he began a relationship (it later turned out she apparently was the villainous Crimson Cowl).

The second was the young and enthusiastic Jolt, who, much to Zemo’s consternation, joined the Thunderbolts in order to put her own superspeed powers to heroic use. To Josten, however, she was a protégée who strongly reminded him of Lindy, his younger sister.

While the revelation that he had the potential to be a good man slowly crept its way into Josten’s mind. He acted against Zemo’s direct orders, something unheard of for him : Zemo wanted to kill Jolt as being a huge security risk, and Atlas successfully moved in to protect her.

That was part of the major crisis which shook the Thunderbolts. The various members, not yet heroes but certainly no longer villainous, broke away from Baron Zemo to forge their own life as the Thunderbolts. Josten chose to keep the “Atlas” name as an indicator of the values he now believed in. He even swore he would never kill again.

Josten still has some unresolved relationships with Dallas Riordan, who’s really the new Citizen V, and might have something going on with the Man-Killer.

Erik Josten is not much brighter than before, as he’ll certainly admit. But his values have changed to a form of altruism. He’s still, however, a chain of command man, as he himself put it. He’s good at taking orders, and he’d rather have someone else make the choices for him. However he’ll no longer trust any evil mastermind to make those choices.

His basic lackey nature has mutated into a great respect for the notion of loyalty. Unfortunately, while it makes him a rock-solid member of the team, it also means he feels guilt over his “treason” of Zemo. As can be surmised from the above, Josten has a self-esteem problem.

I know it’s not incredibly original but the various Thunderbolts could have met while serving in the Suicide Squad. After having their sentences commuted to time served they could have regrouped “on the outside “ to continue their villainous ways by disguising themselves as heroes in the absence of the JLA (granted, you’d have to extend the amount of time between the breakup of the Diana-led League and the “Magnificent 7” League).

Gradually, though, the individual Thunderbolts begin to like being heroes…

And, Atlas may have fought Powergirl all those years ago for the “Power” name.

Bonuses and Limitations:
Power Reserve can only be equal to half the APs of active Growth power rounded down. 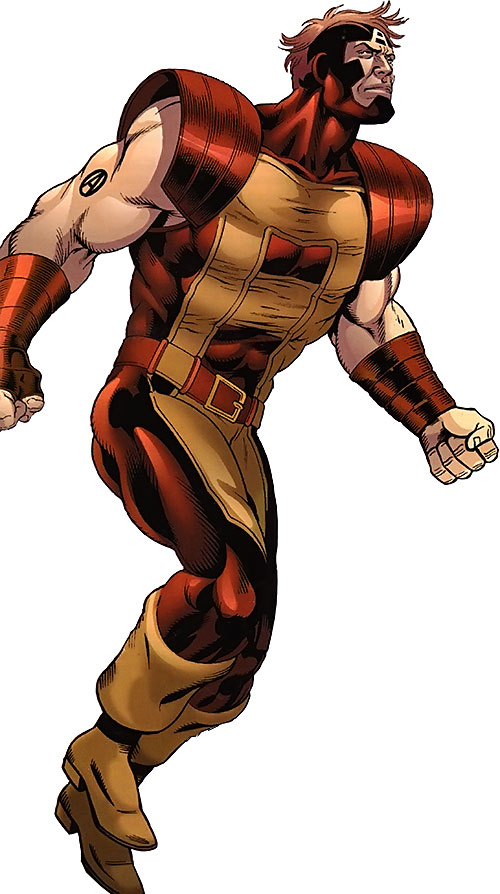