He can survive in space without artificial protection for weeks at a time. His flight speed is sufficient for interstellar travel, though most starships of his time would be faster. His nuclear bolts can melt metallic compounds and break or restructure molecular bonds. They also generate an electromagnetic field capable of disrupting electronic machinery.

Atmos has a trained athlete’s physique. Yet his combat skills are negligible, as he has not had real cause to develop them since being granted his powers. He has faced few foes with powers equal to his own. Thus, he has been able to rely totally on his special abilities.

When Star Boy left the world of Xanthu to join the Legion of Super-Heroes, the planet’s ruling Tribune ordered the planet’s top geneticists to develop a new resident superhero. They chose a former child actor and amateur athlete, Marak Russen, as the most likely candidate. Russen was already known and popular and his genetic structure seemed likely to survive the procedure.

Using advanced genetic engineering techniques developed on Naltor, the scientists prepared Russen to receive unusual abilities. They hoped to recreate Star Boy’s temporary superpowers by replicating the comet radiation that had once accidentally given him abilities equal to a Daxamite or Kryptonian.

The experiment proved unstable. Though it gave Marak super-powers, they were not the expected ones.

Russen, codenamed Atmos, was housed in high style. He was also given the best promotion Xanthian media could provide. His public appearance program and holovised battles so endeared him to the Xanthian people that the entire planet was shocked and saddened when Atmos was stolen away. 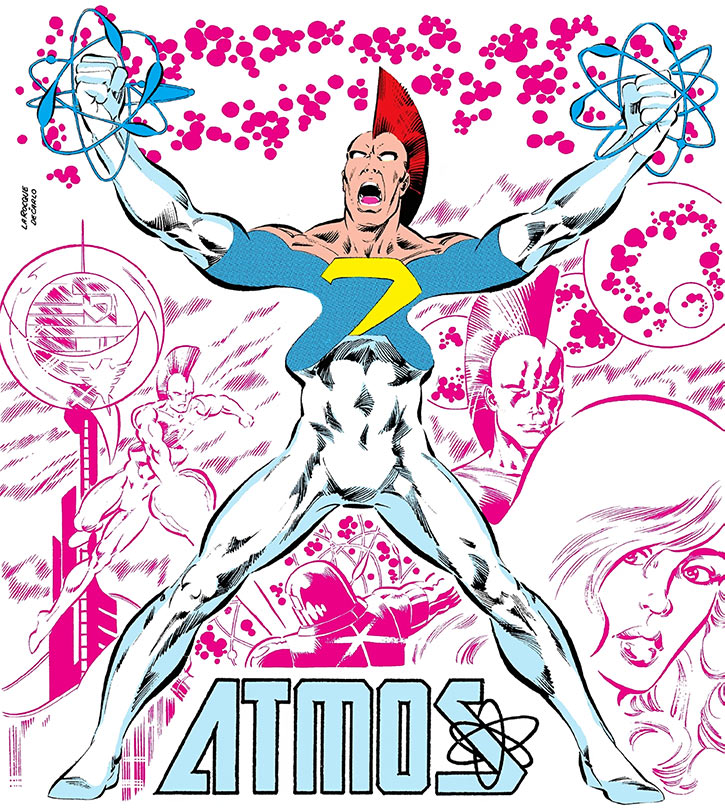 Atmos was one of the earliest victims of what became known as the “Universo Project”. This was a plan of the master criminal Universo to place all super-powered heroes under his thrall and use them to attack the Guardians of the Universe, on OA.

Hypnotized into amnesia and incarcerated on a prison planet, he had a brief romance with a fellow prisoner, the Legionnaire Dream Girl, long-time lover of Star Boy.

When LSHer Saturn Girl freed herself and the other prisoners, Atmos was one of the first to leap into battle against their captors. He then helped provide transport for many prisoners back to their home systems.

The disappearance of Atmos from Xanthu prompted the Tribune to draft Star Boy as his replacement. This compelled Star Boy to resign from the LSH and return Xanthu. When Atmos was found and freed from Universo’s prison, it was expected that he would resume his former position. Instead, Atmos went to Earth to attempt Legion membership and a resumed relationship with Dream Girl.

The Legion, though impressed with Atmos’ powers, was troubled by his arrogance and his imperious manner. They also felt uneasy about the situation between Atmos, Star Boy, and Dream Girl.

Thus they rejected him, offering instead to accept Atmos at the Legion Academy for training. The prideful Xanthian indignantly refused. He was more successful on other fronts, returning to Xanthu with Dream Girl at his side. He then worked in apparent competition with Star Boy for the hearts of the people of Xanthu and of Dream Girl herself.

Atmos was disgruntled by the success and public acclaim Star Boy was finding on Xanthu. This led him to a physical confrontation with the former Legionnaire. He attempted to drive Star Boy away from the scene of an emergency and handle it himself. Star Boy’s Legion training enabled him to quickly and easily defeat the more powerful Atmos and then handle the emergency.

From that point on, the pouting Russen refused to act in public as a hero. Instead, he decided to get back at Star Boy by continuing his relationship with Dream Girl. The couple was not happy, however. Dream Girl still felt guilt over being with him and not with Star Boy, as well as for leaving the Legion.

Her guilt (and perhaps a rumored ability of Atmos to sap the will of others) led her to accept Russen’s numerous infidelities and insensitivities as well. But this finally changed during the Magic Wars.

Despite the crisis striking Xanthu and the entire United Planets, Russen continued to sit at home. He refused to intervene, even when Star Boy and a Legion team came to ask for their help. With that impetus, Dream Girl punched Atmos just as he was waking up, blinsiding him and knocking him out. She then left him and went with the Legion to confront the Archmage on Zerox.

In the alternate timeline of the Five Year Gap, Dream Girl rejoined the Legion. Atmos was apparently found to be not guilty of wrongdoing in hypnotizing Dream Girl, since he joined the Legion as well. Howbeit, it is not believed that the two continued any sort of relationship. 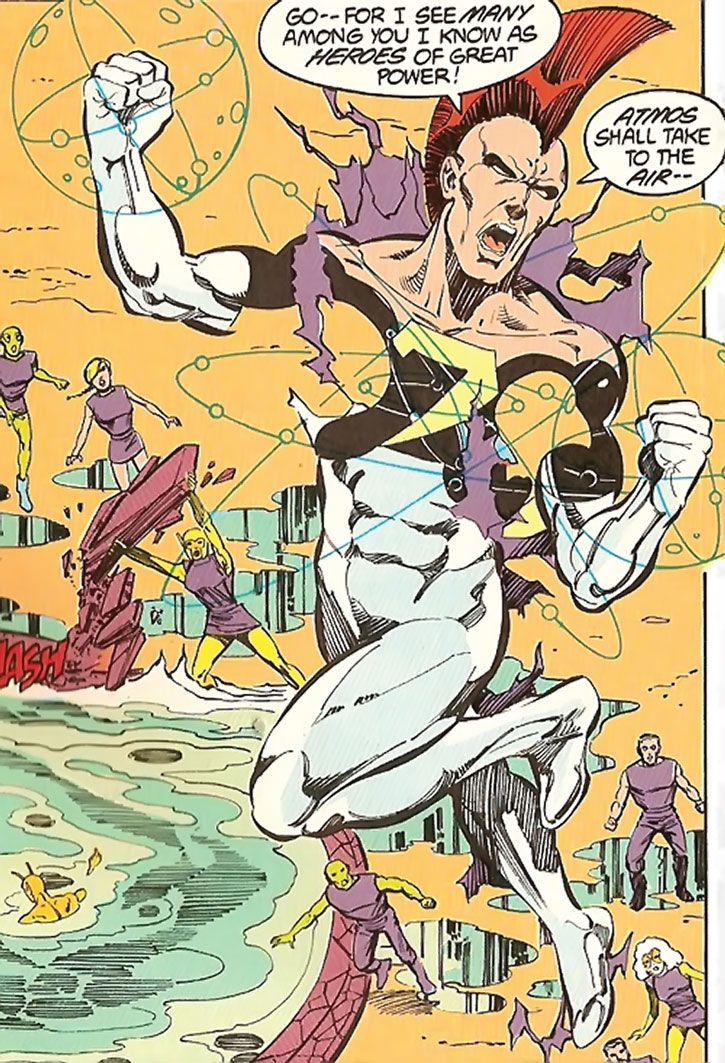 It should be noted that sources from the Dominion Empire do credit Atmos with having a quasi-hypnotic force of will. So it may be that he did hypnotize Dream Girl but did not do so intentionally – or at least, that he convinced the Legion that he had not.

Atmos joined during the time that the Dominion-influenced Earthgov was at odds with the Legion. He quickly tired of their mistreatment, so he resigned and volunteered to become an agent for Earthgov. He hoped this would give him the kind of prestige and luxury he’d enjoyed as Planetary Champion of Xanthu.

Instead, the Dominion took him prisoner and used him to test the capabilities of their android B.I.O.N., who quickly and efficiently killed Atmos.

Atmos is a large, intimidating figure of impressive physique. He has strange, pure-white eyes and red hair cut in a Mohawk.

While in costume he seems to have large chunks of his torso missing, which is not the case when he’s out of costume. Presumably this is a result of a special clothing that makes part of his torso invisible. Perhaps this is part of an attempt to disconcert opponents, or it may be a 30th century fashion statement.

Atmos is basically an honorable man, willing to fight evil and impressed by the LSH. But he is arrogant and expects to get his own way.

He can be very charismatic and persuasive, however. He is also able to be very intimidating and unnerving.

He is not a particularly smart fighter, often engaging in hand-to-hand combat when his nuclear bolts would be more effective. I doubt he’s completely useless or stupid, though. He did seem to respect the Legion. And in the story where he was first mentioned, when he was missing, Star Boy seems to respect his reputation.

Atmos has appeared in the post-boot universe as a member of Xanthu’s Uncanny Amazers. He doesn’t really look like this version of the character and seems younger, but he’s basically the same guy. Of course by now you know my feelings regarding the “necessity” for re-booting the 30th century.

In any case, I favor continuing the original storyline, but I don’t think I’d have had him join the Legion or get killed by B.I.O.N. Either:

I favor having Star Boy change his name to Star Man, and stay on Xanthu as Planetary Champion with Atmos a rival. Rather than having Star Boy ridiculously become a Batball coach on Naltor, he’d stay on his homeworld like the Tribune of Xanthu demanded.

Thus, in a universe where the Legion was disbanded, he would have become the coach and trainer of more home-grown Xanthian heroes. Such as:

Advantages:
Area Knowledge (Xanthu), Attractive, Expansive Headquarters (on Xanthu, since destroyed), Insta-Change, Local Hero (on Xanthu, may have lost this).

He only had a few appearances and some things are still unclear. Neutralize is from Who’s Who in the Legion but not demonstrated in the comics, so you may not want him to have it.

Some sources also claim Atmos has a hypnotic power, which is why Dream Girl had her affair with him. I doubt this is true. No solid evidence was given for it, and I figure that Dreamy was unconsciously looking for excuses to explain her poor judgement. She was in a funk at the time, and we all know that people can make bone-headed choices in partners, especially on the rebound…

If you decide he should have Hypnotism, then he changes a bit. Two options: