As a result of the genetic experiments performed on her before birth, Atom Eve possesses the ability to rearrange matter and change it into other forms of matter. She can create new atoms from their component parts and quickly arrange these into very large and highly complex living forms such as trees or transforming an arid desert into an irrigated oasis (she once did this with 10 acres of land).

Atom Eve can manifest objects formed from hard light energy, including the creation of shields capable of absorbing concussive impacts. She can also construct wall like partitions and barricades as well as shovels to scoop earth.

She can also fly herself and others by projecting solid light constructs beneath her and her passengers at speeds up to 130 mph.

Due to mental blocks placed in her mind along with her powers, Eve normally cannot use her matter alteration powers on living matter. In DC Heroes RPG terms this is the default for Matter Manipulation and Transmutation and thus not a Limitation.

These blocks will temporarily drop when she suffers significant trauma. After being fatally injured by Conquest, Atom Eve was able to use her powers to eliminate her wounds by rebuilding her body and then wounded Conquest in turn, vaporizing most of his epidermis.

These uses were still strenuous despite the lowering of the blocks and Atom Eve fell unconscious shortly thereafter. She also experienced a Power Complication Subplot in which subsequent uses of Matter Manipulation and Transmutation did not always have the exact desired effect.

The aforementioned mental blocks have not interfered with her efforts to make arid landscapes more fertile. She has been able to change the soil and create abundant plant life while rebuilding drought stricken areas in Africa without any unusual effort.

As the mental blocks were placed to prevent Eve from abusing her powers, these relatively passive, benign uses may not be enough to trigger the normal restriction against using her matter altering abilities.

Approximately 19 years ago an unethical government sponsored experiment to mutate an unborn child was carried out by Dr. Brandyworth. Unhappy about condemning a child to a lifetime of exploitation and testing, Brandyworth swapped the Wilkins family’s dead baby for the infant, and informed his superiors that the child died during birth.

Samantha Eve Wilkins had an instinctive understanding of chemistry and the molecular structure of things. Initially deemed a prodigy, she was briefly enrolled in a special school for gifted children, until it became clear she was not exceptional in other academic areas.

In her pre-teen years she discovered her ability to restructure matter, and used them to free experimental lab animals. Having been covertly monitoring her progress Brandyworth approached around this time to warn her to be more circumspect lest she draw unwanted government attention to herself.

When Eve was around 13, she was recruited into Robot’s Teen Team, adventuring under the name Atom Eve. By the time she was 17 she was dating her teammate Rex Splode, while attending Reginald Vel Johnson High School in her civilian identity.

Out patrolling one night, the Teen Team chanced upon a new hero who would prove pivotal in Eve’s life, Mark Grayson, a.k.a. Invincible, assisting him in capturing one of the Mauler Twins.

Mark turned out to share several of Eve’s classes at school. Though Eve swiftly made it clear she was involved after suspecting Mark was hitting on her, the two began hanging out together, sharing heroing tips and confronting their insane bomber physics teacher Mr. Hiles.

Shortly thereafter, following Robot’s decision to disband the Teen Team, Eve caught Rex cheating on her with their teammate Dupli-Kate. Distraught, she ran to Mark for consoling.

The pair began patrolling together more frequently, capturing the Lizard League together. Eve finally admitted to herself she was falling for Mark. But when she went to see Mark she witnessed him kissing his new girlfriend Amber Bennett.

Eve kept her feelings secret. She began dating Mark’s friend William Clockwell after he asked her out, but she found him childish, especially after he learned of her dual identity. Soon after graduation she dumped him, and informed Mark she was quitting superheroics. Her new goal was to put her matter rearranging powers to better use in less developed parts of the world.

They bid one another farewell. Mark told her he had always considered her his partner, and Eve nearly admitted her feelings before deciding against it.

Eve traveled to Africa, where she helped rebuild drought stricken areas and built herself a home. She briefly came out of retirement to help battle the extra-dimensional  Omnipotus the World Shaper.

After a while she invited Mark and Amber to visit her, though each woman found the other’s connection to Mark uncomfortable. After Mark had to race home when his mother was taken hostage, Eve flew Amber back to the States.

As a result of the battle, Mark was thrown into an alternate dimension. He was rescued by a future version of Eve and the Guardians of the Globe. To his surprise, the future Eve revealed her long outstanding love for him, and begged her to tell her young self how he felt, either way.

Mark spends some time apart from Eve, but then flies to Africa to see her after a disagreement with Amber. After a friendly hug and an awkward pause, they share a passionate kiss.

Immediately afterward, however, Mark apologizes and voices his guilt at going behind his girlfriend’s back. As a result, he is relieved to be called to fight off an alien invasion. Eve goes with Mark, but doesn’t want to discuss the kiss.

Eve remained incommunicado until she discovered that Rex Splode was badly injured. Upon visiting him, he revealed that Invincible broke up with his girlfriend. Eve immediately shows up at his dorm asking, “So — are we dating or what?”, but leaves without a word when he tells Eve about his encounter with her future self.

The romantic entanglement is finally resolved after Invincible returns from his encounter with Cecil Stedman. He and Eve reconcile and kiss.

Since she and Mark began dating, Atom Eve made further changes to her life. She resumed her superhero work on a part time basis, sometime patrolling with Invincible.

Eve also started the Invincible, Inc. on-call private security service, contracting with various penal and civil infrastructure facilities to be able to request Invincible’s assistance directly in an emergency. This service is hoped to provide them with enough money to afford their own residence together.

When Conquest arrived on Earth to test Invincible’s fitness as a Viltrumite, Atom Eve played a critical supporting role in Invincible’s victory despite the injuries she had recently suffered in Invincible War. Though she suffered even worse injuries battling Conquest, her recovery was much faster as the crisis helped her temporarily overcome her mental blocks on using her powers against organic targets.

Though she was able to completely heal herself physically in this manner her powers were slightly erratic afterward, though this side-effect seems to be tapering off.

She has also discovered that she is pregnant, though she has yet to tell Invincible. This pregnancy may also be a factor in the recent power complications Eve was experiencing.

Samantha is a typical comic book beauty. She is tall, with slender legs, an hourglass build, green eyes and long auburn hair. She is obviously considered attractive, having had no shortage of boyfriends during the series.

Samantha is smart, calm, dedicated and caring. She’s been a “professional” hero for many years, and as such displays an open confidence and competence in super-heroic situations.

She also tends to look at the bigger picture, and is constantly looking for more effective ways to use her impressive powers.

“I could feed the hungry — build houses for the homeless. I could improve people’s lives. College, homework, boys, superheroics — I’m wasting my potential here. I could do so much more.”

“It’s all atoms when you get down to it. I rearrange the atoms and some things turn into other things. It’s pretty simple… in a really complicated way.”

Atom Eve could be inserted wholesale into the DC Universe as is with little changes to her backstory. She could be romantically linked to any of the male members of the teen titans, preferably Superboy if he was still alive. 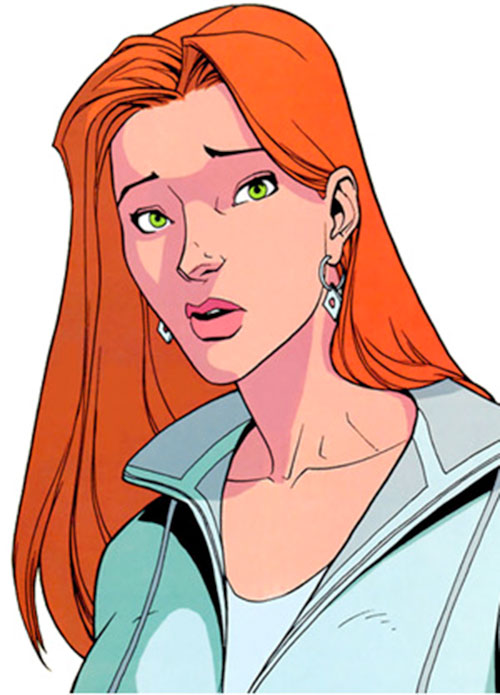 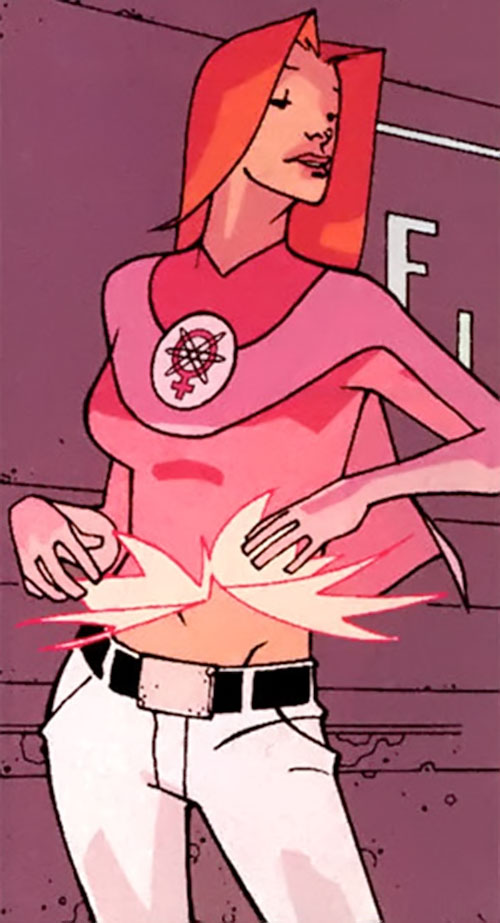 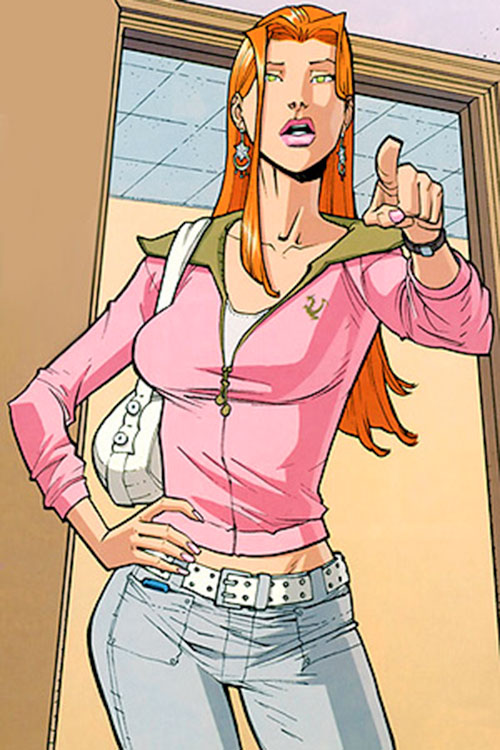 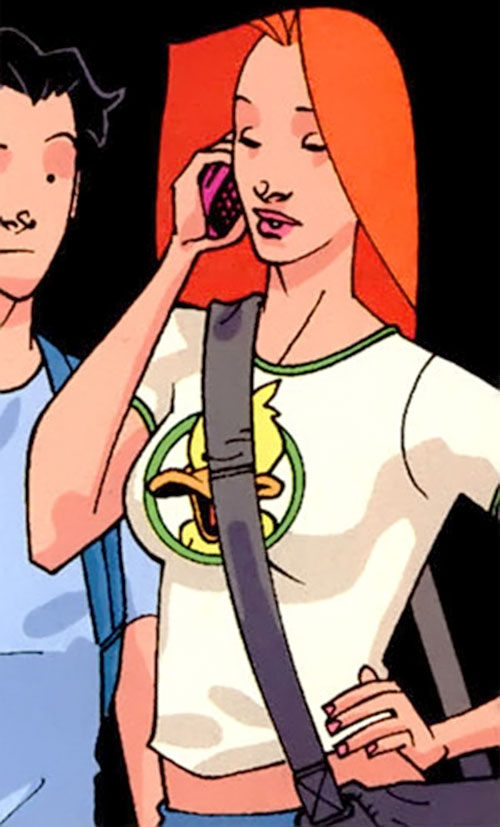 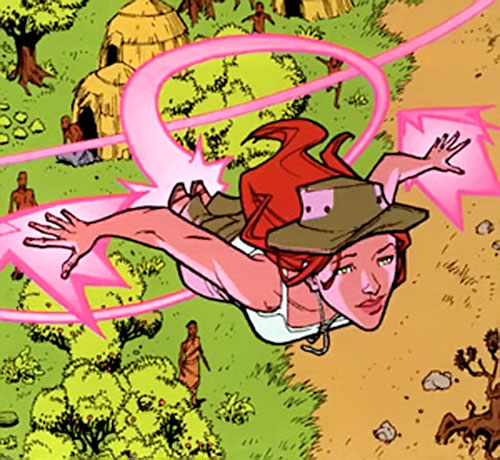