Atom-Smasher kept claiming he was made of pure energy. However, he seemed solid enough. It is unclear whether he still needed the various sorts of sustenance humans require.

He could project hard radiation, heat and concussive force (usually from his hands). He also can ignite his own body with a blazing aura of flame and radiation. He also was assisted by ordinary henchmen.

Atom-Smasher II seemed to be a bit more powerful than his brother, but was only ever seen projecting blasts from his hands.

Both Atom Smashers had fairly high Hero Points  totals for such minor villains. That allowed them to attack fiercely and to endure strong attacks for a while.

Both Atom-Smashers were served by henchmen armed with laser pistols. These men sported colourful uniforms :

Michael English’s henchmen also had access to three Robotrons. As they helpfully, explain, “They were designed to withstand the fury of a nuclear holocaust ! How can two super-heroes compare with them ? These head cannons can blast through 20 inches thick plates of titanium steel !”.

These humanoid mechas are about 5-6m tall, and are piloted from a cockpit that occupies the head. Three of the studs along their brow shoot yellow beams. And the double canons they have instead of hands shoot laser blasts. Apparently, the dual cannons replacing the hands can actually bend a bit, thus doubling as clumsy fingers. 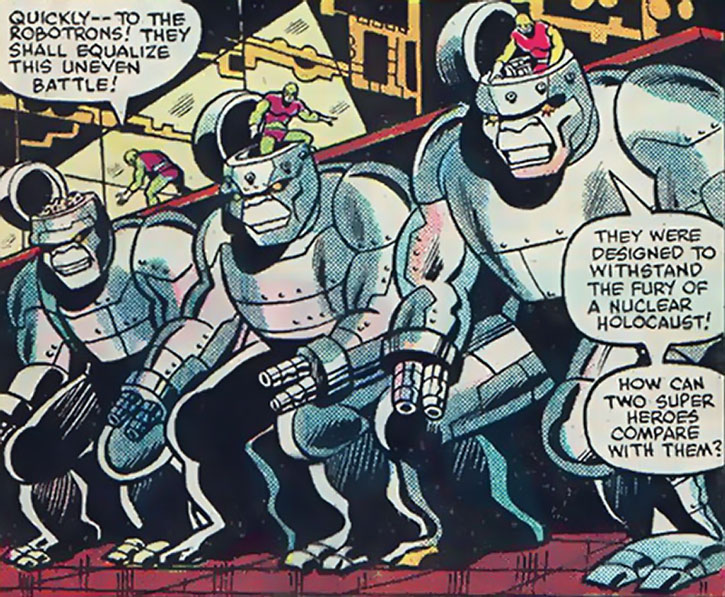 Ronald English and his brother Michael are the inventors of a technology called the Nucleonic Radiator. They developed it while Ronald was working for Cross Technological Enterprises (CTE). One of Ronald’s supervisors, a ruthless man named Connors, tried to cheat them both of their intellectual property. As a result, Ronald left CTE on very bad terms.

His brother Michael started suggesting monstrous strategies to derive wealth from the Radiator. One was wiping out a city to send a message and then blackmail the government. Although Ronald had little compulsion against killing on a smaller scale, he rejected this. As a consequence, his brother betrayed him. He contacted Connors to negotiate an arrangement.

Meanwhile Ronald, still angry at CTE and society in general, used the nucleonic technology to irradiate himself. He became the superhuman Atom-Smasher. Soon sinking into a life of crime, he recruited henchmen from the Taskmaster. Atom-Smasher then proceeded to raid scientific facilities to gather resources for his experiment. While attempting to steal a quantity of radium, he clashed with Black Goliath.

The inexperienced hero managed to stop him but not arrest him. Atom-Smasher’s rampage killed two policemen, destroyed millions in equipment and triggered a twelve alarms chemical fire threatening L.A.. More than 300 fire fighters had to be mobilised.

Undaunted, Atom-Smasher resumed his raids for his experiments. He clashed anew with Black Goliath. However, Connors, his former boss who was working with the treacherous Michael, had procured a superhuman killer of his own. The job was to take Atom-Smasher out.

At Connors’s order, the mercenary Warhawk opened fire from the shadows. He first creased Black Goliath’s skull, then murdered Atom-Smasher with a powerful sniper rifle.

Ronald English’s mutated body was eventually shipped to Project: PEGASUS for study. As for Black Goliath, exposure to Atom-Smasher’s energies resulted in a slow but severe case of radiation poisoning.

(The mystery of who killed the first Atom-Smasher (and why) remained unsolved for years. That Connors had hired Warhawk was stated much later, but brought closure to the teeming millions lamenting the premature end of Black Goliath’s own title.)

For years Michael, still in league with Connors, worked on reconstructing the nucleonic radiator. Their plan was to sell the device to dictatorships as a lethal ’crowd control‘ device. Michael also succeeded in rebuilding the device that had empowered his brother. Then he irradiated himself, becoming the new Atom Smasher.

He then started working on a new refinement called the Neutralode. It could tap his superhuman energies and convert them into something resembling a neutron bomb detonation. Coming back to his original plan, he decided to use the Neutralode to wipe out the population of a West Coast city, loot it, then blackmail the government with the threat of doing it again.

To complete the Neutralode, and much like his brothers years before, he began stealing high-tech components in the Los Angeles area.

Atom Smasher II first ran into the first Spider-Woman (Jessica Drew). She had been hired by insurance companies to investigate the thefts. English and his men left her for dead, but soon ran into the Thing during another theft. They barely managed to repulse him and take off.

Spider Woman and the Thing teamed up. They also invited the sick Black Goliath — now retired due to his illness, after a short career as the new Giant Man.

Spider-Woman, the Thing and the ailing Giant Man tracked down Atom Smasher II just as he was about to use the Neutralode. Despite a last-ditch effort by Giant Man, English managed to trigger the weapon of mass destruction. But it had been damaged by the battle and exploded. Its only victim was Atom-Smasher.

After the death of the new Atom Smasher, Spider-Woman agreed to perform a massive transfusion of her superhuman blood into Giant Man. She sacrificed her unique healing factor  to save his life from irradiation.

As for Connors of CTE, he continued to pitch the nucleonic technology abroad. He was eventually stopped by the Latin American hero El Aguila.

In their superhuman state, both brothers had an identical appearance.

Murderous mad scientists revelling in their lethal power, and with more than a touch of megalomania. They did not handle frustration or even mere opposition well, instantly responding with lethal force and significant (but tactically sound) Hero Points use.

As bad as Ronald was, Michael was even worse.

“You’re a dead man, Goliath — not even your giant-size will save you from a man who can transform his body into pure energy !”

“Rave on, fool ! Even you do not possess sufficient power to challenge… Atom-Smasher !”

“Powered by the atomic energy of own body, it will release a flood of deadly neutron rays into the nearby city ! Millions will die in seconds ! My men will be free to loot to their heart’s content !”

“Not just any bomb, you fools… I have created the ultimate doomsday weapon ! Behold my greatest achievement — the Neutralode !”

Since there are the words “green and purple” in this writeup, those guys would be pre-Crisis renegade Lexcorp employees.

Of course their nucleonic radiator would employ a Kryptonite fragment to power it. And their energies would have some level of Kryptonite radiation allowing them to have faced Superman.

There also would be ties to Reactron.

Bonuses and Limitations:
Energy Blast and Flame Project are both Contingent on Flame Being (-1).

Equipment:
Atom-Smasher and his men conducted their raids with some sort of high-technology airplane, which was only briefly seen. It might be somewhat comparable to a Quinjet.

Note:
May have other Powers (probably his brother’s Powers, with an additional AP) but that wasn’t demonstrated.

Equipment:
The second Atom-Smasher also had a hi-tech airplane, though it looked like a 1950s UFO.

The energy of both Atom-Smashers have the potential to trigger radiation poisoning, cancers and/or leukaemia. Or at least they did for characters with a human metabolism. For instance the Thing was not affected. But this might be because he was hit by a “mere” energy blasts, whereas Black Goliath was subjected to the more extensive Flame Being attack.

This effect is, in game terms, a Subplot, and is managed by the GM and the player as such.

Both Atom-Smashers had a cadre of henchmen (with street toughs stat, even though they were supposed to be highly-trained mercenaries), armed with laser pistols [BODY 03, Energy blast: 04, Ammo: 10].

The henchmen of Michael English had an uniform with a colour scheme identical to the classic Cobra costume (the Marvel villain, not the G.I. Joe bad guys), and they had the Vehicle and Weaponry Subskills to operate the Robotrons (below) — 3 APs in each.

Quickly – to the Robotrons ! They shall equalise this uneven battle ! 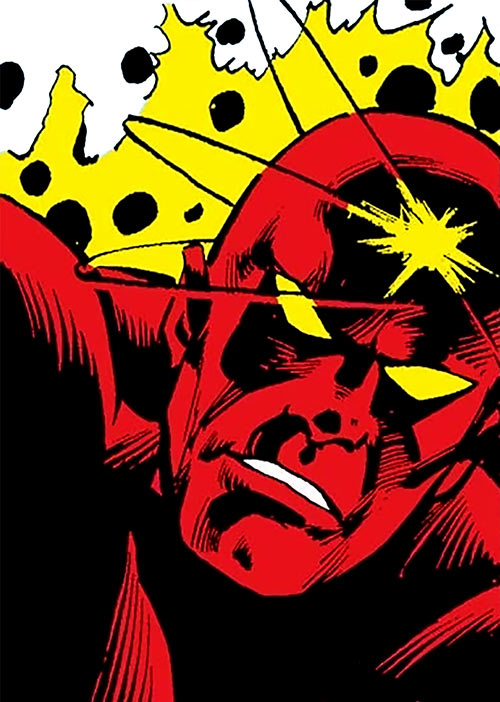 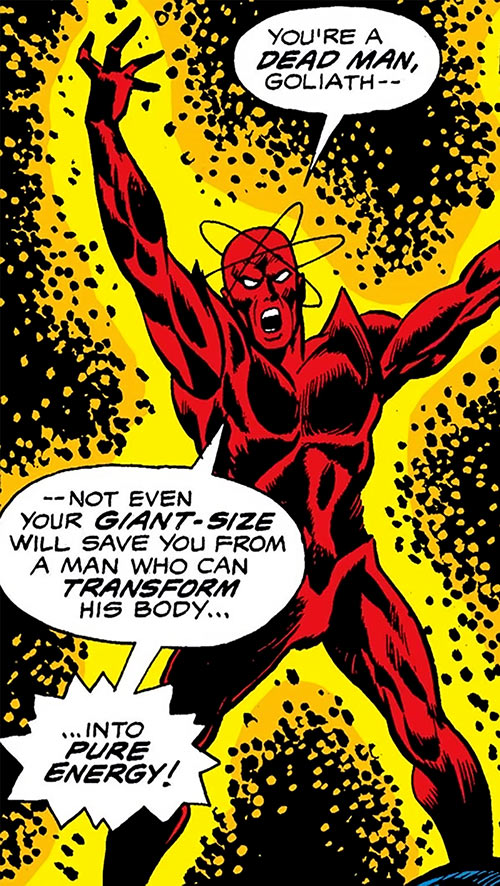 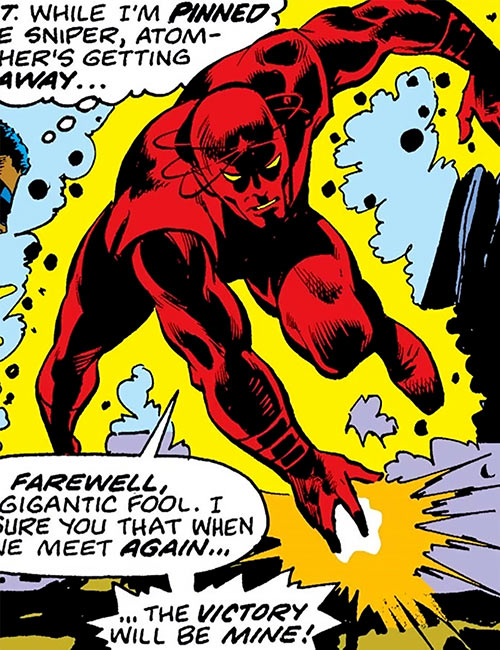 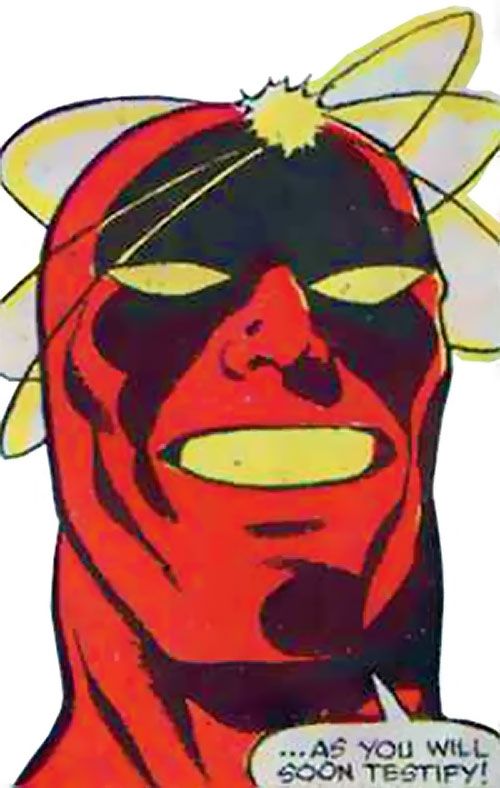 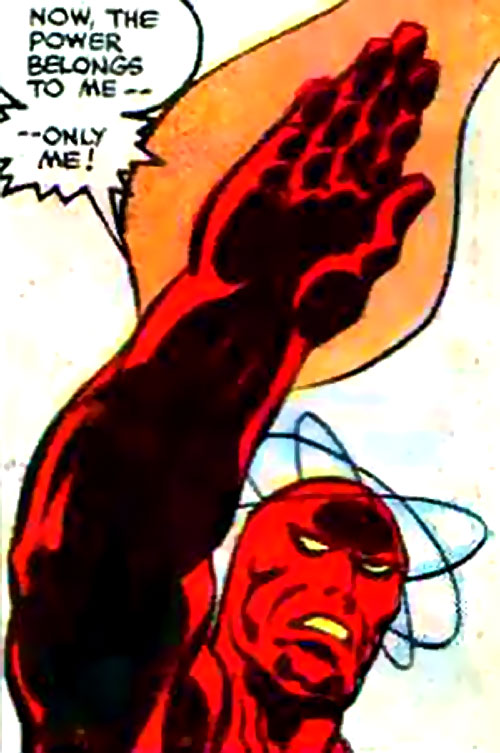 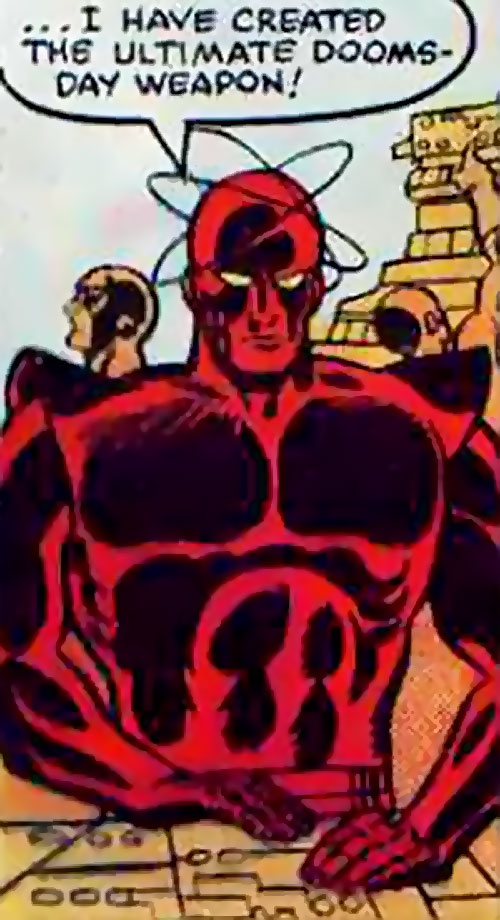