“He was a human cyclotron — a criminal who possessed the power to alter the atomic structure of anything he looked at ! Small wonder that even Batman and Robin seemed helpless before the menace of the Atomic Man !”

Atomic-Man only appeared in one 1960 issue of Detective Comics.

This was the early Silver AgeSuper-hero comics from the late 1950s to the early 1970s. To ride the unexpectedly successful super-hero revival, DC was making even Batman more sci-fi.

That was to match the themes of the new versions of the Flash, Green Lantern and the Atom.

Atomic-Man is entirely forgettable. But a very old profile by our contributor Sean MacDonald, about Flash foe the Tele-Villain, mentions him. So I thought it would be better if there was an article for that reference to link to.

Let’s see, what was big in 1960… oh right, Sam Cooke ! He was great. And this song fits the character to an extent.

He also seems to be in solid physical shape. But then with the art style, everyone is.

He’s accompanied by stock thugs. One is also a safecracker, and another knows how to operate motorboats. Their primary role is to run interference, since Atomic-Man lacks defensive capabilities. “Meat shields”, in video game parlance.

These thugs imply that Stroke acquired minor mob ties in prison. That’s the point of prisons.

His improbable invention directs electrical currents through a skullcap and hand grips. This charges his brain and eyes for two hours, enabling him to project eye beams that restructure matter.

The exact effects of the beam is determined by coloured lenses slotted into his goggles. These seem to be about 6″ (15cm) long metal tubes, with ROYG  lenses. So the Atomic-Man *literally* is a four-colourSomething goofy from over-the-top early comic books. villain.

It seems that Strobe twists the tubes to change which lenses are active. Each tube is set separately, allowing for combining colours.

This is done impossibly quickly. Most people don’t have time to react whilst Atomic-Man adjusts his lenses.

The default white lenses block the beams, though he can still see normally. This implies that the eyebeams are always on, as with Cyclops (Scott Summers), whilst he’s charged.

Windows into the atom

One would imagine that each of the four colours, plus each of the six combinations, has different effects. In the story, that’s… not apparent. What he does do is :

Strobe’s beams do not seem to affect living creatures. But that, in turn, makes it easier to do called shots against held or worn items. 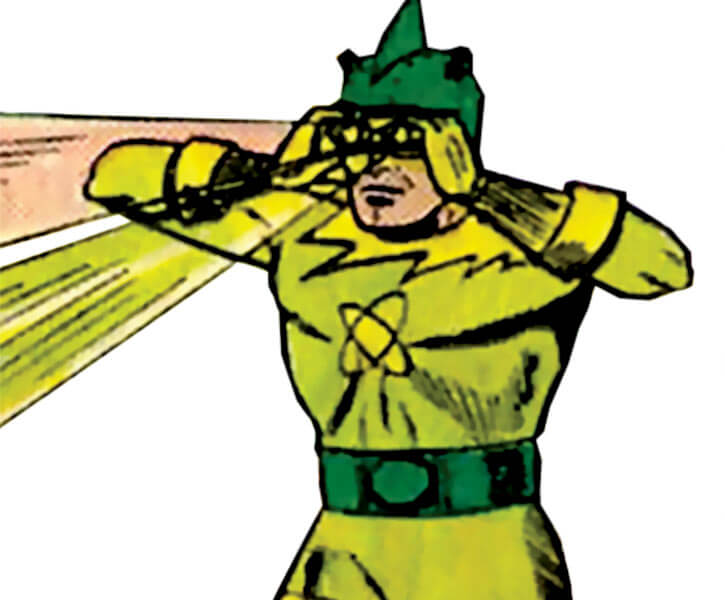 To finance these, he stole precious metals from the company he was running with three other Gotham men.

In 1954, Batman (Bruce Wayne) arrested Strobe as he was selling metals to the underworld. During the trial, Strobe’s three ex-partners (Hayes, Barker and Jenkins) plus Batman testified against him.

As he was sentenced to prison, Strobe publicly swore revenge against the four of them.

All day long they work so hard

In 1959, Strobe was released. He resumed obsessively working on his experiment, and was soon successful.

But even with wondrous atomic powers of matter reconstruction, all he could think of was his petty vengeance.

His three ex-partners had moved on to found their individual businesses. Accompanied by three goons, the newly-minted Atomic-Man raided these in turn. He smashed and/or stole everything, in order to financially ruin them.

(It is possible that the mob was in on this. As it created an opportunity for them to shark loans to the three distressed entrepreneurs.)

During one attack, Batman was almost killed. He was aboard an under-construction ocean liner that Atomic-Man sent into the stratosphere. However, Robin (Richard Grayson) narrowly saved Batman using a whirly-bat.

Just before Batman arrested him, Atomic-Man thought he had his revenge. He had turned Batman’s cowl transparent to reveal his identity to the world.

But after seeing the Batmobile turned to glass, Batman had been expecting this. He had disguised his features under his cowl.

Atomic-Man was never seen again. Perhaps his super-experiment had fatal side effects. 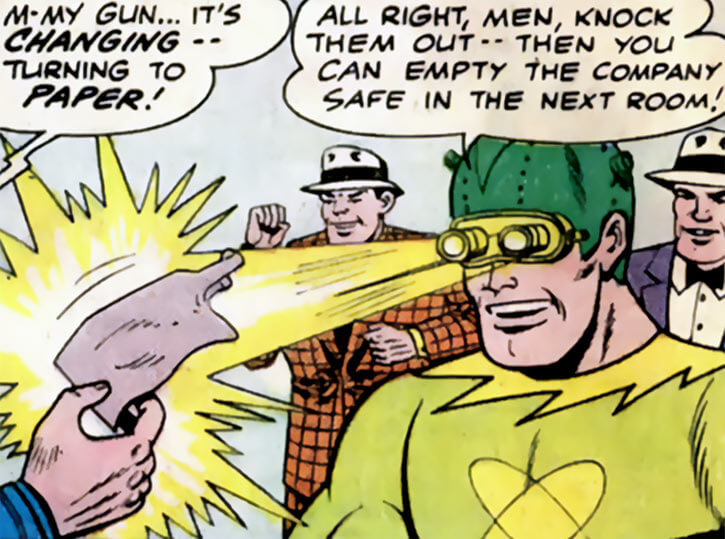 A petty and vengeful man. He was obsessed by his experiment and took huge risks to conduct it.

Yet once he was given great power, he behaved like a puerile bully. He was only concerned by avenging slights to his ego.

“Yes, Batman — we’ve seen your face ! When I describe it to the world, your secret identity will be out, and your career will be ended… ha ha !”

One suspects that his invention had unrevealed ties with Crazy Quilt’s work.

And that it was a critical part of the work of the Rainbow Raider (Roy G. Bivolo)’s father. 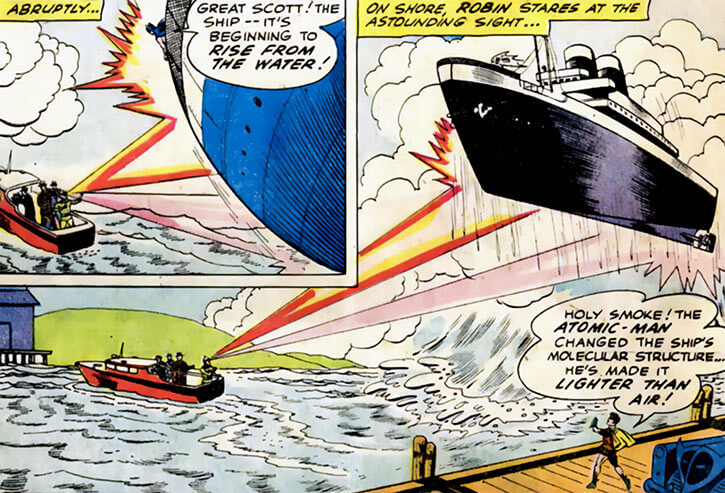 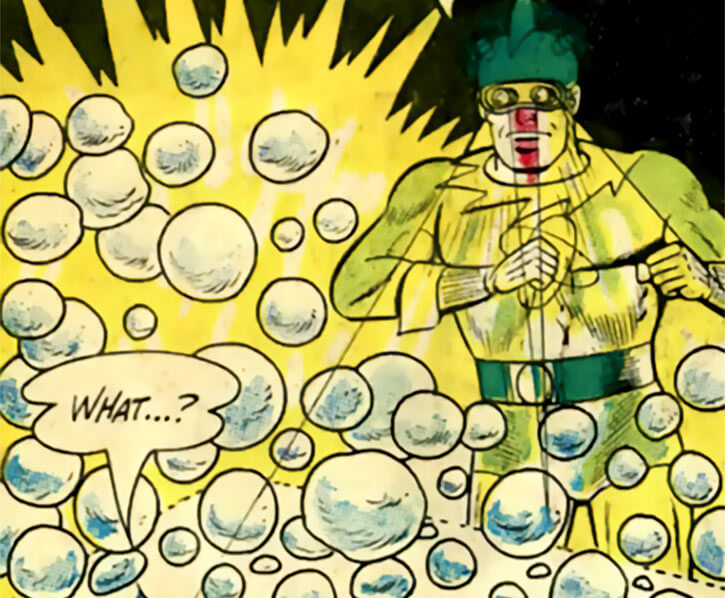 This here is an example of writeups.org evidence-based modelisation.

The way his power is described strongly implies Transmutation, Matter Manipulation and the like.

But we don’t pay much attention to what we’re told. We’re totally, like, rebels. Rather, we focus on what we can *observe*, and what the power exactly *does*. And that leads to entirely different conclusions.

For instance, he seems to turn a safe to glass to see its content. But the thug with him then proceeds to open the safe normally rather than smash the glass and grab the moolah.

This strongly implies Atomic-Man changed the colour, but not the tensile strength of the steel alloy. It’s not Transmutation.

Ditto for the “sure, there are fancy visuals, but what’s the *functional* result ?” approach. Which you can also see in, say, the Scarlet Witch (Wanda Maximoff) (Earliest) profile or the Armour (Ichiki Hisako) one.

I still added a few Transmutation APs as a backstop, to acknowledge the description of his powers. But they’re low and in practice, he’s better off using the Powers he did use in the story.

This profile is also a clear example of writeups.org Attributes convention being used rather than Mayfair ones.

The Attributes thus correspond to what he’s seen doing, which is very little. His goons are more physically adept than he is, for Aunt Petunia’s sake !

Whereas in the Mayfair style, he would have all 03s and 04s and at least 020 Hero Points (based in Crazy Quilt’s stats in the Batman Sourcebook).