Atomicus is power incarnate. Some call him perfect – bright, heroic and powerful. A paragon of the Atomic Age, he can :

He has given Irene Merryweather an earring that can send him a distress signal, or call him in to stop criminals.

In 1961, a humanoid being spontaneously appeared during atomic experiments in a lab near Astro City. He defeated the KGB agents attempting to kidnap the defector Dr. Vasily Petrov. Then he became a super-hero — whom the press dubbed “Atomicus”.

Nobody ever quite determined what Atomicus was. But he could speak English and had some basic understanding of the world. He defended Astro City against innumerable and oft-goofy Silver Age menaces. Atomicus became very popular in Astro City and beyond.

Atomicus was closely associated with a Mayoral aide called Irene Merryweather – the Lois Lane to his Superman. After he saved her from the Balloon Bandits, they dated for several years. She was his partner, investigating ahead to help him crack his cases.

Atomicus created a secret identity as “Adam Peterson”. Then he joined the Mayoral staff so he could be close to Irene. Ms. Merryweather soon suspected that Atomicus and Peterson were one and the same. But he repeatedly foiled her Silver Age attempts to expose him as Atomicus, sometimes in cruel and humiliating ways.

When she ended the “game” and angrily confronted him the furious Atomicus left the Earth, never to return.

Several space-faring super-heroes have since confirmed that Atomicus was still active, albeit in outer space.

Atomicus looks like a Greek god for the Atomic Age. His costume is black and covers everything but his head and arms. His arms are covered by three pairs of metal arm bands and he wears another band around his forehead. His chest is covered by a metal nucleus with three rings (electron shells) that reach his backside.

His large blue cloak is held in place by the rings. His hair is burning brightly while he is using his powers and his whole body is glowing strongly. Enlargened atoms or symbols thereof seem to surround him in the air at times. Most impressive !

In his secret identity he gives a soft, almost non-threatening impression. He carries the Atomicus costume underneath his clothes, but in a different form, flatter and simplified. He transforms it into the regular costume through some application of his powers. The transformation also turns his hair white.

Atomicus has known ever since his first moment of being aware that his existence is about improving life, to serve humanity and to serve America. He is the epitome of ”better living through Atomic power“. Atomicus seems to literately have been made to be a hero. 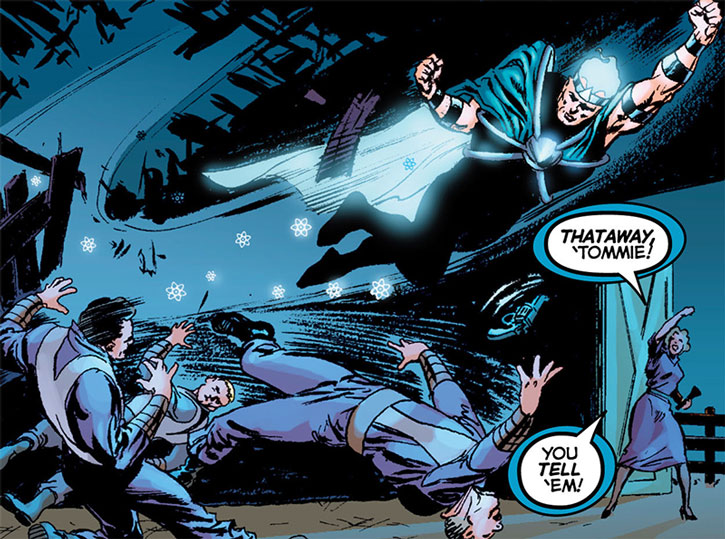 He selflessly helps out to protect the innocent and to make Astro City a better place. No threat would be too great to combat and he would show up anywhere in the world where he was needed.

Atomicus is a soft, kind and very likeable character. He feels like and is a new-born alien on Earth. He grows each day, learning more and more about human life, which he cannot fully comprehend. He tries to learn to become a man by playing at being one in his secret identity.

No, you don’t understand !

It would look like a social game to outsiders, but it’s all very real to him. For this purpose he created the identity of Adam Peterson, which is probably composed of the words atom and the son of Petrov. He will hold long, friendly dialogues to learn about life.

He was very aware that Irene Merryweather knew about him as Peterson really being Atomicus. Yet he did his best to dissuade her from trying to prove it, and gave her several lessons to get her off his back. He just wanted to be a human. However, Atomicus couldn’t tell the difference between clever and cruel.

In several ways he is like a child, but tries his best to be a grown-up. He tried very hard at becoming a human. When his cover was finally blown he became angry and upset enough to leave Earth forever.

“There is a sign near where I came aware. ‘Better living through Atomic power’, it says. And that’s what I feel. My power was intended to improve life. To serve humanity, serve America. So that is what I do.”

“Hi, folks ! Good thing I got back from Red China early, and checked in on Irene’s earring-signal, eh ?”

[His secret identity is revealed] “Stop ! I am so tired of this ! You think this was a game, Irene ?! You think I was playing ? I tried to tell you — to tell you that if there was ever going to be someone, it was going to be you ! Only you ! I loved you ! And I came here to be near you — to see you every day while I learned to be human — while I learned to be a man ! I just wanted to learn — wanted to be what you deserved. But you wouldn’t stop — I tried to get you to stop — but you kept coming at me — and I couldn’t — didn’t — and do you know what ? If this is humanity, I don’t want it. I don’t want any of it !” [leaves Earth forever]

One possibility is that he was active during the Cold War, after McCarthyism  drove the JSA into retirement and before the Justice League formed. About the time Captain Atom was first published, in fact. His exploits then could happen more or less unchanged. His origin could be scientific, as an elemental or several other things, as presented below.

When the military introduced Captain Atom to the world with a fictional backstory including fictional heroics, they might have credited some of Atomicus’s actual accomplishments to Captain Atom. The military might pretend there is some link between Atomicus and Captain Atom, to enhance the Captain’s prestige.

Taking this to the extreme, they might even try to claim that Captain Atom *is* Atomicus. The great hero of the past returned with a new identity for a new era. The eventual meeting of Captain Atom and Atomicus would almost certainly be explosive.

Of course, Dr. Megala, General Eiling, and others involved with the Captain Atom project would be most interested in the unexplained creation of Atomicus. If they were not involved in Atomicus’s origin, then they would certainly wish to study him. The project that created the Will Payton Starman might also be inspired by Atomicus in one way or another.

Drawing on the theory that Atomicus might be an ancient spirit reborn into the present through science, it’s hard not to suggest a link between Atomicus and Uncle Sam. Perhaps Atomicus is even a transformed Uncle Sam. Alternatively, since Firestorm is a fire elemental perhaps Atomicus could be exactly the same thing. Or even a quantum/atomic elemental.

Drawing on ideas from the gestalt  identity of Firestorm, Atomicus could be the fusion of the idealistic scientist Adam Petrov and the KGB spy who went to kill him. However, he would be unaware of this. Atomicus could later have flown to Russia, where he became a hero in the Nikita Khrushchev era (perhaps as the first Pozhar).

Alternatively, instead using a scientific origin, Atomicus could be a physical incarnation of the same cosmic energy that was used by Ted Knight’s (Starman I) weapons.

He became the Starman of the 50s in Opal City before his galactic odyssey. After the Cuban missiles crisis and the end of the Khrushchev era, he left for outer space. In space Atomicus, perhaps amnesiac, could have become Prince Gavy of Throneworld. And then he became merged with Will Payton as told in the Starman (Jack Knight) comics.

Another possible use of Atomicus is to use him as the inspiration for a non-U.S., possibly even alien hero. If Atomicus were a Cold War era Soviet hero, for example, a counterweight to Superman and the JLA, it would explain why a heavy-hitter of his ability has not had more effect on the DCU – at least, not in the West, where most known heroes have operated.

(Likewise, I use other Astro City heroes to populate countries that, in the DCU, are overly lacking in superheroes.)

If Atomicus now operates in space, as in his Astro City History, he could encounter any of DC’s spacefaring characters – L.E.G.I.O.N., Star Man, the Omega Men, the Green Lantern Corps, etc.

Finally, Atomicus might be an alien hero in the future, during the Legion of Super-Heroes era. Since Atomicus is near-immortal, you could make him a survivor of the 20th century, with any of the backstories suggested above. Alternately, he could have been born in the 30th century instead.

His abilities would make him a formidable planetary champion, with powers that would naturally counter the LSH’s Element Lad.

If his matter manipulation can make kryptonite, or target Mon-El’s anti-lead serum, his presence in the 31st century could have a major impact. One possible scenario is that Atomicus is from Xanthu, Star Boy’s homeworld. If Atomicus is native to the future, Xanthu might be his home. If he’s from the past, then he encounters Xanthu in his wandering through space.

He might have encountered and decided to accompany the first colonists en route to Xanthu, and be a legend there. Perhaps he’s even a prisoner, unknown to any (especially Star Boy or the Legion), the subject of study by Xanthuan scientists.

Xanthu has always placed a premium on having a planetary champion (in the post-Zero Hour reality Xanthu has its own superhero team, the Uncanny Amazers), and has freely used technology to create or enhance those champions.

Interestingly, several of them have atomic-energy based powers – Atmos, Atom’x, and arguably Kid Quantum I and II, if you keep the link with Captain Atom who was powered by the Quantum Field. Radion later joined the Uncanny Amazers as well.

Even Monstress might ultimately be linked in, if her (originally) green skin indicates empowerment by gamma  rays.

Perhaps Xanthu derived the knowledge to create Atmos and the others through study of Atomicus – willing or otherwise. Atomicus could be a prisoner, unknown to Star Boy or the Legion, or he could be their ultimate Plantary Champion. Either way, he’d be used to empower potentially dozens of atomic-powered agents for Xanthu.

His Powers are mostly guesswork, although most of it has been demonstrated, and he could arguably be much more powerful than this. 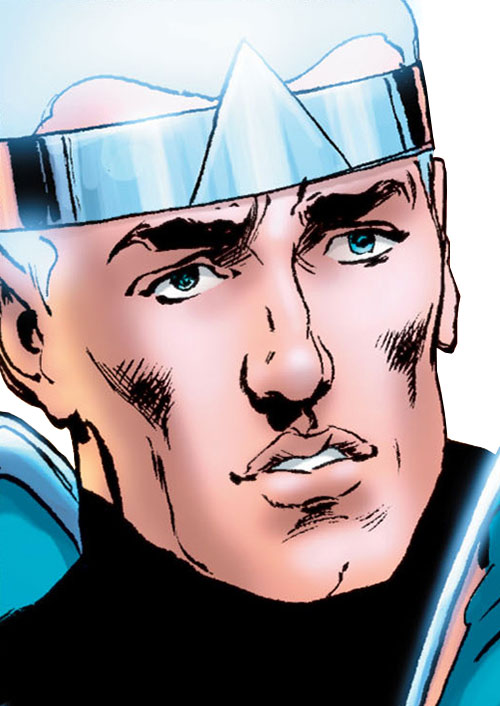 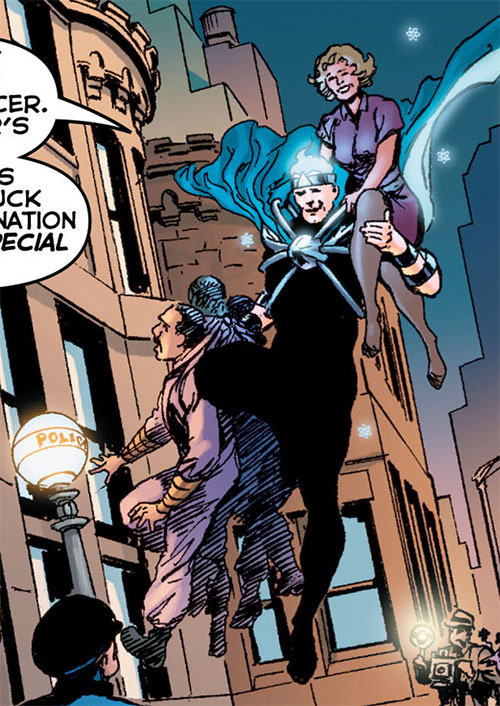 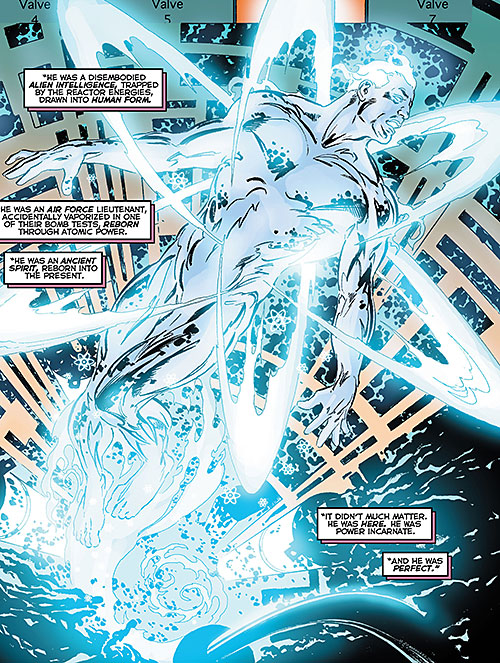