The series (by Kate Leth (writage)  and Brittney Williams (drawage)  ) was cute, funny, fresh, several shades of queer, and heartfelt. *And* it held for 17 issues.

In the comics her code name is spelled with the proper diacritic  . But in this entry I’ll write it “Attache” a few times for those doing searches with diacritics-challenged keyboards. Just to be sure.

Attaché could be an amusing Player CharacterRPG characters played by a player, rather than the gamemaster or the computer. in a low-powered campaign.

Bailey is in good shape, and seems to have a bit of athletic and brawling experience. Nothing notable, but she’s not a couch potato.

She also has a certain physical courage. But it stems from overconfidence.

It is vaguely possible that she is/was a law student. 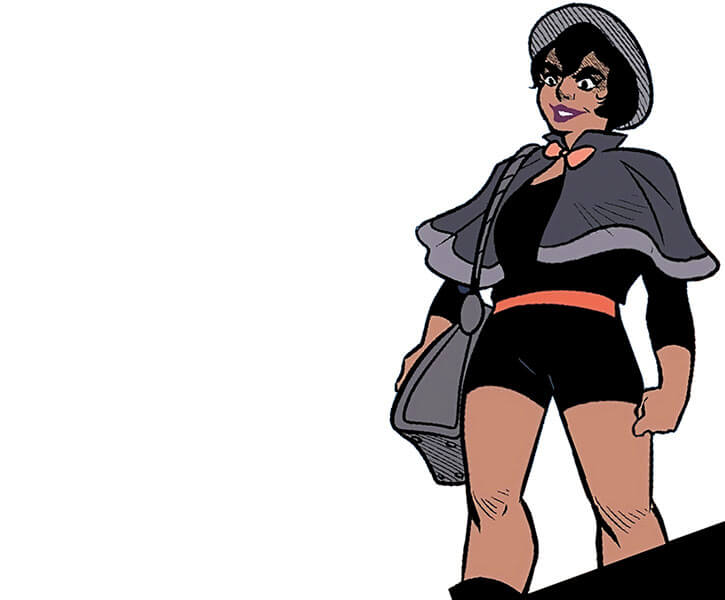 The purse with the curse

Her asset is that she has a magic bag. She said that she “always” had it.

There’s a large dimensionOther realms of existence that are not our universe. within the bag, so her storage space is essentially infinite. Attache can :

Since Bailey didn’t pay off her student debts by Ebaying stuff from her bag, the objects likely vanish after a while.

(Another heroine with the power of having a purse is Honey Lemon).

The dimension within the bag has breathable air and mild temperature, but little light.

There’s a 1G gravity, but it doesn’t quite behave like Earth’s. Unattended objects kinda just float, though they tend to form clusters. People can stand as if there were a floor.

The bag holds vast amounts of stuff. She can put outside objects in it (such as her smartphone, or a captured person), but it apparently came “preloaded” with every object she might think of. What was demonstrated :

There was no visible combat equipment, such as weapons or armour.

Attache said she had something that could be used as a weapon, but what it is is unrevealed. My bet would be a baseball bat, or some such dual-use item.

Later on she mentioned a katana. Later still she produced and used a high-concentration mace spray.

Being in the bag will overwhelm ordinary folks. But more collected persons will be able to find some sort of illumination, then organise using the objects at hand.

It is possible to use the floating objects to climb up toward the top of the bag dimension – though it is a long climb. People who do that will be able to leap out of the bag the next time Attache opens it.

Bailey stated that “there’s some pretty weird and mystical junk in it”, and that the bag dimension might have inimical properties. She only enters it to teleport, and then only for a second.

The “tentacle artefact”, wot’s easier to show than to explain.

Bailey was among the early hires of Casiolena, a witch who had been recently exiled to Earth.

Casiolena was recruiting young minor superhumans. In Bailey’s case, she promised to rid her of her student debts  .

Bailey was the one with the most initiative and presence.

Bailey first ran into Hellcat (Patsy Walker) while shoplifting at the mall. One had to commit a crime to join Casiolena’s “mob”, and that’s what came to Bailey’s mind.

Patsy spotted her stealing a crop top (which didn’t look that great, honestly) then platform boots (now the boots were cool). Though Bailey felt strong and confident, she was quickly forced to retreat.

She foolishly volunteered to capture Hellcat for Casiolena, acting as if she were a real super-villain. Yet Hellcat defeated Bailey by conking her on the head but once.

When the Valkyrie (Brunnhilde) came in, Bailey was frightened by the sword pointed at her face. She thus told them where to find Casiolena.

During the subsequent battle, Bailey realised that Casiolena was evil, and a liar. She quit.

In typical Patsy Walker fashion, Hellcat then befriended Bailey and offered her a position with her new project – a temp agency for people with powers. She-Hulk (Jennifer Walters) then pitched in, returning the stolen boots and convincing the store to drop the matter.

(Bailey kept the top, though. But then, what’s a generic crop top worth these days.)

Don’t be a bag just be a queen

Patsy sold Bailey’s services as a mover. Bailey could put an entire company’s stuff in her bag, ride the subway, then take everything out of her bag at the new site.

However, she became interested in helping Hellcat in a more super-heroic capacity. Hellcat and her aide Jubilee (Jubilation Lee) put her through a quick martial arts drill.

This is what finally led Bailey to realise that maaayyybe she wasn’t actually a tough girl.

She also decided to go by “Attaché”.

The cat’s out of the bag

However, Attache was soon captured by Black Cat (Felicia Hardy). Hardy then turned her into an obedient servant using magic claws. Bailey thus briefly was a member of the Black Cats girls gang.

Attaché later helped Hellcat and some allies (including Ms. America Chavez) fight Mister Sniffles, an embodiment of Patsy Walker’s fears. This creature was defeated when Patsy argued that with the state of US politics in 2016/2017 being afraid was entirely reasonable. Which Mister Sniffles could only agree with.

Attache hasn’t been seen since. 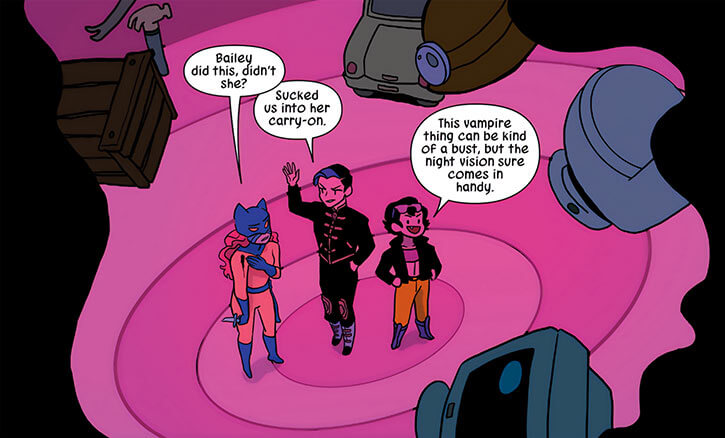 Hellcat, Telekinian and Jubilee within the bag dimension.

While working for Cassiolena, she was gussied up. Black rompers and booties, grey fedora (it’s okay, she’s a girl), dark grey opera cloak, pink belt and bowtie (to fasten the cloak).

She generally has a good fashion sense (in a casual-but-hipster-ish 2010s Brooklyn way). And of course she has infinite wardrobe space.

She’s usually drawn with olive skin and purple eyes, but sometimes she has a lighter skin tone and brown eyes. Maybe there are magic cosmetics in her bag ?

A perky young woman who wishes to be cool and impressive and to matter, but doesn’t really have an idea of how to achieve that. She could certainly benefit from some guidance. So it’s a good thing she met Hellcat heh ?

She enjoyed hanging out with Patsy’s friends, and is presumably still socialising with them.

Early on she assumed that the ability to produce mostly mundane objects made her really tough. She now seems to have a more realistic assessment of her “power”, but remains overconfident. 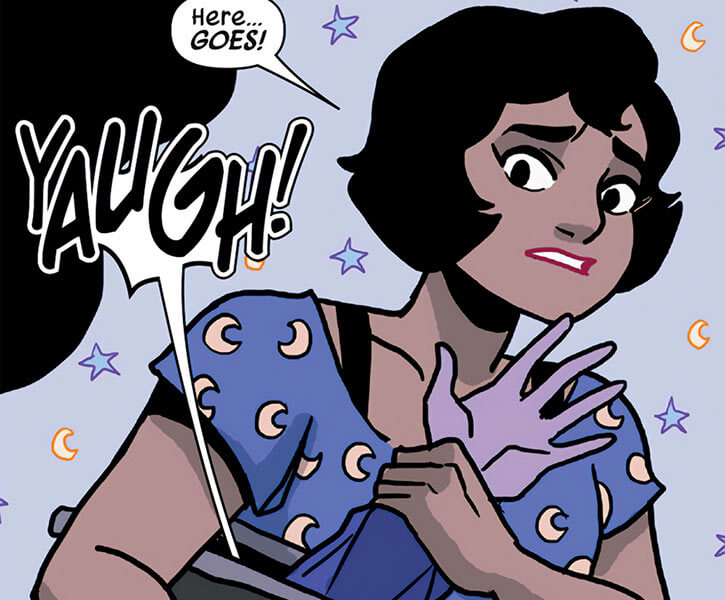 Martial Artist only works when she has a/ her bag and b/ her full confidence.

This would be a great opportunity to develop the Macro version of Dimension Travel (Tesseract Only), but I have no time for that.

The Familiarity is based on all of one off-the-cuff remark, so it’s on unusually shaky ground.