Auron is the most legendary Guardian in his world. He is the only known Guardian to have survived the final battle with Sin in the entire history of Spira. Auron is a master swordsman whose techniques are able to inflict all sorts of negative effects on opponents other than the initial damage.

Auron is also steadfast and fiercely determined. Once he sets his mind to something there is nothing that can stop him. He was able to crawl down a very dangerous mountain on the verge of death. He did not hesitate to confront the very gods of his universe to right a grave injustice.

Aside from that Auron is also highly intelligent and patient. He is able to come up with complex plans capable of changing the world. Through his many adventures he has seen far too much and is possesses knowledge that was able to shake the very foundation of his world.

Auron is a large intimidating man. He is very clearly depicted as a ronin (masterless samurai). Such ronin characteristics include carrying his sword on his back (true samurai always carry their sword at their side), or carrying a sake (Japanese rice wine) jug.

Most importantly, Auron does not put his arm through his left sleeve. He carries it like it’s in a sling. Ronin are said to advertise their occupation/status this way. It is said that they only remove their left arm when it is time to fight.

Aside from that he wears a fancy red overcoat with plenty of buckles, black boots (also with lots of buckles), loose fitting pants, and a black form fitting shirt underneath. He typically wears the overcoat closed with his left arm resting just above the belt. He wears a black leather glove on his right hand and black sunglasses that partially hide the scar over his left eye.

Auron is a tough old man who has seen way too much. He is grizzled, but wise. He often offers pearls of wisdom to the younger members of the group – whether they want to hear it or not ! Despite all this Auron has a very noble sense of justice and isn’t afraid to challenge the gods to make things right.

His manner of speaking is neither rude nor formal. He is merely straight realistic and to the point. Howbeit, he can be tactful on occasion and he will once in a while show his distaste for certain members of the Yevon clergy.

His most annoying trait is that he always seems to know way more about what’s always going on. Yet he doesn’t always feel inclined to share this knowledge.

Although he is always quite smug about being ten steps ahead of everyone he does this for a reason. Auron knows all too well that too much knowledge can be a dangerous thing regardless of whether or not it’s in the right or wrong hands.

Auron: “What are you taking ?”
Jecht: “Well, you said it was gonna be a long trip. We’ll be seeing a lot of neat things, right ? So I thought I’d record it all in this. To show to my wife and kid, you know.”
Auron: “This is no pleasure cruise !”

Jecht: “What are you shooting me for ?”
Auron: “So you don’t do anything stupid again. I can’t believe you attacked that shoopuf. Lord Braska had to pay the handler for damages from his own travel money.”
(pause)
Jecht: “That’s it. Only thing I drink from now on is shoopuf milk !”

Rin: “Sir Auron ! I wonder if you remember me ? Ten years ago ? At the beginning of Lord Braska’s calm ?”
Auron: “Yes. I should thank you.”
Rin: “Not at all ! I could not leave a wounded man to die. However, I was surprised to see you gone the next morning, with that wound. An ordinary man would not have been able to walk.”
Auron: “I’d rather you just drop the subject.”
Rin: “As you wish.”

Auron: “Somehow I made my way, crawling, down Mount Gagazet. But my strength left me just outside Bevelle. That’s where Kimahri found me. I told him about Yuna… just before I died.”
Tidus: “Auron…”
Auron: “Don’t make that face. Being dead has its advantages. I was able to ride Sin and go to your Zanarkand.”

“Outside the dream world, life can be harsh, even cruel. But it is life. Jecht wanted you to have a shot at life. I saw it in Sin’s eyes. That’s why I brought you here, to Spira.”

“Once this is over, I will leave. I have played at life for too long.”

“This is your world now.”

Auron could be used in two different ways. If the plot involves the characters going to another FF style dimension then he could act as a guide of sorts and help the characters to accomplish their goal. He would be the perfect NPC for keeping the players on track, but not revealing too much.

The alternative is that he could be stranded in the DCU on some sort of quest for something involving what is going on in his world. Depending on how complex you want to make it the effects on the DCU may or may have a huge impact.

Bushido Techniques (that much be fueled by Adrenaline Surge):

The way of the warrior 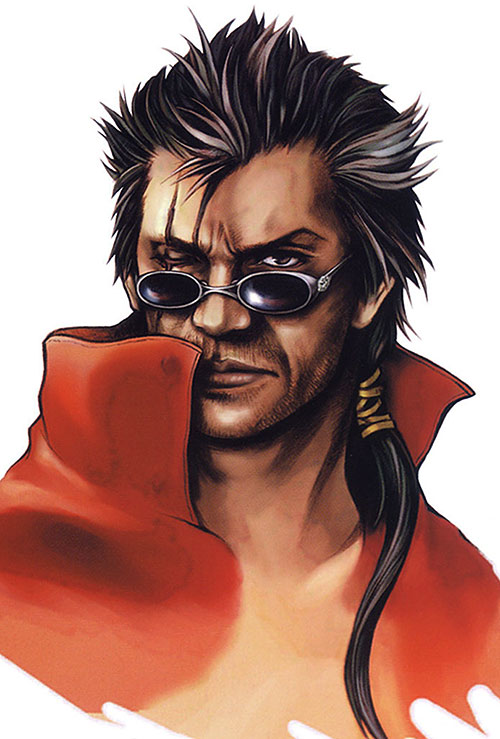 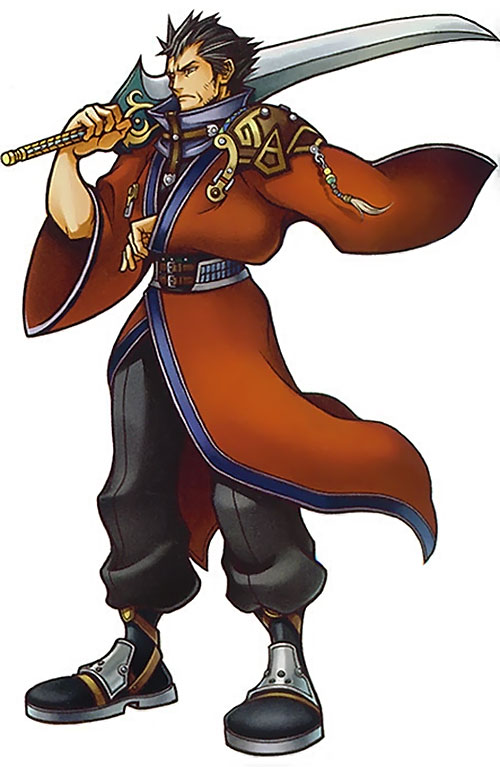