In addition to his clone-progenitor Guardian’s fighting prowess, Auron had “Class 85” strength. Furthermore, indestructible alloys were molecularly integrated into his skin. He could shatter two-foot-thick steel doors with a single blow and survive multiple blows from opponents capable of going toe-to-toe with Superman.

The jet-pak built into Auron’s back allowed him to fly at speeds sufficient for interstellar travel (Flight). It also included an on-board computer storing extensive amounts of information, including Superman’s DNA code. It was supposed to allow Project Cadmus to reprogram his personality (Hypnosis), but Auron quickly learned to override this function (Iron Will).

Being powered by solar energy, Auron did not need to eat, breathe, or sleep (Life Support). It is unknown how long his power reserves would last in total darkness. But it took very little light to sustain Auron’s functions. He spent an unknown amount of time in deep space exposed to nothing but dim starlight without suffering diminished capacity.

Auron was one of Project Cadmus Director Westfield’s attempts to create a supersoldier using the DNA of Jim Harper, a.k.a. Guardian, in tandem with cybernetic enhancements. Auron’s brain was connected to a computer that would theoretically allow his users to reprogram his personality. The goal was to avoid the moral qualms and independence sometimes evinced by Guardian.

Shortly after Superman’s death, while his body was temporarily taken into Cadmus’s custody, Auron was activated. Director Westfield ordered Auron to seize a computer disc programmed with Superman’s genetic profile.

Howbeit, encounters with Guardian and the Newsboy Legion awakened parts of Jim Harper’s mind within Auron. After Auron stored the information on Superman’s DNA in his on-board computer, he destroyed the disc. He then left for outer space.

Months later, Auron encountered the interstellar plunderer Massacre. The brute had just destroyed a Virago vessel and killed the crew. Auron sought to stop Massacre, but could not withstand hiss superior strength and durability.

Superman, having been reborn since Auron left Earth, came across the scene and joined the revived Auron in pursuing Massacre. But Auron was still suffering injuries from the first battle. As a consequence, he died at Massacre’s hands before the pillaging thug fled the scene.

Auron’s made a final request for Superman destroy his body. He wanted to keep the information stored therein from falling into the wrong hands. Superman instead buried Auron on a nearby asteroid, wishing to respect Auron’s sacrifice with a monument rather than obliterate his remains.

A salvage operator unearthed Auron’s body after Superman left. He took the on-board computer as a possible trade item. The salvage worker traded the “primitive binary” computer with a bartender/fence for a drink, with neither realizing the value of the contents.

Based on Jim Harper’s DNA, Auron has the same build and facial features as the adult Guardian.

He is covered with a gray integument, supplemented by golden gloves and boots. His upper shoulders and head are covered by a formfitting golden layer. This overlay obscured Auron’s features slightly, so that his resemblance to Guardian was not immediately apparent.

Auron speaks with a soft mechanical timbre that still conveys some of Jim Harper’s voice tones.

At first Auron’s personality was very limited. He conveyed facts in a direct manner and followed orders without question. However, elements of Jim Harper’s personality quickly asserted themselves and he thereafter behaved in a very altruistic manner, to the dismay of his creators.

Auron’s reasons for leaving Earth and exploring the stars were never fully explained. It is possible Auron wished to distance himself from Project Cadmus lest they find a way to reassert control over his mind. Auron considered himself the guardian of Superman’s legacy. He promised Guardian that he would return if necessary to further that cause.

When Auron was fatally injured, his greatest concern was that Superman destroy his body to prevent Superman’s DNA code from falling into the wrong hands.

“Only a small part of me is Jim Harper… the most important part. You boys reminded me of who I was… who I am… just in time.”

“We will never be far from each other’s thoughts, Guardian.”

Drawbacks:
Miscellaneous (Auron is solar-powered and will eventually shut down if totally deprived of light ; it is unknown how long Auron can operate in total darkness, but even starlight in interplanetary space was sufficient to keep Auron fully charged).

Equipment:
JET-PACK [BODY 14, Flight: 40, Hypnosis: 08, Data storage: 06, Limitations: Hypnosis can only be used on Auron and only to enforce the commands of Project Cadmus Director Westfield (-3FC)].

Source of Character: Legacy of Superman one-shot and Adventures of Superman #509 (DC Comics). 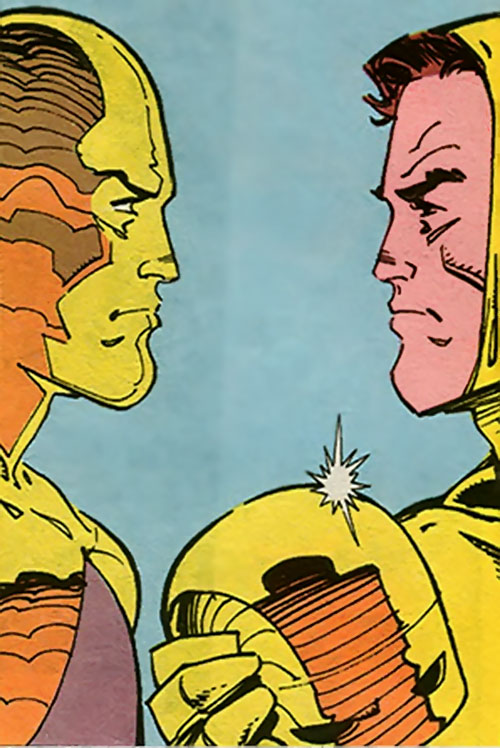 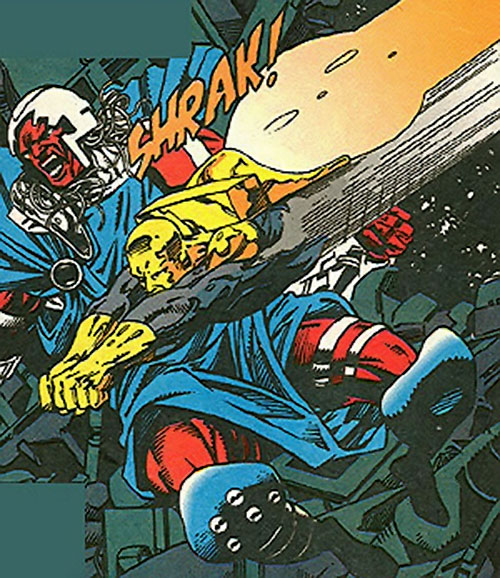