Avalanche is one of the signature minor X-Men opponents. Especially during the 1980s, though he remained a frequent presence in X-stories in subsequent decades.

(The aborted Ms. Marvel storyline was eventually published in 1992).

This profile is meant to be read after :

For now, it covers the same span of time (1979 -> 1991) as the two team profiles. Since they were written simultaneously.

Avalanche seems to be in robust shape.

He has significant superhuman combat experience, and seems quite determined.

He’s knowledgeable about landscaping and gardening.

He received training in parachuting, and likely other military skills.

Avalanche’s costume is armoured. Over time his helmet came to cover his entire head, including a full visor. 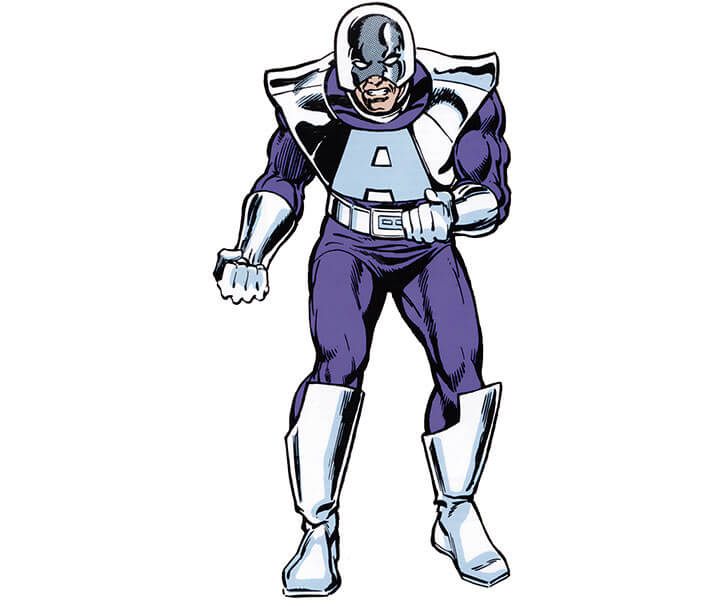 His mutant abilities is to emit waves of energy from his hands :

Avalanche is powerful enough to collapse tall buildings. Though technically this is done by attacking the lower floors and letting fiendish gravity do its dirty work.

His tactical role is more about battlefield control, and keeping the opposition bowling around and unable to act.

He also sometimes provides mobility – such as making the Blob surf on a fast-moving wave of earth for a frontal attack.

There’s a weak case to be made for Avalanche having a minor healing factorThe power to heal wounds and regrow tissues, like Wolverine. Though if he does have one, it doesn’t seem to work on self-inflicted damage from his powers.

What happened is that he appeared in two storylines published on the same month. With the grave wounds suffered in Uncanny X-Men #255 being already gone by Avengers #312. There was an off-hand comment about him having already healed, though the wounds are later shown to have reopened.

There have been mentions over the decades of homo superior mutants frequently having abnormal power of recovery. So let’s err on the side of generosity for a change.

Bewildered by the Black Blade of Baghdad

Avalanche was once struck by this magic scimitar, but didn’t seem too badly wounded.

This led to a curious statement from the demon Raazer (Uncanny X-Men Annual 1991) that “either his armor deflected the mystical properties of my blade, or the man believes his soul is already consigned to Hell”.

There’s too little data to draw any conclusion. But the flow of the story does imply that Avalanche believes himself, Blob and Pyro to be irredeemable.

If so, then it’s simply a personality trait (and a limitation of the Black Blade) rather than an asset of Avalanche’s.

Dominikos Petrakis is a natural homo superior mutant, from Crete  . He grew up during the “dictatorship of the colonels” years  .

He seems to have a background in gardening, horticulture, landscaping, orchard farming, or some related job(s).

In unchronicled circumstances, he was recruited by Mystique to join her first Brotherhood of Evil Mutants.

For the bulk of events during this span, see the corresponding Brotherhood of Evil Mutants team profile.

Avalanche escaped shortly after Mystique and Rogue (Anna-Marie NLN) failed to get the Brotherhood out of Ryker’s Island prison.

He blackmailed the LAX airport  , destroying the tarmac as planes landed. This seemed to be a quick and easy way to make millions, as there were few super-heroes in California back in ’81. 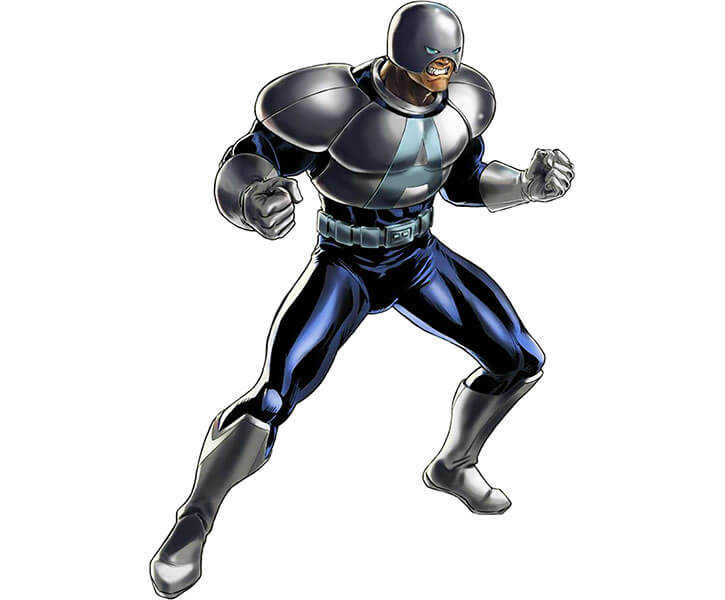 But Landslide of the Outcasts responded. He feared that the small earthquakes caused by Avalanche would tectonically destabilise California.

The fight devastated the airport. Especially after the incredible Hulk (Bruce Banner) intervened.

Avalanche defeated Landslide, but was overwhelmed by the Hulk. He attempted a direct attack against the jade giant, but the feedback shattered every bone in both his arms.

Avalanche thus couldn’t help much during the Windust Prison escape attempt. He tried to, but with his wounds the effect went out of control and he passed out from pain.

During most Freedom Force operations, Avalanche simply did his job in a mostly disciplined and semi-competent manner. See the Freedom Force profile for more.

Still, during the 1991 Kuwait defeat, he gave the order to abandon Pyro and Blob to save the Crimson Commando. 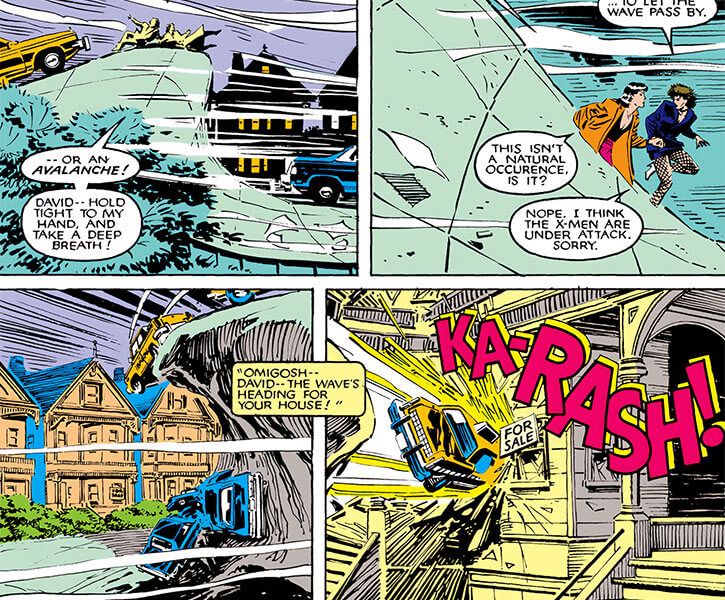 As often, Avalanche’s hair colour has been all over the map.

His costume also fluctuates to a notable extent. Perhaps he kept looking for the sweet spot between protection, and ease of movement and perception.

Avalanche seems to be more of a mercenary than a mutant rights activist – or a mutant supremacist. He will fight for the cause, but he wants to get paid. And he remains on the lookout for lucreMoney, especially when regarded as sordid or distasteful or gained in a dishonourable way..

Petrakis is greedy. He can control himself, but if there’s a lot of money to be grabbed and he cannot grab it, he’ll feel terrible. He has a definite criminal mentality, but enough discipline to force himself not to commit crimes if that’s in his rational interest.

He seldom talks much, and his usual behaviour evokes that of a passable soldier. Frex he usually was serious about following Mystique’s directives, whereas Pyro or the Blob were always on the lookout for ways to abuse their power or commit crimes.

Petrakis seems to have esprit de corps  . During a clash with the Avengers, he even shows concern for the Scarlet Witch (Wanda Maximoff), once a Brotherhood member.

He seems to be very much into gardening and landscaping. This apparently brings him genuine solace.

During the Kuwait disaster, Avalanche gives the order to leave Blob and Pyro behind in order to save the Crimson Commando. He then comments “they’re not worth it”.

Since this comes minutes after surviving a blow from the Black Blade, there’s an implication he considers himself and his two comrades as worthless and damned. 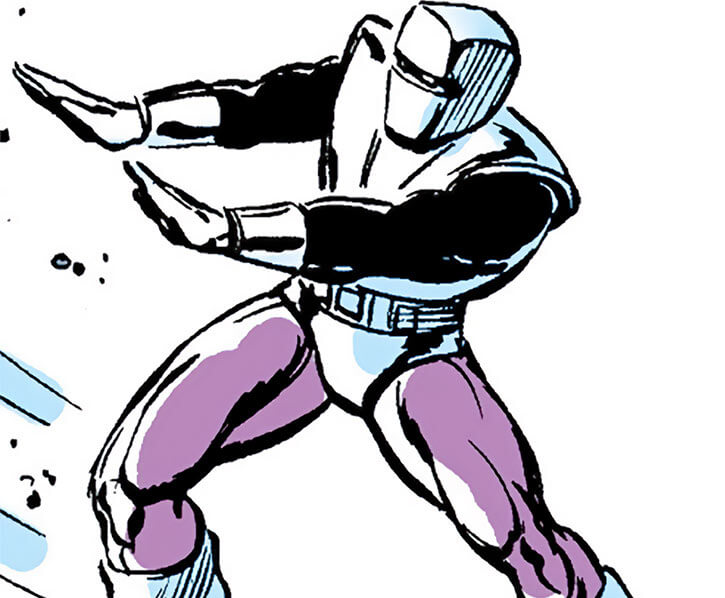 Misc.: Avalanche is a mutant. 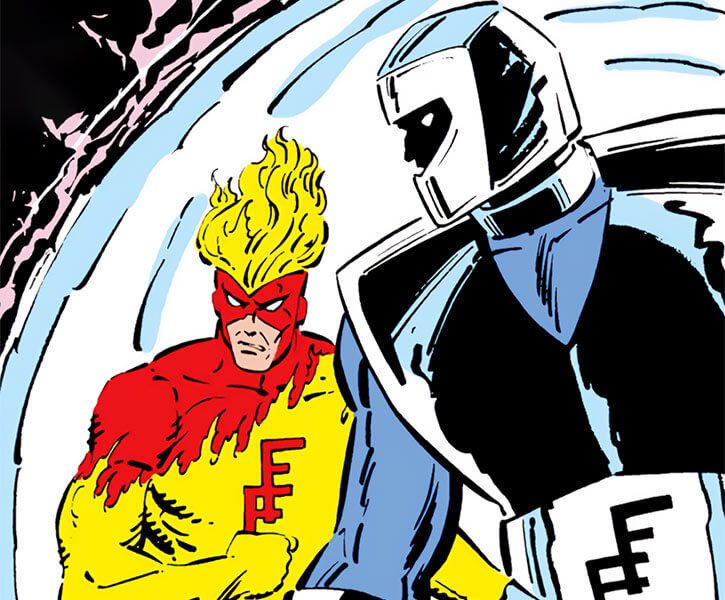 The Blunting on the COSTUME is arbitrary. It makes sense, but it’s minor and undemonstrated.

The CLOSED HELM COSTUME also has a bit of extra verbiage about Structural damage. To help model the fight against the Hulk at LAX.

The Water Control could easily be treated as a Trick Power. But I’m not enthusiastic about assuming that low-Hero-Points characters such as Avalanche will do HP-hungry effects under ordinary circumstances.

The military Familiarity is on shaky ground (so to speak). He only demonstrated a familiarity with helicopter gunships, and parachuting. But Greece does have mandatory military service. 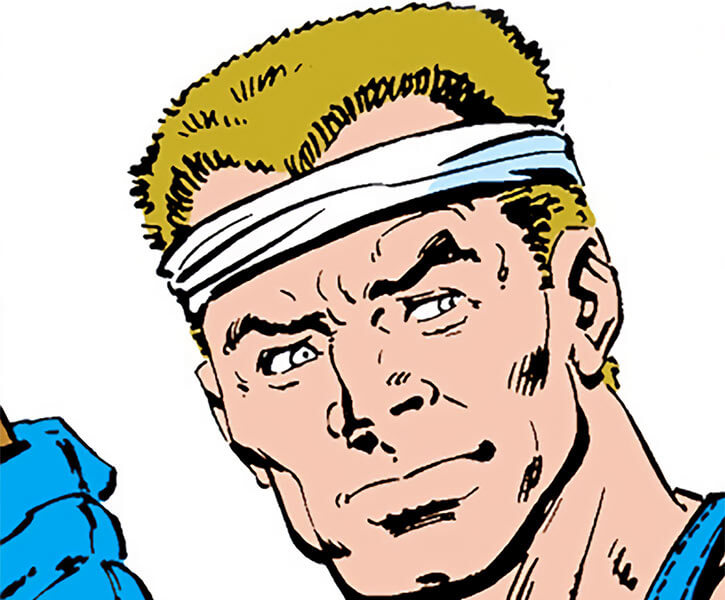