The Avenger was the stereo-typical Red Menace fighter in the 1950’s. An experienced brawler, skilled scientist, he knows people all over the world, can get anywhere he needs to be pretty quick (via Starjet) and has a gun that can put a hole in a tank.

His methods may be a bit dated, by they still get the job done.

He will never use his Dissolver Gun directly on a living person unless in a kill-or-be-killed situation.

Roger Wright was a wealthy scientist/explorer/superhero in the early 1950s. When his older brother and his wife were tortured to death by Russians in 1949, he swore to avenge their deaths.

He developed the identity of the Avenger and built the amazing Starjet and his Dissolver Gun. He fought the Red Menace at home and abroad. Thanks to his father’s political contacts, the Avenger reported directly to the President himself.

However, during the course of his adventures, Roger was exposed to a heavy dose of radiation and developed inoperable cancer. The disease began sapping his health. Thus, when he learned of the Vault project he jumped at the chance, hoping to find a cure in the future.

In 1990, Nightveil discovered that the Avenger was actually her older brother Roger. She created his mystic shirt to keep the cancer at bay. The Avenger has been an active member of the Sentinels of Justice ever since.

The Avenger wears a red body suit and mask with white gloves, boots, and belt. He has a white circle with a red “A” in the center of his chest.

The Avenger is your basic square-jawed, two-fisted, crime-fighting, brilliant, loyal, patriotic defender of democracy. All that’s missing is a cape, superpowers, and a big red “S” on his chest.

The Avenger has acclimated to the future more quickly and efficiently than many of the Vault Heroes and is living life to the hilt once again. He’s got a great girlfriend (Miss Masque), is reunited with his sister (Nightveil), and is on a good team with great teammates. Life is good.

“Of course you can count on me, Mr. President !”

Most of the Sentinels are Vault heroes, heroes from the 1940’s and 1950’s. They willingly entered suspended animation to wait until they were needed again. The Vault heroes were activated during the Shroud War and have been trying to adapt to the future ever since.

In the DCU, the Vault heroes can be Golden Age heroes (just add them to the already immense JSA roster). Like Femforce, they could be an arm of Task Force X, perhaps operating under the command of Sarge Steel. 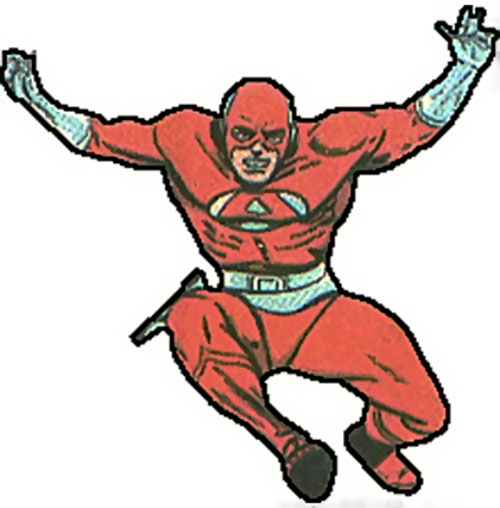