A star-studded series of BOOK-LENGTH SUPER-EPICS featuring some of Earth’s greatest super-heroes !

With all the big Marvel movies, the Avengers need little introduction.

Our sequence of team profiles goes :

It is presented in two chapters, for the sake of readers on smartphones.

These team profiles use our “emergent history” approach. Therefore, only material published during the 1963-1965 span gets considered.

It’s the vintage, as-published-back-then, no-sliding-time  -no-retconsMaking changes to a character or story after the fact. version of the Avengers.

At this point, the Avengers also take on garden-variety organised crime in and around New York City, in the absence of a more pressing need. But these aren’t normally chronicled in the comics.

Modus Operandi:
The Avengers either react to attacks, or hold meetings to decide which problems to solve/menaces to stop.

Extent of operations:
All of it, mate.

Bases of Operations:
The Avengers hold their meetings in Tony Stark’s town mansion’s library, in the Upper East Side of Manhattan.

It gradually becomes a HQ for the Avengers as their activities intensify. We’ll discuss that below.

The Avengers also have a secret, camouflaged base in woods not far from New York City.

Major Funding:
There is no budget early on. Tony Stark provides ad hoc facilities and vehicles when needed.

After that, it is strongly implied — but not stated — that Stark Industries is bankrolling Avengers operations. That includes supporting Captain America, who doesn’t have an income yet.

Organisational structure:
The early Avengers simply are a group of allies, coordinating their efforts.

A rotating chairpersonship is then created – see below.

Thor also mentions that there are “certain tests” and a period of trials. From what we saw when Captain America joined, an important part of the tests might be regular sparring with active members. To establish battleworthiness.

When Hawkeye (Clint Barton) joins, Iron Man announces that he’s been vetted by the Federal Security Agency (???). This may have been meant to be an FBI check. But it’s unclear how Hawkeye would have passed that, given his background.

Something from 1963 for that chronologically correct atmosphere, lessee what’s in my MusicBee library…

For some reason the Rooftop Singers’ “Walk right in” stands out. It was one of that year’s notable hits.

As often, this hit was a cover of a song created by Black musicians, Gus Cannon’s Jug Stompers. “Jugs” was late 1920s slang for ordinary items converted into musical instruments using DIY means.

The Avengers have basic procedures to contact each other in an emergency. Though early on it’s often the Teen Brigade who does much of this comms work.

The procedure quickly incorporates secret information, such as “contact Dr. Donald Blake to summon Thor”. To compensate, the Avengers pledge not to pry into each other’s personal life and secret identity.

There’s an implication that the early meetings are held weekly, but it’s flimsy. By the third issue the meetings are stated to be monthly, but that doesn’t really work with the flow of events in the books. Perhaps it’s once every two weeks ?

When there’s no menace or issue to handle, the meeting is just spent socialising.

With Avengers Vol. 1 #7, we learn that there are formal rules.

If such rules are broken, the other Avengers will form a special board of inquiry, and collegially decide on a penalty. It’ll usually be a brief suspension.

The known rules at this point are :

In September of 1964 (cover date), we learn that there has been a rotating chairpersonship for some months.

Though it’s deemed “more democratic”, the chairperson’s main role is just to conduct the meetings. They don’t even get a gavel, though in Thor’s case that’d be redundant.

As this era closes, Iron Man mentions that there exists a manual with the Avengers’ by-laws.

The Avengers also maintain a fund to pay for the collateral damage they cause.

It presumably was set up by Tony Stark. And there presumably is an administrator who, say, liaises with the Mayor of New York City  – where most of the damage occurs.

One aspect of early 1960s Marvel characterisation plays an important role in both :

Namely, most characters act as eager, overcharged, young men who focus on swinging their johnson around.

That’s in no small part because there’s a de facto cap of one woman per team  . The Wasp can thus end up in the role of peacemaker and voice of reason, but it’s not a card she can play too often.

This characterisation means constant and pointless clashes of egos. Which will usually escalate into minor physical confrontations.

In the last few pages of this era comes the first mention of the Avengers having a special identification card. It carries “A-1 priority” when requesting aid from the US government.

It is used by Cap to request being flown stateside by US armed forces abroad.

But the procedure seems recent. The general receiving the request has to call the State Department  for specific instructions about this “A-1 priority”.

On the other hand, back during World War Two, the Invaders also were granted a “Priority A-1” badge. So it is possible that the procedure wasn’t “recent” per se – but rather, had fallen into disuse. 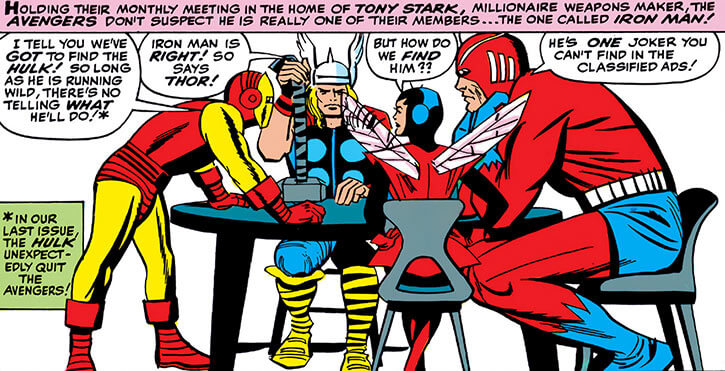 The early Avengers borrow specialised vehicles — say, a submarine — from Stark when necessary.

Other specialised gear (say, diving equipment or small construction gear) can also be brought in by Stark with negligible effort.

(That it’s Stark’s stuff isn’t clearly stated in the material, but it’s the likeliest hypothesis. Still, it is possible that some bits came from Pym’s lab instead).

Members are also issued short-wave radio receivers so they can be summoned in an emergency.

Get to da choppa !

By the Spring of 1964, the Avengers have their own helicopter. It even has stylised “A” logos on the sides. Sometimes.

This “whirlybird”, as people said back then, is also equipped with a long-range radio.

This helo is drawn with distinctive late 1940s Sikorsky lines – a mix of Sikorsky H-5  and Sikorsky S-52  . Which would have been an odd choice, since this helicopter likely was a six-seater (unless Ant-Man and the Wasp did the entire flight at microsize) and seemingly did a 2,000 miles (3,220 km) flight.

(In its second appearance, the helicopter becomes markedly larger). 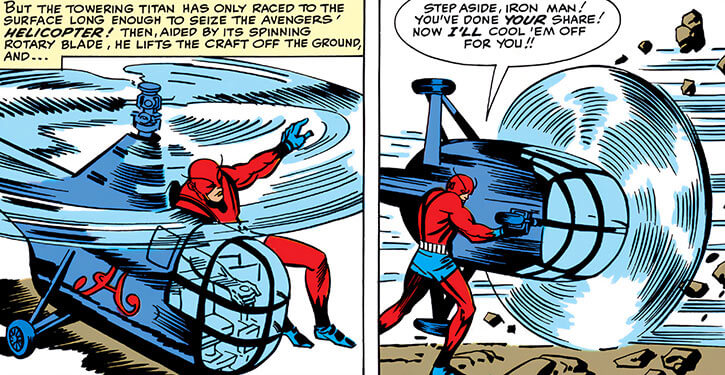 The first depiction of the helicopter.

As it happens, the French Alouette III  (FAA-certified in 1962) would be a surprisingly good match.

It visually resembled older Sikorsky helos, it was a seven-seater, and it was a reliable and well-regarded design.

One gets the impression that this helo was loaned by Giant-Man, and that he usually pilots it. Which also means that the Avengers don’t have their helicopter when Giant-Man is using it.

If so, it is presumably parked near Pym’s lab in the Palisades, near the Hudson River.

One caption describes it as a “jetcopter”. Two possibilities :

This aircraft lasts for mere months. It is soon destroyed by Thor, then under the control of the Enchantress. Damnit, Thor.

As this era brings to a close, the Avengers are seen flying a sci-fi aeroplane.

It seems similar to Reed Richards’ “pogo plane”. That is, it can do rapid transcontinental flights as well as vertical take-offs and landings. Perhaps it was a Richards prototype, bought and enhanced for long-distance flights by Stark Industries.

On caption indirectly states that this craft does Mach 22.5. That’s about as fast as the top speed achieved by the Discovery space shuttle (in DC Heroes TTRPG terms, Flight: 14).

One caption mentions the “vast resources at [the Avengers’] command”. Which echoes previous occurrences where the Avengers could charter fast aeroplanes within hours.

This all *suggests* that there exists a budget for fast air transportation. Which started with chartered planes, then was used behind-the-scenes to acquire more permanent transportation assets after the Alouette was destroyed. 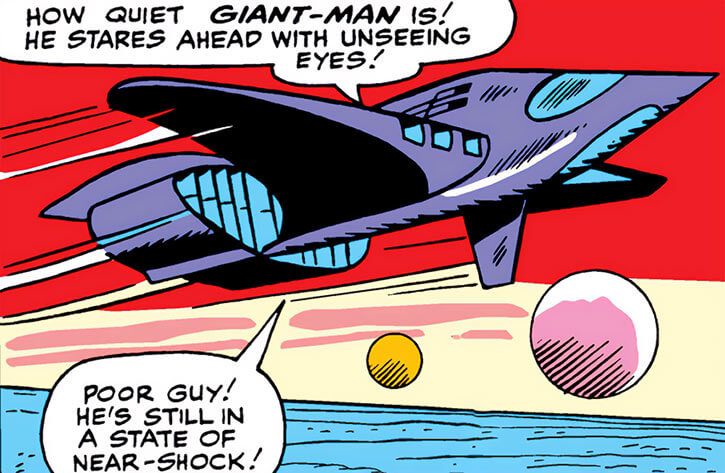 In the very next issue, Iron Man requisitions Stark Industries’ XL-750 Hunter rocket plane. It seems to be a prototype long-range, high-speed fighter-bomber with a tail-less delta wing  silhouette.

(Perhaps the “pogo plane” from the previous issue was undergoing extensive post-deployment maintenance).

The XL-750 can do “many times the speed of sound”, has vast fuel tanks, and its ordnance includes air-to-ground rockets. And that’s all we know about it, mate.

Money’s too tight to mansion

Over 1963, the Avengers use Stark’s town mansion’s library as their meeting room.

But over 1964, they increasingly use it as a base. Before the end of the year, Stark therefore donates the building to the team.

The luxurious mansion is run by its butler, Edwin Jarvis. At this point, Mr. Jarvis has but a few lines and no meaningful characterisation.

Even before Stark donated it, the mansion had good security – by 1960s standards. It seemed to primarily be electric eyes triggering remote video cameras.

But in late 1964, Bull and his squad have little apparent difficulty in invading the Mansion. The simplest hypothesis is that the security hadn’t yet been installed after the Hulk damaged the building during a Manhattan rampage.

Yet in May of 1965 (cover date), Hawkeye also has little trouble breaking into the mansion. So that’s weird. Perhaps he had special intelligence from previous work with the Black Widow (Natalia Romanova) ?

There also was some basic equipment, such as a radio receiver.

Starting in Q1, 1964 this gradually becomes a fully-equipped comms room. With a small PBX  (operated by the Wasp, of course), then a secure closed-circuit camera feed with key partners such as the Pentagon and the Fantastic Four.

Hold on to your fez, true believer ! It is now time for you to follow the Merry Marvel Marching Society as we sashay into the next chapter !

Which recaps the events during that span of Avengers history.