This is the second chapter of a series, which starts with this article.

In 1963, the evil AsgardThe reality of the Old Norse gods, such as Thor. god Loki sought revenge against his brother Thor.

For that he needed a menace great enough for Thor to manifest. And so he framed the Hulk (Dr. Bruce Banner).

(“Ham” (amateur) radio communications was a popular hobby among technically-minded folks during much of the XXth century. It still felt cool in 1963, being the sole means of personal long-range real-time communication).

(By this point of Marvel history, the FF were the main super-team. The only alternative would have been the early X-Men).

Loki magically diverted their broadcast, to warn Thor instead. However, the message was also accidentally received by :

Thor quickly realised that this all was dastardly Loki’s doing. He left for Asgard to hunt him down.

The others didn’t. They located the Hulk, but he fled. Iron Man gave chase, seeking to force a fight with the brute.

However, Thor returned with a captive Loki. This proved that the Hulk wasn’t to blame. Loki nearly escaped, but Ant-Man captured him.

Ant-Man and the Wasp then suggested that they all form a team. The Wasp — who I suspect also was the one who had the team idea — named it “the Avengers”.

(The caption underneath breathlessly declares that the Avengers were “brought together by a strange quirk of fate !”. This wording is still occasionally referenced when describing the team). 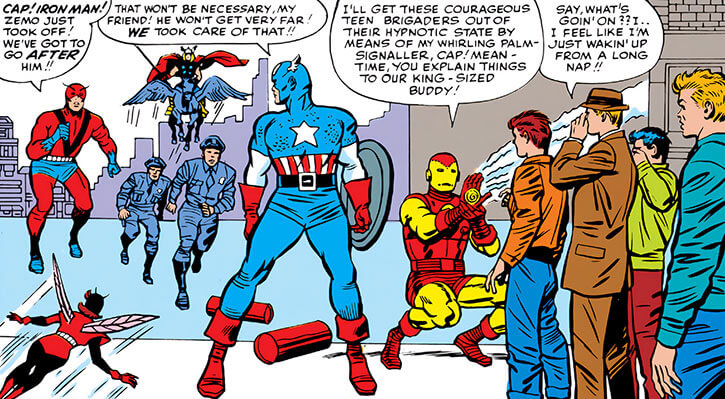 The dialogue vaguely implies that there were several unchronicled meetings and adventures.

The team was then attacked by a Space Phantom. This alien invader used his impersonation powers to trick the Avengers into fighting each other. Though he was eventually defeated, the infighting led to the Hulk’s departure from the team.

(At that point, the Space Phantom is just a 1950s-style space invader. But since he was such an early Avengers foe, the Phantom was later developed to become a part of the Immortus/Kang “branch” of the Avengers mythos).

Clashes of the titans

The Avengers then made a ham-fisted attempt at reining the Hulk in, hoping he’d rejoin.

The gamma giant fled, but Namor the Submariner then recruited him to attack humans. Starting with the Avengers.

This failed. But not by much, and mostly because the Hulk unexpectedly reverted to being puny Banner. 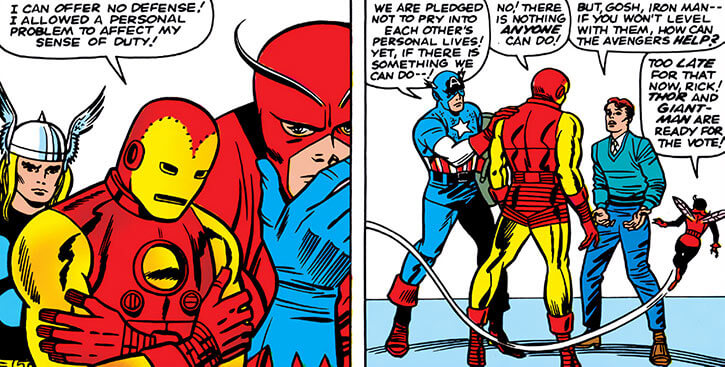 While patrolling undersea to locate Namor, the Avengers stumbled upon the frozen Captain America (Steve Rogers). He soon thawed.

Meanwhile, Namor allied with Vuk of the D’Bari. He forced this stranded space alien to turn the Avengers into statues.

Cap convinced the alien to depetrify the Avengers. In return, the team recovered his spaceship, which had been stuck into the sea floor for millennia.

Namor and an Atlantean platoon then attacked. But the Avengers — primarily Thor — forced these back.

In the wake of the battle, the Avengers asked Cap to join. He said yes.

(Neither Cap nor Namor recognise each other, since the wartime Invaders thing wasn’t in-continuity yet. In-universe, we can assume that neither man had fully recovered his memory at that point).

The Hulk then rampaged in Manhattan, wrongly thinking that Rick Jones had betrayed him to the Avengers.

He also wrecked part of Stark’s home whilst looking for them.

Much of the early conflict was a series of brawls between the Thing (Benjamin Jacob Grimm) and the Hulk. But the other Fantastic Four, the Avengers and the National Guard then got involved.

It was Jones who won the day, by tossing a gamma-absorption capsule into the mouth of a stunned Hulk.

The world is lava

The devious priest Jinku of the Lava Men then convinced his King to attack the surface world.

To that end they deployed a super-weapon, the Living Rock. This unstable, ever-growing mountain would explode with such force as to ravage most of Earth’s surface.

The Avengers managed to dispose of the Living Rock with the unwitting help of the Hulk.

During the Summer of 1964, Baron Helmut Zemo learned that Captain America had returned.

Still craving revenge after 19 years, the Nazi assembled a team from Avengers enemies :

Thus were created the Masters of Evil. There would be many versions of the Masters, plaguing the Avengers for decades.

The Masters raided Manhattan using sprayers of Adhesive X, and trapped the Avengers. However the heroes escaped. The Wasp then convinced Paste-Pot Pete (Peter Petruski) to provide a solvent for Adhesive X. 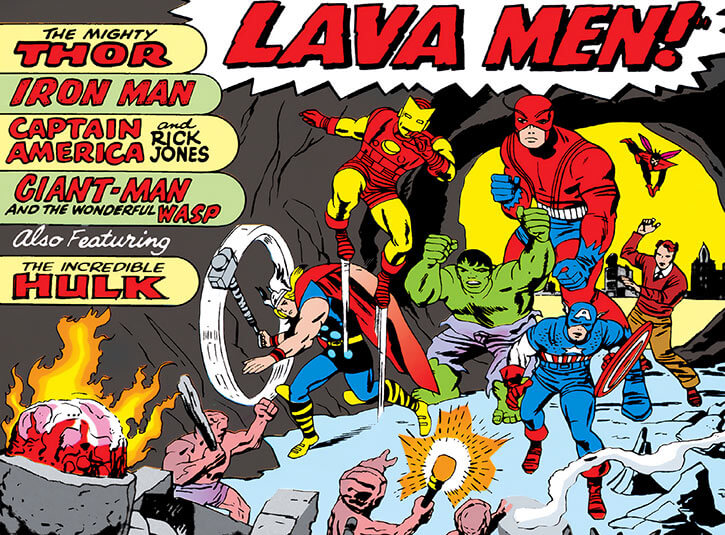 He soon allied with the Enchantress (Amora of Asgard) and the Executioner (Skurge of Asgard), for a joint revenge against Captain America and Thor.

Amora took control of Thor for a while. But she also messed up by allowing Cap to escape from Zemo’s death trap.

By that point, the Avengers were gelling as a team, and fighting in a much better-coordinated manner. They thus overcame their foes, and Thor banished the trio with a magic space warp.

In September (cover date) of 1964, time traveller Kang the Conqueror came in and announced that he was now ruling this era.

After Kang proved that he was far more powerful than the U.S. Armed Forces, the Pentagon called the Avengers in.

The Brigade freed the captive Avengers, and the Wasp returned with a special acid gun built by Pym. The Avengers thus forced the mighty Kang to retreat into the timestream.

The Mole Man (Harvey Elder) then attacked New York City. The Fantastic Four convinced the reluctant Avengers not to intervene, as he was holding the Invisible Girl (Susan Richards) hostage.

The Chameleon (Dmitri Smerdyakov) then tricked Iron Man and Cap into fighting each other. But Ant-Man and the Wasp deduced what was going on, and unmasked the Chameleon.

They recruited bankrupt industrialist Simon Williams, and turned him into the mighty Wonder Man. Williams was then sent to infiltrate the Avengers, so he could turn against them from within.

This wouldn’t have worked. But the Enchantress magically convinced the Avengers that Williams was suffering from a fatal disease. The team members therefore worked to save their new teammate.

Wonder Man captured the Wasp, and reeled them into Zemo’s trap. The four villains defeated the Avengers. But Williams couldn’t let the Avengers die, and sacrificed himself so they’d live.

Not long after that, Bull and his gang invaded the Mansion, after verifying that only Captain America was present. They were defeated.

Immortus then challenged the Avengers, using Rick Jones as bait.

(“Hercules” and “Merlin” were a generic form of those mythological characters, as opposed to the specific versions operating in the Marvel Universe. Decades later, it was established that all of Immortus’ fighters were Space Phantoms).

While Cap was away Zemo, the Enchantress and the Executioner seized the occasion to storm the mansion. They might have vanquished the Avengers, but Cap returned in the nick of time.

The Enchantress retreated by travelling back in time with her allies. This cancelled the chain of events. And so, from the Avengers’ standpoint, this encounter with Immortus never happened.

In December of 1964 (cover date), Tony Stark was reported dead. The Avengers suspended operations in mourning for 24 hours.

Iron Man was granted a leave of absence in absentia. Since the rest of the team assumed that he was away, investigating Stark’s death.

Kang the Conqueror seized this occasion. He sent in a robotic Spider-Man impostor, to seek Avengers membership. The robospidey lured the team to the ancient temple of Tirod, in Mexico.

The trap mostly worked. But the impostor was defeated by the real Spider-Man (Peter Parker).

Hope you guess my name

In 1965, Thor magically sensed great evil in Europe. The team therefore travelled to Bavaria to investigate.

The X-Men were already on the scene. They were in telepathic contact with their mentor Professor X (Charles Xavier). The Professor knew that the evil that Thor had sensed was his old enemy Lucifer of the Quist, whom he was hunting down.

Predictably, a brawl ensued between the two teams. The X-Men delayed the Avengers long enough for Xavier to arrange for safely defusing Lucifer’s planet-busting bomb.

Once Xavier telepathically explained what was going on, the two teams left on good terms.

Tell it to the ants, because the Avengers won’t believe you

Ants then warned Dr. Pym about the latest malevolent machinations of the Mole Man (Harvey Elder).

But all Avengers brushed him off, caring little about ants.

Ant-Man investigated alone. He confirmed the warnings, but was captured.

The Wasp used Pym’s devices to locate him. This led to a raid on the Avengers’ mansion by a Moloid commando team, possibly including the Moloid with a scooter gun. But these were defeated.

As the Avengers built a Stark digging machine to breach the Mole Man’s subterranean domain, Elder allied with the Red Ghost (Ivan Kragoff). But despite all their weapons, they were handed a clear defeat.

The team then attended Susan Storm and Reed Richards’ engagement party, along with a number of super-heroes. 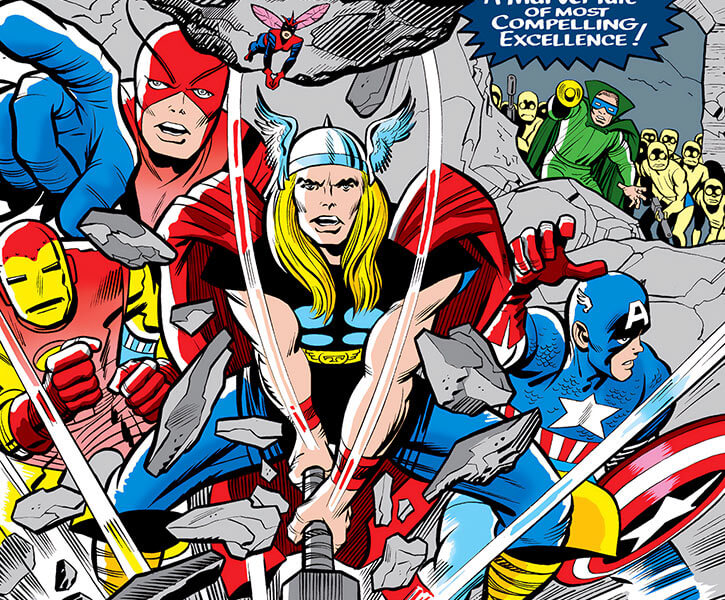 Meanwhile, minor Avengers efforts against organised crime resulted in losses for the Maggia. The immensely wealthy secret master of the Maggia, Count Nefaria, decided to intervene.

Nefaria had his ancestral castle moved to the New Jersey Palisades, causing a sensation. He then invited the Avengers to a big charity/society event for his full arrival.

All Avengers were trapped in trance-inducing rays. The Count then used his technology to create illusionary doubles of the Avengers, who announced that they were taking over the USA.

The Avengers, threat or menace ?

A national emergency was declared, and military mobilisation began. True to form, the public bayed for super-hero blood.

Nefaria then released the Avengers, who were still unaware that they had been in a trance. The military soon attacked them, and the flabbergasted heroes had to operate from a secret base.

Deducing what was going on, the Avengers attacked Nefaria’s castle.

The Wasp’s wound was nearly fatal. The Avengers needed a renowned Swedish surgeon to operate.

This led to the discovery of a secret Kallusian colony under the North Pole.

The space aliens briefly captured the Avengers, but the space armada hunting the Kallusians then entered the Sol system.

Return of the Masters

Zemo then kidnapped Rick Jones, while the Enchantress and the Executioner freed the Melter and the Black Knight.

The four Masters contained the Avengers for a time. All but Captain America, who flew a Stark rocket plane all the way to Zemo’s base in South America.

There, he rescued Rick Jones and confronted Zemo. The Nazi was accidentally slain during their showdown.

In the wake of this case :

The founders (well, minus the Hulk) agreed to disband for a time, and have new blood hold the line in the meanwhile.

Hawkeye was made a probie. While Cap was making his way back stateside, the founders went looking for potential recruits.

They even approached Namor, who haughtily refused. And Iron Man still thought they should convince the Hulk to rejoin.

The Maximoff twins applied. Curiously, both the Scarlet Witch (Wanda Maximoff) and Quicksilver (Pietro Maximoff) were allowed to join. Like Hawkeye, they had a less than glowing past.

Thus began the second Avengers roster. During the press conference announcing this, Cap uttered the “Avengers, assemble !” call for the first time.

There will eventually be a profile for the second roster.

Just… don’t hold your breath. Other groups who don’t have their first team profile yet have priority.