Lt. Barak was originally a limited inductive telepath. That is, he could “read” in his target’s mind the real, sincere answer to any question he asked.

After being fully activated, he could do a lot more, as detailed in our game stats. He is now a rather powerful telepathic and counter-telepathic warfare specialist. He could even take temporary control of Baron Chaos. Barak convinced him he had won against all StormWatch agents and that he could now relax and take his helmet off.

Avi Barak was born in Orange County, CA.. But when he was 16, his father and he moved to Israel as his father wanted to “go back to his roots”. Avi finished his teen years there, then joined Tsahal for his military service. While in the army, he was diagnosed as a Seedling  – a person with latent powers activated by a comet narrowly missing Earth a few years back.

Barak was sent to join Stormwatch, apparently back when it was still commanded by Henry Bendix. He served as a minor costumed operative code named “Seeker” aboard the Stormwatch satellite after having been activated by UN superhuman Synergy. After his UN tour of duty was finished, he came back to Tsahal as a trained inductive telepath.

Barak’s talents were useful in counter-terrorism and intelligence. However, a particular case came to weigh terribly on his conscience. At least 16 superhuman terrorists had been activated over the years by one of the few known activators of Seedlings apart from Synergy – Dhul Fiqar.

One of them appeared to have the ability to serially detonate and reintegrate himself. He was a serial suicide bomber nothing could detect. The bomber killed 238 people, mostly children. He hit eight schools, four preschools, five arcades and a children’s hospital.

Barak, desperately hunting him down, finally realized that the only way the terrorist could penetrate security was if he were a child themselves.

When he saw a familiar six-year-old boarding a bus, he intuitively realised it was the bomber. Barak shot him in the head in a moment of blind panic, refusing to admit it was necessary to kill a child even as he pulled the trigger.

He had hoped the kid couldn’t explode if he was dead. But the kid exploded on death, killing 39 more people – mostly kids. The blast also slew the other soldier who was manning the checkpoint and had attempted to prevent Avi from firing at the kid.

In shock over the carnage, Barak tried to shoot himself in the head. But the hand of his partner, severed by the blast, was still grasping his pistol and made it impossible to pull the trigger.

Some time later, the new StormWatch Weatherman, Benito Santini, asked for Barak to be transferred to his unit. From reading his file he knew that Synergy hadn’t fully activated Seeker, as there were serious risks of death on full activation. Santini told Barak they were after Dhul Fiqar, and Barak agreed to risk death on activation if that could help capturing the Seedling activator.

He has faithfully served Stormwatch since. Stormwatch did succeed in capturing and apparently eliminating Dhul Fiqar. Ironically, Fiqar turned out to be an innocent, pious, peaceful old man who didn’t seem to have any idea of the missions his activated subjects were tasked with.

During the Authority’s coup d’état, Santini had to take Team Achilles undercover with him. He would continue his mission even without UN support.

He told his two main support specialists, Lt.-Col. Grunier and Lt. Barak, that they arguably played a civilian role and would almost certainly not be hunted down by the Authority. Both chose to stick with him, though.

At first Avi Barak was an immature, way too curious, whiney brat. Due to Tsahal’s relaxed nature, he had to make an effort to show any military discipline. And he was mostly expecting the old Stormwatch – to be a super-hero aboard a super-satellite, not a military intelligence spook. He was swearing an awful lot, and mostly came across as a pampered Californian brat, not as a soldier.

Since he was fully activated and started to work with an elite military team, Lt. Barak has enormously matured. He’s now a crafty, assured professional who is confident in his considerable mental powers – both in terms of raw power, but also of dirty tricks and experience

While he’s only rarely in the field, he is a very valuable and motivated asset who is perfectly able to implement Santini’s tortuous orders.

He still comes across as a relaxed and colloquial Californian young man. But all traces of of his previous immature, whiney nature seem to have disappeared.

(Barging in Grunier’s office holding his ear as his earlobe as been cut off) “I’m bleeding to death here, lady ! I’ve been fucking mutilated here !”

(Crying) “Children ! The deliberate murder of innocent children ! And I couldn’t stop him fast enough. You know why ? I failed because I couldn’t get my mind around the idea that the only terrorist who could penetrate security at all those locations… was a six-year-old kid.”

(Using Hypnosis on Baron Chaos) : “But you’ve already killed us, Baron. Listen to my voice. You have won. You have defeated the worms. The worms are destroyed and you are now safe in your castle. Relax now in your triumph. Relax. Relax. You feel safe. Warm and safe. Safe enough to deactivate your armor and remove your helmet.”

Equipment:
Lt. Barak is not normally involved in field missions, and was never seen armed. Probable weapons if he were to take up arms are:

For this writeup the characters are still considered to be an UN team, since that’s their most likely use in a campaign.

Avi Barak has tremendously grown during his StormWatch days, and is now a powerful telepath. If for some reason you want to use him in his StormWatch days, back when he was a level eight telepath (the Wildstorm scale has level 1 as the highest and level 10 as the lowest) :

Since he was fully activated, Avi has become a quite powerful telepath. His specialty is apparently the construction of small mental constructs that look very much like the equivalent of a computer script or daemon.

He installed several of those in the minds of Stormwatch members, although only those he used to booby-trap the mind of Khalid Tefibi were seen in action. Tefibi was unaware he had mental programs hidden in his brain. Barak likely had deleted the memories of the implantation to keep them covert.

To build his mental routines, Barak uses the Telepathic warfare Skill. This Skill works pretty much like Gadgetry. However, its point is to design mental constructs instead of technological Gadgets.

The Telepathic Warfare Skill can only build “gadgets” that have Mental Attributes (INT, WIL, MIN) and/or mental powers. However it doesn’t require Wealth rolls at any point. The routines cannot be Taken Away, but receive no cost break for this.

A given subject cannot have a number of routines in his brain greater than his APs of MIND.

The mental daemons are much like a small artificial intelligence. They wait for a trigger condition to happen, then run their instructions

The first two routines he had implanted in Tefibi, and presumably other Team Achilles members have the following stats : HOSTILE TAKEOVER ROUTINE (x2) [INT 02 WIL 01 MIN 01, Personality transfer: 10, Mind blank (itself): 06, Catastrophic Irrational Attraction to killing all hostile personnel and then commit suicide].

The first such routine had a trigger condition of “hostile telepathic contact such as Mind Probe, Mind Blast, etc.”. The second was triggered by “the first routine was triggered within the last two hours, and hostile physical contact with the host happens”.

The rest of the time, they used their built-in Mind Blank to hide themselves in Tefibi’s mindscape. This concealment was made easier since opponents assumed Stormwatch only had very minor telepathic talent on roster, and did not know Barak now could booby-trap minds.

The Hostile Takeover routine, once triggered, aggressively Personality Transfers itself into the aggressor. Note that since it is a Gadget-like object being wielded by a Character, the host (in this case Tefibi) can use his Hero Points to help the routine.

If the PT is successful, the routine takes over the aggressor’s brain and goes into action as its CIA kick in. The range of possible actions is chiefly limited to acts of extreme violence, presumably to “save space” and end up with less “code”.

The routine incorporates a duplicated fragment of Barak’s personality. Since it has full mental Attributes, it posses a sort of limited sentience and can chat a bit, help the team member with a few simple actions (such as untying them) using the body it is currently possessing, answer basic questions, extract useful information from the mind of the person it is possessing, etc.

However, it will soon commit suicide by shooting the body it is occupying (or killing it by any other available means).

The second Hostile Takeover routine is more of the same. It “jumps in” and possesses a hostile person touching the subject, then uses the body to wreak maximum carnage among opponents. The second routine includes a short warning to the StormWatch operative about the third routine.

According to the second routine, the third routine in Tefibi’s brain was something like [MIND 05, Mind blast: 10]. It was intended to wipe out Tefibi’s mind for obvious security reasons.

Barak “uploads” data in the bot using Mind Probe, and the bot can navigate around minds using Telepathy. When he did this, he had the bot, full of stored complex memories, migrate to Jaeger Weiss’ mind. Weiss apparently couldn’t access them, so they were probably “zipped” by Barak.

Avi later moved them to another mind for “unzipping” and retrieval. 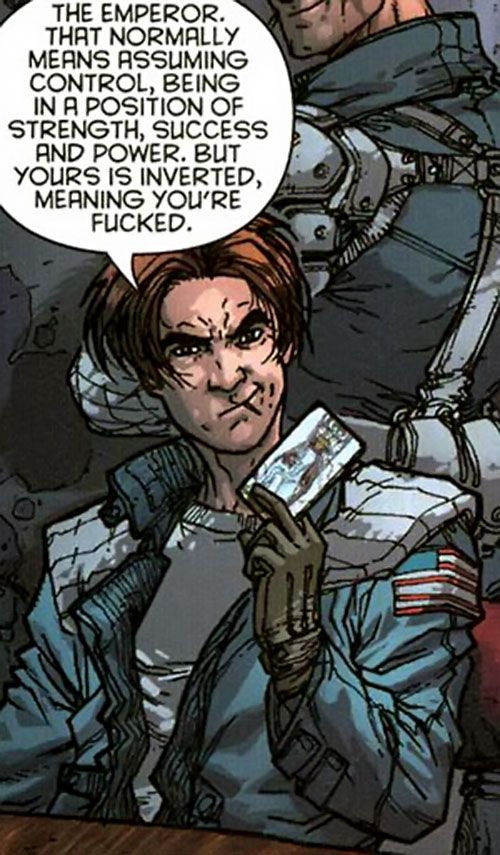