The “Awesome Replicoid” is a strong, durable android. When assaulted, it will split into a number of robots matching the number of his opponents (up to 6). Then the Splits will manifest different abilities as they morph  into more specialised forms.

At first they will seem to roughly mimic their opponent’s abilities (sword-hands against Citizen V’s blade, growth against Atlas, etc.). But this is a decoy – they can actually use whatever is more tactically appropriate. They seem to like bladed appendages, but will often grow wings, lightning projectors, stretch their limbs, etc..

The mass to do all that is presumably summoned extradimensionally.

The “Awesome Replicoid”is an example of a good Thinker android for the late 1990s or early 2000s. It was deployed against the Thunderbolts during a kidnapping attempt on Franklin Richards, shortly after the Onslaught incident .

The X-Factor that foiled the Thinker in that case was that the supposedly rookie heroes, the Thunderbolts, were actually the quite experienced and very well-led Masters of Evil.

None. It just… punctuates.

Drawbacks:
MPR (Will cease to function if the Thinker or his nearest android body is incapacitated). 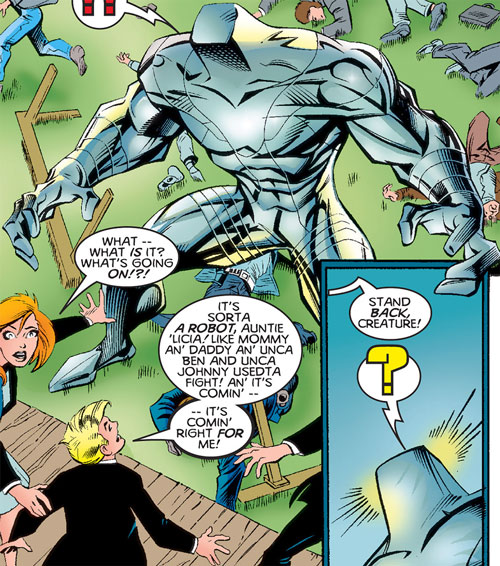