Awol (the acronym for “absent without a leave”, usually meaning a deserting soldier) is part of an obscure quartet of very minor villains. These appeared in DC’s 1996-97 series Aztek the Ultimate Man by Millar and Morrison.

There is barely enough information about them for a profile. But we picked them anyway for RPG gamemasters who prefer to develop their own villains based on thin published material. This is often done by people who’d like to have art to work with, rather than doodle something.

Awol seems to be a muscular, trained infantryman. But there’s nothing to write home about.

Awol is a constant whiner and not cut out for combat duty. While he wished he was a big bad supervillain, he actually panicked when Aztek went through his team like a lightsaber through butter, and eventually seemed to pass out from shock.

“I never went AWOL in my life. I’m not even a vet. The closest I’ve come to a war zone is watching Hamburger Hill  on video. I’m fed up being an hypocrite. Why can’t we just be cool, like the Teen Titans ?”

Awol’s customization angle is that, while he likely has a weak superhuman power (around 5APs) like everybody else in the group, he has not demonstrated any. Pick one that sounds appropriate to the encounter you have in mind.

If you have no idea, my suggestion is Teleportation: 05 (allowing him to ’go AWOL‘, in a way) with a Fatiguing Limitation that is tested *before* he can actually teleport. Thus explaining why he passed out in front of Aztek. 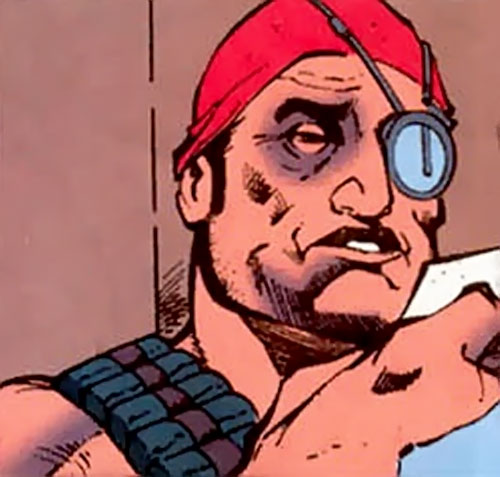